NB. Later models, some early T25s only have the low pressure wiring.

The low/low pressure warning operates from the low-pressure switch on the engine. On diesels this is mounted on the forward-facing end of the head; on petrols it is mounted under the LH cylinder head.

The high/low pressure warning operates from the high-pressure switch. On diesel this switch is mounted on the top of the oil filter housing; on petrols it is mounted near the water pump housing (quite a confined space for access)

The low-low pressure switch information is used up to ~ 2250 rpm. At this point the electronics in the PCB switch to the high-low pressure switch. This sensor switch is present in later vans whether there is a rev-counter fitted or not. It is also common to other VWs of this era.

The flashing oil pressure light is operated alone by the high-low pressure switch and hence at engine speeds of over 2000~2250 rpm.

The flashing oil pressure light and 'buzzer of doom' are operated by the low-low pressure switch, hence at lower engine speeds.

These two conditions have both been observed in diesel-powered T25s, NOT petrol-powered variants, which *MAY* be different. (Edited: They are basically the same - HM)

The warning light and buzzer can be tripped under hard deceleration, and also climbing very steep hills with tight bends, especially if there is low oil level in a diesel. Sometimes a high oil-level on 52 degree canted-over diesels (overfilled, more than 4.5 litres) can cause frothing after high-speed running and bring on the buzzer or flashing light when slowing down or decelerating through 2000 rpm.

If the high/low buzzer goes when slowing down, on an engine with chronic low oil pressure, the rpm at which it triggers can be an indication of how thin the oil is (how hot!) e.g. 2000 rpm, just about being triggered; 2500 getting worse; 3000 rpm bad, oil pressure very low at speed due engine condition or overheated oil (usually combination of both).

Typically the low/low is set at about 0.25~0.3 bar, depending on vehicle and switch (colour) code.

Typically the high/low is set at about 0.9~1.4 bar, depending on vehicle and switch (colour) code.

ETKA (the VW parts counter software) lists these sensors and their pressures and colour codes for your vehicle:

NB. Turbo diesels can often benefit from a separate oil-cooler.

Rear-engined vehicles suffer from less general block, sump and accessories air-flow and cooling than front engined vehicles and by nature their engine compartments can reach higher temperatures. This can have an effect on oil temperatures which carries across to oil pressures.

Most T25s have an oil/water heat-exhanger, the sandwich between the oil filter housing and the oil filter itself. This warms the oil quickly from a cold-start, and cools it when the oil is hotter than the water temperatures - but not anything like as much as a bespoke air/oil cooler radiator. The water and oil pipes feeding this need to be clean and unrestricted for maximum heat-transfer.

Low oil pressure warnings can be a result of a malfunctioning DOPWS (the circuitry in the speedo dash pod or the sensors going out of spec.) but it has to be said that these engines when old or poorly maintained can develop congenital low oil-pressure - so don't ignore the DOPWS unless you are sure the system is malfunctioning. The only real test is to install an oil pressure gauge, for a temporary check (at the high/low snesor port) at both idle and above 2000 rpm (ensure you run it hot by driving for a while before taking readings). Best of all is to fit a dash mounted oil pressure gauge and optionally an oil temperature gauge.

Mike says: If the high pressure switch (near the water pump) wiring is open circuit, or the switch the wrong one or faulty, or if the oil pressure is low (of course!!!) you will get the light and buzzer when the revs go above about 2000. If you earth the wiring and the buzzer still goes, check for break in circuit somewhere (14 pin plug under dash cowl one suspect.)

To identify your wires:- When you switch the ignition on, (Engine not running) the oil light should flash. (No buzzer should sound)

Disconnect the wires one at a time and the one that puts the light out is the one which should be attached to the low pressure switch (between the push rod tubes left cylinder bank.)

Grounding (Earthing) the other wire will stop the buzzer as a temporary measure (if you are sure of your oil pressure of course !!!) That assumes the wiring to the buzzer circuit is sound, any break in the wiring and the buzzer will sound even with the wire end grounded.

Hacksawbob The cuircuit board under the dash pod can get corroded (from windscreen corrosion badly fitting seal and or corrosion in the windscreen aperture) pry off dash pod top (both hands at the back and lift it can be tight) to see what the state of the PCB is in. Find the white plastic block to the right and under the dash 14 pins about 3" wide, disconnect it and buff up the copper contacts with a very light abrasive scouring pad? be extremely gentle removing it as you can further damage the tracks. Silver conductive paint can be used to repair the circuit tracks (available at Maplins) Some times an owner (or garage) will remove the buzzer connector on the back of the clock to prevent the buzzer going off rather than fix an oil pressure issue. 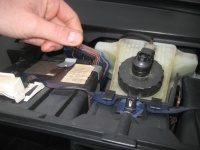