Well it failed, not surprised.

Bit worried about it all TBH, havent had a look under the van till the morning but the Welding work fills me with dread, esp as I spent £3000 on bodywork 2 years ago.

Front passenger seat is expected as I have a bench seat it was welded at the bottom. Will get someone to put a bar across to keep the back from drooping.

What do you reckon guys and gals

Do not drive until repaired (dangerous defects):

Rear fog lamp switch not operating in accordance with the requirements tell tail not working (4.5.3 (a) (i))
Offside Steering rack gaiter damaged or deteriorated, but preventing the ingress of dirt (2.1.3 (g) (i))

Monitor and repair if necessary (advisories):

travel on handbrake
Nearside Front Child Seat fitted not allowing full inspection of adult belt ()
Oil leak, but not excessive engine (8.4.1 (a) (i))

Blimey. How come most of that lot was not picked up on your last MOT? That bodywork especially. Good luck with getting it sorted.
2.1 LPG/Petrol Auto Caravelle
Top

R0B wrote:Blimey. How come most of that lot was not picked up on your last MOT? That bodywork especially. Good luck with getting it sorted.

Whats a seat squib? I thought squibs were to do with airbags? Not heard of one relating to a seat.
1987 T25 AAZ RHD Syncro
1989 T25 MTDI RHD Syncro
Top

Dobble wrote:Whats a seat squib? I thought squibs were to do with airbags? Not heard of one relating to a seat.


the only thing I can think is the fact I can take the sitting bit out if i lift the front up. and it doesnt sit that secure in frame. Its from a Nissan.. god knows... will inform tomorrow
87 Transporter 1.9 WBX DG and LPG. In Maroon

Pic's of the sills, structural?
Knowledge is power
1970 CU
Top


Will get them pics up tomorrow once i have had a word with them in the garage
87 Transporter 1.9 WBX DG and LPG. In Maroon

Suspect he means squab (i.e. the cushion you sit on).

The welding appears to be all the usual suspects but what did you get done for this:

As I'd have excepted all this sort of thing to have been done then?
RIP - George - 1.9DG '85 AutoSleeper Trident - rusted away

went to garage.. they dont like welding so they have passed it onto another guy... 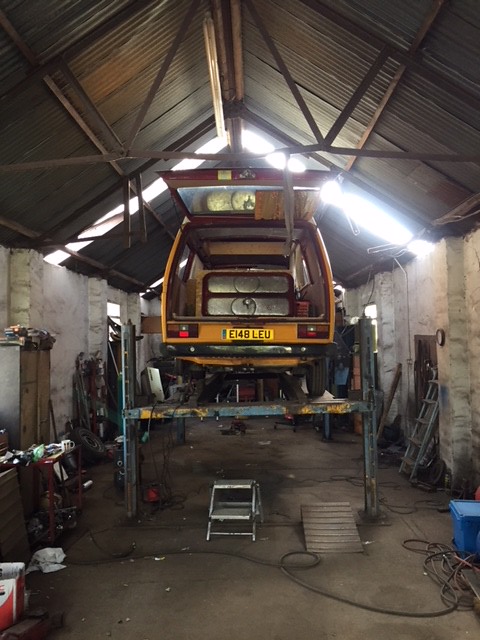 he had already done this by the time i got there... 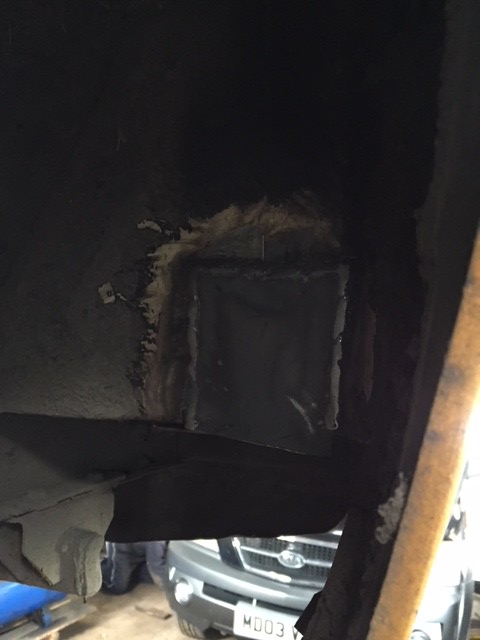 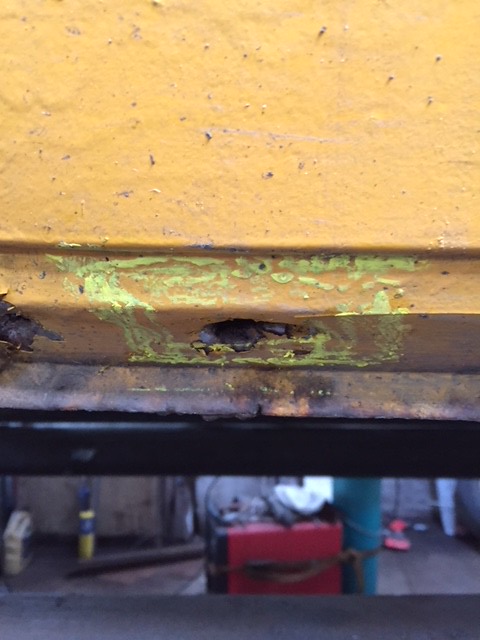 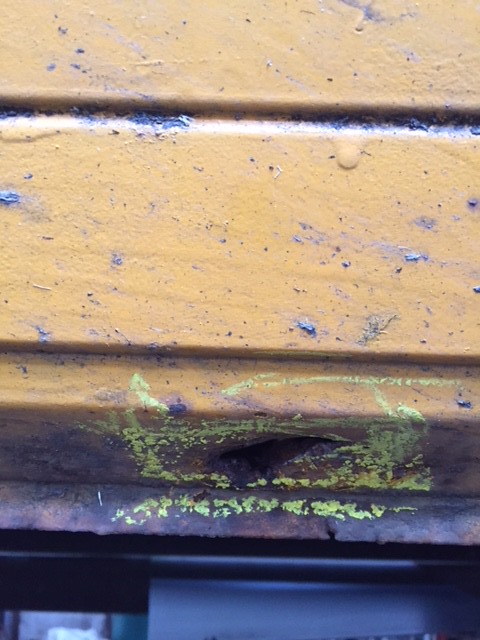 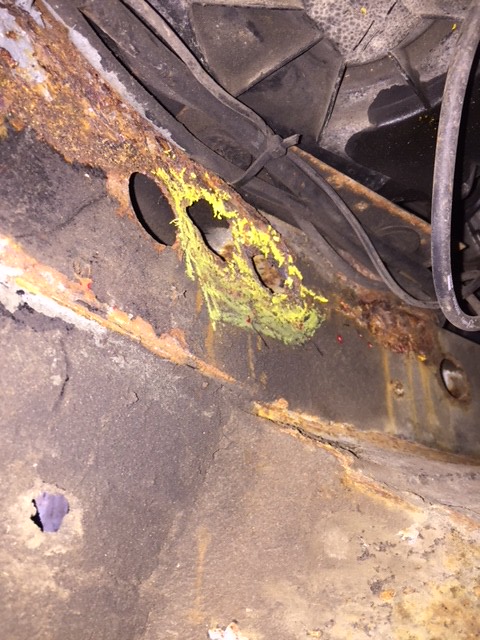 biggest problem now is finding a seat or fixing bench seat?? I have a bench seat in with a weld on the corners to support the back (its not self supportive). Thats gone so I have to either find another seat or does anyone know of a bench seat that would fit on the vw runners?
87 Transporter 1.9 WBX DG and LPG. In Maroon

To get an MOT take it back without the seat fitted. You’re not obliged to have a passenger seat, and if it’s not fitted they can’t test it.

That will give you as much time as you want/need to find a replacement.....
RIP - George - 1.9DG '85 AutoSleeper Trident - rusted away

T25Convert wrote:To get an MOT take it back without the seat fitted. You’re not obliged to have a passenger seat, and if it’s not fitted they can’t test it.

That will give you as much time as you want/need to find a replacement.....


I thought that, but because they tested with seat in does that mean I cant take it out?
87 Transporter 1.9 WBX DG and LPG. In Maroon

I got an defective advisory because my spare tyre was missing! Ridiculous, especially as a lot of cars do not have a spare to begin with. ( I had just had a new tyre put on and was waiting for a day when I felt good enough to shove the bu**er back under)
1.6D 2019 VW T-Cross
200hp T6
1̶Y̶ ̶1̶9̶8̶7̶ ̶H̶i̶-̶t̶o̶p̶ ̶C̶a̶r̶a̶v̶e̶l̶l̶e̶
5̶0̶8̶d̶ ̶M̶e̶r̶c̶
Top

Oldiebut goodie wrote:I got an defective advisory because my spare tyre was missing! Ridiculous, especially as a lot of cars do not have a spare to begin with.


That just seems wrong,this is what the current rules say

You only need to inspect the road wheels fitted to the vehicle at the time of the inspection. If you notice a defect on a spare wheel, you should tell the vehicle presenter about it.

There's nothing in the MOT tester assessment rules about failing to assess a spare wheel itself either.

Back on topic. The welding doesn't look too expensive, just beware that the repair metal may not be of the correct thickness, which means that it will fail again in a couple of years and then you have to bite the bullet for new sills. That is what happened with my CU before I bought it.
1981 RHD 2.0 Aircooled Leisuredrive project, CU engine
1990 RHD 1.9 Auto Sleeper with DF/DG engine
Top

Quote: There is no requirement to have a passenger seat fitted, if one is fitted it must conform to MOT standards!22 Jul 2010

As an amusing story albeit linked to the topic by the merest thread:
At age 17 just over 61 years ago I took my driving test in a Fordson 1,100cc side valve Station Wagon (aluminum on wooden body) used for my fathers Business.
It had no passenger seat and contained a 25 gallon drum of animal based glue in the back. So we secured the glue drum at the back and cut the legs off an old armchair and placed it in position for the tester. These were hard times in Hoxton London so the test standards tended to be shall we say sympathetic to the environment.
The test went well although the the testers loose armchair tended to slide about a bit and the series of clattering of the compensating linkages of the rod brakes probably didn't help. This together with the creaking of the bodywork would surely mean a fail.
On top of all that when the tester crashed his clipboard down on the dash for the emergency stop his knees were driven up under the dash as the armchair slid forward and the glue drum broke free and rumbled down to the cab area hitting the rear of the armchair and further crushing the instructor.

To my and everyone else's surprise I got a pass although it was cruelly suggested that it was done to protest the testing team from further harm.