mankymusic: I've got a 1.9DG with an autobox with is leaking, the strange thing is that its leaking out of the pipe that the AFT is supposed to go in.

As the engine warms up you can actually see the AFT rising up the dipstick, it drops again once the engine is off....any ideas? I doubt it is anything I can fix myself so any gearbox specialist in north wales I can get towed to?

vwcamperfan: I can remember a post from ages back mentioning a blocked breather hole on the top of the box. Could be the same problem.

mankymusic: yes, the atf rises up the filler pipe and out over the top, knock the engine off and it sinks back down, the atf level was OK, in fact i just got back from a 3000 mile trip to switzerland and next time i used the van this happened, lucky to have made it home! I've been to a "local garage" and he muttered something about blocked breather before washing his hands of the problem. will have a look for a breather hole and will order the seals / strainer from brickwerks as suggested, what's this pan filter, is that the "strainer"? If not where can I get one of them from?

There is a pan filter in the bottom of the gearbox. Remove pan and change filter and refil with new atf. See if that improves things. If not then box out and to specialist for £££'s of repairs or source good secondhand and fit that.

mankymusic: Crawled underneath the van and poked about on the top of the gearbox looking for this breather thingy, at first I was looking on the transmission (as this is where the fault was) but eventually found what felt like a bolt sticking up on top of the final drive. It was so caked in crud it was hard to identify. Took a good twist to turn it but it eventually came loose. Topped up the ATF and took it for a spin around the block - job done.

I have attached a photo showing the location of the breather for future reference. 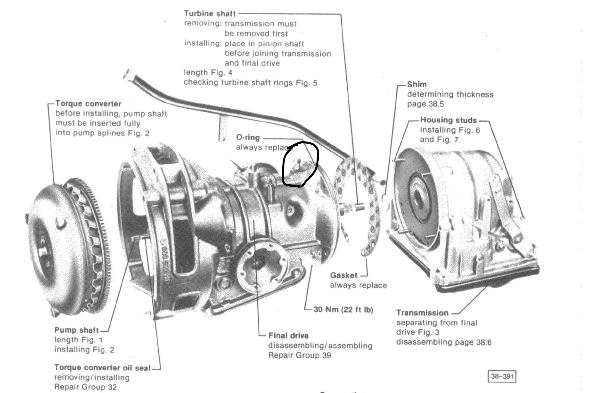 TrikePete: Had the same with my auto box oil pissing out the filler tube all over the engine and the road it was the breather blocked to check it get under van feel on top of gearbox at the front you will feel a round cap check that it moves.

81AirCooled: Anyone know what torque should be used on the pans' bolts?