I picked up a couple of stainless freelander side steps today for much cheapness. Reckon they might just look good on the van. Just propped in place for now. 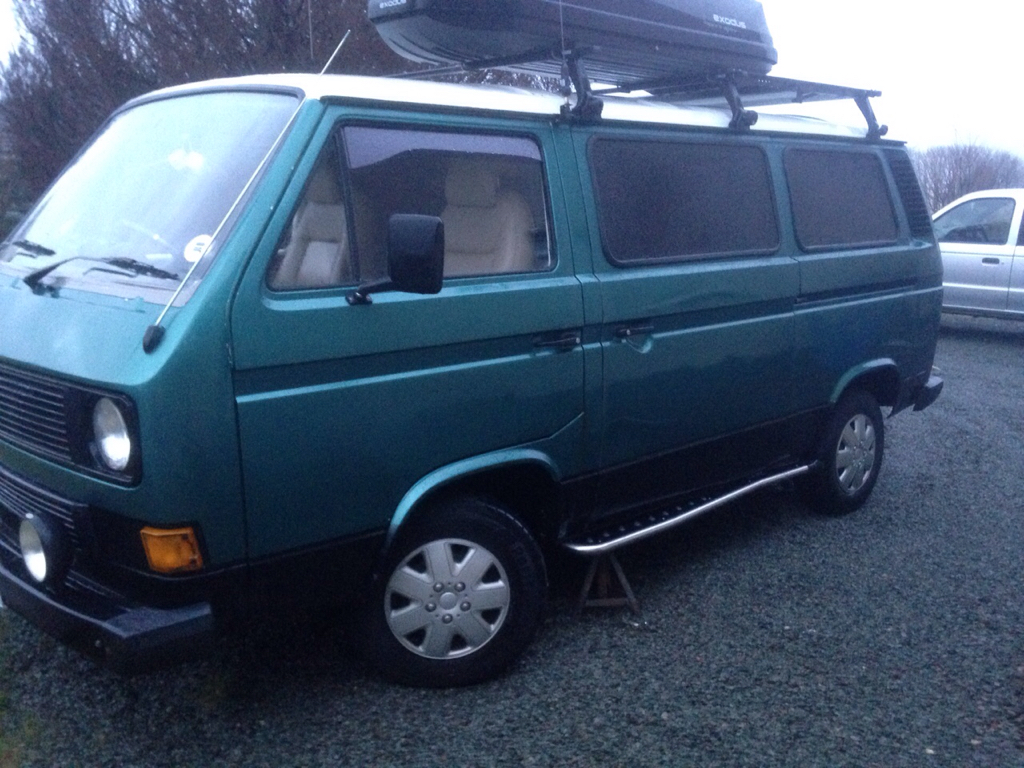 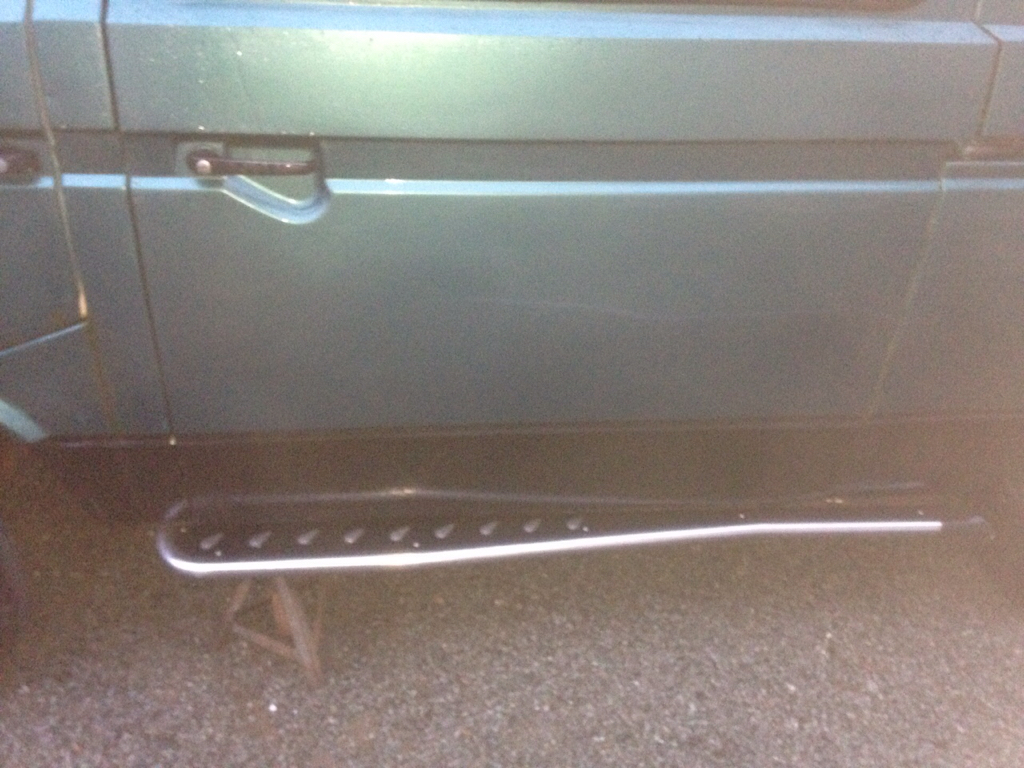 The brackets need a wee bit of modification but nothing i can't sort with a grinder and welder.
'86 1.9 DG, 4 spd, tintop, camper conversion.
Split case club member.
Top

Well... the nearside one is on and works well/looks good.
It bolts to the inner sill and I added some dexian L brackets to what passes for chassis rails on a T25.
The freelander mounting instructions said to use M8 rivnuts so I did.
Had to bodge a rivnut tool to get them tight but works fine.
It blocks access to the jacking point holes but my Ford ranger heavy duty scissor jack works fine along with a 6x2 block of wood. 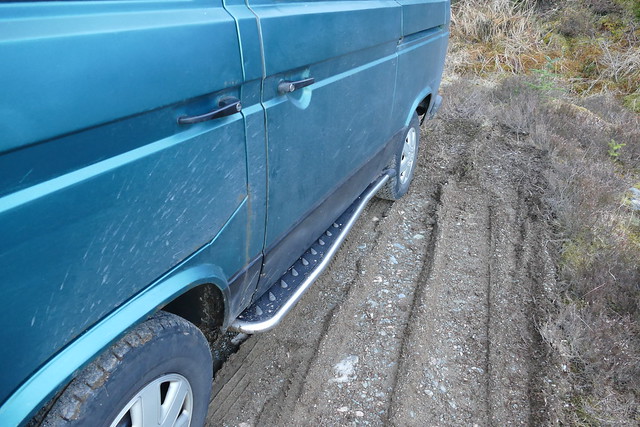 Had to go to Crete last week under instructions from the wife.

I'd rather have spent the money on the van but hey ho.
New rear boots on today, eurovan winters for extra grip on grass and forestry tracks.
The garage guy who put the tyres on the rims for me asked if I was expecting snow..... two hours later we had a shower of hail. hahaha.
Took the front wheels off to get it's new boots tomorrow and changed the track rod ends while I've got the wheels off, 10 minute job, piece of pi$$. these vans are so easy to work on. Glad to be back at it.
next job is radius rod bushes, Brickwerks order is in. I've got the bushes but need the nuts/washers/sleeves etc.

Then I might just get the garage man to sort the alignment.
'86 1.9 DG, 4 spd, tintop, camper conversion.
Split case club member.
Top

Make sure you have a good 27mm spanner to loosen the radius rod bolts and penetrating oil. Even doing that and using my Jack on the spanner it was lifting the van before undoing. I then used a b&q propane gas torch on the nuts and then thankfully movement happened. Once off I put one of the nuts in my vice, threaded the radius rod into the nut and then gently used my air gun to thread it in and out to clean the threads before using my thread cleaner. Went back on a bit easier than it came off but still blooming tight.
1987 VW T25: Subaru EJ20 using RJES parts (If it was meant to go fast it wouldn't be brick shaped!)
Top

I gave up with an open spanner on the flats at the base of the rod. Instead used two it’s tightened against each other with a ring and socket (foot on the ring spanner, haul on a 750mm breaker bar for the socket as hard as possible) then use the socket over both nuts to turn the rod - with either a jack or standing on the breaker bar.
'88 Transporter with hitop camper conversion, 1.6td.
Top

Thanks for sharing your experiences guys.
Much appreciated.
Looking at my nuts (ooh er mrs) I think I'll have to drill and chisel the front ones off and replace them.
Sounds like I'll need some heat and blood/sweat/tears to get the rod off.

Front wheels back on tonight with new boots.
While I was at it I thought I'd do a quick n dirty alignment check.

I used a 3m length of Unistrut propped on two axle stands so that the top edge was level with the hub centres.
Setting the strut parallel with the rear wheel gave me 1mm toe in each side on the front wheels.
Going by the wiki http://wiki.club8090.co.uk/index.php/St ... _Alignment I reckon I'm pretty damm close
considering this was a quick n dirty check...
The van was not perfectly level and the bar should be parallel to the chassis not to the rear wheel.
Once I change the radius rod bushes I'll check again.
'86 1.9 DG, 4 spd, tintop, camper conversion.
Split case club member.
Top

Funny, I was going to suggest the straight bar / axle stands / piece of string method, but decided it was a bit complex to explain. I think you used one of the rear wheels as a guide, assuming that was parallel, that's not necessarily the case. Better method is to have the bar across the front of the van and run the string from the bar onto the wheel / tyres. You do have to be accurate in your measurement of track though, best way is to move the bar next to the front wheel when deciding where to run the string from.

Trust me, if you've done it and measured accurately you won't need to take it for a check at a garage. I did it once using string, a 6' length of wood and chalk, was aiming for 12' total toe in, set it, took it for a check afterwards and it was set to 10'.

It gets more difficult when trying to check rear toe in, but still possible with the bar across the back method.

Make sure when you are measuring the van has been moved forwards & backwards a couple of times and finally drive it forwards in a straight line before measuring.

From the wiki the rears should have a wee bit of toe in too, so using them as a base line was wrong but ok for a quick and dirty check.
I'll do more accurate measurements once I've replaced the radius rod bits.
Hopefully I can find somewhere level to do it this time.

Took the van for a spin today,..... I got 8 miles up the road and it dropped to 3 cylinders and started clattering.

Further investigation showed the clattering was due to the engine leaping about, having bust an engine mount.

Dunno what caused the misfire but it cleared up as I nursed the van home. It was fine last weekend, did a 90 mile round trip no bother.
It's a bit damp and drizzly today so maybe that was all it was.

During investigations I noticed an oil leak from the breather tower so pulled it, gave it a good clean up and replaced it's o-ring seal.
Nice to see there was no mayo in the tower.

Oh well, engine mounts on order, not to self.... carry a spare spark plug so I can sheck which cylinder is mis-firing if it happens again.
'86 1.9 DG, 4 spd, tintop, camper conversion.
Split case club member.
Top

We set off to go to the beach 20 miles up the road today, were going to stay at Glenbrittle campsite for a couple of nights and just chill in the sunshine but fate had other plans for us.
The poor tired old engine finally died.

She overheated,water temp shot up, oil pressure dropped due to the heat I think and started clattering loudly, thin oil pissing out of the crankshaft seal and dripping on the hot exhaust, clouds of white smoke. Luckily it didn't catch fire but i got the wife and dog out quick, followed by her oxygen bottles and the butane bottles before peeking in the hatch with a fire extinguisher in my hand. 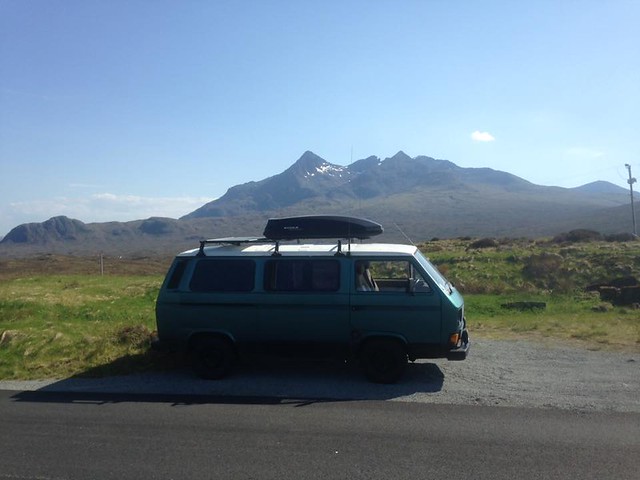 It took a while for the RAC to get to me so I had nice cold beer out of the new compressor fridge that arrived this morning and watched all the tourists heading for glenbrittle. 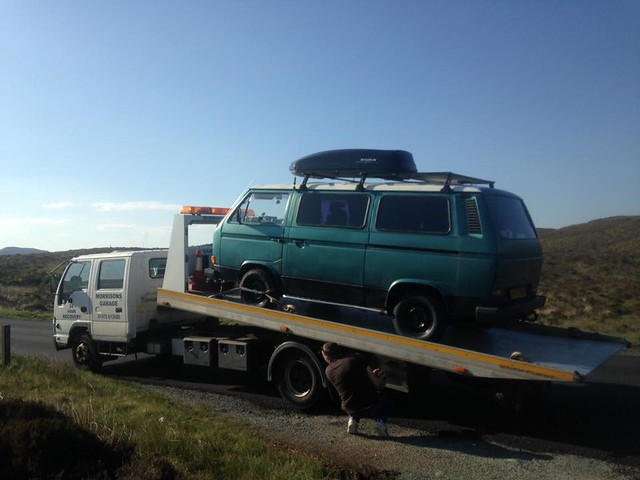 One it had cooled down I checked oil and water and they were fine so tried starting it up and it ran but sounded tappety but that could be piston slap or big ends.I darn't try driving home in case it let me down again.
I've got a couple of weeks off now so will drop the engine out and strip it and see what the damage is. Then decide whether to re-build, replace or look for a GTI.
'86 1.9 DG, 4 spd, tintop, camper conversion.
Split case club member.
Top

Oh dear, sorry to hear that. By the sounds of things it'll be big end / main bearings

Gutted for you both. I really am. (Both being you and the missus, ). Hope you have a good weekend despite.
'88 Transporter with hitop camper conversion, 1.6td.
Top

Sorry pal but that sounds exactly like a big end bearing, a problem I experienced an hour after buying my van

I've been having a think. White smoke out of the exhaust is indicative of head gasket failure, or some other method for coolant getting into the combustion chamber such as a cracked bore.

I'd suggest you drop the oil into a tray and look for any metal flakes or "shimmer" on the top of the oil, examine the filter too, maybe cut it open, before you go to the trouble of taking the engine out. All when you feel up to it.