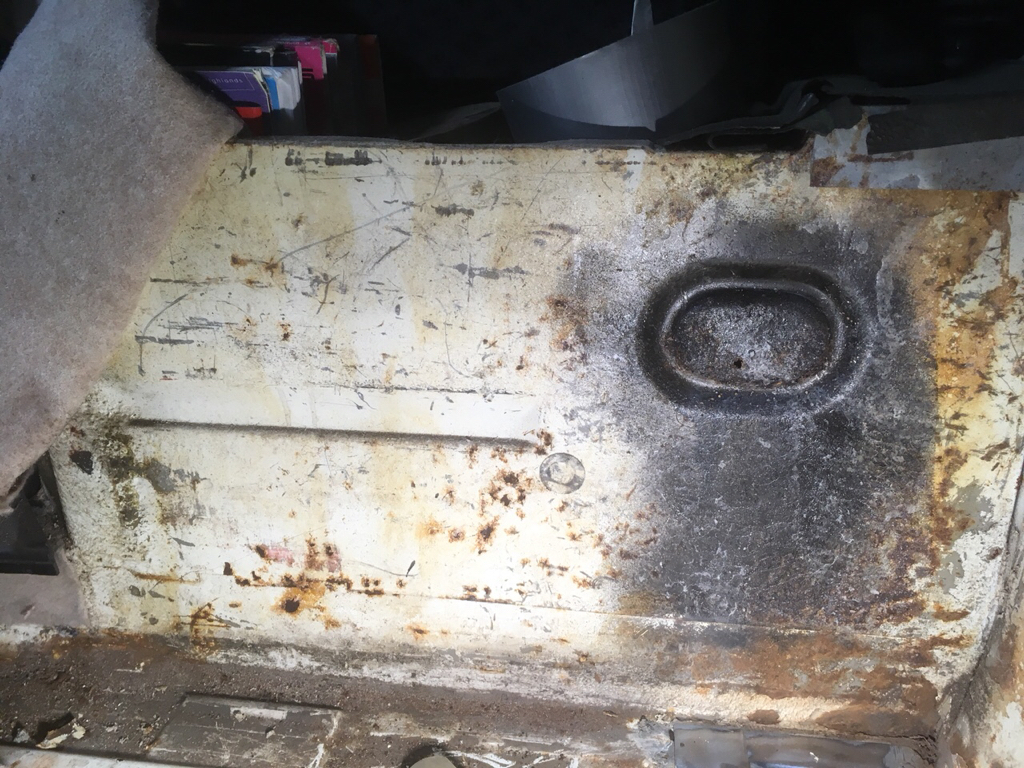 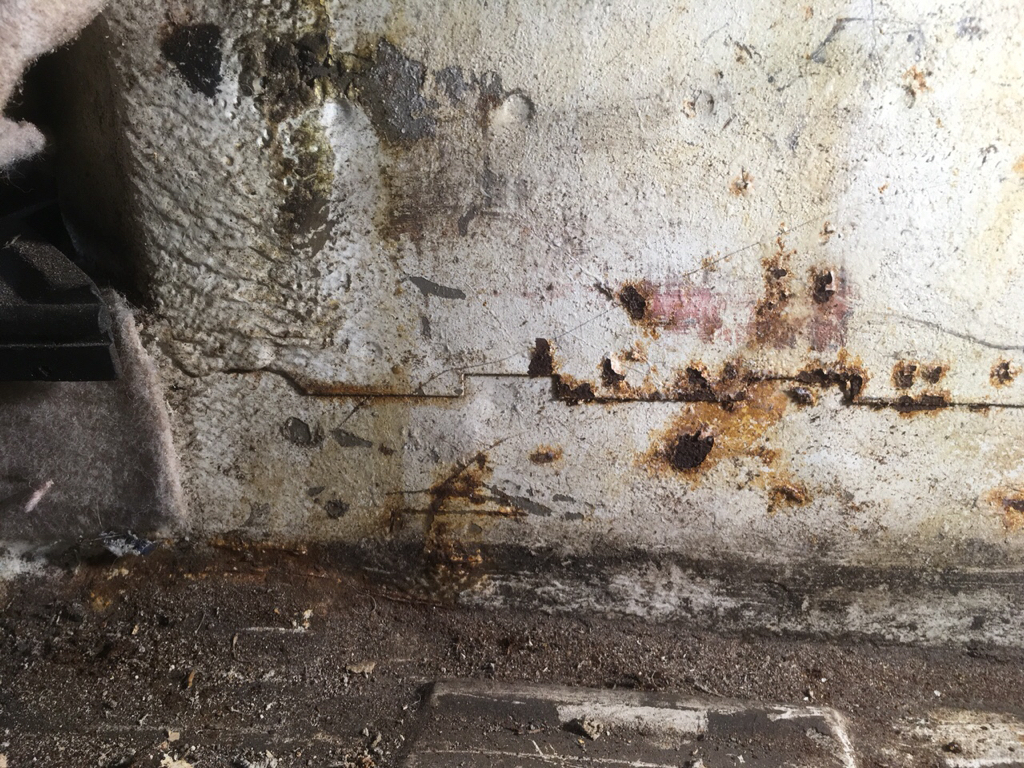 Not much progress today, and maybe two steps forward one back, more of that later.

So first I cut away at the inside of the B post to get rid of the rust, give some more space and allow the rear of the battery box to be fitted. You can see that the plate is properly aligned at the change in height on the right hand side which provides an easy way to position the panel.

and how it looks from the wheel arch. I cut away some of the rusty B post metal at the top of the picture and am beginning to get an idea of how the B post could be repaired, if that's the route I decide.

Having got that far I then proceeded to remove the remainder of the original battery box from the crossmember and thought, well that's ready for final prep and installation, when the rest of the area is ready. Having reviewed the pictures above (thanks Roger) I don't think my van has the metal plate coming up an inch and a half from the floor, so there isn't anything to lap over, or maybe I have ground it away, hence one stepback, but I don't think so.

Finally I wanted to get rid of the rest of the inner sill and jacking point and tried to cut them out. My grinder isn't big enough to do the vertical cuts, can't get the air chisel in and don't have a cutting torch. Scratching my head a bit as to how to remove this, any suggestions, all I can think of is cutting through the outrigger, but I don't want to do that until I have a replacement ?

Hmm, it’s a puzzle. Chop up the JP from the centre outwards? I’ll see how I get on...
'88 Transporter with hitop camper conversion, 1.6td.
Top


Yep, it's a rusty jigsaw where all the cutouts have deformed and the original picture has faded
1981 RHD 2.0 Aircooled Leisuredrive project, CU engine
1990 RHD 1.9 Auto Sleeper with DF/DG engine
Top

This is where I started today, JP in place, but with cuts up the side from the cutting disc. Three marks where I thought the spot welds were. Can you see where the JP is partly seam welded to the outrigger ?

I didn't fancy going for the 9" grinder option (didn't think I could get a thin disc), so decided to try a manual method. I realised that the welds on the back were very tough and progress was slow.

So my next approach was to cut off the old JP, and then incrementally make my way up the JP to the outrigger, the problem being the body of the grinder making contact and preventing further progress, combined with it wearing down meaning I couldn't get as far with it the more I used it.

Bit by bit I got there, until just the top of the inner sill remained

Finished off using a combination of grinder, air chisel, hand chisel and powerfile until this was left. I realise I could have just cut the outrigger to expose everything, but wanted to do it the hard way to see what it would look like if I had to do a job like this where a simple chop it off was not possible and existing metal needed to be preserved. I'm not on the clock, and have learnt some technique today

The support plate on the trailing arm mount was nagging me, so a quick 5 minutes with the grinder to move the cut further towards the wheelarch panel revealed this

and now looking down the void

Having looked at some other threads (in particular one by metalmick8y) I "had" decided to leave the trailing arm and rear wing (which has already been replaced) alone. I'm now back to arguing with myself. I think I can replace the vertical strengthening piece but have concerns about the section that comes out to meet the wing. I suppose that rusting through is what has allowed corrosion to start further back ?

If I decide to remove the rear wing to get access, will it (and the upper part of the fridge panel that it is connected to be scrap, or should I be able to remove and re-use

You seem to have a good attitude and energy for the work involved, you've come this far so do it right, open up those old repairs and sort out the rear jacking area then fit the full inner sill.
1992 red lle 2.2 subaru 1990 rhd caravelle 2.2 subaru 1986 california import vanagon
Top

I have just made a separate post in the bodywork section on my proposed repair method which I hope will be easy to find in the future for those not following this thread.

Quick phone call to Schofields this morning for some more repair panels, including a new outrigger as I am planning to be at Stanford Hall on Sunday so can collect them there. That's another £200 of fresh metal she's going to have, ...............one day

Another day, another thing learnt

Continuing with the offside, I though I would remove the bulk of the lower middle panel so I could see how the floor connected to the outer skin, and then plan how I was going to fix the Scholfield two piece panels. I could have been straighter in my cut, never mind. On the positive side the original panels are 1.2mm thick, so this is good metal for repairs

My initial thought was that the floor was sandwiched between the outer sill / middle panel. After carefully exposing the panel using the thin cutting disc I discovered that the floor actually bends down to form the inner sill, while the upper part is spot welded using a lip.

Having used the grinder I then tried out the spot weld removal tool on my air hammer. The air hammer worked, but if you look closely you can see it rips out the old welds, rather than cutting through them (three cut, two ripped). Back to the cutting discs then.

And this is what the floor needs to attach to. I'm thinking I can cut back and then butt weld, or better buy an air joggler and puddle weld it. I'll try & remember to ask the Schofields guys on Sunday, but if anyone has any advice I'm listening.

I think on mine the actual main floor panel stops where it attaches to the inner sill, the outer sill presumably had a lip (long gone!) that the panel fixed to, and the sill closure (which has that longitudinal rail on top of it) is fitted last.
'88 Transporter with hitop camper conversion, 1.6td.
Top

Ah, I wondered what that big bit of metal I have on my van was but that didn't appear in any of the resto threads I had looked at. Longitudinal Rail.

I've done another drawing, if it helps

Does it look OK to you ?

I suppose I just need to see how much I need to cut off to get back to the good stuff before I have to remove the longitudinal rail. No doubt that'll be more spot welds.

Boatbuilder has some good pictures, here's an example from his thread http://forum.club8090.co.uk/viewtopic.p ... &start=105

In detail there's the triangular closing piece at the front and he put in a new section of floor. I have noticed however the 4 holes for plasic plugs which are outboard of the longitudinal rail when fitted, but though you can see the seam weld onto the floor, I can't see how that part is fixed to the outer panels.
1981 RHD 2.0 Aircooled Leisuredrive project, CU engine
1990 RHD 1.9 Auto Sleeper with DF/DG engine
Top

It doesn't look too bad at all, I'll have to see what happens when I attach the rust patch at the front of the triangular closure.

the repair panel is neither here nor there in the scheme of things, yes it gives a little support but iis mainly decorative,
its the structural construction which is a combination of outrigger/inner sill and supports around the jp bracket
mm
Top

Saw a lovely panel van yesterday, here's what we all wish ours looked like