After owning T25's since 1996, first a air cooled Devon, then two Leisuredrive factory conversions with several Caravelle run about between I decided to build one how I wanted it!
I started with a Caravelle GL with a moon roof that had suffered considerable PO muppetry. I ran it for almost a year to make sure it was ok and everything that was going to fall off it did, then I sent it away to Mr Smith to get tidied up and a new coat of paint Then it went to see mr wait for a interior ........
And finally I transplanted a spare Leisuredrive hitop onto it This is Keif and we collected him yesterday. Found a couple more things that need doing today, but nothing that can't be sorted

This is 'Brian' named after my late farther in law, he is a 1982 Devon with a 2 litre CU engine and auto box. We are the forth owners having bought him about 18 months ago. Since then we have treated hin to a new set of curtains as the original Devon ones had suffered from the UV over the years and were more like nets. The wood floor has been replace with some Flotex as close as possible to the original to stop the dog sliding about. I have added rear head rests and seatbelts for the kids, otherwise it is very much original and in good working order

The preowner does a lot of Bodywork, and I change and repair nearly every tecnical item...

The Day I bring her home We desperately wanted a camper for years but not until we got a dog did we realise that camping in a tent and using our old MK4 Golf to transport us just wasn't feasible any more. We bit the bullet back in 2010 and bought the second camper we looked at. We wouldn't be without her now, we have made improvements over the years by adding LED interior lights and new flooring.

I laughingly say I have spent as much time under the van, working on her, as I have actually spent sleeping in her, but an old vehicle needs regular maintenance and most of the van was original (Brake pipes, bushes etc.) so they are coming to the natural end of their working life and are being replaced with the best we can afford. 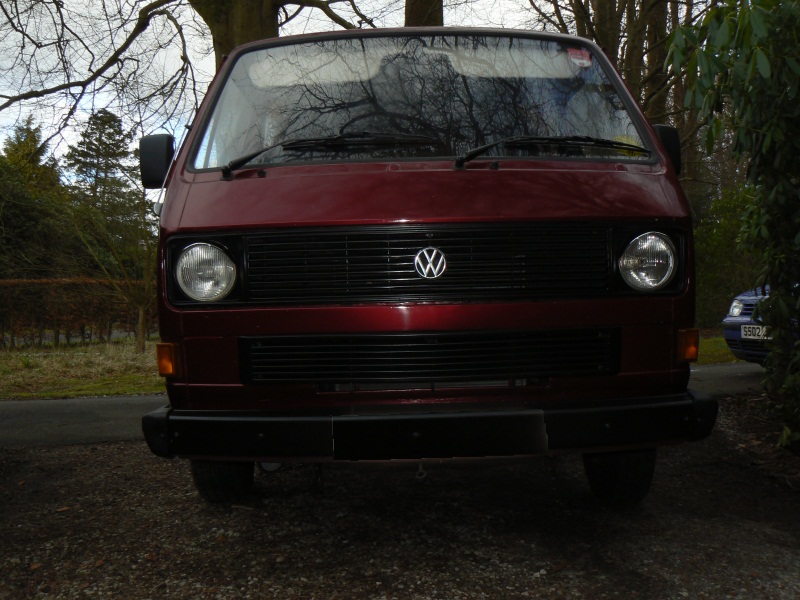 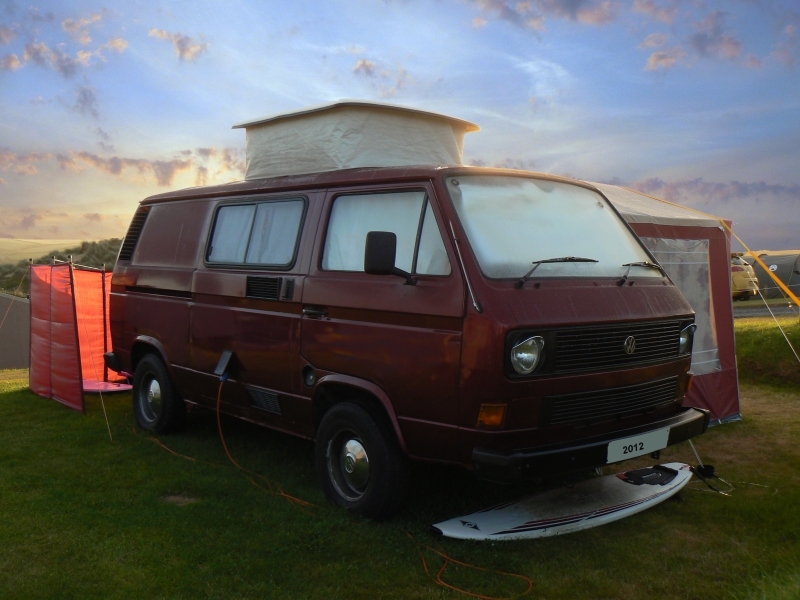 My van is a 1990, VW T25, 'Holdsworth Vision' conversion which I bought from a member of 80-90 three years ago. The date of first registration coincided with my Mum's birthday, so, as it is my custom of naming my 'special' vehicles, I named this one Eileen after my Mum.
It's my first T25, but I have had two T2 'bays' in the past, a Dormobile and a panel van.
I viewed and tried many campervans (not all of them VW's!) before settling for this one.
It seems that most people prefer the conventional layout of a side kitchen and a rock and roll bed, but I could not live with such an arrangement and the 'Vision' layout suits me perfectly.
It is powered by a 2.1 DJ engine through an automatic gearbox. During my first year of ownership it was expertly converted to run on LPG by Steve and John at Gasure, Saltney, who also fitted central locking and various security measures.
I had fitted 5 new Marshal 8 ply commercial grade tyres at a local tyre fitters with whom I have dealt for years, Priory Tyre Services, Anfield, Liverpool and a stainless steel exhaust system by J.P.Exhausts of Macclesfield . I had the interior re-upholstered at Car and Marine Connections in Birkenhead (Their website has regrettably been hacked, but this link shows where they are, click on ''C'')
Would be thieves made three separate but fortunately unsuccessful attempts to steal my square headlights soon after I bought the van so I decided to fit round ones instead. I did a deal with a club member I knew to exchange my square lights for his round ones and I have not been bothered by thieves ever since. He was delighted with his up-grade and I was delighted to have peace of mind.
Last year, following my van nearly catching fire one night at my last ever Pikey meet the autumn previous, I decided to have a new Propex heater supplied and fitted and, on a friend's recommendation paid a visit to Andrew at Campershack. Andrew not only fitted the Propex but managed to obtain it at an advantageous price. Whilst there, Andrew identified a problem which had been causing me to lose both performance and fuel economy. The culprit was the airflow meter. Andrew supplied and fitted a good used replacement and fitted the now legendary Blos carburettor with a K&N air filter. After various other 'arcane' fine tuning procedures, the transformation was astounding. She was even more nimble than when I first bought her and the fuel consumption was vastly improved.

Comparing the two pics above, I do think the four-eyes look is prettier. It's just a shame that there are low-lifes in this world who will not let you have anything nice without they want to take it off you.

The original upholstery was pretty much shot, so I decided to have it re-upholstered throughout (minus the door cards)

The colour scheme for the seats was inspired by my favourite food - fillet steak!
Bob

This is Big Betty - a VW LT Westfalia Florida. I've had her a couple of years and she'll be going shortly (she's on Ebay now), but we've had some great trips in her, and know we'll really miss her when she's gone.

She was roller painted a couple of years ago after a little superficial rust was treated, and is still looking good:

It's the space that we fell in love with - Betty can seat 7 for driving, has a double bed at the bottom and a huge bed up top:

And this is what we'll miss the most....(not that the kids ever get around to using it!):

A positive attitude may not solve all your problems but it will p.iss off enough people to make it worth the effort
Top

Here is my Bad boy Smurfy. I bought a T25 a few years back in 2009 and i did it on Fle Bay and she was rotten. I really wanted another one and In Feb this year i bought Smurfy.

These are the photos from when we got him:

So in the past three months we have had a fair bit done with tons of help from fellow club members for advice.
When we got him he needed an MOT so off to the garage, Water pump, Temp sensor, one of the wheel bearings Then passed MOT

There was still an overheating issue and he had trouble getting up hills. so i did the rest myself:
Then Heater switch, heater (Finally no fuses blow and fan works), then recon engine ( fitted at EliteVW) R&R bed, rear seat belts, 240v & fuse box, Zig rewire, Split charge rewire (Now it works), Gear linkage (Yay i can now get 1st), Gas regulator (now we have cooker and fridge working on gas, Fridge electrics (Safer working on 12v or 240v. Bluetooth Stereo.

After all this she still looks tired but goes like stink

Then it was hello welder...

As you can see from the photo it was also hello offspring!

Beryl hasn't really had much else done to her apart from a leisure battery and the usual maintenance. She has got another date with the welder and resprayer as the job done wasn't A1 but never mind.
She has taken us to France, Scotland, Spain, Switzerland and Ireland. She has been a treatment room for my wife to do dialysis in, she is also a playroom for our daughter and has assisted in countless moves, trips to ikea and the obligatory tip runs!

Its been 8 great years although she is no stranger to one of these... It's early days but we already love our van, but we do have some issues to iron out...

1) Buzzer of doom. Hoping some checking of connectors, wires or replacing of oil pressure switches will cure.
2) Stalling at junctions, flat spot and sometimes backfiring. Hoping a carb clean or re-build will cure.

Other than that we want to improve the interior, but we'll be doing it on a budget...

1) Thinking we might replace the vinyl wood look fronts of cupboards, either with another wood effect vinyl or perhaps something else!?

2) Also thinking of replacing the carpet, maybe with another cream/beige carpet or possibly vinyl flooring.

3) We're making new curtains all round.

4) The rear seat has been re-covered in purple faux leather with a blue stripe and looks great but lets down the front seats. We are hoping to do the front seats the same and then tie in the purple and blue colour in to the curtains. Looking for someone who makes bespoke covers for the front seats and can match or nearly match the rear ones.

On the exterior, probably the first thing we will do is get some new hub caps, maybe the shinny vw ones!?

As you can probably tell, we are still weighing up our options of what we can do to the van especially since we have limited budget. I'm hoping this forum might help with some of those decisions. Thought i'd add to this thread, it's great seeing what people have done to their vans.

Ok, so as we bought her from biker mike on here..

and now after two years of blood (a lot), sweat (more than blood), and tears (at times it reduced me to this!)...

Quite a change, but so happy with the results. It's been worth all the broken bits and rust hunting to have her where she is today

hi there people just got in to the camper scene.... upgraded from my mk2 scirocco1.8gtx scene haha
ok heres some pics of the old girl

original as i recieved her two weeks ago

as she sits at the mo

blacked out the windows and lobbed on a set granada rims that i got friday, fitted saturday morning.. then test run them to Cannock chase for the night, then to camper jam just up the road .
we have done 250 miles
the ride has completely changed, lost a lot of the boatlike roll and hardly any road noise due to the new set of energysaver mich's (nothanks to tyreleader)

Here's an '85 Devon conversion with it's original 1.9 DG engine, paint and remarkably clean and complete interior. It's a low-spec model without a leisure battery, camping heater, louvred window, captain's seats or any other frills in the cabin but what's there is in lovely working condition.

I bought it showing 55,000 miles from its second owner, an 80-90 member who had had fortunately kept the van completely original and had lots of history to go with it. It's been a pleasure to own, use and maintain.

Devon's conversions were all based on factory-supplied window-vans rather than panel vans as they were the only VW-approved converter in the UK. Right-hand drive's a bonus, too. The interior layout is easy to use and comfortable with some retro homely charm. 50 shades of brown, in other words, with a few clever design touches here and there.

No modifications are planned, just lots of servicing and quality parts whenever needed. We're going to carry on enjoying it all year round for what it is, an honest, simple, life-enhancing old camper with nothing added and nothing taken away.