I've been looking for an OEM petrol rev counter to replace the time clock in my early dash. I know the loom/PCB is different, but now that I've replaced the foil PCB it's straightforward to wire up a tacho. I've previously run a wire from the coil in preparation for this.

Petrol rev counters seem like the proverbial hen's teeth and are correspondingly expensive. But diesel rev counters seem to be available new, and while not cheap that does at least keep a lid on the secondhand prices. So I began investigating what the differences are, and whether it would be possible to run a diesel tacho in a petrol dash. I think there are two possibilities:

1) Does my alternator have a 'W' terminal? I have no idea at the moment without checking - anyone know if that's likely? If so, then I could run a diesel tacho directly, although I may have to tune it to suit the rotation rate of my alternator.

2) Can the circuit board on a diesel tacho be adapted to suit a coil pulse? I found various links about going the other way - running a petrol tacho on a diesel engine. In fact this really useful link shows the two circuit board schematics:

And photos of both sides of the petrol version PCB:

The only missing piece of information for the petrol version seems to be R5, with a value of 'dunno' - and the photo isn't clear enough to read the stripes. But other than that it seems feasible to convert the diesel board to petrol, if the physical board layout has places for all the missing components. If it doesn't, well there's enough information there to make a whole new circuit board to make the diesel tacho hardware work with a coil pulse.

Am I wasting my time - is there an easier conversion, or perhaps a ready source of petrol tachos that I've missed?
"I'm a man of means, by no means....King of the Road!"

If I remember rightly, there was something on the SAMBA on converting one to the other. No you won't have a W terminal.
Roller paint your camper at home: http://roller.epizy.com/55554/" onclick="window.open(this.href);return false; for MP4 download.
Top

First attempt at translating those images into a PCB design. No idea of the correct dimensions, or how much scope there is to move components around, and I haven't bothered to match component sizes and specs properly yet - it's just to make a start, and perhaps stimulate some discussion. I'm not even sure that those schematics and photos correspond to the OEM tacho in the T25. I think I may have to invest in a diesel tacho if I'm going to take this any further. 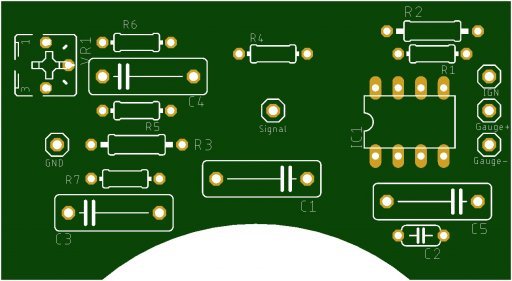 52mm pod mounted and go camping with the time you saved

Yeah, there is that option, but I already have the ashtray-mounted oil pressure and temperature gauges, and besides, there's no challenge in that.

itchyfeet wrote:... and go camping with the time you saved

Yeah, there is that option, but I already have the ashtray-mounted oil pressure and temperature gauges, and besides, there's no challenge in that.

You had about 5 minutes, between me finding out that the hardware might be common and the idea taking hold. You missed it - it's out of my control now. I've ordered a diesel tacho - if the idea turns out to be a dead end I'll just sell it on.
"I'm a man of means, by no means....King of the Road!"

My thoughts on this FWIW, though clearly I am not that bothered as I have a far better option available than bodging tired old 1970's/80's components

Golfs of the same era have similar tacho units that can be fitted into the T3 binnacle, these may be a useful source of the basic tach unit. There are variants with higher max rev limits (eg. 7k).

Petrol tacho's use an input frequency of 2 pulses per rev, whether coil-driven, or ECU-driven. Subaru uses the same convention here as VW, for those with 'impure' wasserboxers fitted. Coil driven tacho units have an input filter circuit to cope with the ~150v spikes coming from terminal 1 (coil neg). The VDO tach can be modified by changing some resistors to work with a ~12v signal which ECU's typically produce.

Diesel tacho's designed to work form the W terminal use a much higher input frequency of the order of 10x the petrol tacho frequency.
Syncrosport
Volkswagen Transporter, reloaded.

Thank you - your thoughts are worth a lot, and there's no question that yours is the superior solution. I saw your setup at busfest. last year, and was highly impressed, and given the prices some are are asking for 'tired old 1970s/80s components' I'd say your solution is cracking value.

I looked at some contemporary VW tachos, and figured that some of them might be interchangeable, but I didn't find a unit that has the fuel and temperature gauges, and I need to retain those obviously. Are you suggesting that the basic tacho unit from a golf would install behind the faceplate of a T25 tacho/gauges combo?

I don't have the electronics knowledge to adapt the circuits, but I can implement someone else's schematic. I've read that the different pulse rates result in different voltages out of the capacitors, and the modifications are aimed at scaling that output voltage, then trimming it, to produce the correct needle deflection. I'm hoping I can tell what I need from the diesel tacho that I've ordered 'non-destructively', and if the circuit looks similar to those schematics I'll have a go at converting it to coil pulses.
"I'm a man of means, by no means....King of the Road!"

itchyfeet wrote:any reason why you can't fit a diesel alternator?


Good question - I haven't looked into why there's even a difference.
"I'm a man of means, by no means....King of the Road!"

Can't see that there would be - other than the W connection.
Roller paint your camper at home: http://roller.epizy.com/55554/" onclick="window.open(this.href);return false; for MP4 download.
Top

If you don't have the DOPs board installed then you could use a Diesel Alternator (Petrol and Diesel DOPs pcb are different).

I fitted a full size petrol Tacho in the analogue clock housing but the fuel and Temp gauge had to be reloctated. I designed the dash to suit a smaller steering wheel.

Alternatively, I fitted a 52 mm Tacho in my spare Dash in the space under the LED display but I think your PCB board sits over that area. I 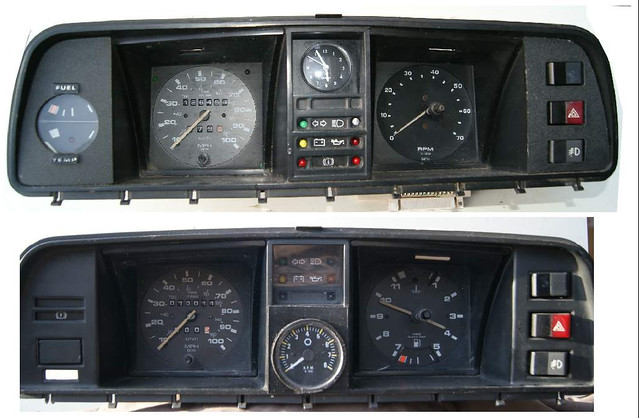 Looks like you can add a W terminal to an alternator

and it looks like the output is a voltage with variable frequency from one of the phases of the alternator, the frequency being used to drive the tacho