Hi there
I am looking at fitting a tow bar for a caravan on my T25 however.....

Ideally I would like it detachable as I don't like the look of them.
Currently have metal small bumpers.

Anybody know what options are available and what they are like to fit? Are they bolt on jobs or is there welding ect involved>?
http://www.justgermancrew.com Come and join the FUN!
1985 VW T25 EJ25 SOHC Hydro Bus
Top

I have one fitted to mine. The main crossbeam fits inside the metal bumper so you can't see it. You take off your old bumper mounts and the bumper bolts onto the towbar.
The towbar has two arms that slide inside the chassis and it bolts on with six bolts.

Same as mine, doesn't look that bad really? The bit next to the tow ball is for a bike carrier. 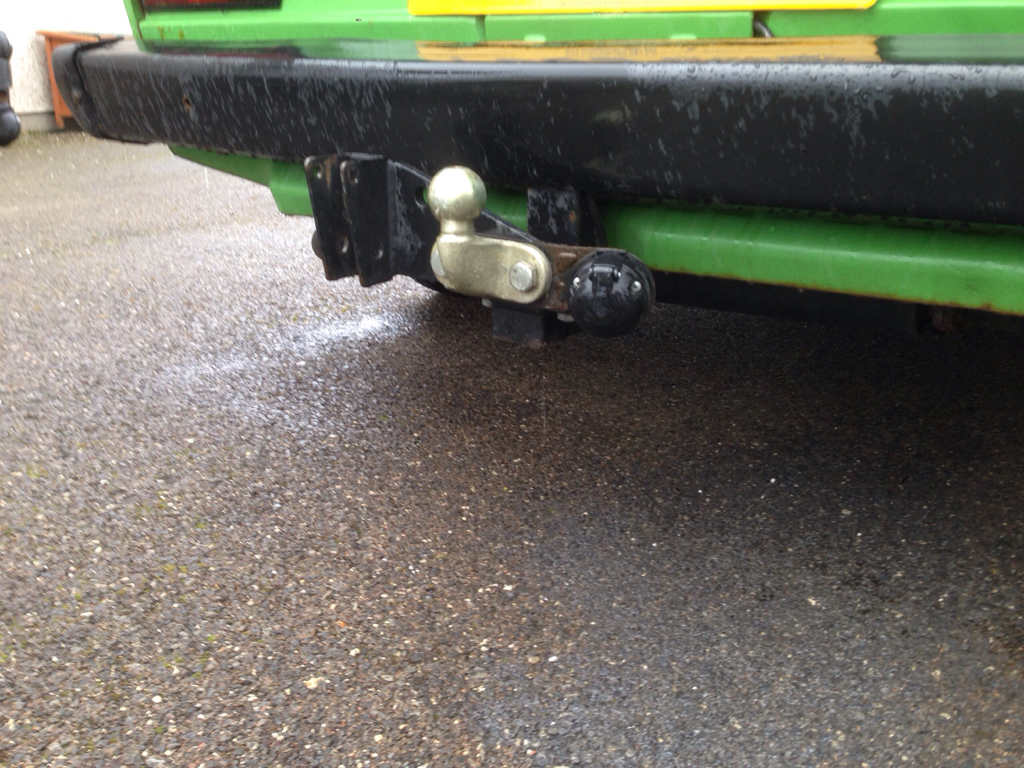 Agree with above. In fact mine was made by a neighbour - length of thick tube cut to fit between bumper brackets, properly welded to them and then a tow hook welded to that with a short section of equally heavyweight box section. Took him all of 20 mins to do it.
Roller paint your camper at home: http://roller.epizy.com/55554/" onclick="window.open(this.href);return false; for MP4 download.
Top

Thought I'd resurrect this thread rather than start a new one. I'm hoping to fit a tow bar and could do with a bit of guidance. I've seen a few second hand ones on Ebay but they all vary slightly so would like to check fitting.

There's a swan neck one from the Nederlands with no electrics and then a few of the square black ones with electrics, all saying T25 tow bar. Some have an arm either end that looks just under a foot long with a couple of bolt holes, whilst some have an additional arm that hooks around the shorter arm and then extends around a foot beyond it. Is this longer bumper bracket necessary? Also, where does the bumper bolt back on - I can't see any holes on the tow bars for it to be bolted to. Are the original bolt holes on the bumper used?

Here's a picture of my van minus bumper. I assume I remove the bumper brackets and slide the tow bar in? I have a modified exhaust set up - is this likely to cause a problem? Interesting bit of electric cable poking out - no idea why that's there!


Sorry for all the questions! Want to be sure I know what I'm doing before I buy a big chunk of (fairly battered) metal off the internet!
Super Viking with Subaru EJ22 (formerly 1.9 petrol DG)
Top

IMHO your best bet would be to get an original Westfalia towbar- one of the swan neck ones for a 2WD van. The fitting instructions for it can be downloaded from the WestfaliaT3 site here:

Electrics are probably best wired in from scratch with new kit, so I wouldn’t necessarily worry about buying one without wiring. However I would suggest you make sure your towbar still has the load plate attached that has all the various loading info stamped on it.

Fitting is pretty straightforward. As you’ve already guessed, you’ll need to remove the old bumper supports, and then the towbar just slides into the same recesses in the chassis, with three bolts to retain it fitted from the outer side of each of the support arms. Unless you’ve got a really weird exhaust setup, it shouldn’t be effected at all by the towbar being fitted.

The only other thing you’ll probably need to do is cut a notch in the bottom face of your bumper to clearance the swan neck, with the cut edge finished properly to avoid corrosion.

Thanks clift, that's all massively helpful. Must say, I prefer the swan neck ones. This one is available on Ebay and just down the road from me...

Has two weights on the label (1200kg and 50kg). I'm assuming max weight is the 50kg? I'm wanting to put a bike rack on the tow bar and carry up to 4 bikes which will push me pretty close, if not beyond 50kg. If cars can take this weight using these bike racks on their tow bar, I'm assuming our vans can??
Super Viking with Subaru EJ22 (formerly 1.9 petrol DG)
Top

That looks superficially similar, but it isn't a Westfalia towbar. The swan-neck on the Westy towbars is a more robust solid bar from the ball head to the cross beam, like the example in the picture below. The Westy towbars generally have a higher rated maximum towing weight of 1800kg or 2000kg, and typically a higher rated noseweight of 75kg or 100kg. 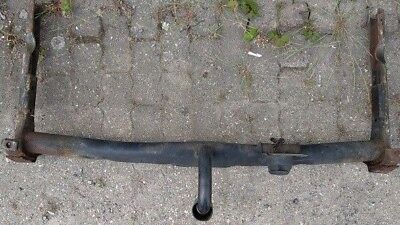 The example you've linked should be fine, but if it was me I would probably wait to find a genuine Westfalia example - maybe you could try posting a Wanted ad on here.

The 50kg on the tag is the maximum rated trailer noseweight for that towbar - you're supposed to ensure that your bicycle rack and bicycles weigh less than that limit.
1988 LHD T25 1.6TD Westfalia Club Joker Hightop syncro
Top

The one in the link is a very good quality one , more than good enough and quite cheap, presumably that’s why the auction ended. Put a waste add up as there’s lots of different types some you can pick up fir as little at £10-30 regularly

Took a punt and bought it, but I may have underestimated the weight of our 4 bikes.

Thanks for all the help so far guys. Can anyone give me a little more info on what is meant by the nose weight and how that impacts what I can carry?

From what I understand the 50kg on this tow bar refers to the nose weight and the 1200kg is the max weight of anything being towed. Does that mean that 50kg is the max load the bar can take? (It doesn't seem much - I weigh nearly twice that and I don't reckon the nose bar would snap off if I stood on it!)

Four bikes at around 13/14kg has a combined total of around 58kg. Add in the bike rack at around 18kg and you've a total weight of around 76kg - above the genuine Westfalia nose weight of 75kg.

So in a nutshell, have I misunderstood the link between nose weight and maximum weight for a tow bar?!
Super Viking with Subaru EJ22 (formerly 1.9 petrol DG)
Top

The nose weight is not the structural weight limit of the tow bar it’s the recommended nose weight to keep the vehicle stable that tow bar will probably take 2 ton , it’s never ever going to break with bikes in it
Top

If your concerned with the limitation put a couple of straps on the back end of carrier up over the bikes and attach to the top back end of your bus. This would take some weight off your tow bar plus bikes more secure.
Rubber covered flat hooks, close to the hinges, for tail gate etc.
Peter
1984 1.9 DG petrol water boxer caravelle hightop
Top

davidoft1 wrote:The nose weight is not the structural weight limit of the tow bar it’s the recommended nose weight to keep the vehicle stable that tow bar will probably take 2 ton , it’s never ever going to break with bikes in it

Even if a towbar might have been designed to handle a pulling load of up to 2 tons, it is unlikely that it will have been designed to handle much more nose weight than it is plated for, plus whatever margin of safety the designers will have been told to use. So while it may be okay to go slightly over the plated limit with a bicycle rack, there are reasons it isn’t recommended, other than the possible consequences for the vehicle’s steering.

You need to remember that the tow-ball on a T25 is around 300mm behind the position of the last fixing point to the van and so, while any pulling load is generally acting in tension in line with this fixing point, any vertical nose weight load is actually acting on the towbar as a bending twisting load on a 300mm long cantilever.

If you have a 75kg nose load on the tow-ball, and then you go over a pothole at speed, the vertical load that could be applied to the towbar as a result of the impact may be considerably more than the actual nose weight. This means that a nose weight of 75kg can lead to an applied impact load of several hundred kilograms on the tow-ball, all of which is acting vertically on the end of that cantilever.

While such a multiplied vertical impact load based on the plated nose weight should have been taken into account by the towbar’s designers, any additional nose load you add over and above the plated limit may not, and this extra load also gets multiplied in an impact. So if you go over the plated nose weight limit by say 40kg, you could be adding a couple of hundred kilograms to any impact load acting vertically on that cantilever, and you are then relying on the towbar designer to have allowed sufficient safety margin to cover this.
1988 LHD T25 1.6TD Westfalia Club Joker Hightop syncro
Top
Post Reply
18 posts