Over the winter, the beloved Club Joker has developed nasty rust in the gutter over the passenger side door - the corner at the front has broken away.

I need to get this fixed - does anyone have any recommendations for someone in the North West/Cumbria that can help? Is it possible to fix this without removing the whole fiber glass HiTop?
--
Dunx
1985 T25 Westfalia Club Joker
Top

I suspect corrosion under the hardtop though it may be the adhesive sealant is allowing water under it or probably a combination of both. Not sure replacing the guttering with the hardtop in situ is going to be possible. Might be possible for a skilled welder to tack in a small section but how long it will last is the question. Can you remove some of the interior panels over the door and check the condition of the roof?
1987 DG Karisma LPG with remodelled interior
Top 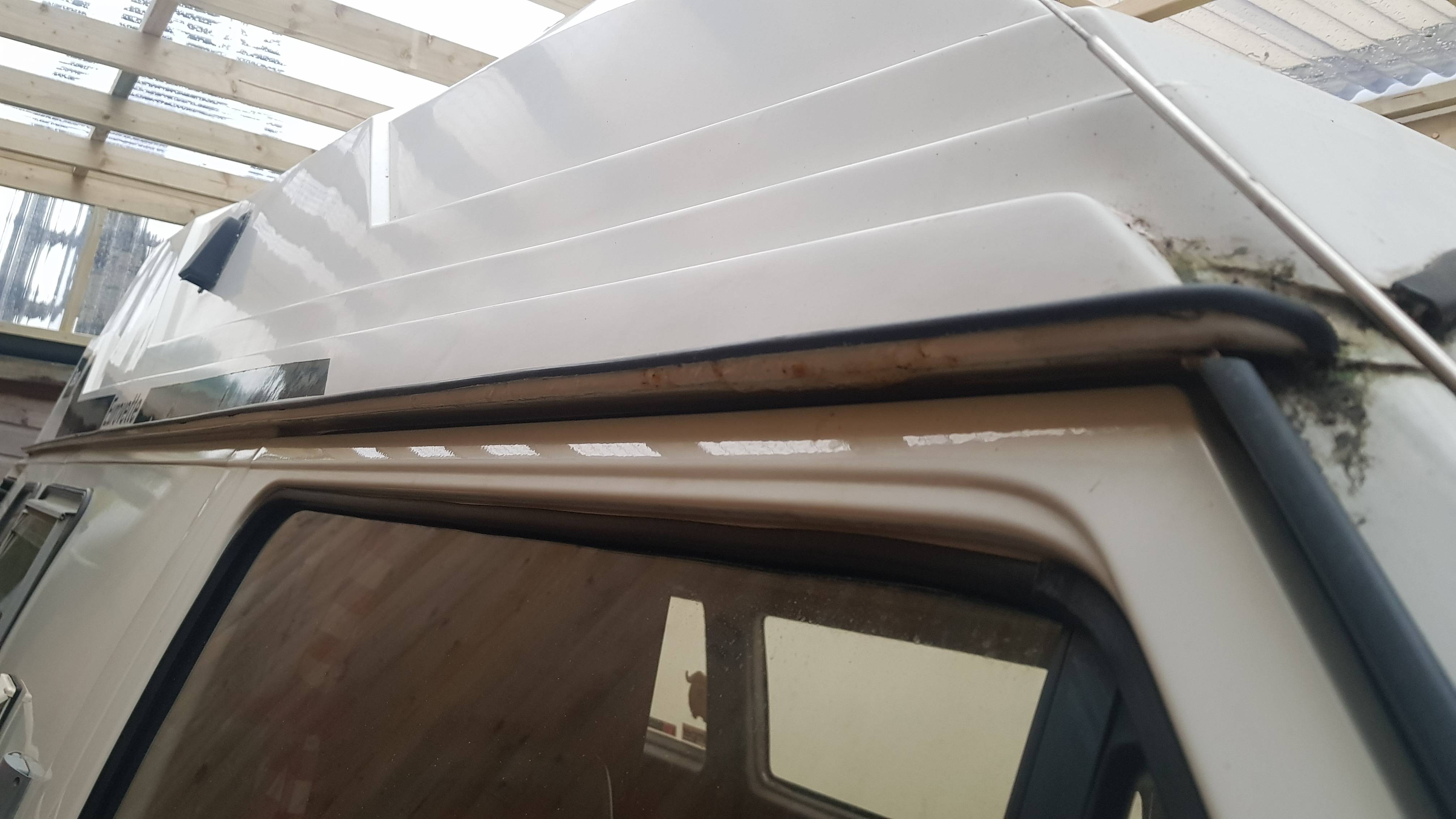 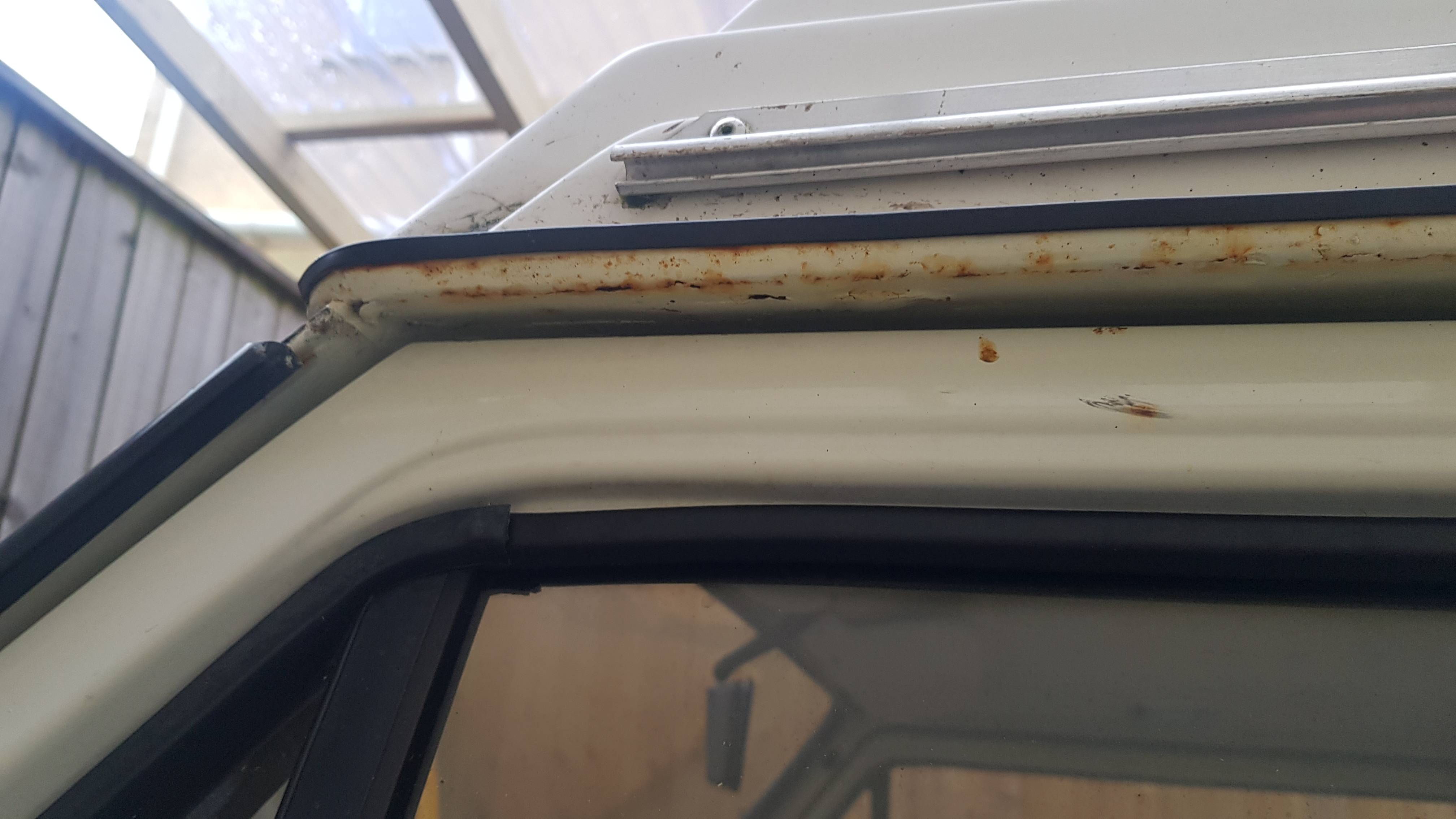 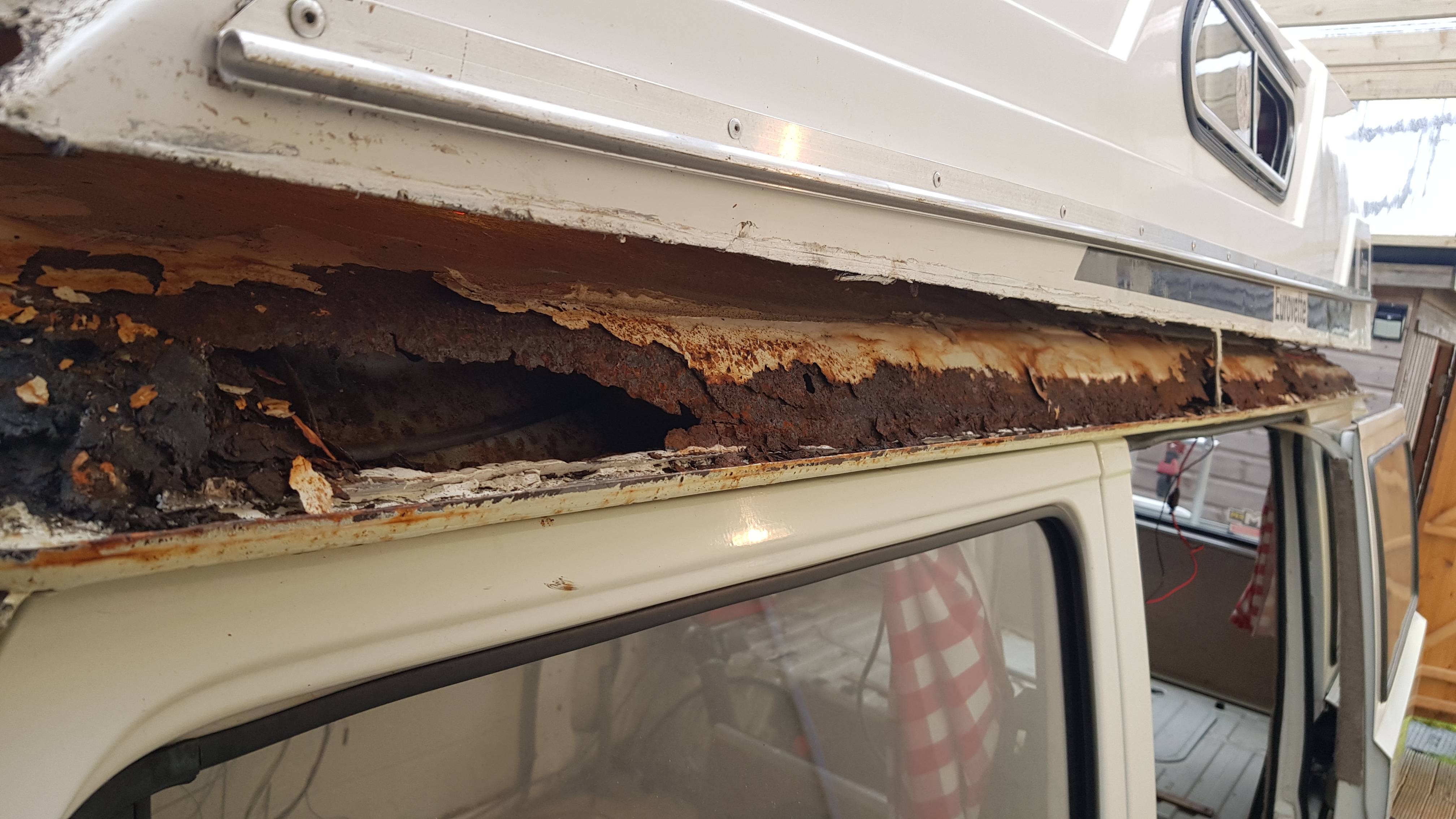 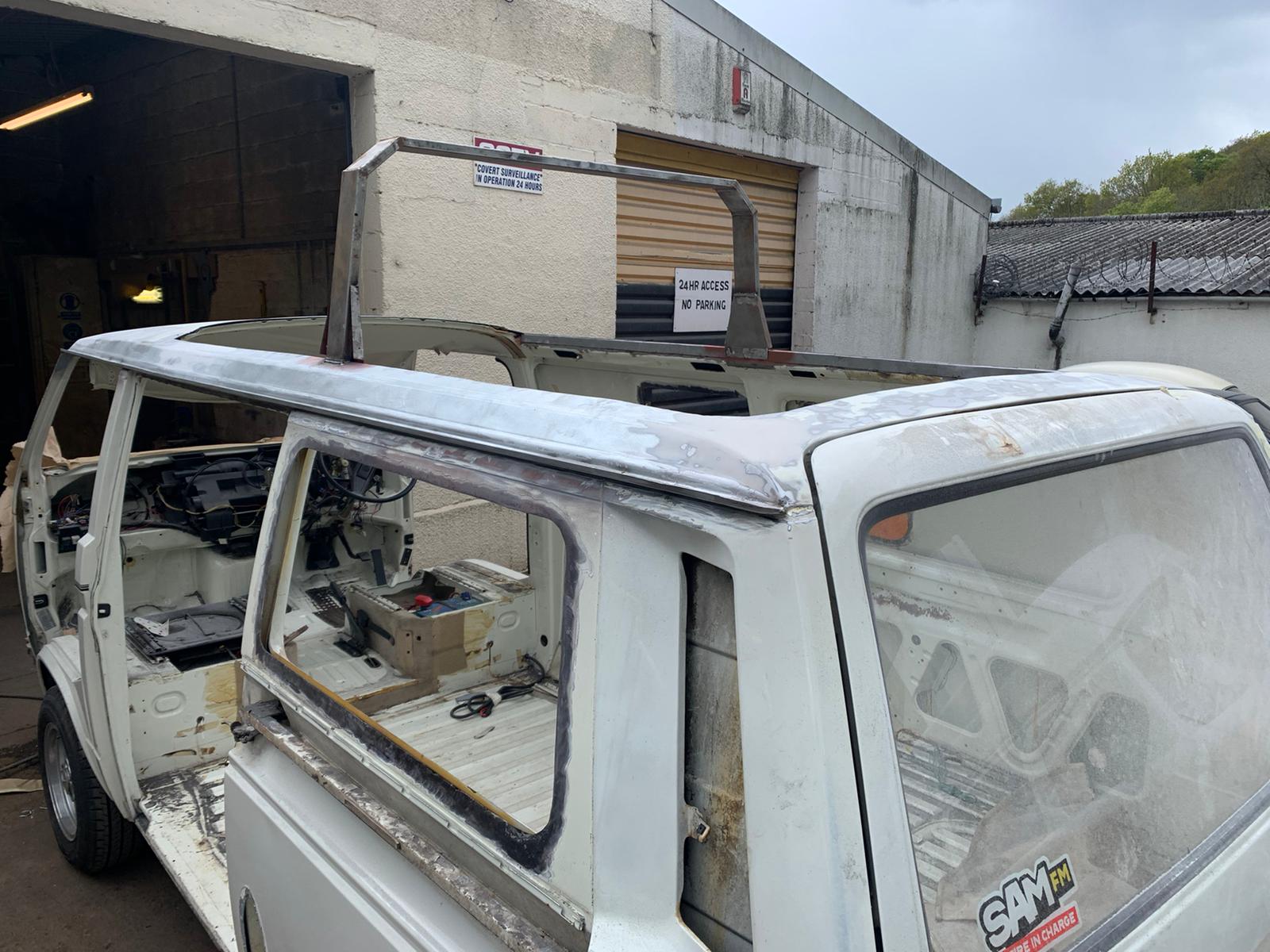 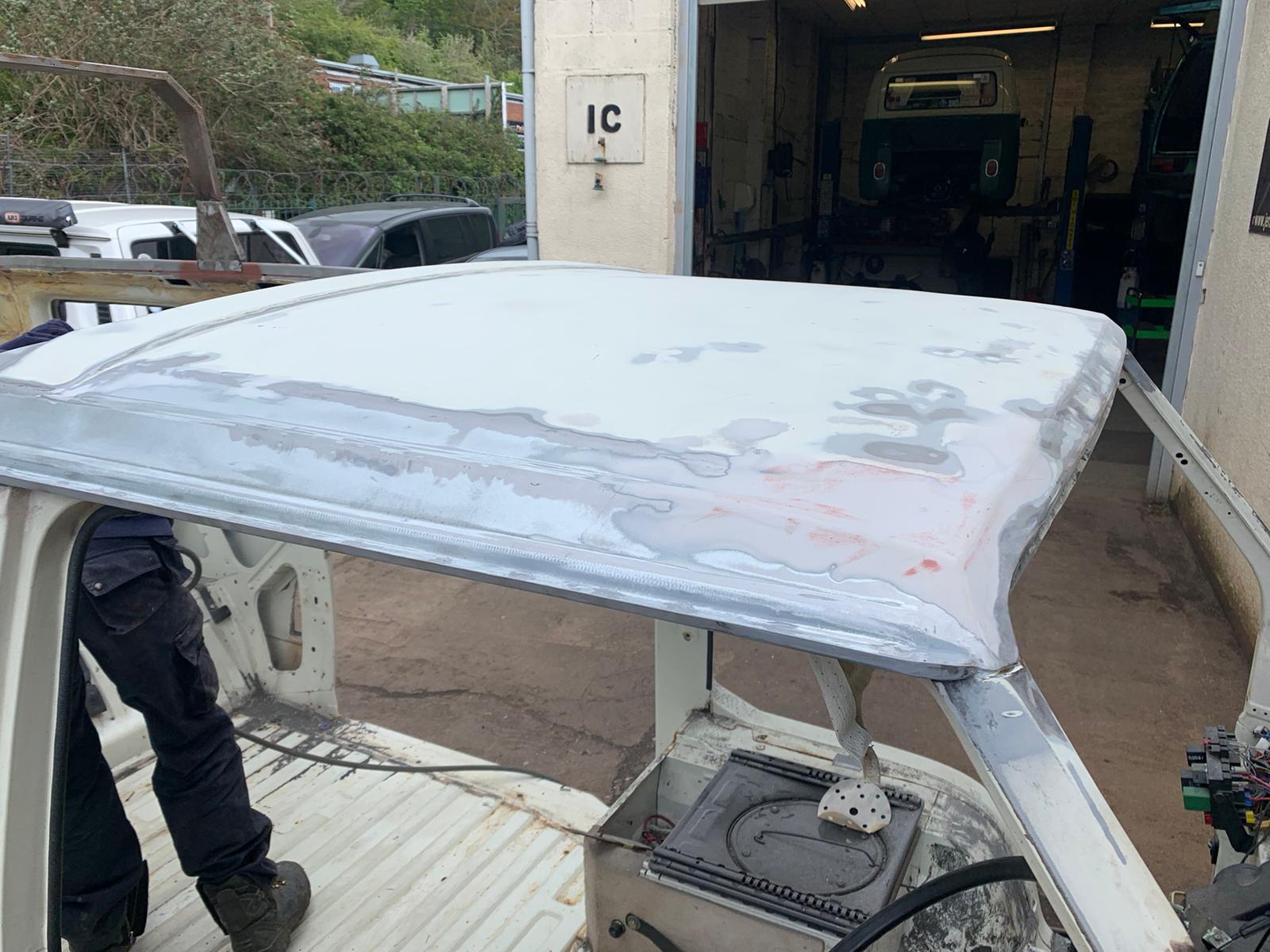 I did try and clean up the gutters but it is impossible to do anything except a cosmetic touch-up and it comes back very quickly. It isn't cheap to get them fixed properly and there is a lot of work for preparation but the rest of my van is very solid and so I decided to go for it knowing it will be rust free once all the work is done. There might have been a little but of lockdown boredom that prompted me to get on with it too!!
Top

Great job there, not for the faint hearted but just goes to show that it can be done.
1987 DG Karisma LPG with remodelled interior
Top

Sadly rusty gutters are the single worst thing about Westfalia hightops. They rust from the inside out and I think they all do it. Our California looked not too bad but there were a few tale tell clues that there were problems. We had some bubbling in a few places along the gutters and from the inside there were a few spots where an ominous line of rust could be seen where the metal and fibreglass met.
I was hoping to get away with leaving the roof in place and fixing the obviously worst bits and then one morning I went out to find the windscreen had cracked from top to bottom. When I removed it I discovered that where the A pillar joined the roof at the corner of the windscreen surround there was a big hole through three or four layers of metal right through to the inside of the van and it was the pressure from the rust I think that in the end cracked the windscreen.
Removing the roof revealed the metal didn't look in as bad a shape as some, but it was bad enough and some of the absolutely worst rust was not in the panels on the outside or even on the inside but the bits sandwiched inbetween, You could poke a screwdriver through some of the metal that actually looked OK. In the pic below I don't think the gutter looks too bad but it had the structural integrity of a digestive biscuit.
I got a quote for removing the roof and fixing what I hoped at the time would be minimal repairs but it was more than I could afford and so I decided to do the work myself. It took a long time but at last it's done.  I also replaced the panels that usually need replacing and it's been painted and now I'm refitting it, but I won't pretend it's not been a big job.
One possibility I didn't consider was taking the roof off myself, and doing some of the other relatively unskilled work and then getting a professional to do the welding, but the Westfalia hightop metal panels are very different to the ordinary T3 roof which other hightops have and I really wouldn't want the work done by someone who didn't know exactly what they were doing.
This is what it looked like to begin with, then the numbered pics are 1. A rusty line on the inside of the roof 2. Bubbling gutters, 3. A couple of the holes in the A pillar 4. Front RHS gutter. Then lastly what it looks like now and some of the steps on the way. 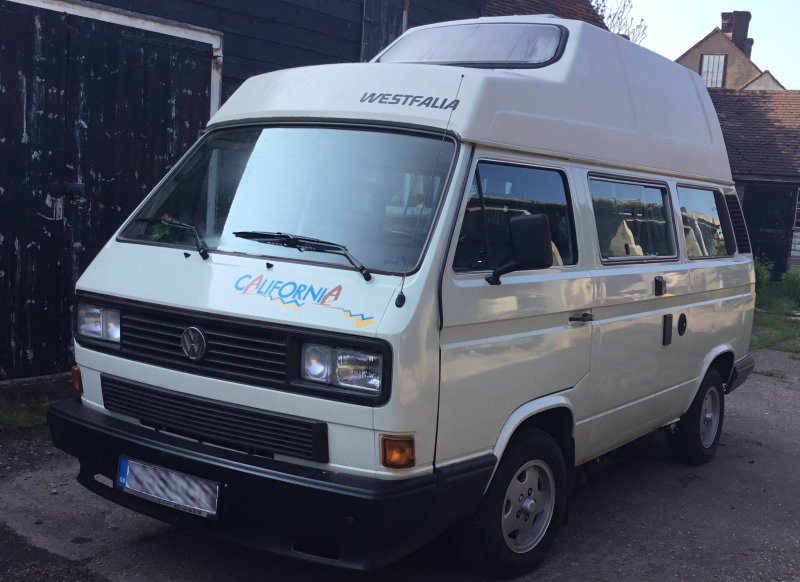 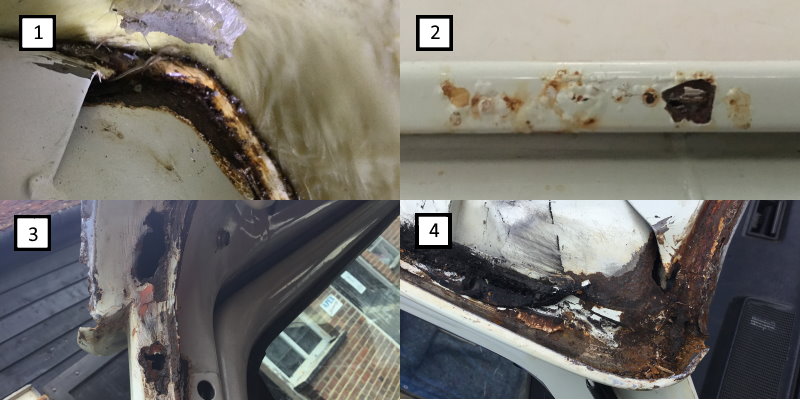 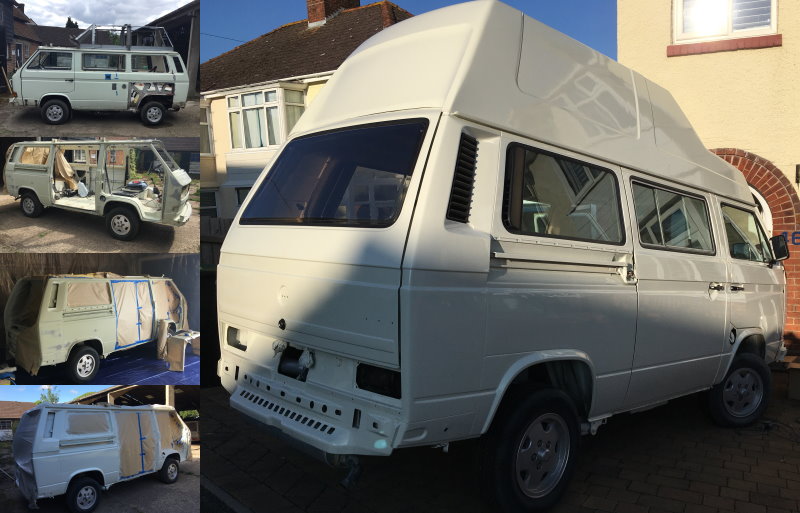 Now I am scared to even look further...

Ok - will have to bite the bullet at some point, as its only going to get worse...

I'll have to figure out the scope of the problem, but I am not a welder - I need to find someone who can do this for me.  Any recommendations in the North of England?
--
Dunx
1985 T25 Westfalia Club Joker
Top

I didn’t intend to scare you.
Maybe these thoughts would be helpful?
1. The only way as far as I know of fixing any particular bits of a rusty Westfalia hightop gutters problem without removing the roof is to create access to the section to be repaired by removing the seal and metal sealing strip from the gutter in that area and then cutting out a section of the fibreglass roof. I don’t know anyone who’s done it that way and it would obviously be no more than a get by bodge. Replacing the fibre glass section strongly and invisibly would also be a bit of an ask and would probably require painting the whole hightop.
2. The thorough way in which the roof is fixed is one of the reasons it’s such a daunting job. But (I) the rustier your roof is the easier the top comes off and (ii) if you basically know/find out what you’re doing it doesn’t require a huge level of skill - it’s just time consuming which if you’re paying someone to do it makes it expensive. Persuading friends or family to give you a hand is a good idea
3. The more you can do yourself once the roof is off obviously the less expensive the job becomes, so, again, obviously, wire brushing, cutting out the rusty bits and breaking spot welds is on a different skill level to fabricating and welding in fresh metal - which for a welder who knew what they were doing might not be too enormous a job.
4. Having said that it’s not a bad job on which to learn some welding skills because simple techniques can probably get most of it done and once the roof is back on your work is never going to be seen again so strong serviceable and accurate is OK I think.
4. Lastly the huge benefit of doing the work or getting it done is that you end up with one of the best VW campers ever made in great long term usable condition.
There are lots of people more knowledgeable than me on this forum so if any one has other ideas they’re probably going to be better than mine!
1991 Westfalia California Droptop 1.9tdi
Top
Post Reply
7 posts • Page 1 of 1