Hi guys, this is my first post, but I've been reading this forum for a while now to help with my van renovation.

The oil warning light comes on with the ignition and turns off when the engine starts, as it should do, and the engine can sit and idle for ten minutes without the light coming on. However, when I start driving it, the warning light comes on and flashes continuously. I have changed the oil (I changed from 15W40 to 20W50 to see if that would help) and the oil filter, and I've also replaced the pressure switch twice. And I've also replaced the pressure release valve spring. I'm at a bit of a loss as to what the issue is, other than something major?

Any advice or help would be very much welcomed.
1989 T25 Transporter engine swapped to 2.0 CU air-cooled
Top

Buy yourself an oil pressure gauge, screw in type..you need about 2 bar pressure at 2000 rpm.

This will give you a bit of guidance: https://www.youtube.com/watch?v=c4i211jyX38

Pull the hose from the crankcase breather to the air cleaner box...if it is puffing smoke then its rebuild time..

This is an 89 van, so the wiring will be expecting DOPS, so two oil pressure switches and a water temp gauge with a flashing LED as well as the oil pressure light.(assuming no dash change)

My recollection is that the flashing LED in the temp gauge is from the water side, while the low oil pressure light in the cluster is either on or off, not flashing

Can you confirm exactly which light is illuminating and what you think has been done to the coolant temperature / level system.

Does the light only illuminate when the revs are over 2000 rpm ? In which case it may be nothing more than a wire that needs earthing
1981 RHD 2.0 Aircooled Leisuredrive project, CU engine
1990 RHD 1.9 Auto Sleeper with DF/DG engine
Top

Thanks for the replies chaps..

I think a pressure tester is going to be my next purchase!

There hasn't been a dash change as there is still a water temperature gauge on it.

It's definitely the oil light flashing.. and the wiring is still connected to the coolant temperature / level system. (This was intermittently flashing now and again too so I had to disconnect it.)

I don't have a rev counter so I'm not certain on the revs but it can be sitting idling for ages and nothing happens and I start to drive down the street and it will start flashing and then stay flashing until I turn off the engine.

Almost certainly nothing more than the wire for the second pressure sender not being earthed.

The second oil pressure sensor is located near to where the cooling fan is on a CU and it runs past the dizzy. Look for a single wire with a spade on, probably brown in colour. Put it to a good earth and I'm pretty sure the light will not flash

The rear sensor is only functional when the revs are over 2000 rpm and pressure less than 0.9 bar. It's a normally open switch so pressure forces it closed, which is why it doesn't illuminate on idle or when pressure is "good".

There's a bodge to snip the green wire in the junction box, this removes the rpm signal, but don't do that

Someone like me may have to fix it at a later date.

One further question. Aftre driving the van, with the light flashing. What happens when you switch off and restart it .... only allowing it to idle ?
1981 RHD 2.0 Aircooled Leisuredrive project, CU engine
1990 RHD 1.9 Auto Sleeper with DF/DG engine
Top

I like the sound of that! I hope it is just the wire needing to be earthed

After switching off and restarting it idles fine and doesn't flash again until I start driving.
1989 T25 Transporter engine swapped to 2.0 CU air-cooled
Top

You can trace the wires from the junction box,7 pin connector.

Yellow wire, pin 7, goes to "high" oil pressure switch at the far rear of the engine as already described. The colour changes from yellow to brown along the way, if it is still standard.
1981 RHD 2.0 Aircooled Leisuredrive project, CU engine
1990 RHD 1.9 Auto Sleeper with DF/DG engine
Top

This may help, it's a WBX engine bay, the second oil pressure switch is about where the W is on Water Pump 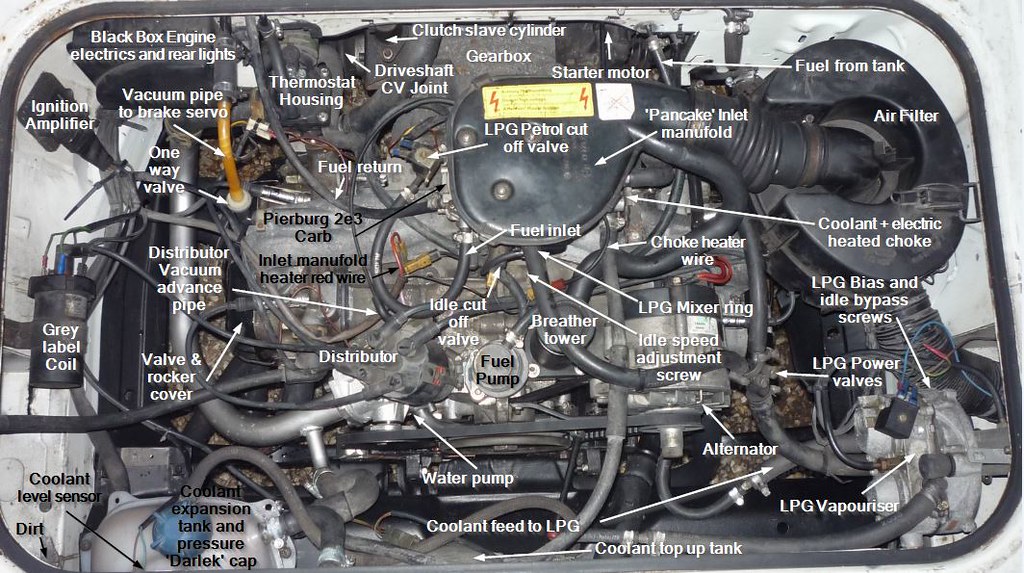 I was planning on doing it tonight after work but it's been raining all evening!

Found and earthed the yellow wire and we have no oil light flashing at me anymore!

I went out for a good 20 min test drive and nothing, worked like a charm!
Thank you for your help!

The only niggle I have now is when the engine has warmed up it idles quite fast, is there an easy tweak to slow it down a touch?
1989 T25 Transporter engine swapped to 2.0 CU air-cooled
Top

... helped by the fact that I have air cooled and water cooled.

I'm chuffed that it's sorted for you, that'll let you enjoy the van a good bit more.

On the fast idle I'm assuming you are on standard twin solex. In which case it's a matter of making sure there are no air leaks and then adjusting the idle screws. I'm a bit rusty on that side of things though
1981 RHD 2.0 Aircooled Leisuredrive project, CU engine
1990 RHD 1.9 Auto Sleeper with DF/DG engine
Top

Yeah it's the standard twin solex..

It’s good that you have sorted it , do remember to go show the resolve on the other groups and places you also posted the same tho , or people that search there with a similar issue won’t know what your outcome was, and the folk that helped and answered won’t feel like they were ignored !
Steve
tel / txt 07947137911

Does your CU have the correct twin vac dizzy still fitted and correctly piped in? If so, check the throttle can return completely to idle position once the chokes come off, and the vac advance signal from LHS carb is closed off, or no vacuum at idle. If this vac hose is still sucking it'll advance your timing by about 12° which increases idle speed dramatically. Timing should be set with vac connected to 5° ATDC.
If it's had a SVDA dizzy fitted instead, that translates to 7°BTDC (vac off), but you'll struggle to get the idle speed down.
The other common mistake done by some is to adjust idle on the two carbs, rather than the "third carb" which controls the idle circuit, but that has been covered at length elsewhere so no need for a lengthy explanation here. Try the timing first, and let us know how it goes.