Photo of my Aircooled engine - Thanks folk for helpful comments

Photo of my Aircooled engine - Thanks folk for helpful comments 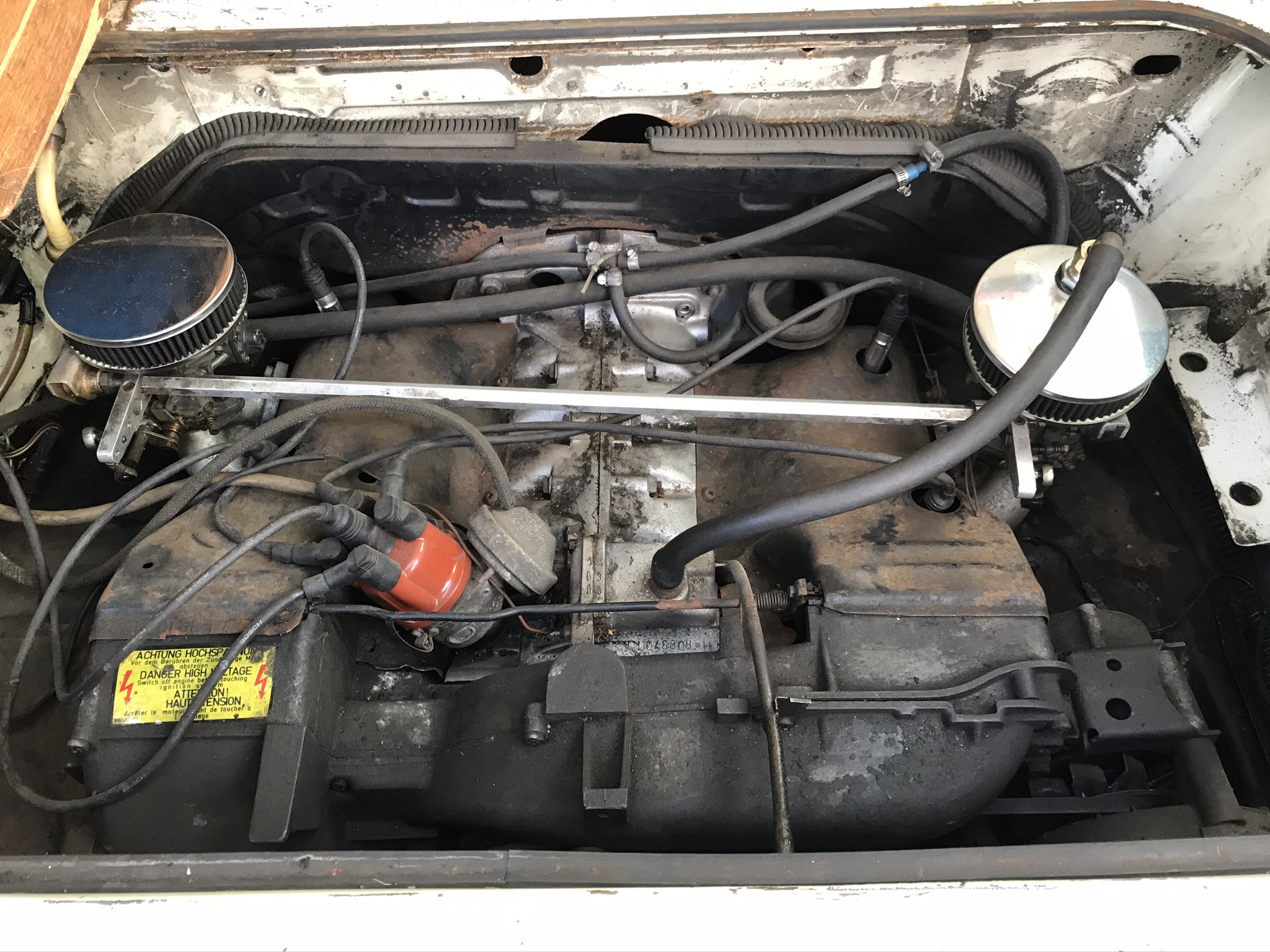 Hello - I thought I would try out the simplied new system for posting photos.
I know when other folk have posted photos of their engines there have often been things spotted which are not as they should be , so am interested to see if there are obvious things I should be looking to put right!
Cheers, Julia
Last edited by H Julia on 07 Sep 2020, 13:13, edited 2 times in total.
1981 2.0 l air cooled Devon
Top

One easy spot is you should have rubber sleeves over the spark plugs to stop hot air from the hot side of the engine coming through to the cool side. I read an American blog somewhere that suggests it makes quite a difference to running temps. That and your engine seal has a big gap in it, so does mine but not as big - but I've heard the proper seals are unobtanium so maybe one to live with!
1983 2L Air Cooled (CU) T25 Hightop
Based in Bristol
Top

They say a picture is worth a thousand words....

You have non standard carbs with deadly pancake filters....no flame arrest in case of a backfire...

Wrong spark plug leads, and as stated above no bungs...

The engine tinware should be black and clean....

At least you have your engine seal in place...

Not shown in photo..do you have the rubber bellows to the heater system turbine

Do you have all the underneath tinware fitted and the heat exchangers connected...

Bet you wish you hadn't bothered with the camera now...

Thanks to both of you ( said through slightly gritted teeth

). I did anticipate that I might hear things I didn't want to !

Would these be the spark plug leads I need?
( currently out of stock)
HT Lead Set - T3 / 2.0l Aircooled / Brickwerks

I have to hold my hands up about the purchase of the pancake filters - they were advertised as for Aircooled engines. Can you point me in the direction of which filters I should be using with my carbs? The very unsmiley faces after the comment about the filters has me worried.

The carbs were fitted by Laurie Pettit some years ago, he was very in favour of them - he recommended replacing the Weber carbs with them.

I think the engine seal looks as if it is available through Brickwerks ( if I'm looking at the right thing). Would you consider the gap significant enough of an issue to replace the seal ?

I think all the correct tinware is in place. I do have heat exchangers fitted , though I noticed at the weekend that the casing of one is very corroded. I do have a photo ( she said nervously!) . I'm not sure how much of an immediate concern this is? Does this risk toxic fumes in the cabin?
I don't know the answer about the rubber bellows. Is that an easy check?

Is the crankcase pressure relief feeding into the his carb easy to resolve?
i'll be truthful and say I dinnae understand the significance! Beyond me. I really just want to shout 'help' and have someone fix it!! If only!
Sorry for all the questions and thank you again for giving your time and attention to this.
I will report back.
Julia
And I thought my van originally had a 2 litre engine ...!
1981 2.0 l air cooled Devon
Top


If you fancy a trip across to the isle of Arran there's Andrew at Campershack there. https://club8090.co.uk/forum/memberlist.php?mode=viewprofile&u=10006

He knows these vans inside out and will fix things properly. He might prefer the WBX exgines, but it won't harm to ask

After all, you are closer to him than most
1981 RHD 2.0 Aircooled Leisuredrive project, CU engine
1990 RHD 1.9 Auto Sleeper with DF/DG engine
Top

Nope, early models with metal grills had the air filter bracket with either engine, just not used with the CU engine.

Its just that the 82 2 litre I have just finished was a ct originally, with the same bracket,

Should have asked whether it had a hydraulic clutch....

Well if you no longer have the solex carbs  and airbox, even a KN foam filter is better than an empty tin can..

Part of the design and function of an airbox and filter is to act as a flashback arrestor, eg a carb backfire..

Engine seal...needs to do its job... I use these people: www.sealsdirect.co.uk.

You need 4 metres, cheaper than VW original and much better...

Heat exchangers need to be clean and airtight, but exhaust gases will not enter the cab from here.

From about 7 minutes shows the exchangers setup here:  https://www.youtube.com/watch?v=R0rYAwK5vCc

Intake bellow is between the heater intake fan, plastic turbine on front of alternator, and the oval hole in the rear bodywork.

More important is what is blowing out of the crankcase breather, this chop is usually a bodge to hide a worn motor,( on the original set up if the engine is worn, oil collects in the air box and filter)

Yes, original 2 litre, with original dirt and rust..  I assume you have a hydraulic, not cable operated clutch

Re: Photo of my Aircooled engine ( +now van) - comments valued!

Hello and thanks again.
Yes hydraulic clutch.
I will contact Andrew at Campershack and see what he says.
The van is running well despite the identified issues, but the more I read about what can go wrong the more I realise how out of my depth is am!
I had a baptism of fire when I first got the van back in 2012 and it took a while to get things running well - I have found a report Laurie Pettit wrote to those who had worked on the engine when putting right wrongs that were meant to have been righted if you follow me, it may be interesting to those who understand these things. ( I so wished I had known about the forum then!)
Info from report
'6: The oil breather pipe which should have been a 1/2” pipe from the breather to the air filter had been vented to atmosphere through a pipe of smaller bore.
The original design of the engine maintains negative crank case compression
and this would have caused the crank case compression, evidenced by the oil residue on the new inlet valves.

7: The carburettor is one that I will never use. It is hard to tune, is subject to icing, has no crank case breather and has a terrible manifold design. It should be replaced with twin carburettors, suitable to that engine.'
------------------
This is an interesting bit of history

- I was looking out the registration document last night to see what it said about the engine size . My van had only had one owner before being sold to the guy I bought it from. I decided to Google his name and duscovered he was a formula one commentator and I found the following reference to my van!! I was quite excited!

Quote from motor sport press
'Having been born into a family which was involved in racing, he worked as a freelance journalist for Autosport in the late sixties, and then joined the famous magazine full time in 1972, staying with them until 1977 when he went freelance again. He travelled from race to race – whether F1, sports cars, F2, F3 or touring cars – in a VW camper van, which became a very famous fixture in the F1 paddock.'
How's that - very famous!
Good wishes to all,
After the amount of tine I have spent on the forum reading about our vans I really should know lots! Thanks for reading!
Julia 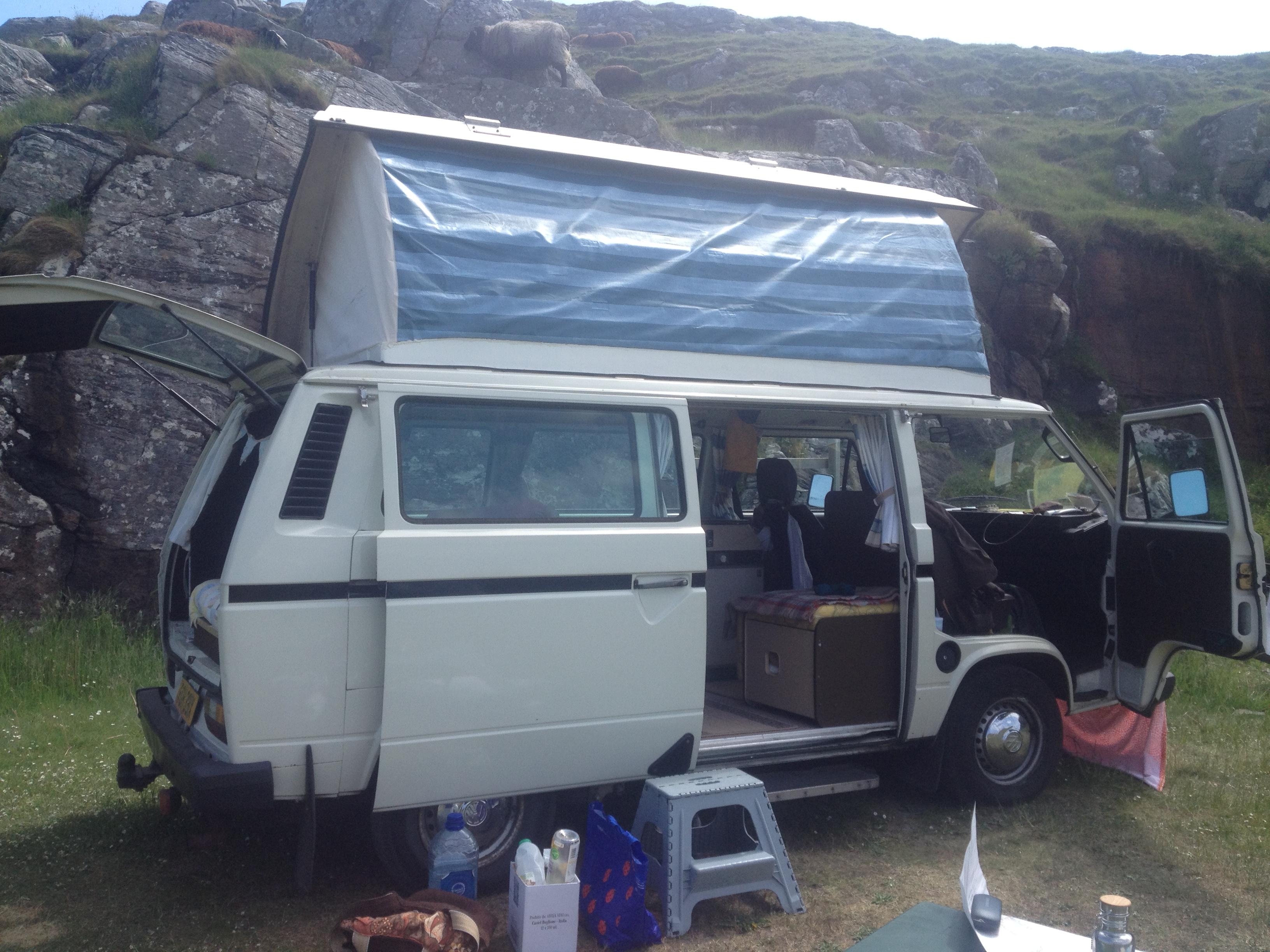 That looks like the original plastic tee piece joining your fuel pipes. I swapped mine to a brass one with a few barbs on the connectors, you get a much more secure fit of the pipe with these. My old original plastic one was so flexible it looked like an accident waiting to happen.
Top
Post Reply
10 posts • Page 1 of 1