An Engine Rebuild Thread for Beginners

Both head were off and enough work had been done for one day.

Stuffed all pushrod holes with rags 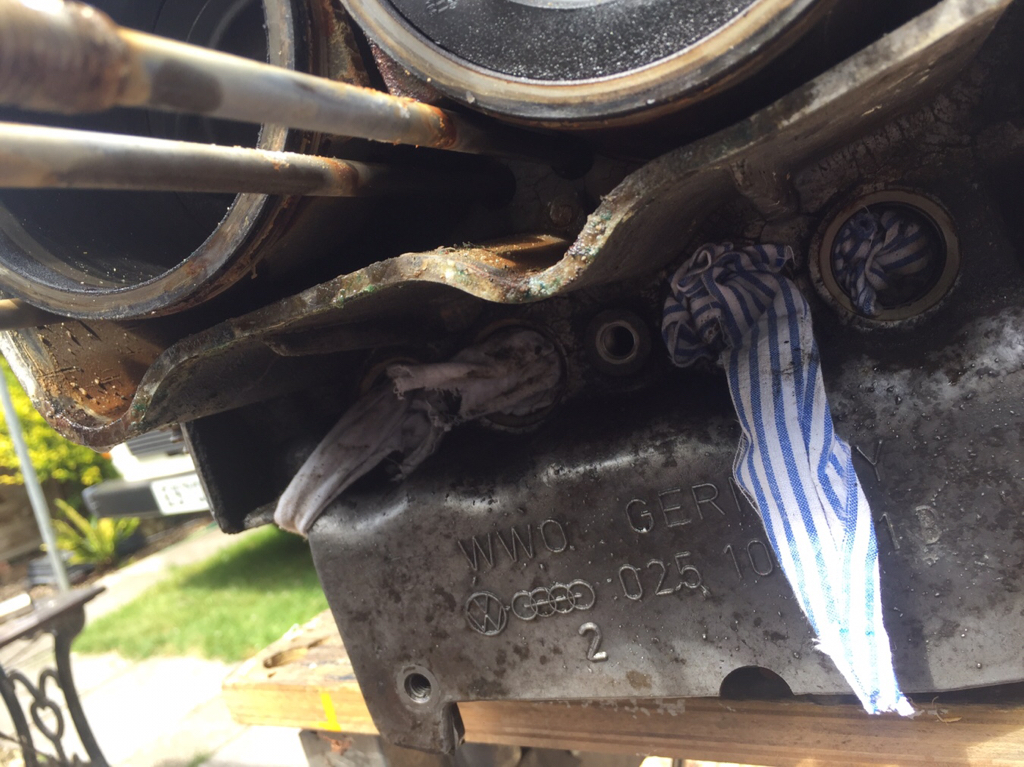 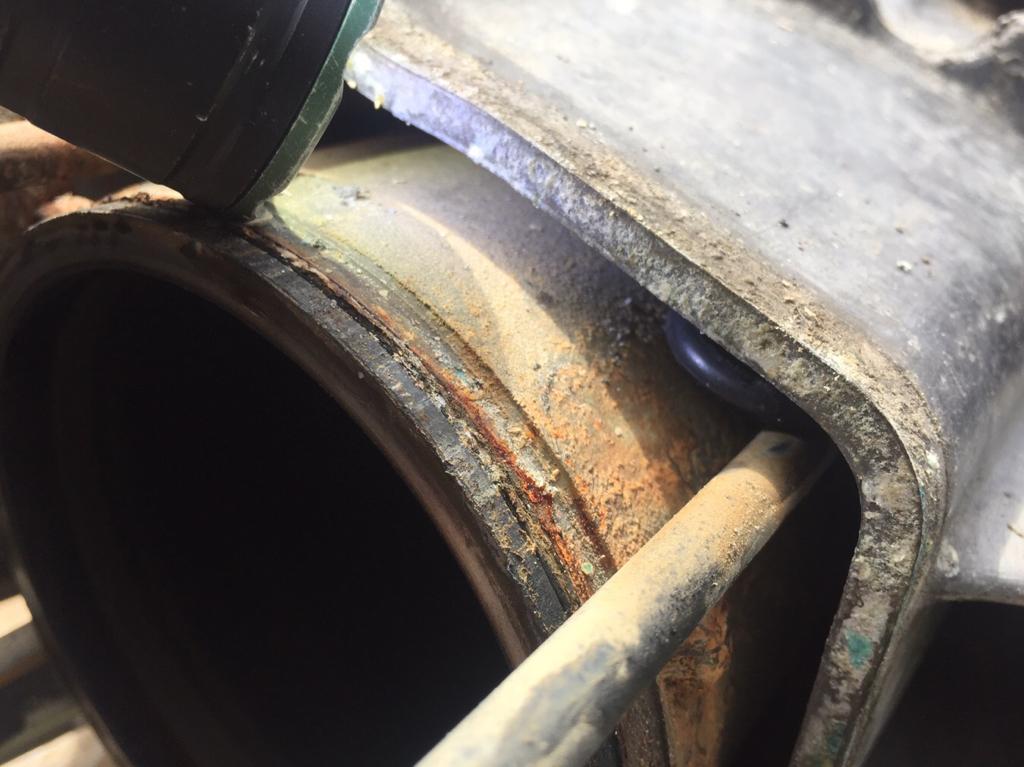 Just visible in the top right of the picture above is an o ring that must have been floating around for an unspecified number of years. It looks to be one from one of the temperature sensors.....I won’t be reusing it. 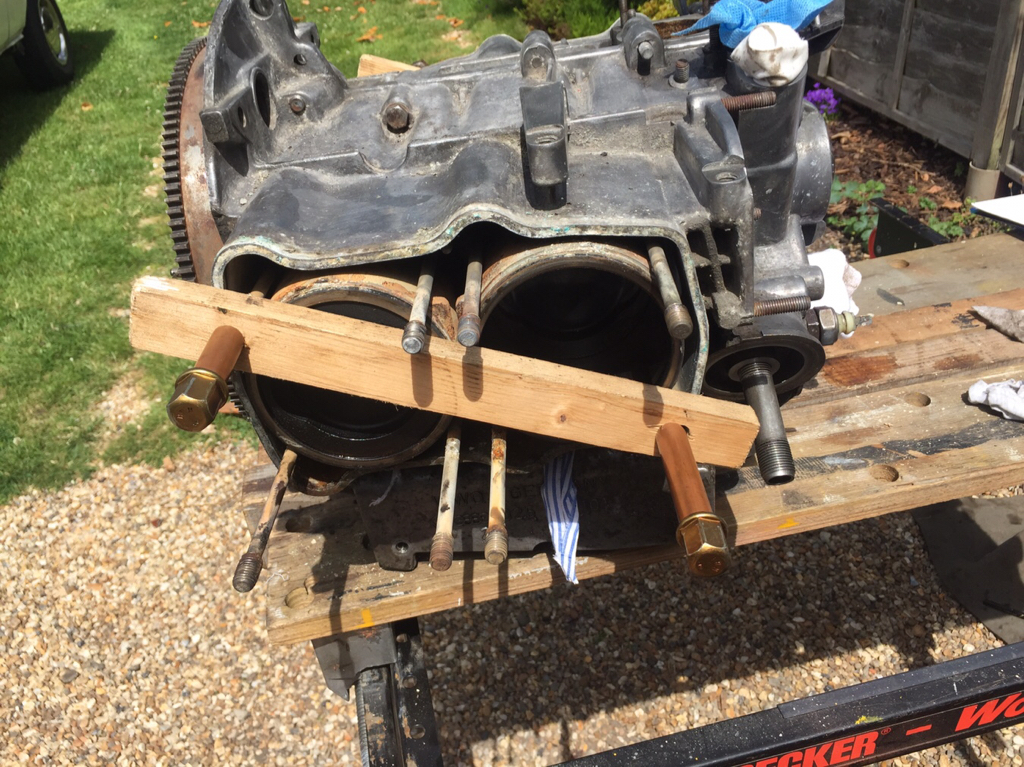 Made from an off cut of timber, approximately 30 cm long. This piece was 20mm deep so cut two pieces of standard 15mm copper plumbing pipe - one 35mm, one 65mm.
Drill two holes in the timber of 12mm diameter, centres 22cm apart. The wood then slips over the top left and bottom right stud. Fit the pieces of pipe and screw two of the stud nuts back on to hold everything in place (Patent Pending). 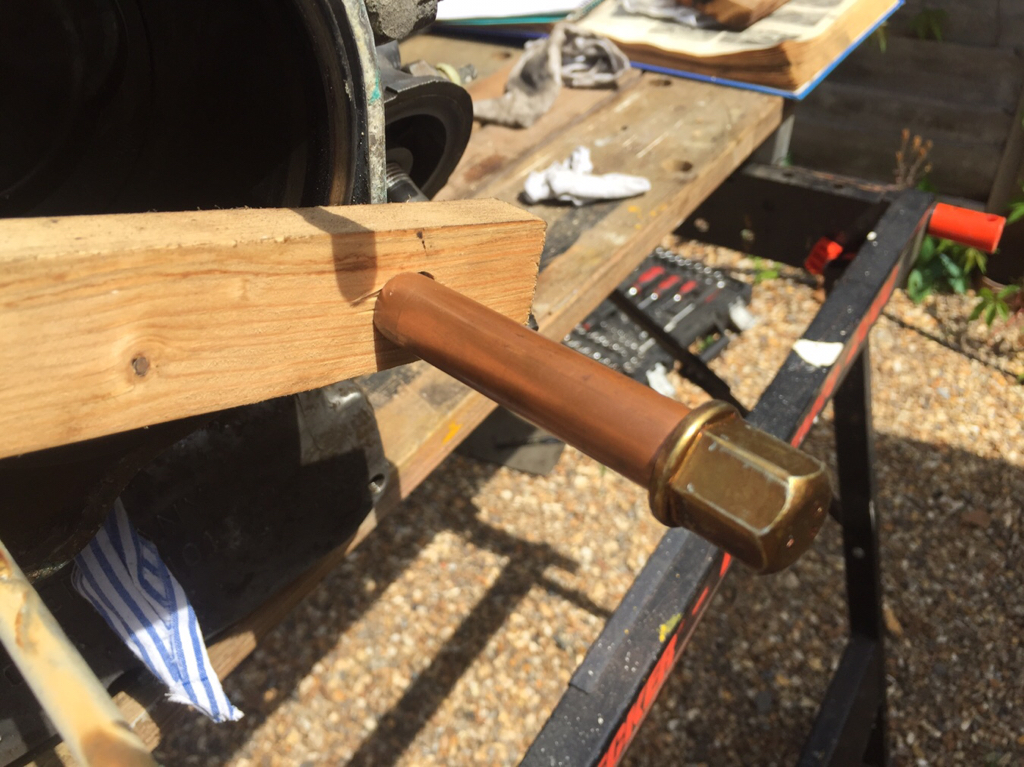 An Engine Rebuild Thread for Beginners

Section 2: Removal of the Exhaust Studs

Each head has 4 studs that are used to bolt the exhaust to. These are particularly prone to corrosion due to the heat that they are exposed to and they can be difficult to access when the engine is in the van.
I have some previous fun with exhaust studs when I fitted a Stainless Steel exhaust to my old DG engine. I managed to snap a stud and had to drill it out and helicoil (use a threaded insert) to fix the problem whilst underneath the van.......good times!

The stainless exhaust will be going on this engine once it has been rebuilt therefore I want to remove the old steel studs and replace with new M8, 40mm Stainless Steel studs (approximately £1 each off eBay, 8 required).

There is a technique for removing studs that was mentioned when I asked the question on here but nobody explained how to do it - I had to ask YouTube.

Studs have no heads on which to put a spanner, therefore we must create one. If possible, soak the base of each stud in plusgas for a few days before attempting to remove them. 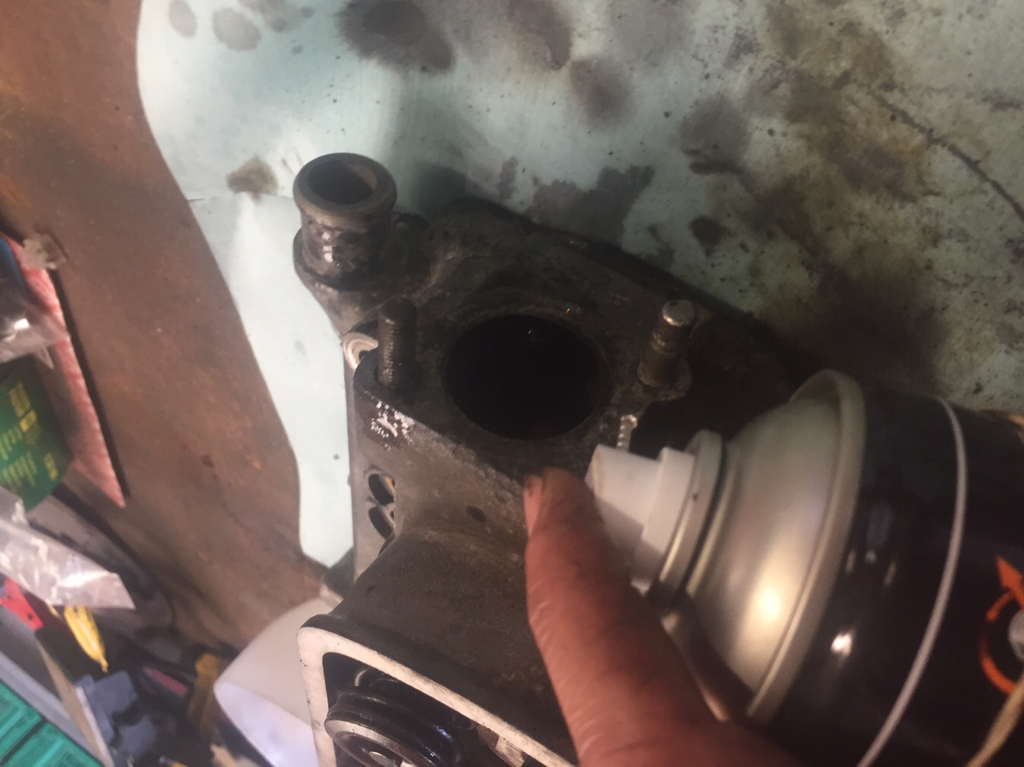 Screw first one of the M8 nuts onto the stud, followed by the other. Then, unscrew the lower one and tighten the upper one until they meet 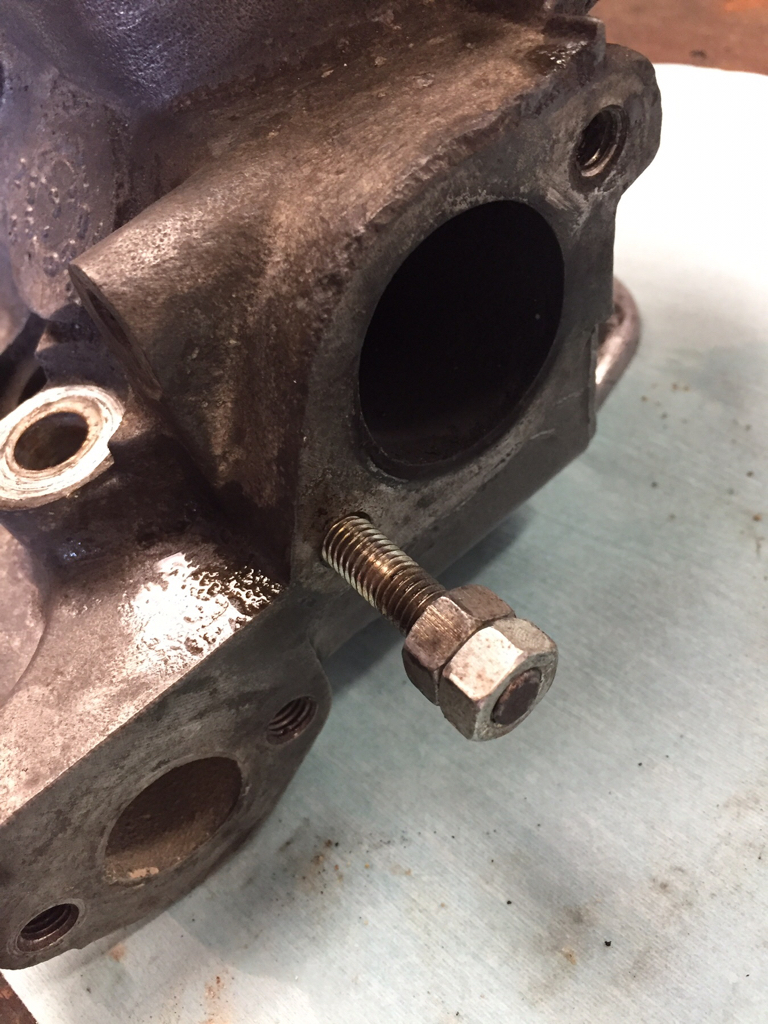 Then, take both spanners and work them in opposite directions - loosen the lower nut and tighten the upper nut 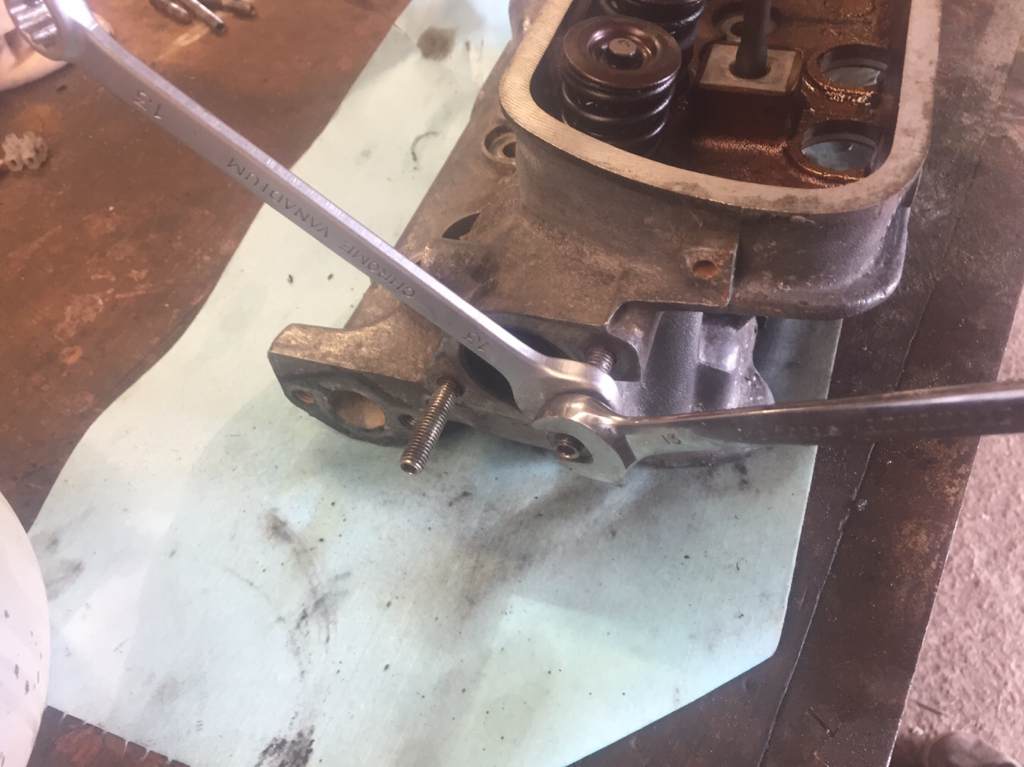 This will ‘lock’ the two nuts together. The lower nut can then be used as a bolt head - make sure your spanner is just on the lower nut and as you unscrew the stud will unscrew from the case. 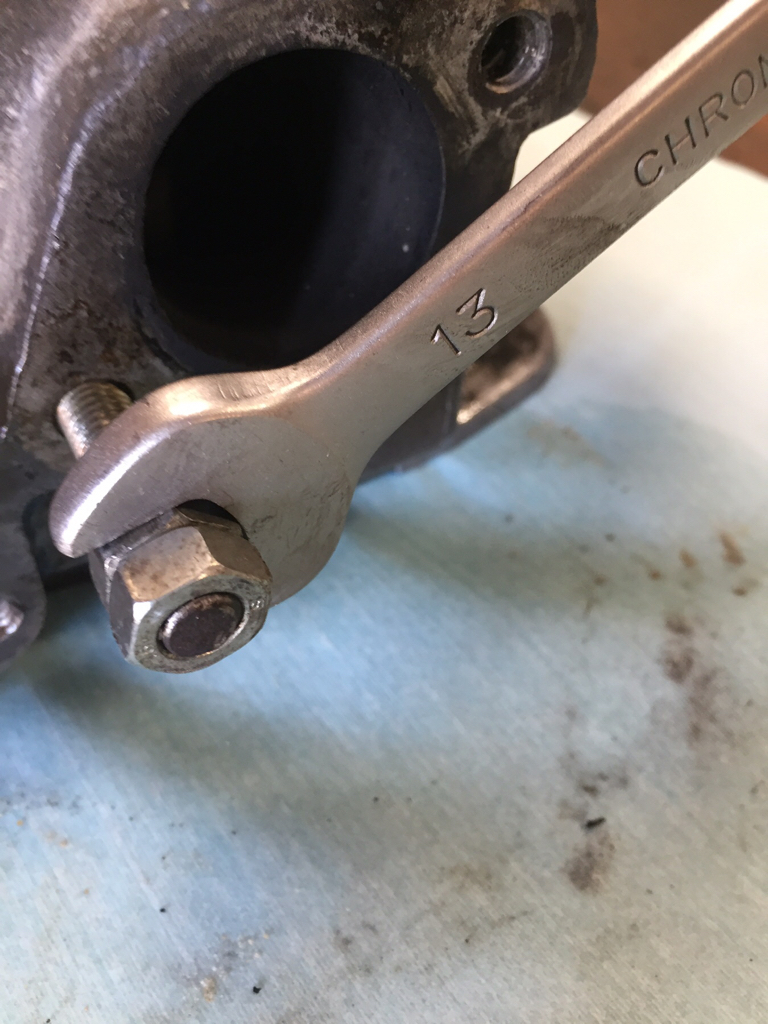 This technique may not work initially as there can be lots of corrosion - cleaning with a wire brush, plusgas followed by more plusgas then a bit of plusgas, or some well directed heat can all help.

WARNING: Many many exhausts studs are corroded beyond hope and will snap. The Wiki covers various methods for removing broken studs so I won’t duplicate.......however, if one does snap, it isn’t the end of the world and perfectly satisfactory repairs can be made with a little care and attention.

I was extremely lucky in that all 8 exhaust studs came out incredibly easily - this suggests that they have been replaced relatively recently. I fully expect to find that some of the holes have been previously helicoiled once I clean the heads up and have a closer look.

New Stainless Steel, M8 40mm studs on order - I tend to buy the ones that can be screwed in with a hex or Allen key.......saves all this messing around with spanners and nuts.

Forgot to mention - once the exhaust stud is out then it can be quite difficult to retrieve your nuts. If you grip the lower one in a vice you should be able to unscrew the top one sufficiently to free them from each other. 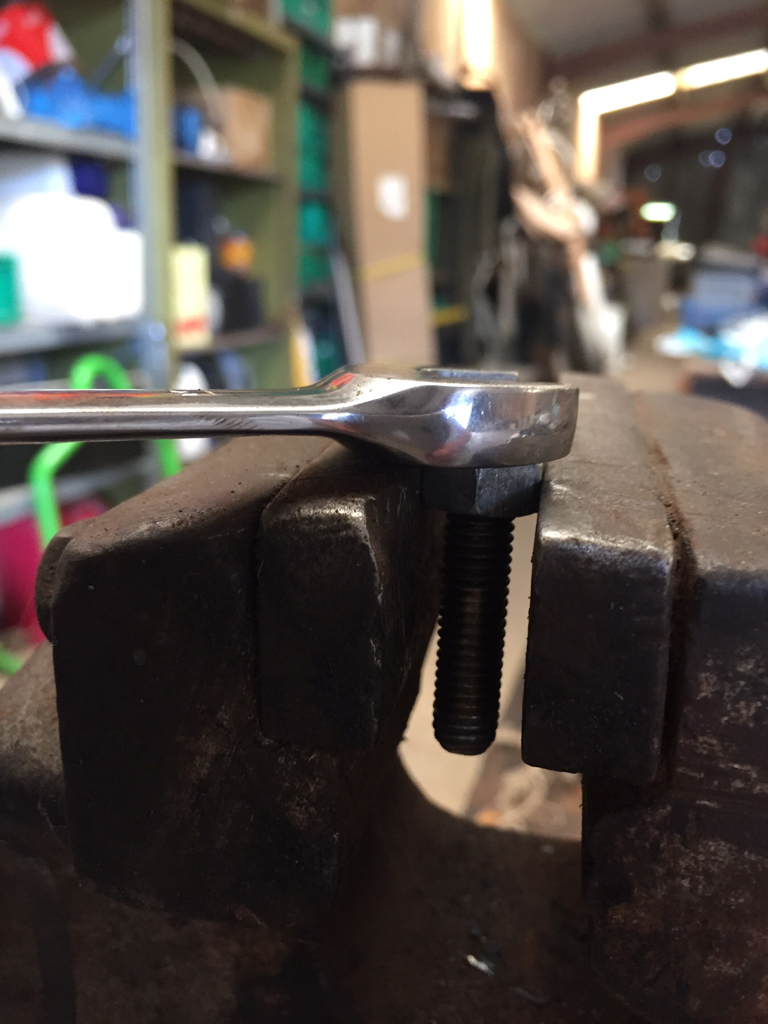 Nice to see another strip down in progress.

Worth noting that you can also get ‘step studs’ which are a size up on the head side, so you can tap an oversized hole in the head if you don’t fancy helicoils.
RIP - George - 1.9DG '85 AutoSleeper Trident - rusted away

Removing the heads showed the extent of the corrosion and gunge build up on the face. 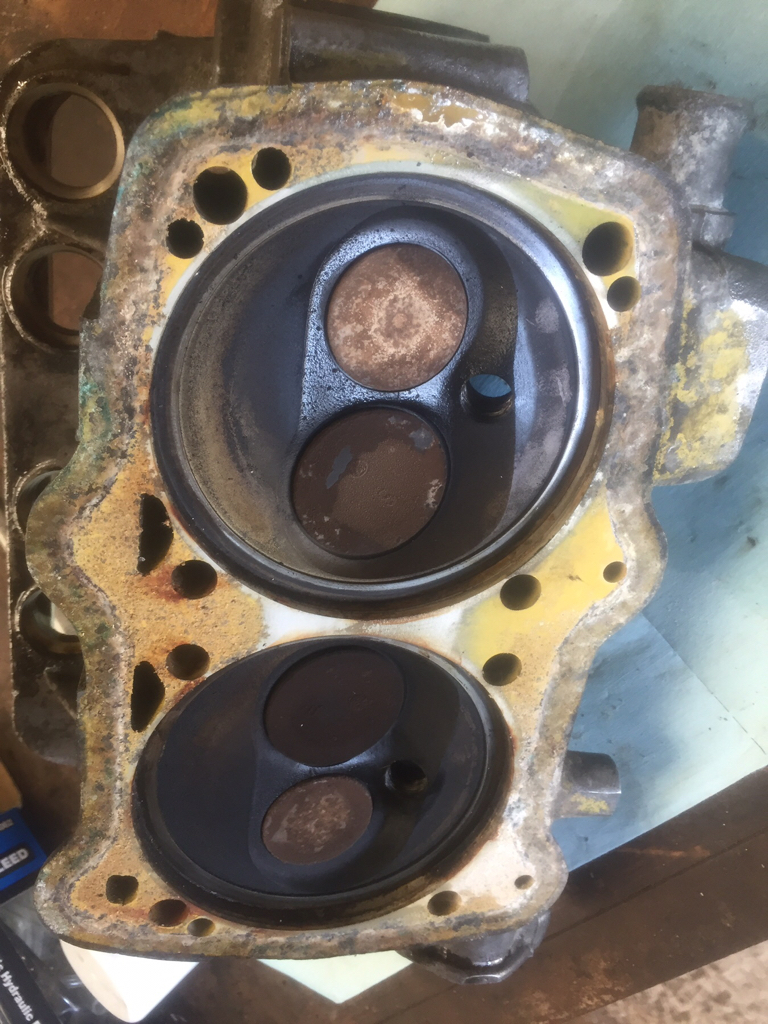 These need to be spotlessly clean to ensure that the new gaskets have a true surface to seal to. On the workbench, covered in clean, disposable paper I fitted a filament wheel into the drill and used this to take the worst of the build up off. 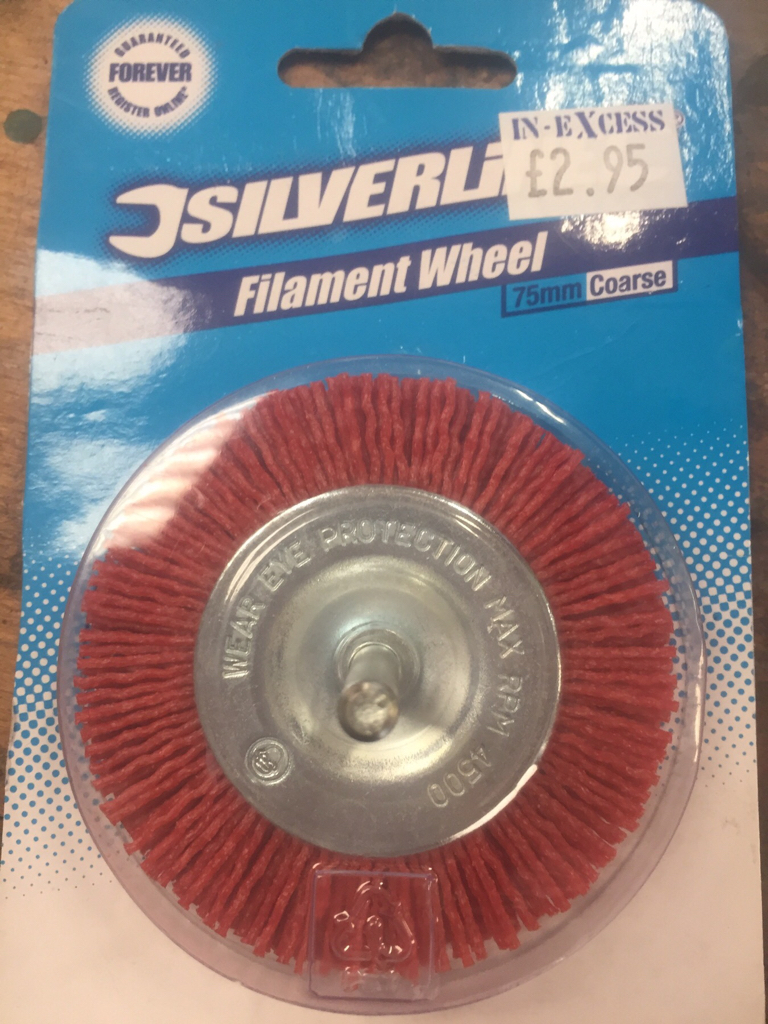 These are less harsh than a wire wheel attachment but I still used it quite lightly, just to remove the worst areas as I felt it would score the mating surface if used in anger. 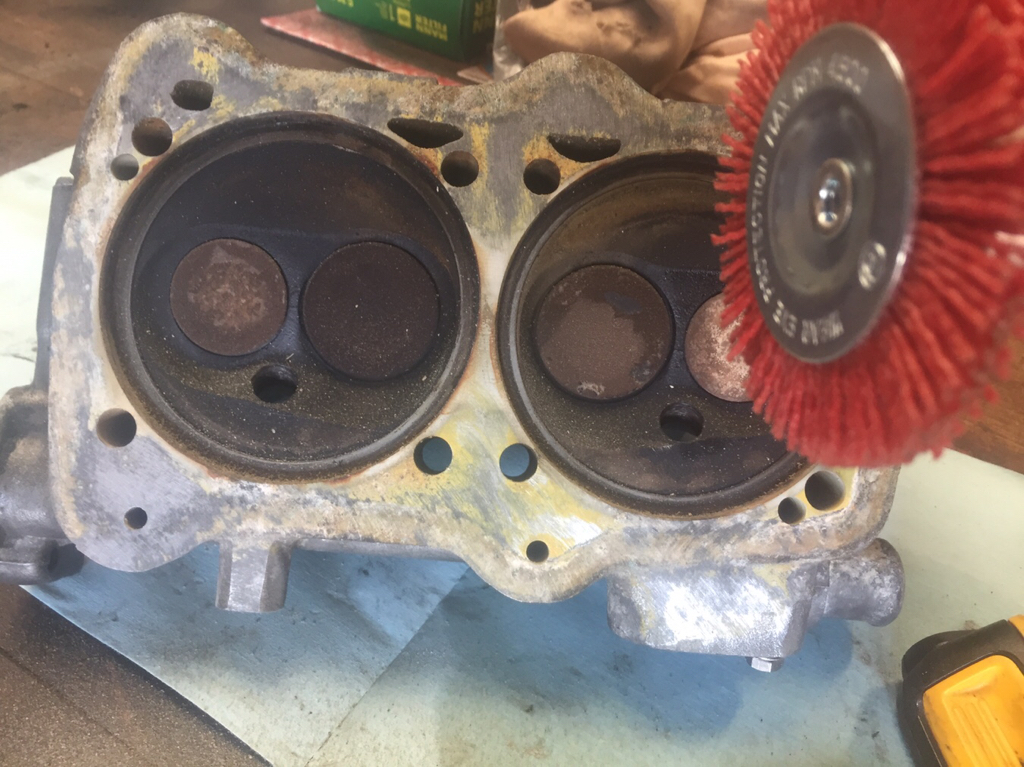 I then soaked Wet and Dry sandpaper(400 Grade) in paraffin and wrapped it around a wood block to ensure a flat abrasive surface. 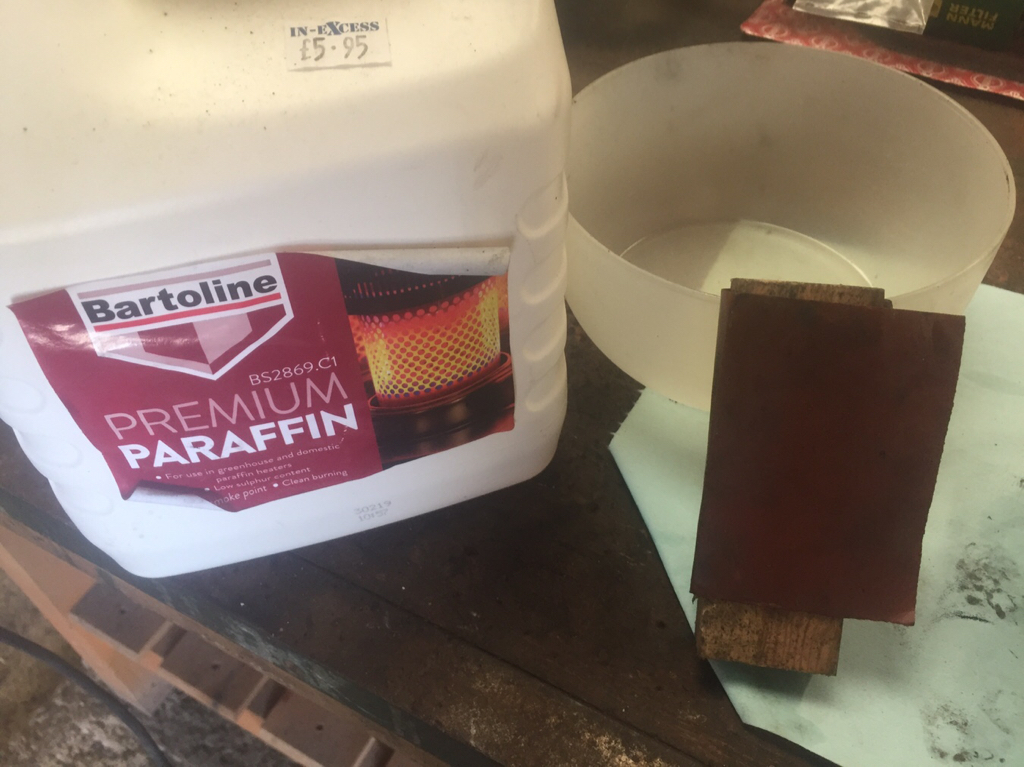 Using light, circular motions I worked on all discoloured areas, washing the sandpiper in paraffin regularly to remove the detritus. 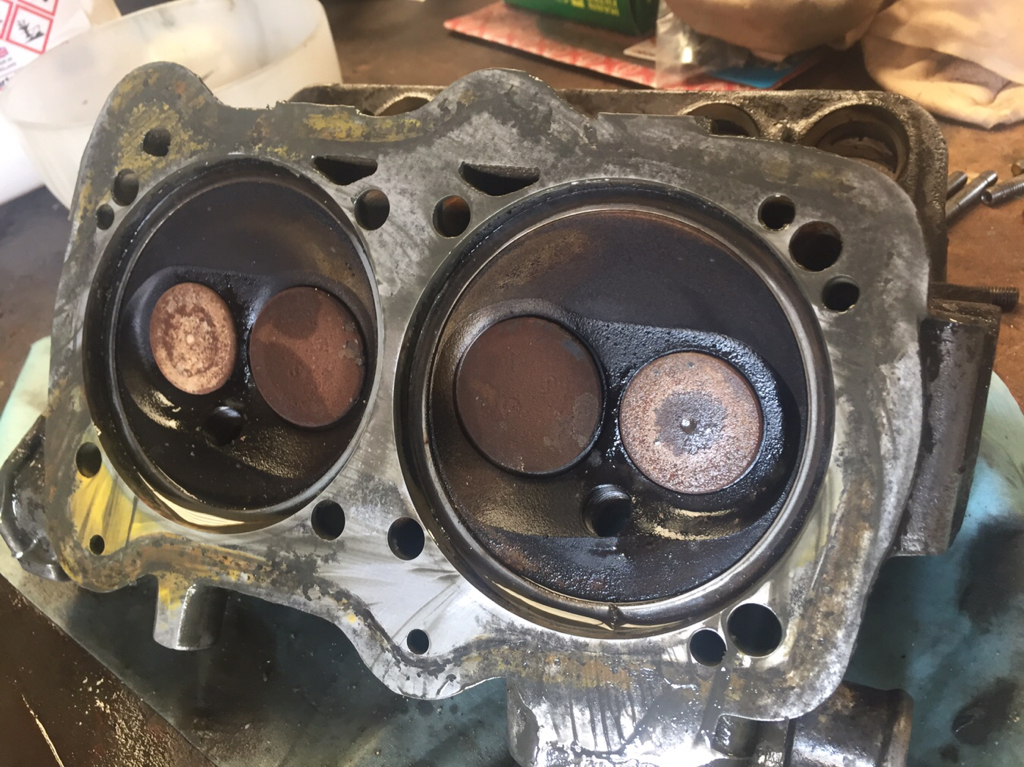 This process was relatively quick, 15 minutes per head - After the majority had been cleaned up I swapped to 600 Grade paper until I got to this stage 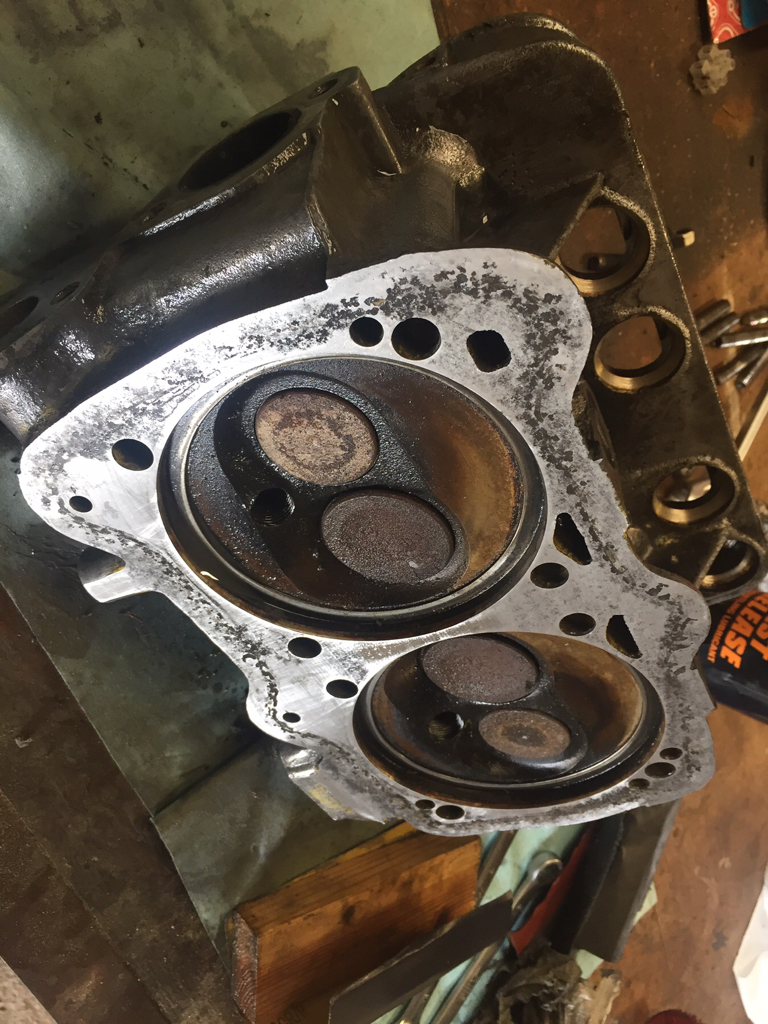 Now, the majority of the mating face is clean but there is still minor pits and marks which I guess are where the old water jacket gasket sat, old sealant etc. I have no idea if this level of marking or pitting is acceptable and will be evened out by the new seal and sealant.......or if I need to source new heads...... 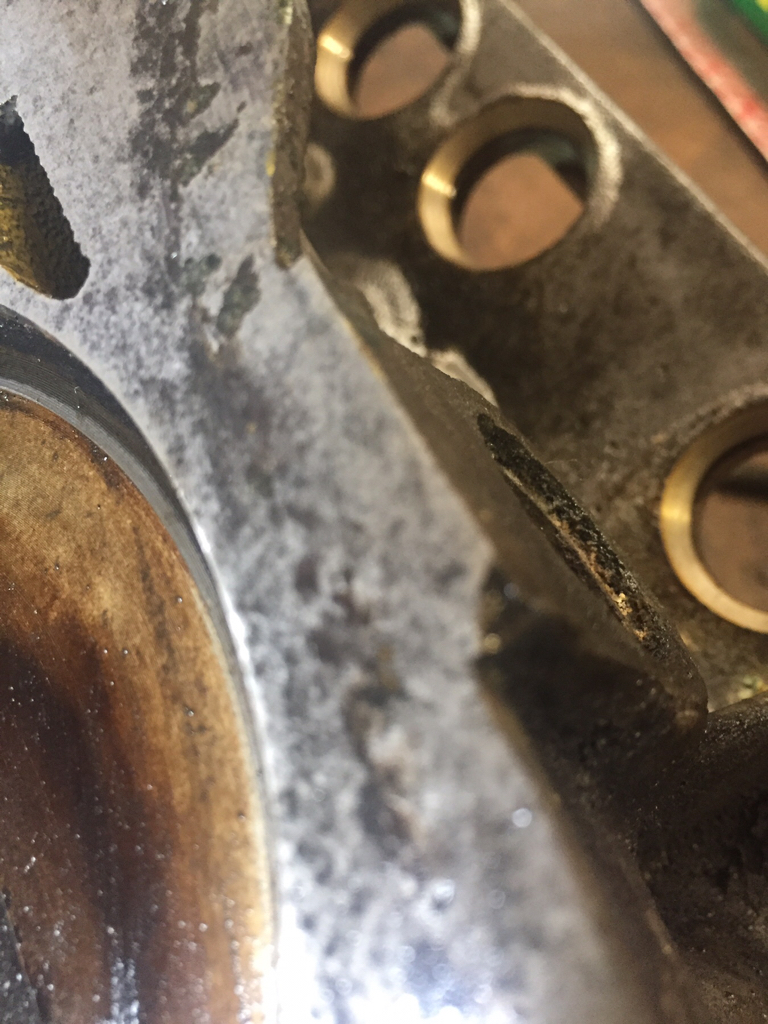 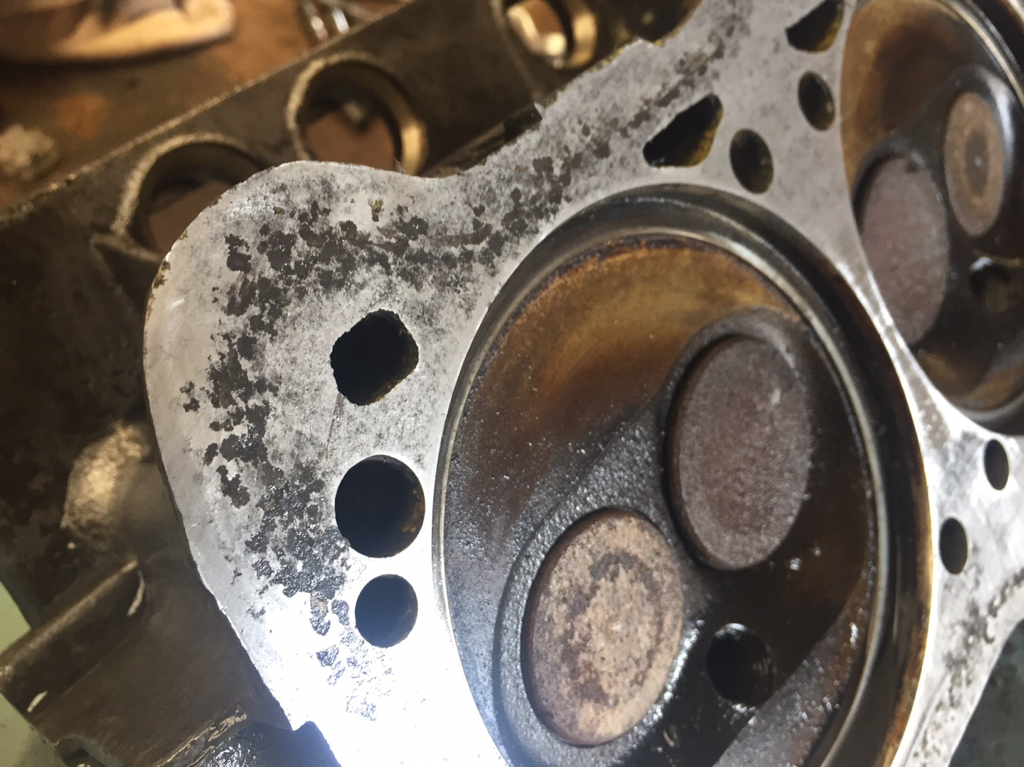 I also spent some time using 600 Grade sandpaper and paraffin on the other face of the head - the thinner face that sits in the rocker cover. This had significantly less build up and just needed a light sand over to clean it up. 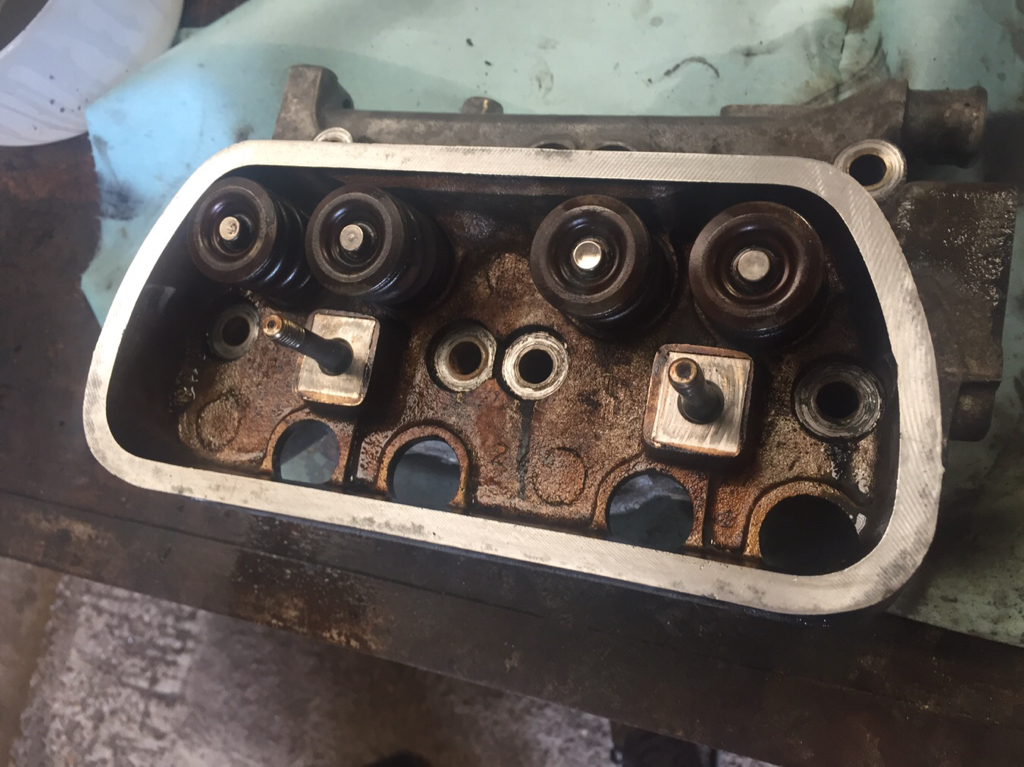 T25Convert wrote:Then onto the faces. Now they looked pretty good dirty, but the dirt was clearly hiding the holes! Quick sand on a nice flat surface. Before and halfway through: 
From my rebuild thread. Yours look similar I think?

T25Convert wrote:Then onto the faces. Now they looked pretty good dirty, but the dirt was clearly hiding the holes! Quick sand on a nice flat surface. Before and halfway through:


From my rebuild thread. Yours look similar I think?

Did 12,000 miles in my ownership plus as far as I know still going strong.


Good to know - yep, mine seem pretty similar. None of the pits are that deep and actually most seem to be filled with old sealant etc.
Think I’ll try a final polish up with 1200 Grade on a flat surface and see what they look like then.

Nice work Snowmark - those heads look fine. Here's a pic of mine during rebuild:

I'd check those barrels just to make sure the new seals can seat correctly - i went for new ones on mine as two of them were pretty rough (pics on thread).
'86 DG, Weber Carb
Top 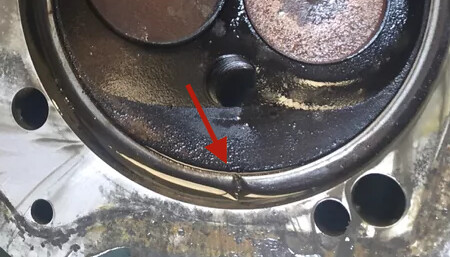 I wonder is this damage the source of your coolant bubbles? Is the deal dented/damaged here or as I seeing something else? If it's not damaged, it might be useful to lift the compression rings from the heads and examine them and the area under and around them for fluid path wear or damage. Do not use a screwdriver or anything sharp or hard to remove them as this being done on a previous rebuild is what caused my head seal failure. The aluminium heads are soft and easily damaged with sharp steel tools. Best to use a plastic or soft metal tool. The only thing holding them in there should be a bit of carbon build-up. Maybe take close-up photos of the seal area (similar to the ones you took) when they are removed.
1983 High Top 1.9 Petrol Early DG Engine
Top

If the OP wants he can take a close up for further comment and suggestions for remedial action
1981 RHD 2.0 Aircooled Leisuredrive project, CU engine
1990 RHD 1.9 Auto Sleeper with DF/DG engine
Top

Indeed I shall - very interesting spot! Do hope that it proves to be something rather than a trick of the camera.
Back to the shed on Monday so I shall investigate and photograph further.

Does anyone have any tips for cleaning the outside of the Heads?
Mine appear to have a covering of what looks like limescale - I guess this is some type of salt produced by a chemical reaction that I should probably know more of the science behind (studied Chemistry some moons ago). Anyway, it’s not particularly easy to remove and my mild OCD has started playing up as I now envisage refitting a spotless, gleaming engine that is 100% reliable and has gained at least 30bhp.......
I have attacked some of it with the filament wheel showed above by am slightly concerned that this is a little harsh for the Aluminium......can’t quite work out if it’s leaving marks in the residue or in the case itself

Case comes up nicely with a brass brush and Brillo pads (the coarser type without the built in soap were better).
RIP - George - 1.9DG '85 AutoSleeper Trident - rusted away


Worth adding that it comes back too, unless you treat the case in some way.

So consider how shiny you want to make it. I painted mine to get round this, but there is probably little point making it too nice.
RIP - George - 1.9DG '85 AutoSleeper Trident - rusted away