I am assuming the worst when my van goes in to the workshop next month, to get the engine out and on the bench for a post-mortem following gasket failure. in my search for a replacement engine for my 1.9Dg, I have come across a reconditioned DF engine, but I’m concerned it’s going to be underpowered. Is there anything I can strip off the dead DG to bring the performance back to around 80bhp?
Howard
1984 1.9DG Panel Van
Top

No don't do it, DG is OK on the flat and painful on hills with a heavy camper.
DF will just be painfull.
keep looking.
1988 DG WBX LPG Tin Top
1989 DJ digijet WBX Holdsworth Villa 3 Pop Top
itchylinks
Top

My DF is fine on the flat a steady 60-65 no problem, she’s even managed to keep up 70 on the motorways, but any hill is very slow going, even down to 2nd in some cases but mostly 3rd and 30MPH.... all speeds are indicated and not actual

Many years ago, Elite, (that famed bunch of cowboys from Basildon) put in an DF in exchange for my original DG. They said it had the same specs as a DG, I knew otherwise & insisted they removed it & replace it with a DG. I recall the DF being sloppy & underpowered & I was grateful for it to be gone. Whilst the DF was carted off for a sloppy afterlife for some unsuspecting owner, Elite, for some inexplicable reason remain at large.
1983 LHD Westfalia poptop 1.9 DG petrol.
Top

Find out what sort of DF the DF engine is.

I have a DF engine in my camper which was a concern before I bought it. Actually, it's a DF case, after some investigation I discovered it has DG heads (bigger valves), which means that the only remaining material difference is the camshaft which is more conservative than the DG one (which isn't saying a lot). My thread is here http://forum.club8090.co.uk/viewtopic.php?f=37&t=163534

When you look at the stated output parameters the DG engine is 78hp while the DF is only 60. That appears to be a lot, but when you look at the peak torque fiqures the DF has 140Nm @ 2200 rpm while the DG has 141Nm @ 2800 rpm . Put simply, torque is what gives you acceleration, power is what determines your top speed.

My van also has a Webber carb rather than the Pierburg, so in the course of my research into what exactly is in my van I built a model to do some simulations to evaluate what sort of power my particular configuration has. To do this I had to evaluate aerodynamic drag, mass of the camper, transmission losses and assume gearing is "near ideal" along with a host of other assumptions. All that said my calcs did come up with values similar to manufacturers quoted data for the T25 and some other cars I have.

The conclusion I came to was that my setup has around 69 HP, halfway between the ex factory output of the stock DF and DG engines. People say the Weber carb is no good but it seems fine in my van. I suspect I have a DF camshaft, but have not researched that yet. I could have a DG cam and just be down on power.The difference in top speed between mine and a new DG is 3 mph. A standard DF will be a further 4mph slower.

Short answer, don't worry about the engine being a DF case, ask if they know what camshaft is fitted, get your DG heads swapped over if necessary and enjoy using the van.
1981 RHD 2.0 Aircooled Leisuredrive project, CU engine
1990 RHD 1.9 Auto Sleeper with DF/DG engine
Top

937carrera wrote: torque is what gives you acceleration, power is what determines your top speed.

I can see both sides of the argument here. Tootling around town with a DF may be fine but I'd say it won't be long before you start wondering what it would be like if you had found a DG, MV, DJ etc.

Mine was originally a DG but has had a VW recon/recycled engine at some point so the engine number no longer gives much away but it all looks to be DG apart from being fitted with a 34DAT weber. Pulls well and does the job.

However.... if I was faced with a terminal engine I have to admit I'd be searching high and low for a 2.1 and more than likely run it on a carb. If you are having to replace engine you may as well do it the once and get the most from it unless you fancy going down one of the conversion routes.
1990 1.9DG 34DAT carb Leisuredrive hightop
Top

In my experience, probably about the same.

I've just checked the gearbox ratios for the 5 speed box, 40 mph is equivalent to 2450 rpm, which is just past peak torque for the DF, and just before peak torque for the DG. Power, being a mathematical derivation of torque, at that engine speed will therefore probably be pretty similar. I've seen a power & torque curves for the DG, but not the DF so can't do a direct comparison.

As well as the T25 I have cars and a 10 te truck. When loaded the trucks performance up hills really takes a hit. I can be down to 40 mph on a long motorway hill when the newer unladen 410HP+ arctics can still maintain a restricted 56 mph.Reading the road and planning which lane to be in are key.

Dont get me wrong, I'm not recommending a DF over a DG, given the choice I would select a DG or better a DJ, but not everyone has that choice, I just wanted to give the OP my perspective with the "hybrid" engine.
1981 RHD 2.0 Aircooled Leisuredrive project, CU engine
1990 RHD 1.9 Auto Sleeper with DF/DG engine
Top

ash1293 wrote: Mine was originally a DG but has had a VW recon/recycled engine at some point so the engine number no longer gives much away but it all looks to be DG apart from being fitted with a 34DAT weber. Pulls well and does the job.


Interesting, you probably have the same setup as me, and a similar conclusion.
1981 RHD 2.0 Aircooled Leisuredrive project, CU engine
1990 RHD 1.9 Auto Sleeper with DF/DG engine
Top

From driving my van I thought that she would start to run out of breath at 4-4500 rpm, just by ear. Now I have a tacho fitted I can test this out, once she's taxed.

Beware the scale difference on the torque curve, no doubt done to create a particular impression.

The site has a fantastic selection of brochure images 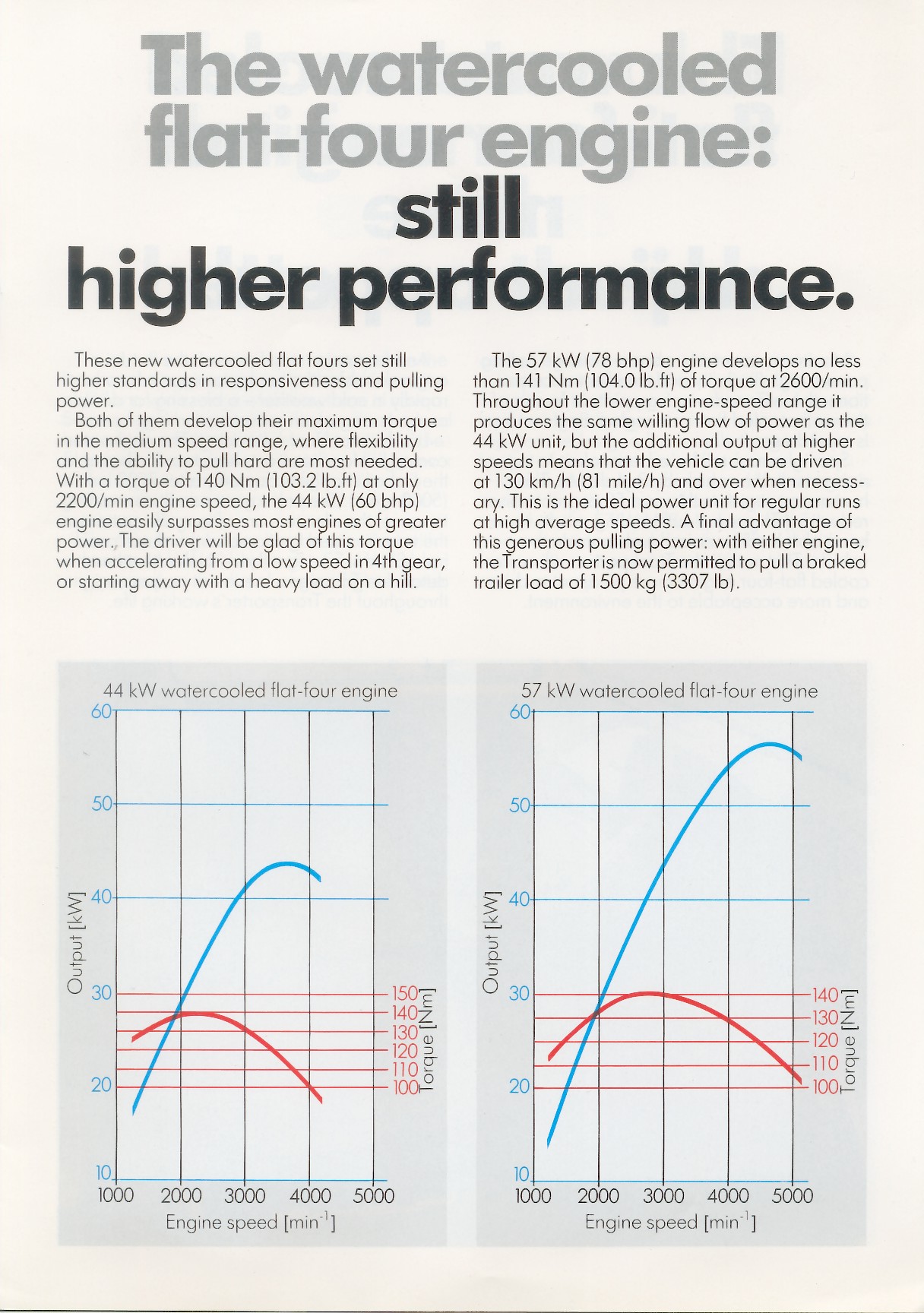 Very informative responses chaps. I am pretty convinced now that the DF will be a disappointment by comparison... My plan then has to be this:

get a full prognosis on the DG. If the heads come off without any broken headbolts and the engine is fit apart from the gaskets i'll replace the gaskets.

If the DG engine is terminal but heads are good, and there are no other engines turn up, i'll look to fit them to the DF, along with the Pierburg.
Howard
1984 1.9DG Panel Van
Top

found myself doing 80 yesterday my mistake, didn't realise until I overtook a T6 and thought why is he going so slow
2.1 DJ

From driving my van I thought that she would start to run out of breath at 4-4500 rpm, just by ear. Now I have a tacho fitted I can test this out, once she's taxed.

Beware the scale difference on the torque curve, no doubt done to create a particular impression.

The site has a fantastic selection of brochure images

That's very interesting stuff David, being a DF owner myself (I believe it to be in original configuration with Solex carb etc.), I will say it is ok around town and does happily sit around 65mph on the motorway once up to speed, however, otherwise is a little leisurely. Just yesterday I had a fairly heavy load in there as I'm about to move house, and I would say performance was not much altered and felt quite torquey.
1985 Sheldon High Top 1.9DF
Top

FWIW, these are the results from my top speed model - for an unladen panel van, campers are heavier /slower, though aerodynamic drag is the biggest influence.