Firstly, the power supply for stock headlights is via the existing 6mm power cable at fusebox which is barely adequate. Voltage losses can result in as little as 10 volts at the headlights so some remedial work in terms of increasing cable capacity is essential before making any changes. Fitting higher wattage bulbs will not work either as all you'll be doing is putting greater strain on the harness which could result in a fire. See: http://wiki.club8090.co.uk/index.php/VW_Electrics_battery_to_dash

Noting the above, round headlights can easily be upgraded to modern computer-designed reflector based headlights which vastly improve the focus and brightness of headlights and for much less than two new Hella headlight units.

There are a couple of ways to fit them, although Wychall's solution further down the page is the best solution to date as you'll then have a light fitting that will accept many different types of 7" headlights including angel-ete and DRL units as well as some of the more costly LED headlights.

If you want to save a few quid and are up for some simple tinkering, this might be for you. Currently stocked by Euro Car Parts for under £10, and described as 'lucas' headlights, these basic curved headlights can be made to fit existing headlight holders fairly easily. Its a good solution on a budget if your existing reflectors are dull or you have a cracked lens.

More to the point, in the process of making them fit, you'll also increase the choice of 7" light units now available to you as you'll be able to fit both stock and numerous aftermarket round units (including ones with LEDs etc) with ease - and without damaging the headlight frames in any way.

My eternal thanks to Oldie but goodie for guiding me on the fitment, which requires only very minor modifications. In fact the Lucas-type drop straight in to the headlight frames, the only thing thats missing being a way to fix them in firmly - but thats easily solved!

Oldie tells me that you can also get Lucas securing rings (at a price) but the clips I suggest here will do the job fine. 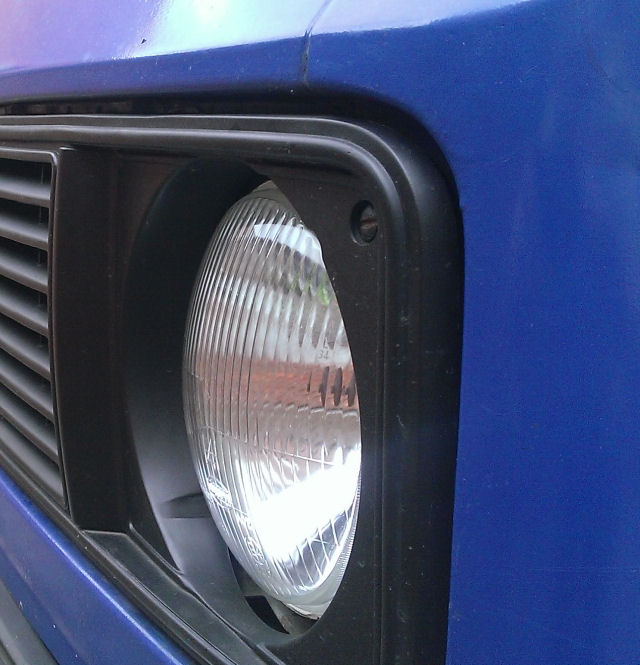 Next undo the three screws that hold the old light unit in the frame - the small philips ones. Use a little plusgas on them and tighten the screw slightly before undoing - this will help avoid rounding out the screws. Ignore plastic fittings - these are for light adjustment only.

With old unit out, the three lugs on back of the new light unit should drop nicely into the three recesses in existing light frame (see photo below). Do NOT cut them off. You need them to help locate the headlight. In practice I found on one, I had to bend them very slightly (careful) towards the outer edge so that they dropped in really snugly into these recesses without the light moving side to side. Spend a few minutes getting this right and don't bend lugs out of shape too much. With headlight pressed firmly into all three recesses with your fingers, it shouldn't move side to side or up and down. It won't stay in there ofcourse, not without clips, but it should sit in there.

Photo below shows lug and recess I'm talking about. At bottom left you can see screwhole which held old unit which will now be used for the clips you need to fit: 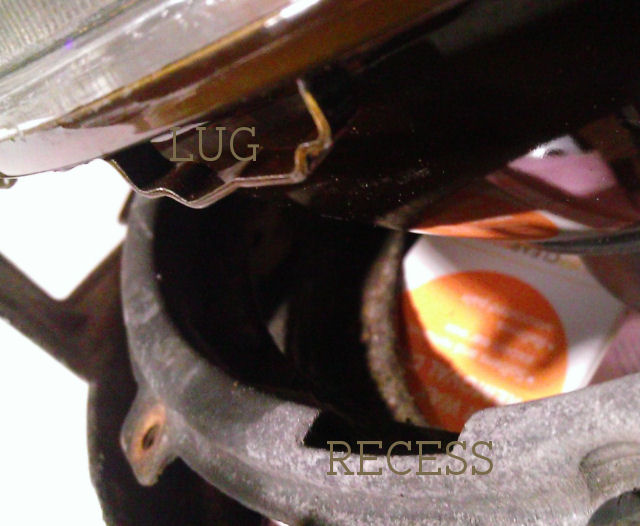 Once they're right, all you need is three metal clips similar to those used to fasten brake or gas pipe to bodywork, bent slightly so it grips outer metal edge of front lens. Below are actually what I used. Not sure what they are called but not too difficult to fashion. You may find something in your junk box that will do the same job

If you can't get hold of suitable clips, stiff coathanger wire can be used, bent round on itself to take the screw, with the tails bent and cut to length so they grab outer rim of headlight. You can swap existing screws for similarly sized but longer self-tapping screws if it makes fitting easier. All the clips do is stop headlight falling out. They don't need g-force clamping power, they just need to be secure. 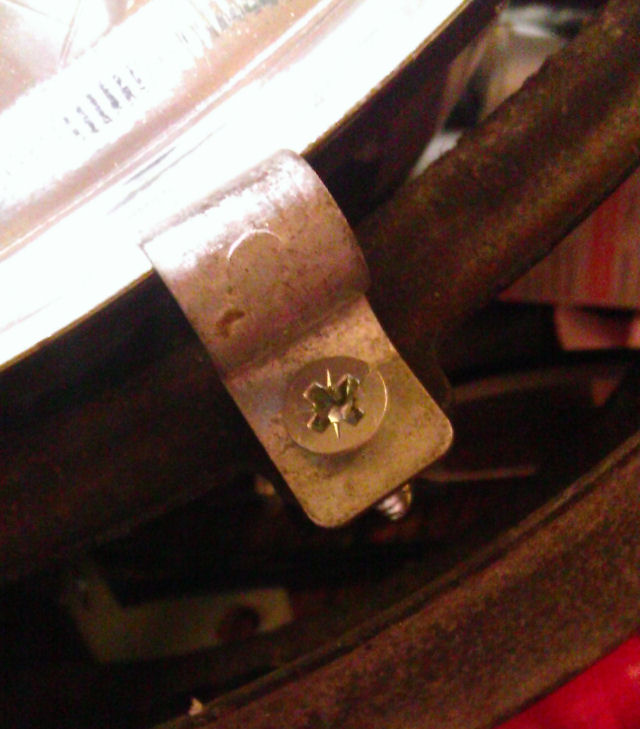 Bear in mind they ARE curved headlights rather than flat like stock ones but you don't really notice to be honest. The light pattern is fairly good - for the price.

I have concluded that these units are almost certainly the same as those fitted to the Ambassador car, common on India's streets. Certainly thats where they're made. They are Autopal HL-101 units and they make fancier versions with fluted reflectors but these are bog standard reflectors. For under a tenner, they're a bargain but remember you'll need clips to hold them in place. The big plus perhaps is once you've made up the clips, there are a whole host of 7" lights you can now fit including ones with built-in LEDs, fluted reflectors and goodness knows what else. Checkout ebay and other places and you'll see what I mean. Good as Hella units are, there are some very neat units out there now.

Alternatively you could fit these: 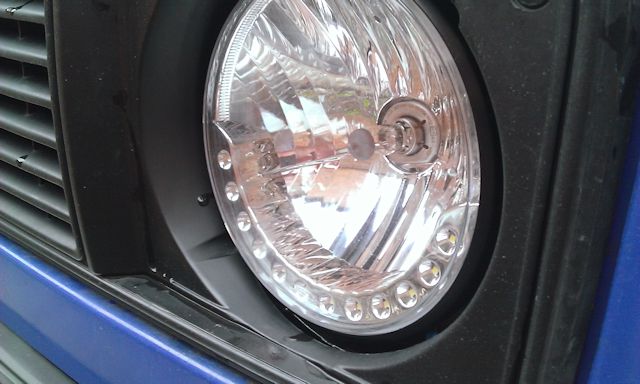 You can buy them through powerfuluk on ebay for around £40 the pair. Excellent bright and focused beam which puts Hella units to shame. They're lightweight and can easily be fitted using three cable ties and the adjustment screws unaffected.

For reference, I marked a wall with chalk prior to removing headlights and the new lights lined up perfectly with those marks but you may wish to mark a wall like this in case you do have to readjust yours.

Wychall recently came up with a more permanent fitting for lucas lights which uses the lucas adjusters instead:

Bought a pair of Crystals and set out to fit them but didn't want to be using cable ties or spurious clips to mount them. So I bought a pair of plastic Lucas headlight buckets. 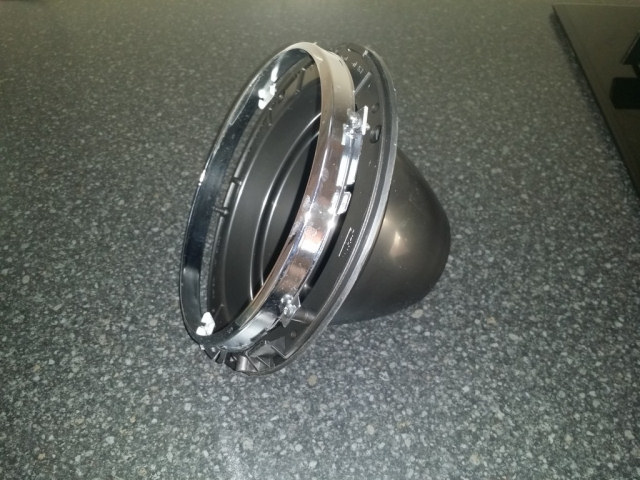 The headlamp fitted easily into the chrome bezel, but the bowl was too deep to fit into the VW bracket. So I cut the bowl off, just leaving the front flange. 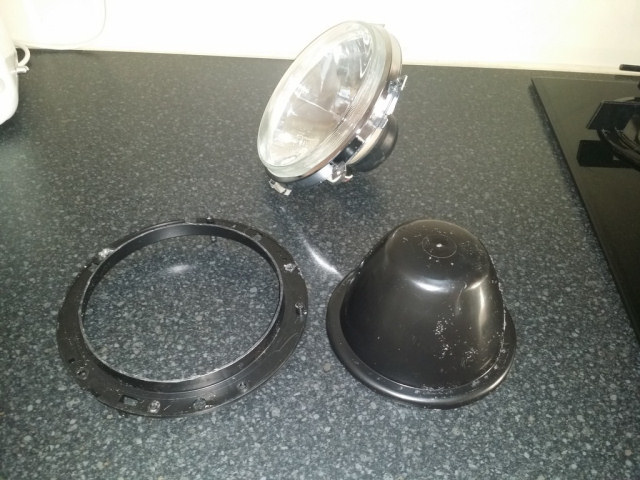 The flange fitted into the VW bracket, just needing a couple of holes drilled to take the adjusters and for the fixing screws...... 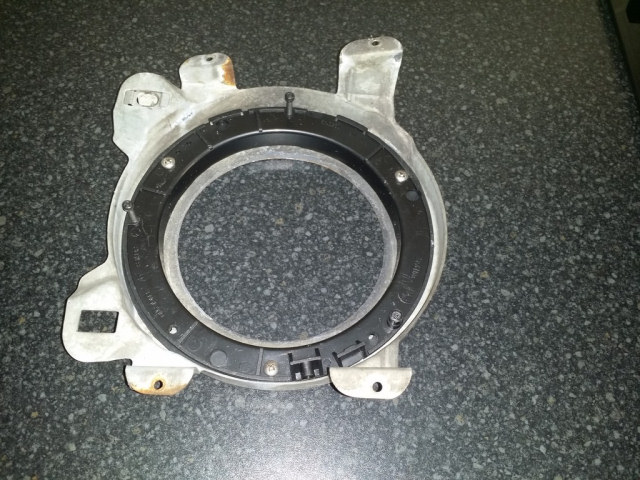 The new lamp then fitted in and was easily within the range of the adjusters. 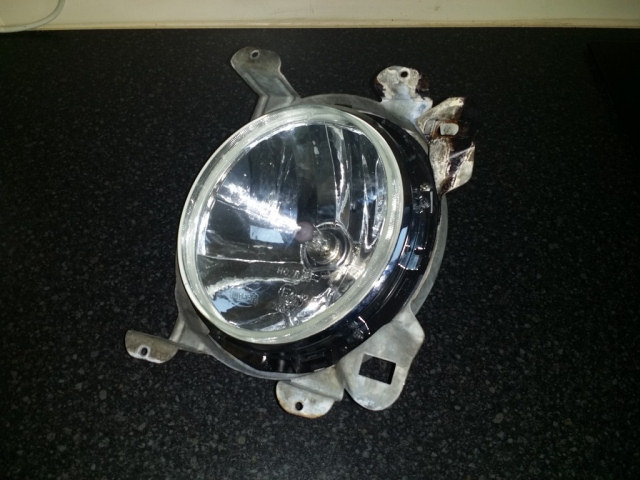 Fitted back on, set to match the marks on the wall from the old lights and the jobs a good one. I think they match the inner lights sufficiently to leave as is. 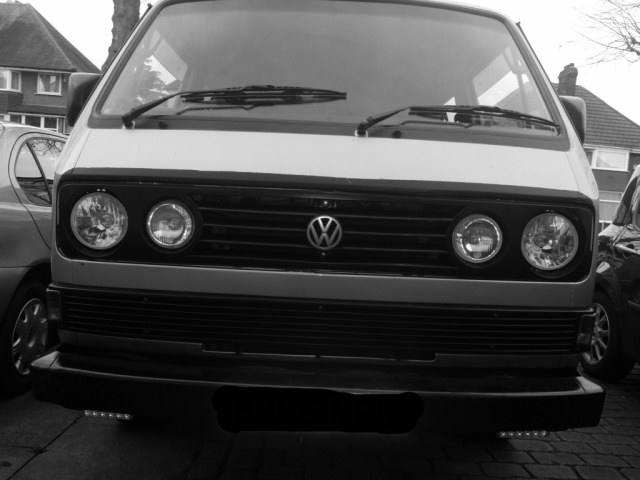