Edited by CovKid: This page subject to revisions and updates.

Several things can make for bad running but a faulty coil can cause erratic running, backfiring, spitting, poor MPG, stalling and jerking - if it runs at all. It can also misbehave when hot or the engine stop every time you pull to a halt. You need to check everything else including fuel system to pinpoint the problem rather than just replacing parts in the hope you'll stumble across the culprit.

Its worth noting that poor maintenance (eg spark plugs with wider gaps) forces the ignition coil to operate at a much higher output, working harder and effectively shortening its life so checking plug gaps from time to time saves money and aggravation in the long or even short term. Other causes are leakage around plug caps or inside distributor cap but I won't dwell (excuse the pun) on all that here.

The simpler DIN connections (see photo of distributor cap below) are like those found on classic Beetles and Type 2s and have no centre pins, whereas 86-on T25s tend to have PIN connectors with leads that have a hole in the end which click into pins in the distributor cap and coil. Know this from the outset - you can soon check by removing a lead. Also, if you change from an early DIN connection coil to a later PIN connection coil, you'll need to change both leads and cap to PIN-type too! 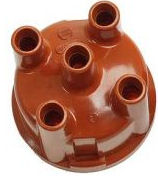 The grey sticker version (191 905 115 A), also a PIN connector type, is basically a 'punchier' version of the green one although that does not mean you'll get more power from your engine - get that idea out of your head. It will just run for a longer period of time without attention. It has a higher secondary resistance and is capable of higher HT voltage. It is designed for long life plugs and extended servicing, and according to BigHerb can fire a worn plug with larger gaps although I imagine it demands a little more from your battery.

The HT leads also need to be in good order and/or good quality for this type of coil otherwise the higher voltage will find a much easier route to earth than through the spark plug - ie the potential for arcing increases. Brickwerks list one made by Beru and one made by Bosch.

In most cases, the green label variety is the correct one if you have a late (86-90) engine but a grey sticker one might be fitted to your vehicle and could also be retro-fitted if the above points are noted. A coil for extended service life has some advantages, particularly if you're averse to maintenance but the whole ignition system, plugs leads, rotor and cap must be in good order if you're to avoid arcing. It stands to reason that the more ooomph supplied by the coil, the harder it is to contain and direct the voltage to where its needed - remember Dr Frankenstein?

Brickwerks advise that you check to see what colour sticker is on yours before ordering although if its definately a PIN-connector type (post-85 usually) and theres no label, the green one is probably the one you want.