My starter was intermitant would work one day and not the next, I had replaced the ignition switch checked the spade connector on the starter was tight and the starter was recently replaced. The main positive to starter cable can be damaged internally without visible problems externally. Ringo suggests testing for this by doubling up the starter cable with a jump lead to see if it is cured, but be very careful not to earth on body work if attempting this! I got a 25mm square section 1 Meter long. The original is a shade shorter than this 95cm probably but the little bit extra gives you routing possibilities, any longer it would cost more and start rubbing against things. If you really wanted to go to town you could get som convoluted cable cover or other flexible protective cover to make absolutley sure iuts not going to rub with the diesel engine vibration and earth against meatal which could lead to a fire. I secured against the top of the battery tray where there is a hole in the metal, I twisted a cable tie so it was in a figure 8 (to stop it rubbing against the metal edge. Then over the power steering pump and secured to the bundle of wires at the back of the engine bay. Be aware that the starter will move with the engine but the engine bay does not so this thich cable may pull against the starter connection if it is too tight leading to a breakage of the solenoid. So it may be best to support the cable but dont lock it tight. I Reused the rubber boot from the original cable 10mm butt ring connector crimped on by the motor factors, it may be possible to do this with a vice, and a standard battery post terminal Cost £12.95

These would have done it. Cable is ref 196

a nice upgrade for diesel T3 owners over the rather crap original ones is to grab a set from a Mk3 Golf. Some Golf petrols have the starter behind the engine so the cable is plenty long enough when swapped onto a T3. The nice thing is the terminals are much more robust and have 2 M6 studs and 2 M6 tappings for additional connections: 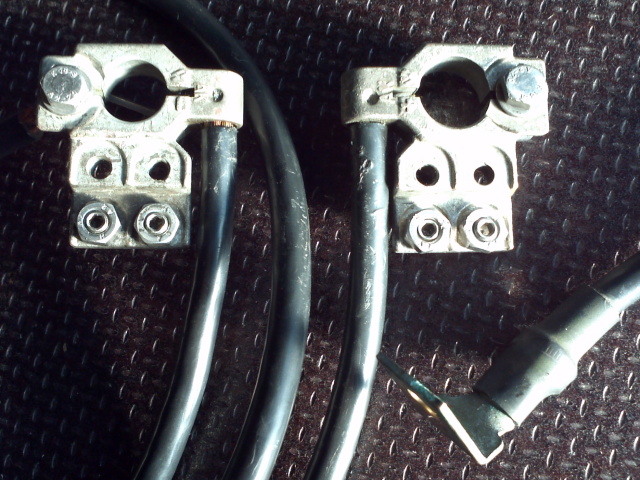