VW T25(UK)/T3 (Euro) utilise needle rollers beearings as their input shafts project a considerable distance from the first(closest) of the their gearbox support bearings.

A characteristic of a worn spigot shaft bearing is a rattling from that bellhousing area when the engine is idling in neutral and the clutch engaged... depressing the clucth pedal removes drive to the input shaft and rattling/knocking may cease, a fairly accepted diagnosis.

Also note that on WBX's there is a felt washer in a recess in the flywheel that might best be changed too, and that you will need the correct needle brg for your engine/gearbox combination

NB. When replacing your T25 engine with another Alt Eng. such as a VW in-line 4 (Golf 1800 etc) it is wise to check whether it actually has a spigot-shaft bearing in the crankshaft recess.

Many other engines do not (or have a plain bush) as their 1st motion shaft /input shaft are short and fully cantilevered from the gearbox bearings.
This requires one to be fitted to suit the T25 g.box spigot.

The result of overlooking this can do a lot of damage to the input side of the gearbox, such as the oil seal, bearing and oil thrower, and annoys the bejesus out of Aidan to boot :)

How to replace a spigot shaft bearing - Aidan

Aidan: So faced with flywheel 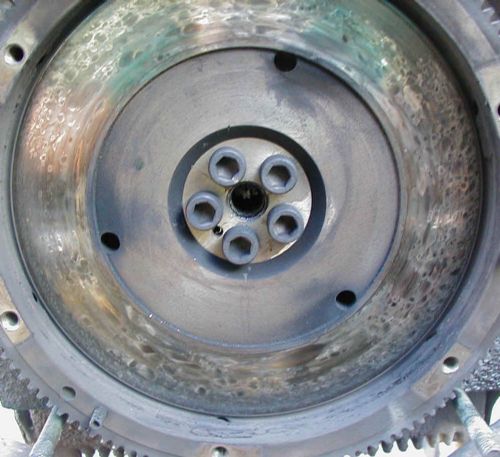 you need to undo the 5 bolts holding it on - it helps to have an impact gun, but failing that a 2 foot bar and another long bar or a flywheel locking tool to hold the flywheel whilst you undo them 10mm Hex 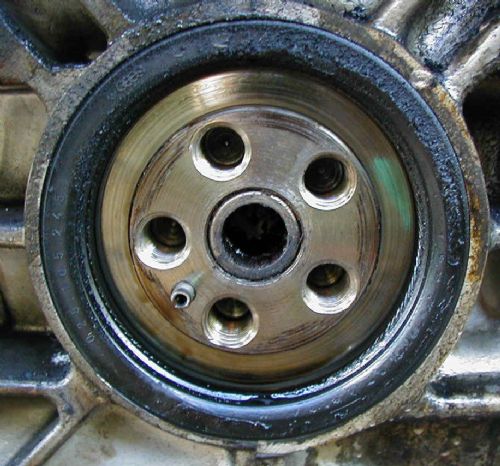 then armed with your puller or slide hammer

fit into bearing and tighten then fit slide hammer 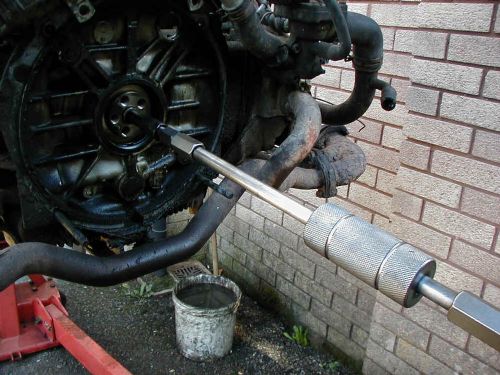 and start to pull it 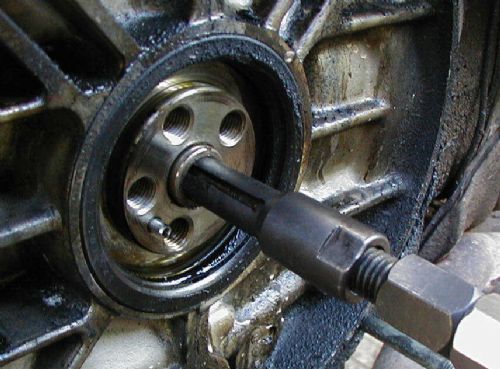 till it comes out :ok 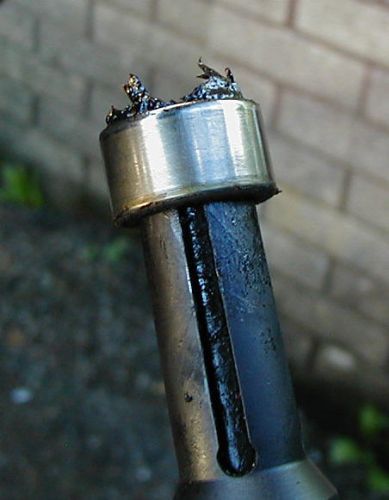 leaving an empty space in the flywheel with a stop behind 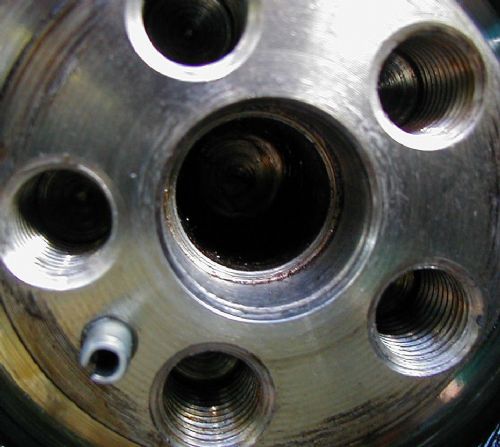 this shows the diesel spigot bearing on the left and petrol on right, the flat face with the writing on faces the gearbox the curved end faces the engine when fitted 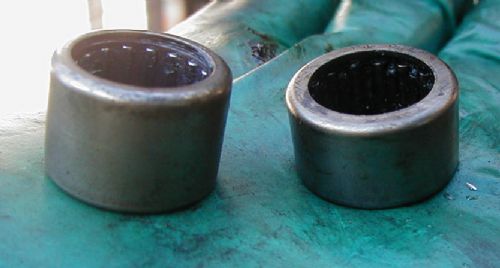 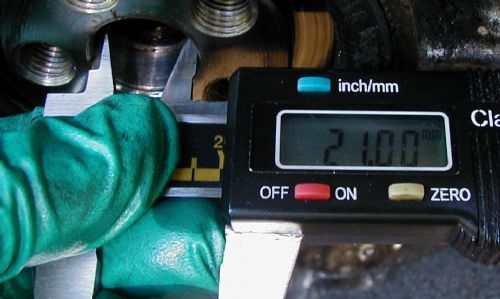 as is the bearing shell outer diameter 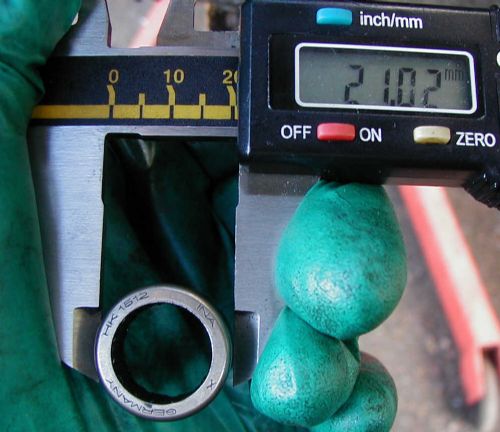 and the inner dimension is 15mm ish - to match the spigot end of the input shaft which will be just under 15mm (like 14.97mm) 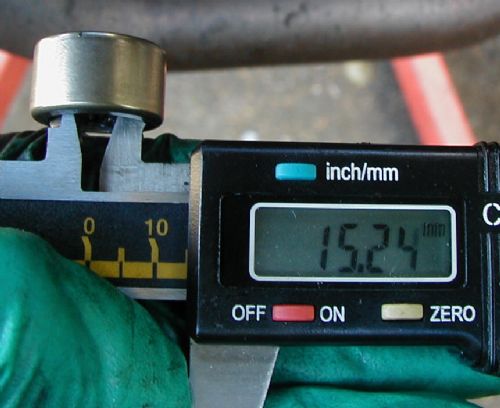 and the felt washer on the petrol engine fits in the recess on the back of the flywheel and the sealing o ring sits in the groove, just visible in the picture 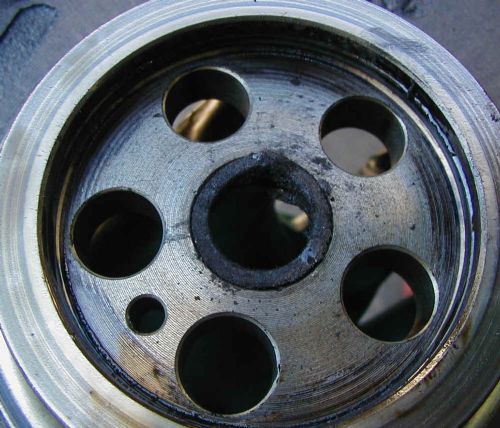 Replace the 'O' ring, the washer and the spigot bearing and reassemble - flywheel bolts need to be tight but VW tightening spec is scary tight as previously noted - 60Nm (44ftlb) plus an added 90degrees - you probably won't get them that tight so use a very little threadlock

How to replace a spigot shaft bearing - itchyfeet

OK so I did this today with the Rawlbolt method, tip courtesy of Ian Hulley, probably wasn't broken but as the box was being replaced with an Aidan Talbot rebuild and as it probably has 100K miles on it I though it was time it was done. 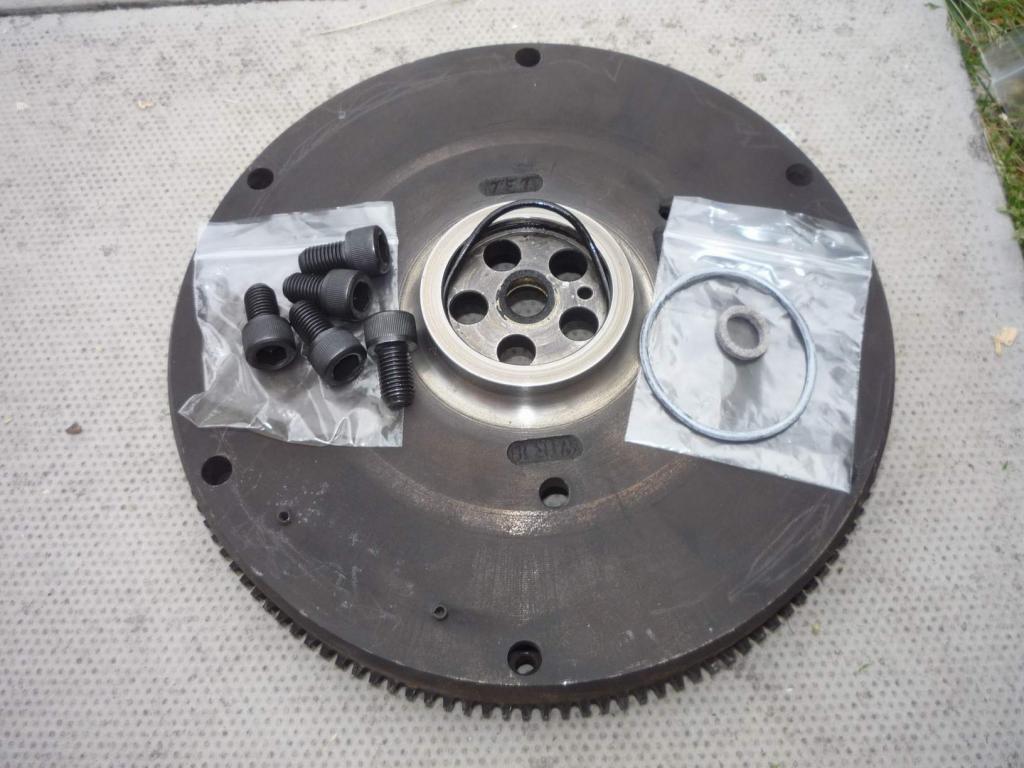 Flywheel needs removing as the bearing won't fit through the hole, for a WBX you need new bolts and an o ring ( oiled with a little fresh oil) and a felt ring. ( Parts all available from Brickwerks) I replaced the oil seal at the end of last year when the engine was out but this would be another thing I would recommend doing while the flywheel was off.

then fit an M8 Rawlbolt through the bearing, and expand it, you don't want it too far in just past the bearing, I added a nut to stop it coming out. 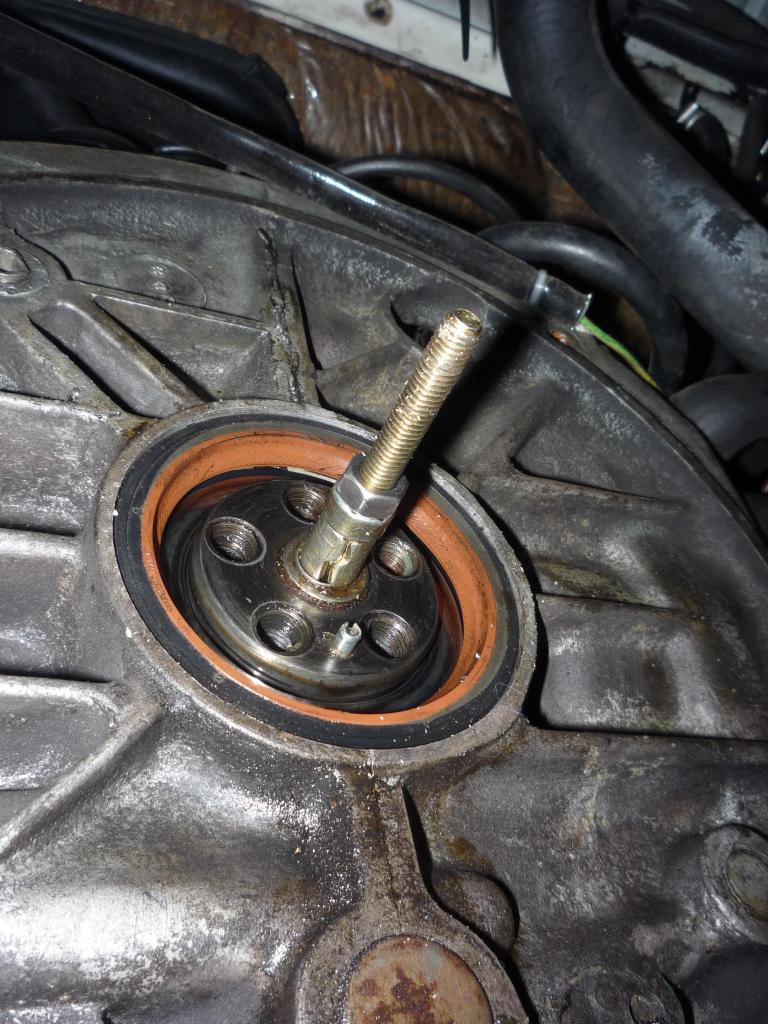 Then drill a 20mm hole in a block of wood large enough for the rawlbolt body to slide through, add a large washer and tighten. 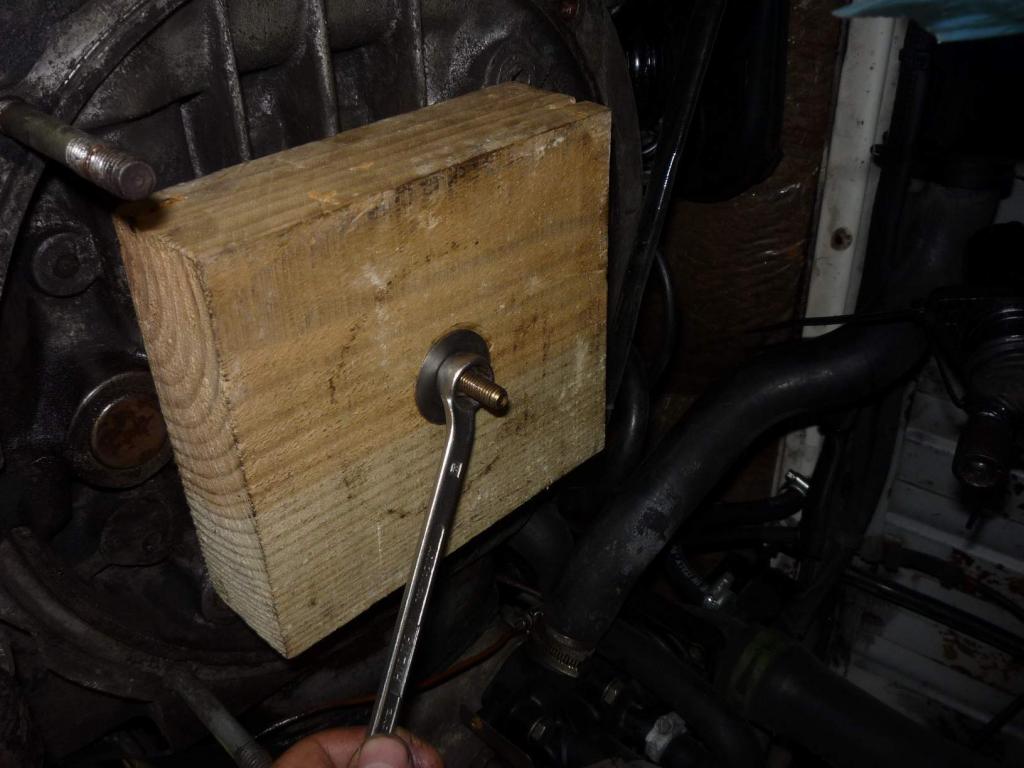 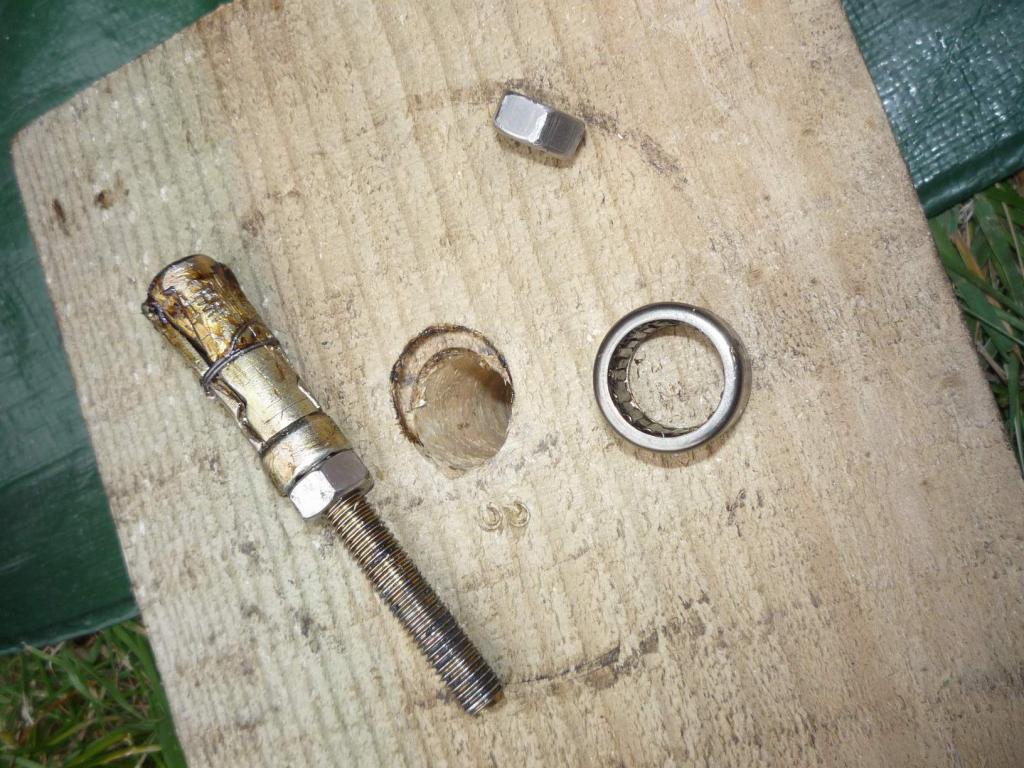 New bearing was tapped in with a wooden drift. 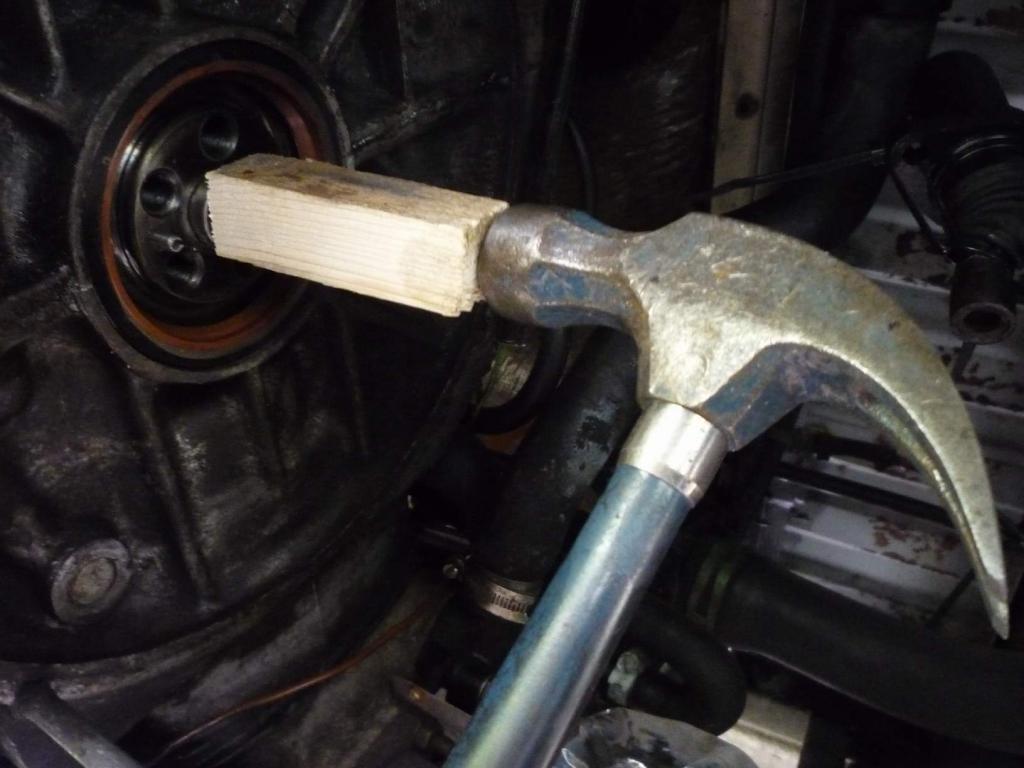 As the gearbox nearly fell on me when removing it with a trolley jack I added some eyelets under the decking (I used existing holes but worth drilling some I think) and used ratchet straps to refit the gearbox. 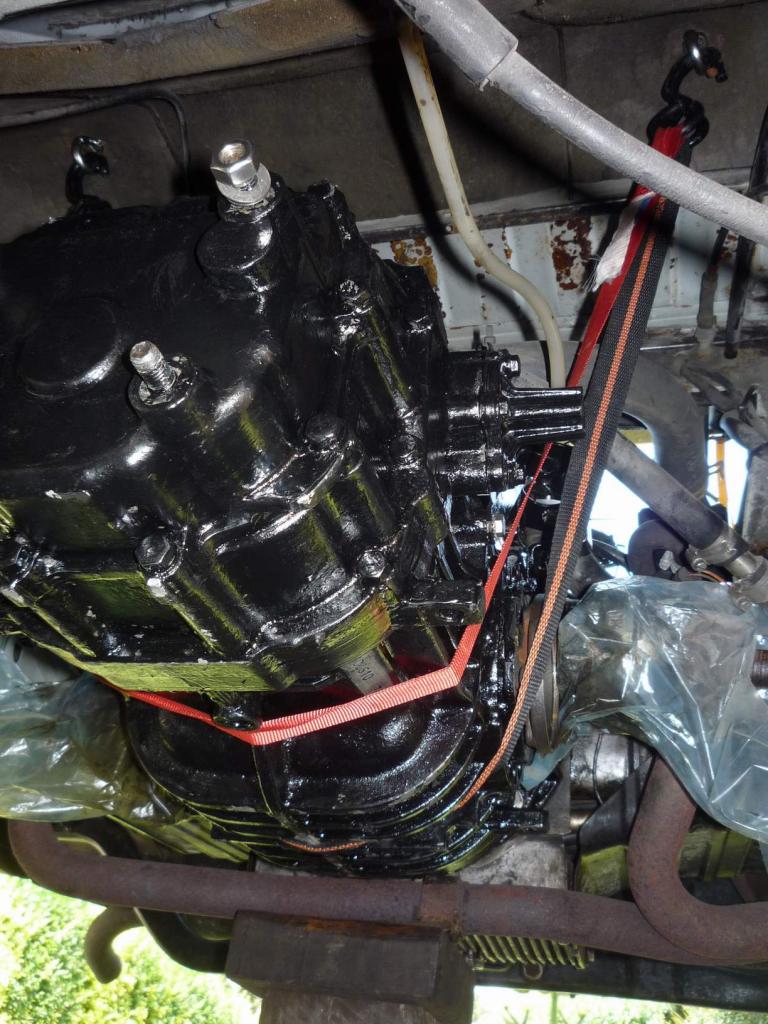 Here is a link to a forum thread on this, the 2nd of each pair of links hopefully still working once the topic has been moved to the 80-90 Tech Archive in due course (don't ask!)

From the diesel spigot-bearing topic

Yes, I'm confused now too, other than that the flywheel has to come off to do petrol spigot bearings and not for diesels @@

(The folloowing put here by ghost123uk) - This comprehensive "all you need to know about Spigot Shafts, their seals and oil throwers" is cut and pasted from a thread by Aidan Talbot

It is too common a problem, caused usually when numpties fit replacement inline 4 engine and don't fit a spigot bearing in the end of the crankshaft of the new engine, 350miles later and the clutch is slipping due to oil contamination, they go back in, maybe fit a spigot bearing and replace the seal but it does it again, often by this time the van has a new owner and another garage trying to figure out what is happening;

Either that or some sort of wierd engine is fitted, using an adapter plate and there is an alignment issue, also common with certain converters.

The oil thrower that is fitted in the bellhousing behind the oil seal is essential to reduce the oil load on the seal as the crown wheel is rotating at wheel speed and throwing the oil straight at the back of the seal, or it would be if the oil thrower wasn't there, it runs around 0.5mm clearance on the shaft and is grooved inside to resist the oil being drawn along it by the roatational forces

The oil thrower is not available from VW as a seperate part, it is fitted to the bellhousing just like the dowel pegs and any other interface bits are to make the complete bellhousing part of the gearbox case

One or two of the german suppliers were selling original type pressed steel oil throwers, Winkler maybe Notter ? I don't know if they are still available

When I ran out of bellhousings to reclaim undamaged ones out of (petrol ones usually :lol: ) to repair damaged ones (f...ing diesels mostly) I had to get the machine shop to make some (hand made by machinists on lathe - old school) for my customers' needs, fractionally oversize on the collar to fit slightly worn bellhousings, but if bellhousing is badly worn then it goes to the engineers for sleeving and replacement oil thrower as thrower must be centred otherwise it will run against the input shaft and wear and the cycle will begin again

Choices then are replacement good used bellhousing, check out if available from Germany or failing that drop me an email

When changing the seal it is much easier to do if you remove the bellhousing, for the price of a gasket you get an easier job, the chance to check the input shaft and oil thrower properly and a look at the crown and pinion and a view of the drainplug magnet; an oil change is optional (Ralph), golf tee plug in the breather hole 1oclock on the front case and you can stand it on it's end with the mount removed but unless you know the service history of the box I'd always recommend changing the oil, and then doing it regularly, 2-3 years 20k miles max, more often if used hard, hot, towing, off road etc..

I'd also recommend that you fit a new spigot bearing when doing an engine change or a clutch swap it's the best £8 you can spend, if you have to pull the box and pay a garage to do it figure on minimum £100 labour plus whatever it costs to fix whatever is damaged (shaft, oil thrower, clutch ?) in future; the poor little needle bearing goes from stationary to running at engine speed everytime you press the clutch with the engine running with feedback load from the transmission and yet most people are happy to leave well alone even though it maybe 10 or more years in there, many diesels have the wrong one fitted , the petrol one will fit the diesel engine but doesn't have a built in seal to protect it from the clutch dust like the correct one does - in the petrol engine there is a felt seal in the back of the flywheel to protect the seal, these often get omitted or damaged if/ when flywheels changed, eg when fitting a rebuilt engine that comes with no flywheel (petrol flywheel is pretty much unobtanium new these days in UK)

AND diesel engine boys (and inline 4 engines fitted using the diesel mounts) remember to lift the back of the engine up (ratchet strap and block of wood across hatch) before trying to remove gearbox so it will easily clear the chassis and uncouple without you loading up the spigot end of the input shaft and damaging it by pressing the b..stard hard bearaing needles into the very very thin b...stard hardened surface of the shaft, this is what probably causes the majority of damaged diesel input shafts and spigot bearing failures that are all too common - having the engine at correct angle makes installation much easier too.