Recomended brands Unfortunately VW no longer sell their Blue Quantum oil which was ideal but any branded MINERAL 15W40 oil (SF grade or later) will be absolutely fine for watercooled petrol engines. However, a definitive explanation of oil types and the best one for each type of VW engine including aircooled and diesel can be found here: All_engine_faults/repairs/maintenance_Oils_recommended

Important to note here that the 15w40 viscosity is important as thinner oils (10W40 for instance) are generally too thin and may result in noisy hydraulic tappets due to 'hydraulic tappet drain'(typically you will hear a very load 'clattering' noise on start up that just won't go away until the vehicle/engine has been driven and up to temperature...could take as long as 20 minutes hard driving to disappear.

Quantity Petrol engines take 4.5 Litres to get half way up the dipstick

Oil is cheaper than replacing the engine!

Oil changes at 3000 miles are the nicest thing you can do for your engine. It is something that the most novice mechanic can do with some basic tools.

Oil, Quantum 15-40 from GSF or other supplier. Both petrol engines take 4.5 Litres including the filter, if you aren't replacing the filter you only need 4L.

Oil filter, some change this every other change so every 6000 miles use a Mann filter they are the same for 2.1 and 1.9 Litre petrol engines

Always change the sump bung copper washer, it is designed to crush and seal but only the one time.

A receptacle for the old oil to drain into. It should hold at least 5 Litres, suitable lie down oil catchers are available at Halfords etc

Remove sump plug with something to catch the oil you might want to put some newspaper down underneath this to catch the drips. 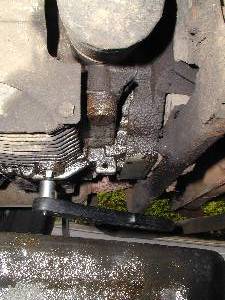 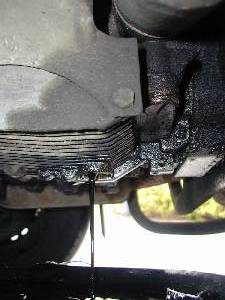 It is always best to change the oil whilst warm (not red hot obviously)..it drains quicker and more thoroughly.

Replace sump plug with new copper seal. Tighten the sump plug up but DO NOT OVER TIGHTEN (25Nm 18 Ftlbs according to bentley). You can tighten the plug by holding the scocket around the centre to prevent you having to much power on it, you just need enough to nip it up, you can always tighten it if it drips but if you strip the thread you'll be sorry.

Fill new filter to with in an inch of the top, It takes a while for the oil to fill so be patient and do a bit at a time. Make sure seal is 'wet' with oil try not to get oil on the sides as this will make tightening it more difficult. 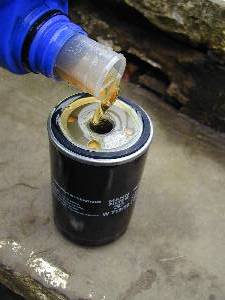 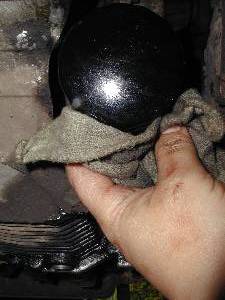 Fit the filter, you have to lean it over 45 degs, some oil may come out if you over filled it. tighten it by hand using a rag

Fill the sump through the main fill point in the engine hatch, note it telescopes out to aid filling, even so you may want to do it with a jug and a funnel. when you start the engine let it run for a few minutes before you drive to allow the oil to flow through the engine.

Any major spillages - you can put sand down (or proper oil-spill grit) and allow it to soak up then sweep it up and dispose of as solid waste. Dispose of your spent oil an a appoved oil recycling point, there is usually one at you local tip. DO NOT PUT OIL DOWN THE DRAIN!

Many say that a single grade oil is best for aircooleds, but:-

The correct oil grades for the 2.0 litre Aircooled engine are either of the following:-

I have used Halfords Classic 20W50 mineral oil without any problems.

A quick guide on engine oil temperature on all air cooled engines is that if the oil light flashes for any reason, it means stop at once !!!! Also check the oil level regularly too and make sure that the oil level is near maximum.

I would go for 20/50 mineral oil, not synthetic as this doesn't have such good heat transfer which is needed with aircooled engines when the oil passes through the oil cooler.

HM: I'm not convinced that last statment is entirely factual.. Synthetic oils are in fact engineered to be able to transfer heat well, and equiv. oil sump temps can be measurably lower. However, there may be other reasons why they are not an obvious upgrade for VW aircooleds.

ghost123uk A tip for (the awkward job of ) filling / topping up the engine oil.

Get one of those plastic bottles that "listerene" mouthwash comes in.

With a Stanley knife or similar, cut a hole about the size of the bottom of a coffee mug into the front, close to the bottom. Discard the cap. You now have a drip free "funnel" that sits inside the ( extendable ) oil filler pipe without you even having to hold it.

Forum user: Never change the oil without warming the engine up to temp first. On the watercooled the sump plug is steel in an alloy sump and the threads "strip" very easily!

Always use a hex socket or spanner, and never over tighten, just over finger tight is plenty, alway fit a new copper washer.

I always change the oil every 2000 miles, and the filter every 4000, maybe a little too regular, but oil is cheaper than an engine.

When refitting the filter take a finger full of new oil from the can and wipe around the oil seal on the filter, and only tighten to hand tight, or your'll suffer next oil change!

It is best to part fill the filter prior to refilling, but if not, take the king lead off (centre lead on distributor) and spin the engine to fill the filter before starting.

It takes 1 litre of oil to move the oil from the lower mark on the dip stick to the upper mark, and most 1.9's will burn off the top quarter of the oil on the dipstick within 200 miles, there is no point in topping it up above 3/4 unless you like wasting money on oil.

HM: Excessively overfilling any engine with oil is not recommended, and in some engines can cause trouble (blowing seals, or throwing a lot more than just the overfill out)

Also see disposing of oil responsibly in an oil-bank

Any major spillages - you can put sand down (or proper oil-spill grit) and allow it to soak up then sweep it up and dispose of as solid waste. Dispose of your spent oil an a approved oil recycling point, there is usually one at you local tip. 'DO NOT PUT OIL DOWN THE DRAIN!

Optional items to have to hand - Disposable gloves, goggles, newspaper and sand for spillages.

Quantum is the brand name for VW approved oils. we have left this picture up for reference but we understand that both Quantum Blue and Red are no longer available. Look for branded MINERAL 15W40 oils for petrol engines. Diesel specific 15W40 or 10W40 for Diesel engines NOT a normal petrol engine oil even if the label says it can be used in both. 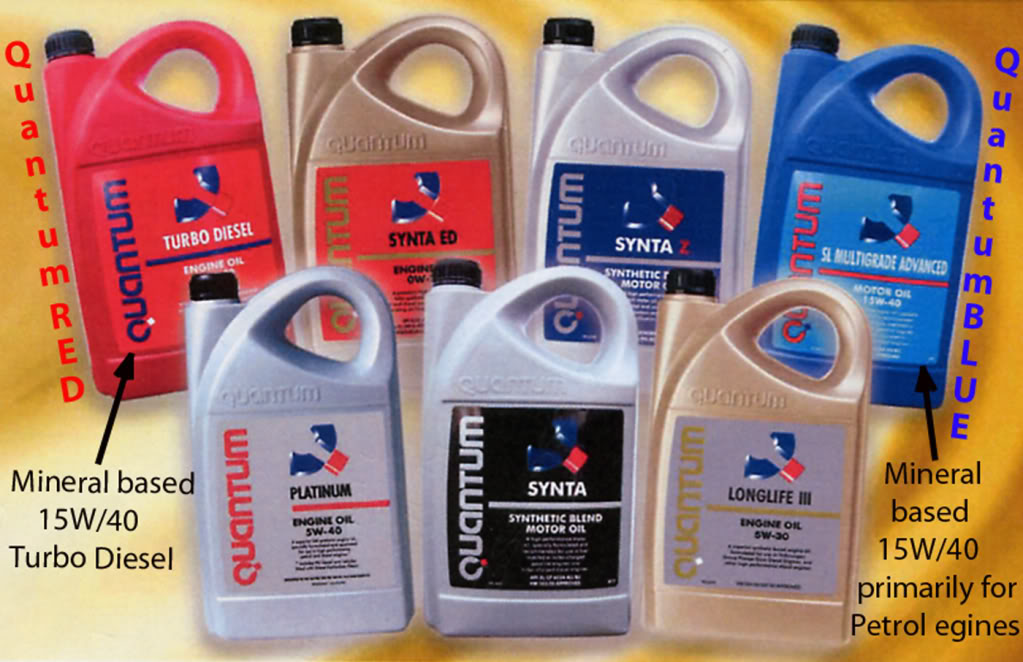 Generally, synthetic oils retain their viscosity (far less evaporation ) and in fact all their properties, with time, far better than petroleum/mineral base stock oils. They are also 'more pure' at a molecular level and used in lower viscosities, giving better flow, particularly in engines with tighter tolerances e.g. small high speed engines.

(from an Amsoil advert)

It is also important to note that, contrary to what many take for granted, higher viscosity in and of itself does not translate into better engine protection. Extensive testing has shown the opposite to be in fact true. As long as a lower-viscosity oil is formulated to resist evaporation and provide high film strength, this lighter oil will actually deliver more complete protection to the engine parts, since its more rapid circulation delivers both better lubrication per se, and far better cooling characteristics... a critical advantage, given that oil flow furnishes up to 30% of an engines cooling requirements. Prior to the introduction of synthetics the problem of evaporation (and the resultant thickening of the remaining oil) was addressed primarily by increasing viscosity. In short, don't be concerned with the relatively lower viscosity ratings of some synthetics. Syn lubes are a whole new ball game.

The remarkable ability of synthetic oils to reduce internal operating temperatures is far too important to ignore, since high operating temperatures contribute directly to premature failure of mechanical components and gaskets and seals. Coolant, (i.e. water/antifreeze), cools only the upper regions of an engine. The task of cooling the crankshaft, main and connecting rod bearings, the timing gear and chain, the camshaft and its bearings must be borne entirely by the oil. There are three identifiable reasons why synthetics do a better job of cooling an engine: (1) Because of both the oil's lubricity, (slipperiness), and its stable viscosity, less friction - and thus less heat - is generated in the first place; (2) The molecular structure of the oil itself is designed to more efficiently transfer heat, even compared against the thermal conductivity properties, (ability to absorb and dissipate heat), of an identical viscosity petroleum oil; and, (3) As mentioned in the preceeding paragraph, the more rapid oil flow of these lower-viscosity synthetics contributes significantly to the efficient transfer and dissipation of heat. Because of all these factors, oil temperature decreases of from 20 deg. F to 50 deg. F are quite common with the use of synthetic oil. One might even say that the heat-reduction properties of synthetics are synergistic...by helping to reduce its own temperature, the synthetic oil is simultaneously enhancing the lubricant's overall performance characteristics."