Should be no more than 130 degs C (oil temp!) - usually much less - around the 100 mark. If you do a search for this type of info on other aircooled forums you will find that people reckon gauges are not always reliable - even new they may not be calibrated correctly. I would check yours, either against a known good thermometer or even just boiling water. Another issue is where you put the sender - you may have got a dipstick one which I believe are ok, if a touch fragile. Other locations include tapped into the round "taco" cover-plate in the sump, near the filler pipe - the plate held in by 2x10mm bolts (you have to drop the oil to fit it and it's a bit vulnerable at a low point on the engine/vehicle. It's also in the breeze so may not be as accurate unless you fit a wind protector, which can double as a physical guard. The other factor with this location is that it is in a bit of a dead end oil flow wise so will not react as quickly as other locations. Another supposedly good location is tapped into an oilway such as the oil filter mount - a bit tricky to do with the engine in the vehicle. I've just done this but I am in the middle of an engine rebuild/swap so it's out on the floor and easy - I'll take a picture later and post it. What kind of sender have you got? Was going to but the dip stick sender you mentioned from Just campers, but they told me, they had just found out they where to short.

Stateside tuning sold me a VDO sender and a adaptor screw to be able to fit it into the oil relieve valve screw!!!

....there are 2 oil pressure relief valves on these engines. The main one is accessible from beneath, a big (30?mm diam) sort of screw-head - again it is not really in a great spot for oil flow - the oil flows above the spring-loaded piston but not really below it, where the sender will be. But it is convenient to fit and will give you some indication of temp.

Cheers for this Keith, I hoping that having the temp gauge in is better than nothing at all, just a bit of peace of mind to know im not cooking the engine.

Yeah - likewise - some say it's just another thing to be paranoid about, others say they pace their driving on the oil temp, esp in the summer in hot climes. I certainly don't want to have a valve seat let go and stuff a cylinder and head. A cylinder head temp gauge under spark plug 3 (the least cooled) is another way - more money tho. Where are you mounting your gauge? I've got a pod on top of the instrument binnacle - pic later when I get home.

I've been clearing out my garage/workshop and am about to chuck some stuff away, including a couple of cylinder heads. I thought people might be interested to see the possible results of overheating...

The first couple of pics are of the head that I replaced just after I bought the camper nearly 8 years ago - I got it very cheaply cos the engine sounded like a machine gun (I did not drive it home!). When I got it apart the reasons were obvious: 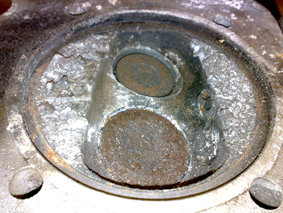 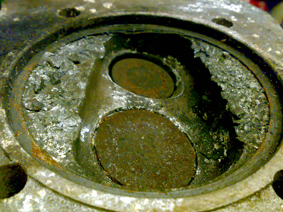 I'm not wishing to patronise anyone but for those with less experience we are seeing the bits from the broken up valve seat having been pounded into the cylinder head, looking like nuts on an iced cake. It's the inlet valve that has failed to stay where it should and we can see a (dark) ring round the (smaller) valve head, which is the space where the seat used to be. This is what it should look like - with a little coke build up and so on but otherwise in good shape: 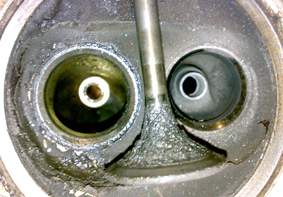 More recently, last summer in fact, I had the misfortune to suffer something similar - bad noises, tho not quite as bad as before, and loss of power. I got someone else to do the work for me this time (thanks again Colin in Barrow!) and what was found looked like this: 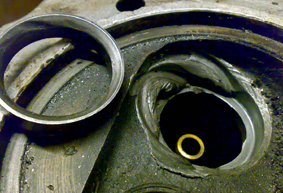 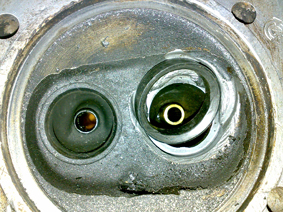 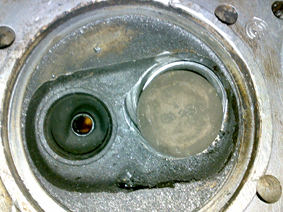 This time the seat had not broken up - it had wrecked the head but at least the piston was still ok - it only suffered a very slight mark that was smoothed out. Here's some more pics from different angles, with and without the valve in place - the dislodged seat had been pounded into the head by the piston hammering on the valve but in two different positions - with big indentations to show this. Even the valve seat, which is made from really tough steel has been marked by this pounding.

Other things that need to be in good order and not jammed closed in the wrong place is the cooling-air flaps - the thermostat should failsafe so the engine would be overcooled, or more accurately, slow to warm up in cold conditions. If the flaps have been left out altogether then this is very bad - one of them is really important in that it directs air into the oil cooler. When Laurie Pettitt built me an engine he suggested an extra oil cooler, possibly in the airflow pulled in by the alternator-mounted fan, would help for loaded campers.

I think I'm guilty of sometimes expecting too much of these engines - I drive modern turbo diesels at work and have a Golf GT Tdi 130 as a daily. Then I go and forget that a 25 year old loaded camper, sometimes with a big open canoe on the roof will not do anywhere near the same performance on the motorway or up hills etc with an engine of half the power. I need to be even more reasonable and kind to it! - which I am most of the time... I was in Spain last summer and it was fairly hot - oil temp was reading around 130 a couple of times, but I'm not entirely convinced the gauge is accurate. From Tex Ritter: I fall into the same category Keith, we're always fully loaded on our jollies but sometimes forget that the engine is of 1980 vintage.

From toomanytoys: Ignition timing is crucial on these engines.. My feeling is the std setting is too retarded and a slight advance should be made, especially as they run on 95UL as IIRC they are set up to run 92UL...... (2 star)

95UL is more resistant to "knock/Pinking" and the combustion takes place slightly later because of it, this puts heat up the exhaust..

This is one of the factors with LPG.. why everyone says to advance the timing... same thing happens..

From Jason K Once set right these motors are super tough; the faster you go the more air gets pumped; it’s not revs that kill ‘em it’s labouring in top when you should be down a gear!! Mixture and timing are crucial, I found (on a rolling road) my stock Solex carbs were running far too lean at the top end, so had the jets opened which was much better in terms of performance and mpg, later I had a pair of Delortos on, but again I took it to be jetted properly on a rolling road. When you buy carbs they will come with jets from the suppliers but EVERY engine is different and that’s why you should always get them set on a rolling road. My old air-cooled would sit at 70 to 75 mph no problems and steam up hills! And that was a hi top too. Set them right and they are a fantastic motor.