mart 475: Hi any help with this would be greatly appreciated. When I start my bus it idles at 800 ish rpm but after a short distance this becomes 2000 rpm. If I revved it heavily it would drop back down to 1200 rpm but recently the heavy rev tactic hasn't been working and it's sticking at 2000 rpm! It does drop for a split second but the rev counter bounces straight back up to 2000rpm.

My bus is a 1987 club joker 2.1 petrol. I replaced the coil yesterday although this is probably a coincidence but yesterday was the day of the 2000rpm syndrome beginning and it's the same today. Prior to that the bus hadn't moved for a week.

mart 475: Today I checked all connections which appeared sound with the bus idling at 2000 rpm then when i replaced the coil last week - a yellow block, which appeared to come out of the two pin side of the coil, was disconnected. I thought that I must have knocked it so I re-connected it and thought no more. However, with the bus idling fast I disconnected said block and hey presto, immediate reduction in revs to 800rpm. I know this is probably both good and bad! Good 'cos it solved my 1st problem but bad cos it means that summething else is up! Any thoughts and help you good people have would be greatly appreciated.

Fritz: This ringed item controls idle speed,if it is working properly it will buzz when engine is running. What is yours doing at any given time ? 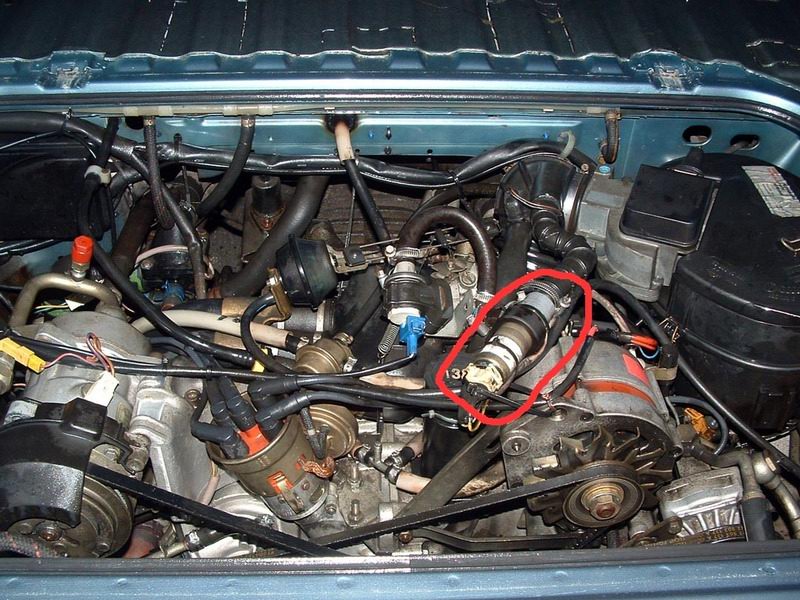 mart 475: Hi Fritz, I checked the item ringed in your pic and it aint making a sound, if however i stand at the rear o/s vent. I can hear buzzing but nowt from the unit itself. The bus runs great for 10 mins at 800 rpm idle and then jumps up to 2000.

HarryMann: Try cleaning it out with carb cleaner - a good old squirt both ways..

Remake the T2 sender connection on the thermostat, check the wiring for breaks, when its idling fast, move the T2 sender wiring about. Check the connections on the AFM and take a look behind the o/s tailight, which compartment contains the unit (ICSU) that controls that Idle Stabilising Unit Device(ISU) .. If it's soaking wet in there then dry it out and clean/remake the connections.

and take action if any of the symptons seem to apply, or any of the actions make sense e.g. poor, damp or corroded connections.

sonic23: Aha - I too have the same problem at the moment and believe I've isolated it to being a faulty Idle Stablization Control Unit (ISCU) (Maybe not, see below)

Note: I've re-adjused the throttle valve and made sure the micro-switch is functioning as per Bentley.

Unless I'm really mistaken, that little Yellow connector that you joined together is from terminal 1 on the coil to terminal 17 on the ISCU. Here's a little test - remake this connection > Revs go back up. Now go the ISV itself, and unplug the connector. Do the revs drop again? If they do - it means the ISV is working, but the ISCU is not.

If you unplugged it and the revs didn't drop - it would mean that the ISV is probably stuck open (Carb cleaner time).

BTW, there's lots of info on this on thesamba.com. A guy called tencentlife seems to be the guru. (Search on ISV and ISCU within the vanagon/eurovan forum):

Here's the extra set of tests you need to do to establish if it's the ISCU or the Throttle body switch. You will need a multimeter (We've already established that terminal 1 on the coil is feeding pin 17 on the ISCU by you plugging in/unplugging that yellow connector. (This is the idle signal from the ECU)

With everything connected up so that it will hi rev at Idle:

1. If running, stop the engine, then Remove the O/S rear light , hang the ISCU out the light opening so you can get access to it and then remove the ISCU.

2. Start the engine and let it idle from cold

3. You can see on the ISCU connector base (not the ISCU itself) lots of tiny pin numbers. Measure the voltage between 5 and 14. This should give the main battery voltage.

........HOWEVER - if you don't see 5V it means that your throttle body switch is not closing at Idle....this is what threw me. I tested the Throttle body switch with the motor not running - moving back and forth by hand, and by using the accelerator cable. However for come reason as soon as the engine was actually running, this was enough to not close the switch at Idle!!!!!! The good folks on the Samba have suggested that it was the buttefly valve inside the throttle body that was sticking....that and/or the accelerator cable was just a little too tight.

So.....I've just completely stripped down the Throttle body, cleaned it, very lightly polished it, greased and put it back together. I centred the butterfly valve making sure that it was not bindning anywhere. I then set the switch settings as per bently. (The idle stop first of all, then the actual switch). Finally I reattached the Throttlebody and then backed off the accelerator cable 1-2mm from where it previously was.