purple / purple with either white or black

green / green with either black or white 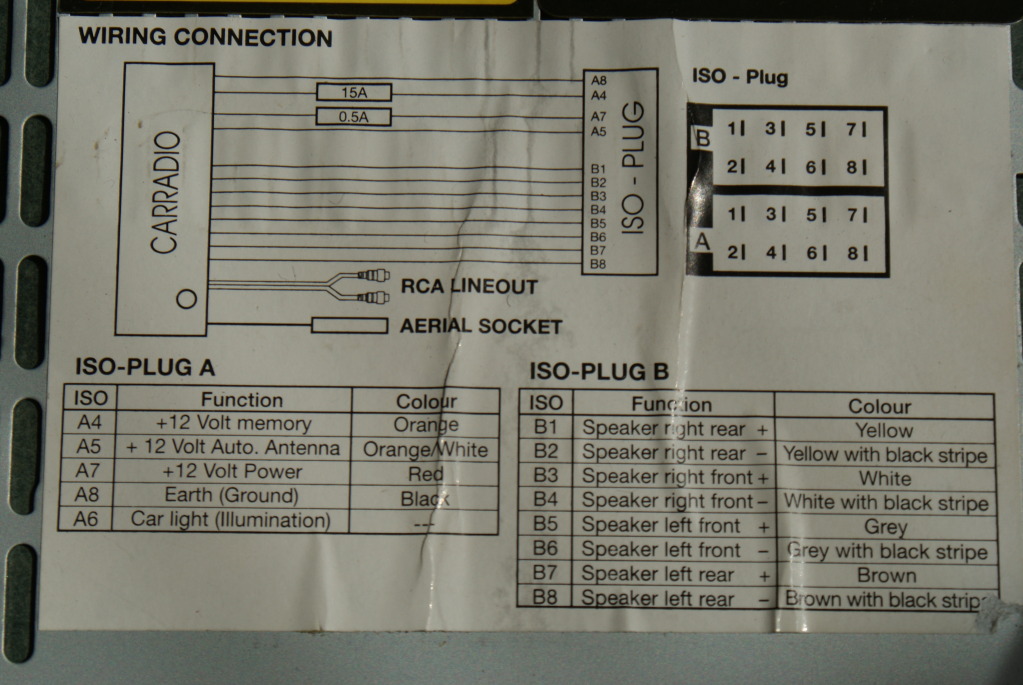 I found the need to fit a spacer between the 'cage and dash, having already lost one wiring loom due to chafing. Pick these up in smaller, older motor factors that don't change thier stock regularly, may be avaliable in other motor factors or you could make your own. Holds the cage more securly than just bending over differnt tabs, leaving the cage 'hanging out' and looks tidier than not pushing the stereo in properly. Also gives you some room to play with for RCA's if you get/make a spacer big enough.

Apparently you can fit an 8X9 at an angle in the door, I think I have a 6" JBL in the front lower doors and 8X9 magnats in the tail gate works OK for me. Enough to drown out wind/engine/children noises if need be. From memory had to lose the map pocket to put the larger speakers in, but hey! to remove door card you need to peel back the plastic cover on your window winder and undo the screw to pull it off. Also you need to pop out the plastic trim thingy from under the door open lever with a screw driver and undo the screw that holds that mechanism in place and remove it. Your door card will then pop off, it has several plastic retainers around the edge that just pull out. there is (or should be ) a plastic sheet that covers the upper portion of the door which prevents you installing anything in the top half of the door, you could remove it but it will make your van draughtier and will encourage moisture to build up in the doors leading to rot. in fact whilst your in there it may be an idea to hoover out that lower bit where the speaker is going to go and paint as best as you can with black waxoyl, this will help reduce tinny buzz you some times get from the speakers in the doors and may help your doors live a few more years. Make sure you check and recheck your polarity on the speakers, if your not sure which tab is which is which touch a 9 volt battery to the wires and note the direction the speaker jumps, if it jumps out the wire you touched the positive side of the battery to is the positive terminal on the speaker. (only do this momentarily) needless to say make sure any wiring is secure and insulated. I understand that soldered conections with heat shrink are the best. You wouldn't be the first one to lose a van to dodgy wiring if it burns.

The speaker wires are thin pairs, of either grey or brown wires, and one wire in each pair will have a coloured stripe running down it. This coloured stripe should be considered as the speaker + (positive) wire.

There will be one live wire (Red). Use a bulb earthed to a bare bit of metal to check. (this is a better way of doing it than even using a proper test meter for the home radio fitter by the way,

Some wires can "appear" to be live when tested by a meter, but as the meter does not put any load on the wire, it can give a false reading.

The wire might not be comming directly from it's appropriate fuse, but instead, be going via another piece of equipment.

By testing it with a bulb, earthed to a clean bit of bare metal on the body, you are putting it under load, and the bulb will only glow brightly if the wire is a genuine live feed !! )

Tip 2 = Be very carefull when messing with the live wires, they are not dangerous to you, but a simple, easily made slip and you can blow a fuse, then spend 10 minutes finding which one, etc, very annoying. Or, it can touch on a wire comming from the stereo and instantly wreck it.

Tip 3 = First test to be done at a LOW volume, if you don't here sound comming from it at low volume DON'T crank it up ( it's an instinct to do that !! ) if there is summat wrong with your speaker wiring and you crank it up you will blow the output chip = expensive repair.

Take care with that live wire when it is hanging loose from the dash, they always head striaght for the worst place to short against !!

Oh and remember the radio will have two wires that need to be live. One is for the main power ( sometimes connected to the one that goes on and off with the ignition so the radio goes off when you take the key out (perhaps not desirable in a camper van)

And one that feeds the radio station memory chip, this needs to stay live all the time.

Another wire comming from the radio (usually yellow) comes live when you turn the radio on ( this is for electric aerials etc ) take care this wire, if not used, is insulated with tape or a "chocky block connector" Some wires can "appear" to be live when tested by a meter, but as the meter does not put any load on the wire, it can give a false reading.

The wire might not be comming directly from it's appropriate fuse, but instead, be going via another piece of equipment.

By testing it with a bulb, earthed to a clean bit of bare metal on the body, you are putting it under load, and the bulb will only glow brightly if the wire is a genuine live feed.

OK - firstly if you like playing rave or reggae, loud, on a powerful system, then no the wire is not up to it.

But for "normal" use it is fine.

This is not really a safety issue by the way, it is more that during very loud bass passages in the music, such as a reggae beat or rave drum and bass sounds, the wire cannot pass enough current to produce the volume, and the bass gets distorted. (btw, this in turn distorts the other ranges due to a thing called "modulation", but that is even more boring ( tho I can if you want Smile )

In my opinion, if you are not using any external amps, then the supplied wiring is fine.

Look at the thickness of the main + wire comming out of the radio and consider that as OK ( the radio manufacturer did ! ).

The power ( measured in Amps ) that must go down the cable roughly equals the TOTAL power output in Watts, divided by the Volts ( 12 ) then mutiplied by 1.5.

The problem is that nowadays manufacturers tell lies about the power output of their stereos to sell them.

If it does not have a separate power amp it is very unlikely to be more than a total of 80 Watts ( 4 outputs at 20 Watts to each speaker ) despite what may be printed on the box or leaflet.

Plus there are many different ways to measure power, RMS is the scientific way but gives the lowest figure so makers tend to use meaningless figures such as "Peak Power Output" or even "Power Peak Input".

Re what wire to use.

Common sense plays a big part here. If you feel the need to upgrade the wiring, then you might as well get some nice thick stuff as it is not much dearer than everage stuff. Mains cable is fine, especially as it is useually double insulated so is less prone to chaffing through against rough metal edges ( though you should avoid this of course anyway, with rubber grommets etc ).

Plus you can twist the 2 or 3 wires in the mains cable together to double or triple the power handling.

Always use earth wires, from the radio (or amp), that are as short as possible and go to a nice bright good connection to a bare bit of metal bodywork. This will help eliminate unwanted noises. Don't forget this wire needs to be as thick as the power wire !!

If adding wires to the battery ALWAYS stick a suitable high quality "inline" fuse, right close to where the wire is connected to the + positive terminal on the battery.

All this is for wiring a "normal" stereo. If you are wiring a huge "max power" type 100000 Watt system, then you have more boring stuff to learn ( I can go on if you want Rolling Eyes - or have I gone on long enough, probably)