Caravelles have pre-existing holes and threaded nuts awaiting your 3 point belt. If you have a factory converted camper the chances are it left the factory as a panel van and you will need to add your own mounting points. You can tell if your van is converted as the windows in the rear will have a squidgy bit of rubber betweeen the outside panel where the glass rubber sits and the inside panel which will have a plastic covering strip to hide the edge where the hole for the window was cut.
It is easy to find these existing threaded anchor points - they are usually fitted with a threaded dust cap - see photo below. By carefully feeling along the lining (or removing it), you will find a depression where the cap is located. The cap can be unscrewed with a cross-head driver. Here is the MOT requirements

Securon do a belt that can have the retractor mounted at any angle. There is no lower mounting point so they do not need the interior to be cut. These are by far and away the tidiest option to fitting. The part number is 514/30 it has nearly 270CM of retractable web so should be plenty long enough. If you order a belt from just campers they will supply a seat belt CV500 which has the lower mount and will require some modification to your interior to fit. These are sold on eBay but it may be worth asking trade parts suppliers such as Unipart / TPS/ Euro Car Parts. 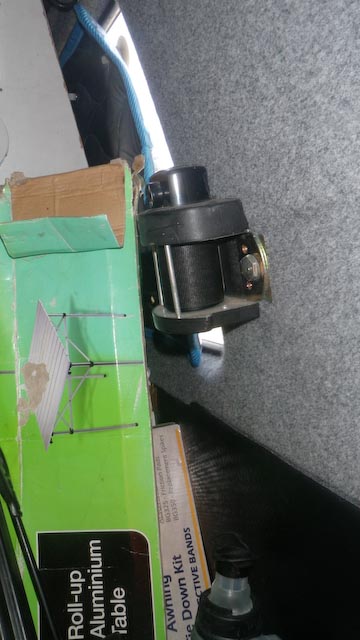 Middle Seat Seatbelts
There are at least 2 approaches to fitting middle seat 3-point seatbelts. If you use the original double (2 person) Caravelle seats, then they are fitted with lap belts as standard. These can be replaced with 3-point seatbelts; the seat next to the window can use an anchor fitted to the side panel (C pillar) in between the windows. Some T25s were factory fitted with captured nuts providing a seatbelt anchor point. (see photo below) 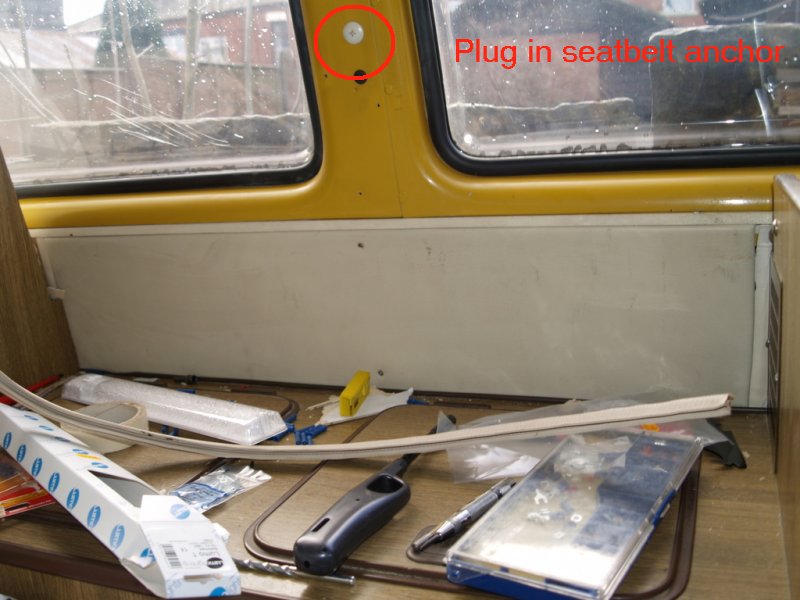 If not, then these need to be added - a kit to do this is available from JK.

As mentioned above, pre-existing threaded anchor points may be available. The photos below show their location. You can fit the lower anchor and bring the belt up to the top of the board as shown in the 1st photo, or with a bit of cutting and fitting, you can do the same as the WhiteStar install shown in the second photo.
Photo 1: Caravelle install 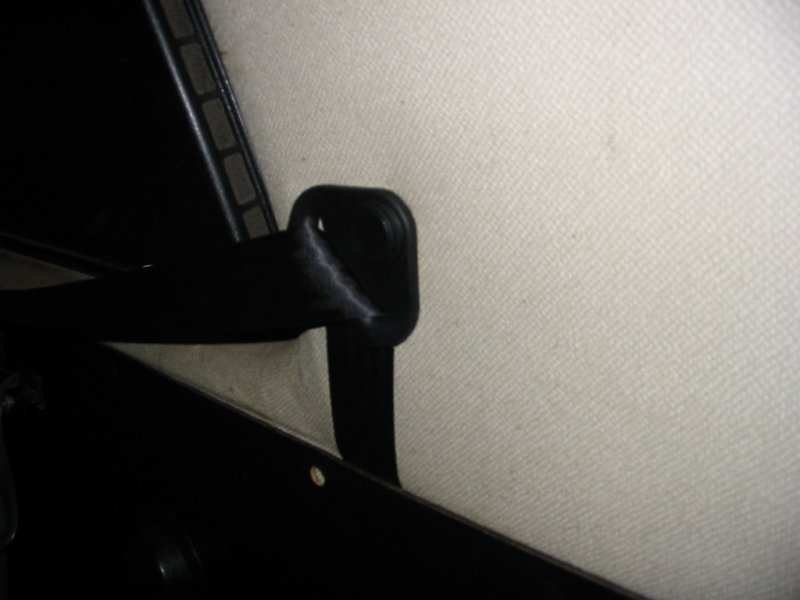 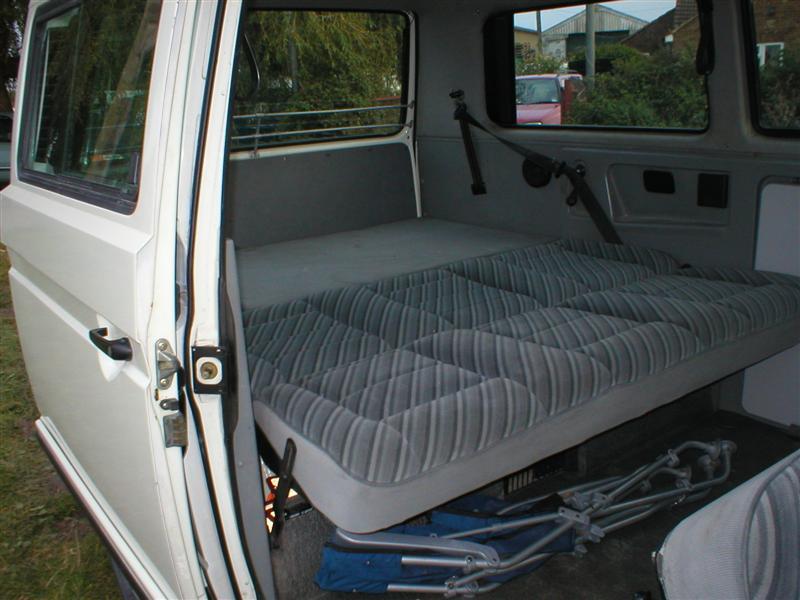 The lower anchors are shown below. 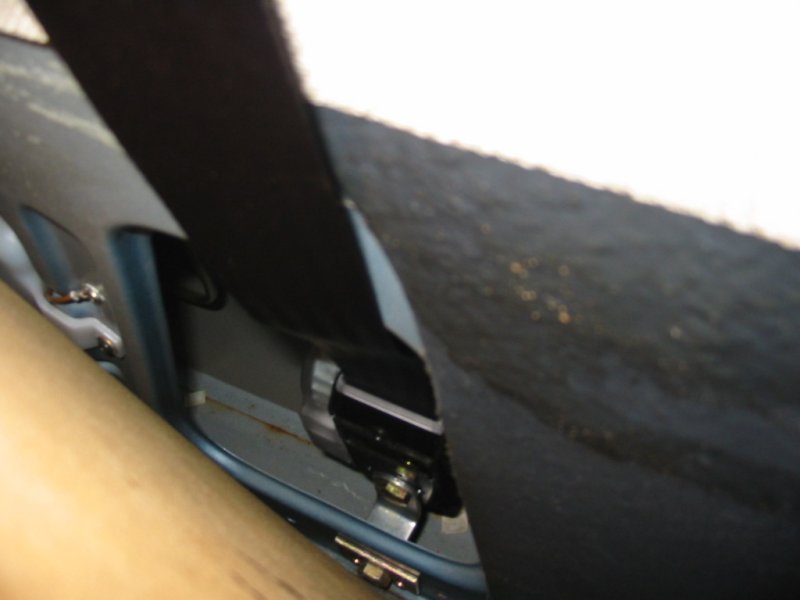 I fitted a 3pt belt last year on a 3/4 bed. Got the kit from Brickwerks. http://www.brickwerks.co.uk/ Here's some pics 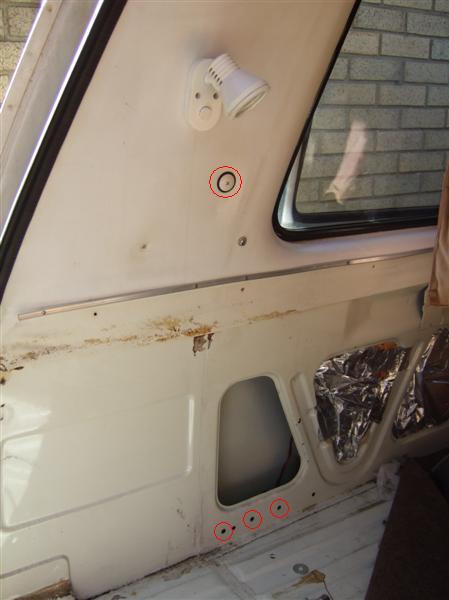 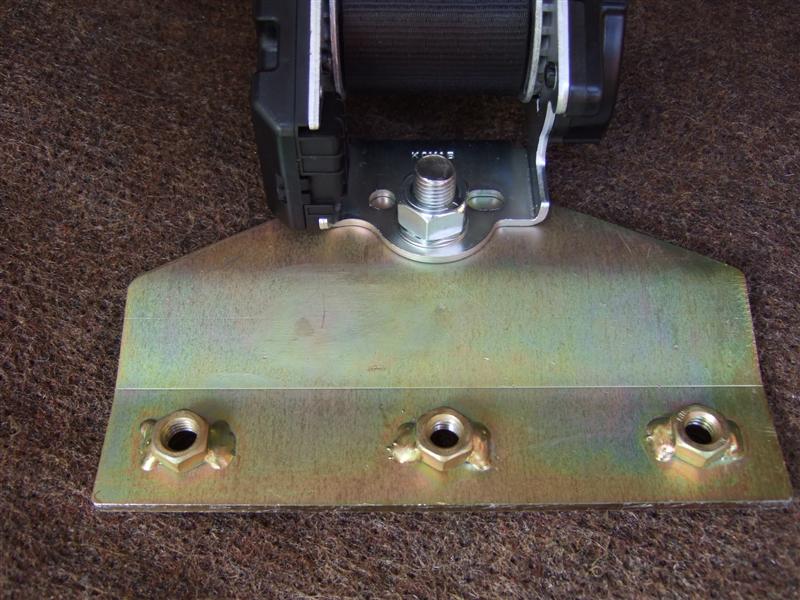 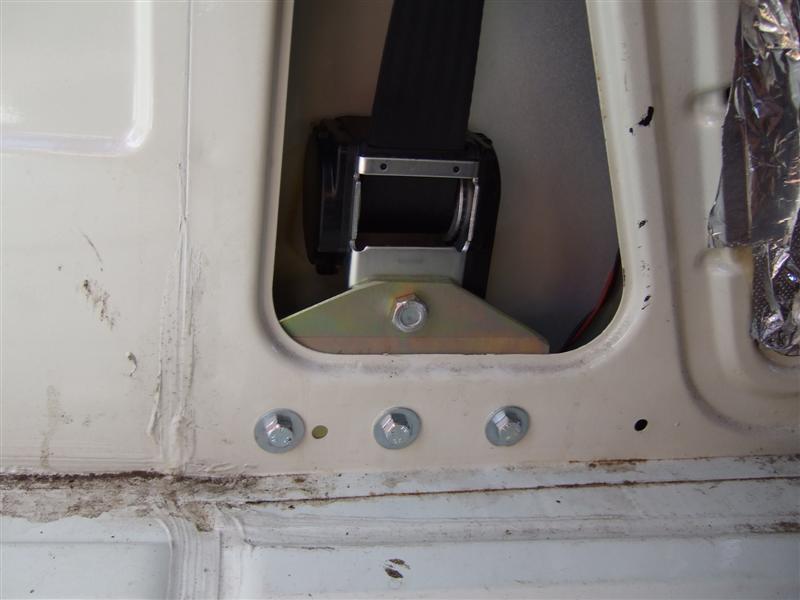 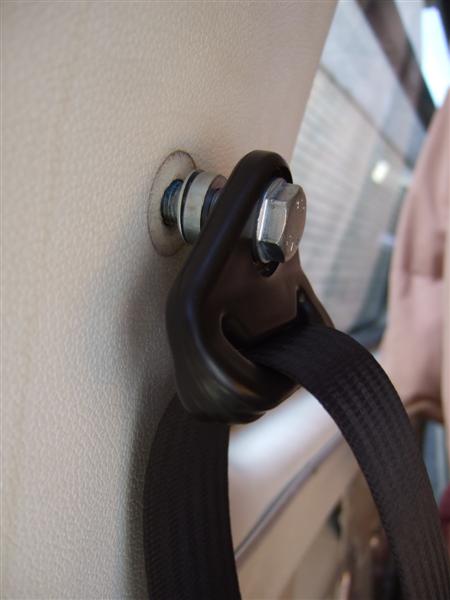 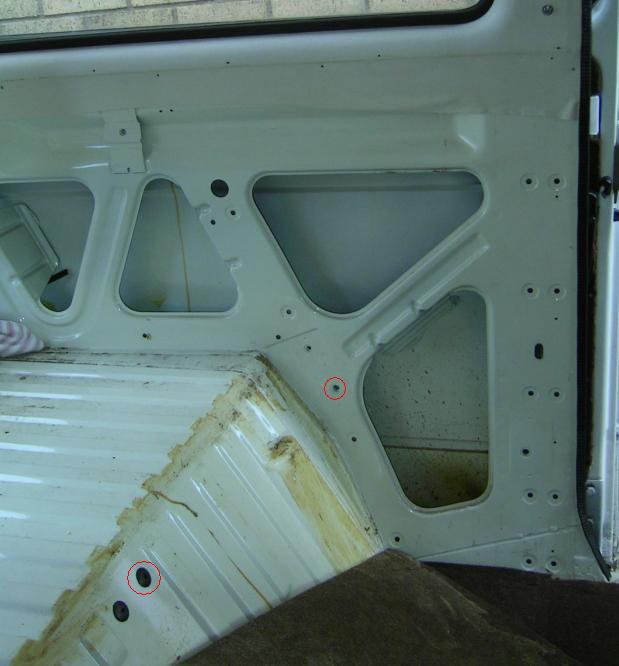 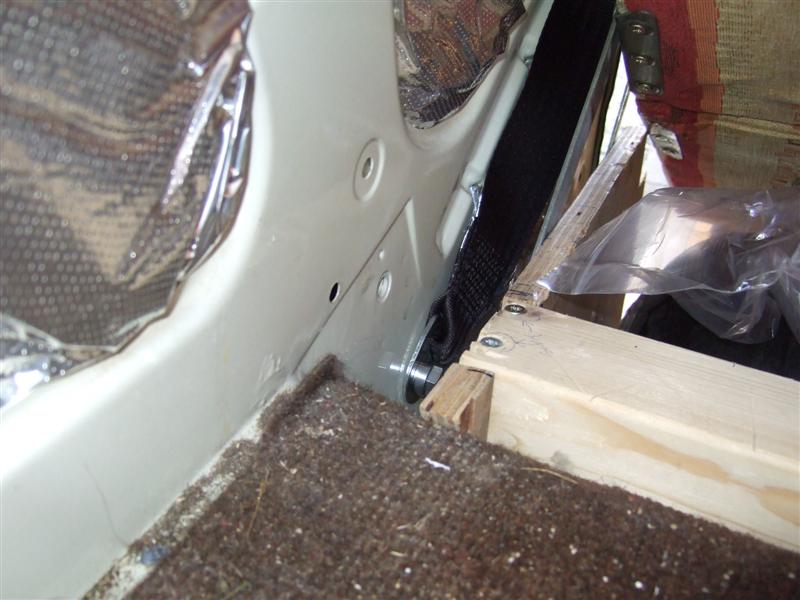 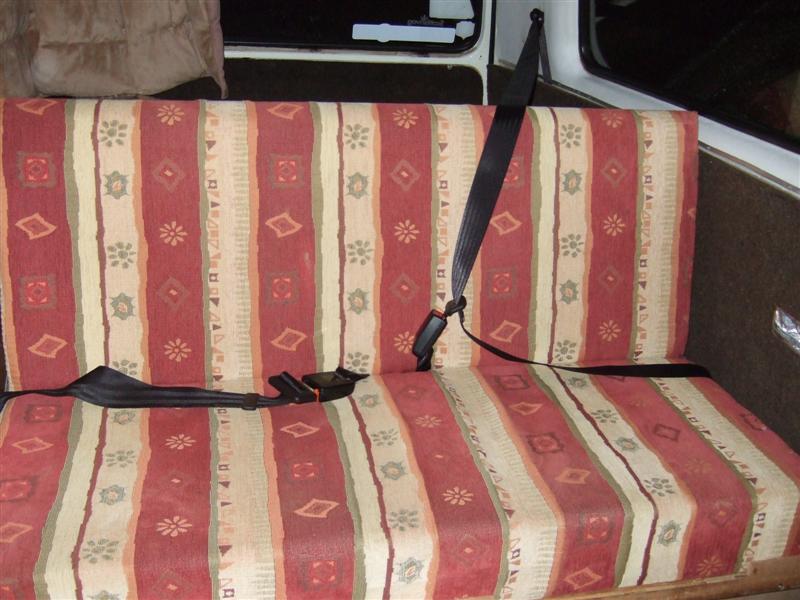 Jiffies Thanks for the great pictures. Am I right in thinking the kit Brickwerks sell has one over the shoulder belt & one lap belt? Is there a way of having two over the shoulder seat belts if a have a ¾ width rock & roll bed with cupboards on one side?

Willoughby I only have the two belts one lap one three-point. I don't have one on the cupboard side. :(

The brickwerks kit has one three point belt (left or right) and all the bits you need to fit.

Not sure if/how you can fit 2 three-point belts in you have cupboard fitted some one will be along soon to let us know.

Jiffies: The only thing I can think of is to have the 3 point belt as you suggest on one side. On the side with the furniture I wonder whether a 3 point racing type harness would work with the 3 fixing points mounted to engine bay & the shoulder straps going over the back of the rock & roll bed

Willard: Had an issue with belt location when first got my van a couple of years ago. It had no rear belts and with 2 kids was THE first thing I got sorted after some head scratching and searching on here...which was very helpful if only to make me realise what wouldn't work in my van.

I have a 3/4 R&R bed and have 2 3pt belts and a centre lap strap. I have fitted both the reel and anchored end under the seat, looping THE bebbing up and over the seat back. You can use the mid point guide slit bit in the kit to fit to the rear face of the seat back to ensure that the belt stays at THE correct shoulder position. I used the marked positions for the receivers and drilled the angled engine section and wheel arch to fit the reinforcing plates for the reel and anchored end, and jobs a good-un. This has also been through an MOT and the only comment was that the belt sometimes didn't reel in as quickly as it should but a minor repositioning of the guide onteh seat rear solved this.

Also, don't know if it's been mentioned before, but a seat that is not secured to the frame (ie the foam to the R&R bed) is an MOT failure as the whole lot could slide under the belt in a severe head on.