When a thread is 'suspect' it is generally a good idea to clean the threads up earlier rather than later, before more damage occurs (after a nut or bolt wants to keep starting cross-threaded or continues to square-off the triangular thread, being later and sometimes too late). The Mk. 1 eyeball is usually the best tool here, but if the nut or bolt won't run up and down fairly easily, that's a big clue of course...

Running a new nut or a thread-die up an old bolt or a new bolt or tap down a suspect thread hole can sometimes be good enough.

In the case of a blind cylinder head bolt hole that's impossible to see down, and one where its unlikely you may have the correct 'bottom' tap for, few things apply...

3) New bolts are frequently used, just to be sure and are mandatory if the design uses stretch bolts (e.g. VW diesels)

5) Oil the bolts (with engine oil, as per stretch bolt fitting guidelines) but let them drain on a cloth for a good while.

Just to be sure all the threads feel the same and run easily and are clean you can make a thread chaser from an old bolt, running it down carefully, checking how far each one goes, and cleaning the grooves out after each one. The stuff in those grooves will tell its own story... Or of course, you can use a tap, but make darn sure its the exact thread match before you do!

To make a bolt into a chaser, hacksaw or grind 3 slots into the first few threads of a good bolt. Then clean it up with a Thread File to remove the burrs or failing that with a rotary wire brush or minature triangular file. 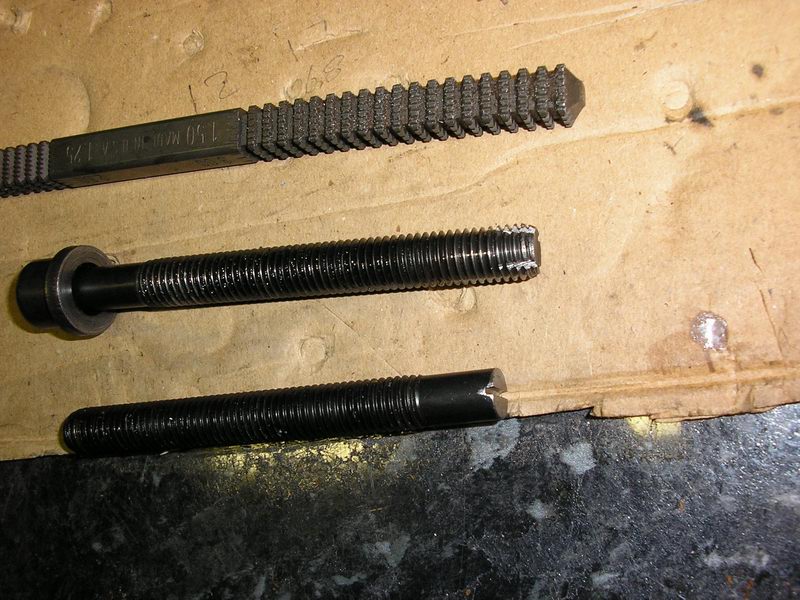 The bottom bolt in the picture is cut-off and slotted - two of these are useful for locating the head on engines that are fitted on the slant, such as the VW T25 diesels - stops head sliding off the gasket.