One can however, be quite easily made from a suitable punch or chisel, using a bench grinder - as illustrated below.

Note the slight waisting down of the width, to gain access and accuracy File:IMG 5743(crop).JPG

A good example of its use would be the large countersunk set-screws that hold discs and drums on. On the T25, the Syncro has these as the disc/hub design is of that type where the discs just slot over the wheel studs, the set screw just securing it whilst the wheel is off. In this case the punch would be used on the only available face, initially coming in almost directly from the front, developing a nick in the screw face and then progressively angling the tool to develop some loosening-torque at every blow. Because it is also shocking the screw inwards as well as around, corrosion is broken and the screw loosens up, however rusted up on its countersunk face.

If the tool is angled rotationally too much too early, it will either slip or jump off or actually chisel off a chip - not what is wanted but, if so, start again on another area and develop your technique. Gain a good foothold before angling around too much. Judgement is everything, start gently and build up to some strong blows. Generally, use a club hammer for ease of control, not a lightweight or claw hammer which requires swinging too much. The control is in holding the punch accurately, the hammer blow should be the easy bit.

N.B. It is the bluff face of the punch combined with the technique that allows a chiselling action without tearing off strips or chips from the screw/nut/bolt head. Although many use a chisel for this style of loosening, they are usually too wide and too sharp. Look carefully how the tool has been shaped, one bluff and one sharper face, as well as a thinning down on width. When a large flat on a nut or bolt presents itself, it is tempting to use that to drive directly around, but it is not the same as driving inwards and around on the front (outward) face. When the driving INWARDS + AROUND happens simultaneously, the shock loosening THEN comes into play much like an Impact Screwdriver.

Always when trying to loosen nuts, bolts and screws, watch very carefully for the first signs, however slight, of some movement - sometimes a quick scratch/scribe across the adjacent surfaces helps to spot this. At that point you know you're winning and might then revert to the spanner/screwdriver.

Whilst this method usually means sacrificing the screw/bolt itself, on larger fasteners it's possible to remove them without excessive damage. Large bolts/sump plugs etc can be initially shock-loosened and then undone conventionally, but this depends on the range of punch sizes available.

The illustrated punch was made from a medium sized 6-8" punch from a fairly cheap Screwfix set, keep edge moving and cool frequently when grinding down - don't use really rubbish cheap punches or chisels!.

Good luck if you make one, this is a powerful tool to have tucked away when things don't go according to plan, and used cleverly can sometimes do a lot less harm than screwdrivers, spanners and sockets on unyielding fastener heads.

Here's another one, proprietary, perfect for slitting down internal bushes for removal... a bit sharp for most impact punching jobs though

This filler-plug could-not be removed in-situ, even with transaxle out the 17mm plug socket was tearing it apart. A few minutes with the bolt drift and club hammer; three stabs at it, moving around when material shears badly, angling it inwards as well as around loosened it enough to remove with socket. £3 for a new plug and job's a good'un! 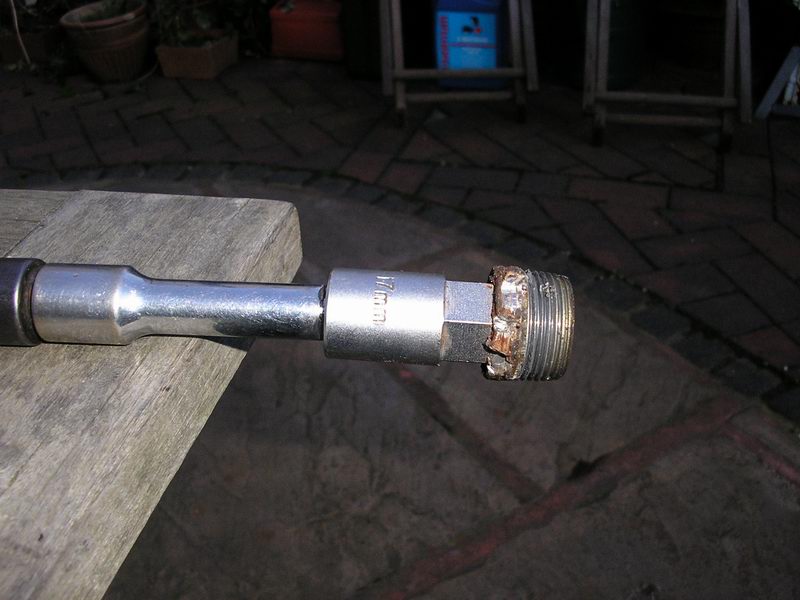