HarryMann: These come in expensive and cheap varieties and work somewhat differently

The cheap ones work by revving up a spinning mass and then engaging a pawl, so it transfers its energy to the socket. The one below takes about 3 seconds to apply its impact

They do work though, and can be quite useful, especially for removing bolts where you can't get a large powerbar onto, or where you can't stop the thing turning e.g. a crankshaft pulley nut. A msall 12V battery is quite sufficient, I use a small light motorcycle battery

This is a JCB cheapie from a newspaper offer, about £20 I think... 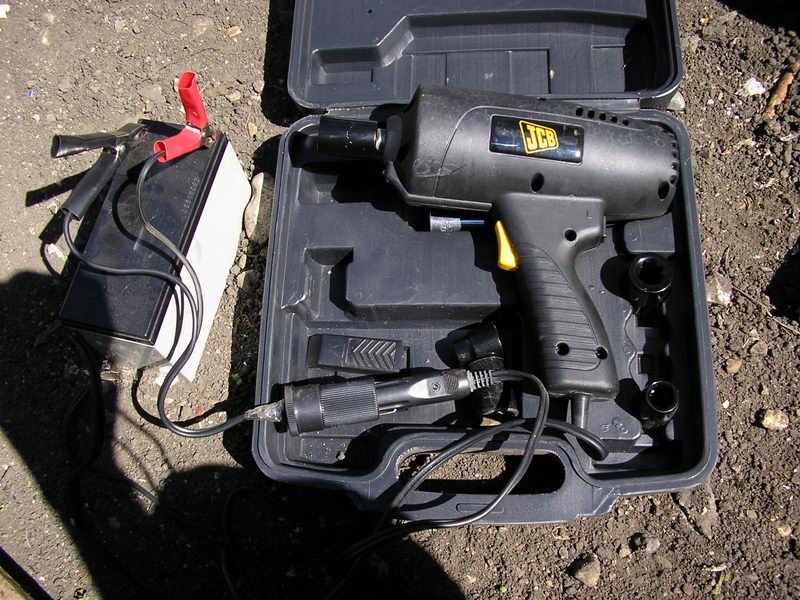 The expensive ones are what a lot of mechanics use these days, instead of compressed air tools, being more portable, much like a battery drill, or winder, but built from the outset as Impact drivers - good ones are not cheap (£150 upwards), Hitachi, Makita, deWalt or Sealey would be good makes for instance... the lower rated ones use 1 3/8 hex drive, mainly for driving large screws, the ones you prob. want have a 1/2" sq. drive, and start a roun 180~200 N-m. Even the top ones will have a job getting a T25 wheel nut off, in fact I've broken a 2 ft powerbar getting someon'es wheel nut off so that's not saying much the way they are overtightened and left to rust. But something a round 200~250 N-m is useful for quite a few jobs a round the vehicle.

Tip: High on the list of things not to leave lying a round for more than 5 seconds in public view - it'll dissapear