With the gear stick components dealt with, we move to the shift rod. Basically there are 3 components involved here, the front shift rod, the rear shift rod, and the shift lever (or selector assembly) which moves the short stub sticking out of the side of the gearbox and ultimately selects the gears inside the box.

The front and rear shift rods both run in plastic bushes, the shift lever is a ball and cup (socket) affair where the ball is nylon and the socket metal.

In my case all the areas were worn, if you got under the van and held the shift rod you could move it laterally and vertically (about 1-2mm play). There also seemed a fair bit of play in the shift lever ball joint (up/down movement)

To get at the shift rod bushes you have to disconnect the front and rear shift rods from each other. They are joined by a splined shaft/clamp which allows you to alter not only the length of the shaft but also the orientation i.e. you can rotate the rear shaft relative to the front. 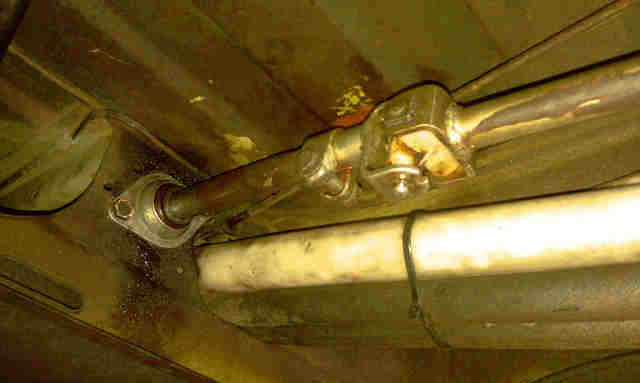 If you were setting up from scratch there are measurements and processes for getting this joint set up correctly as adjustments here fundamentally affect the movement of the shift lever and hence gear selection.

If your selection is working OK already then just make sure you mark/scribe this joint before splitting!! I put a daub of tippex on mine (pretty useless idea really as I then cleaned the shaft :oops: ) but also scribed the splines that were showing in the gap of the clamp – which was much more effective. 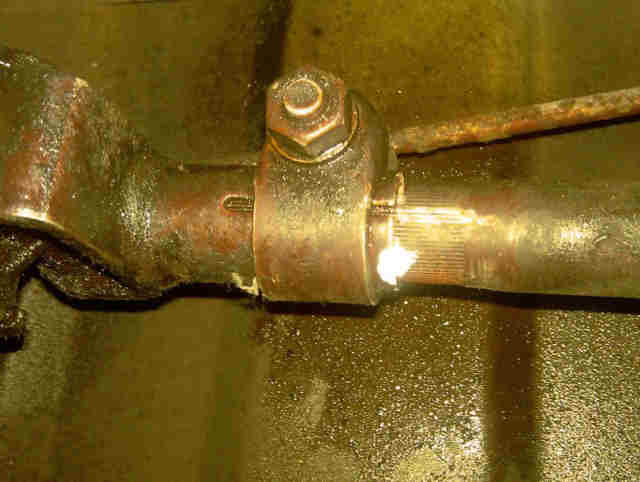 Loosen the clamp bolt, apply releasing fluid and gently work the shaft off the splines. You may find you need to gently tap with a hammer to help move it.

Once removed then undo the 2 bolts securing the bush assembly to the cross member and slide the assembly off the shift rod leaving it looking like this. 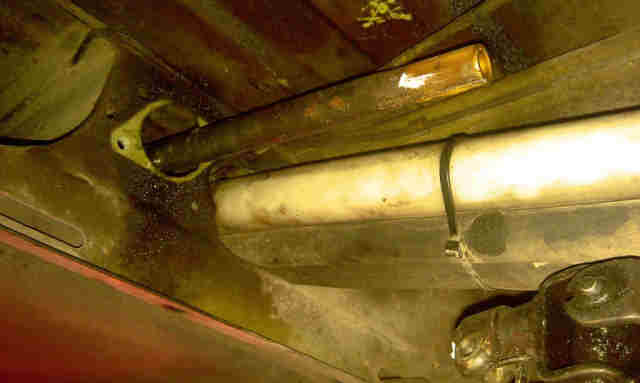 The rear bush mounting is bolted to the front of the transmission. 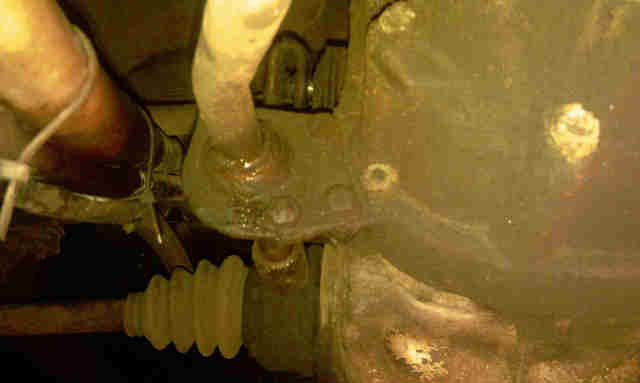 If it doesn’t then the lever is held onto the gearbox shaft with a 13mm retaining nut. Push a socket on where the arrow is and undo this nut then the shift lever will slide of the transmission shift shaft. NOTE: this lever is keyed (will only fit one way) so you don’t have to worry about marking its position. 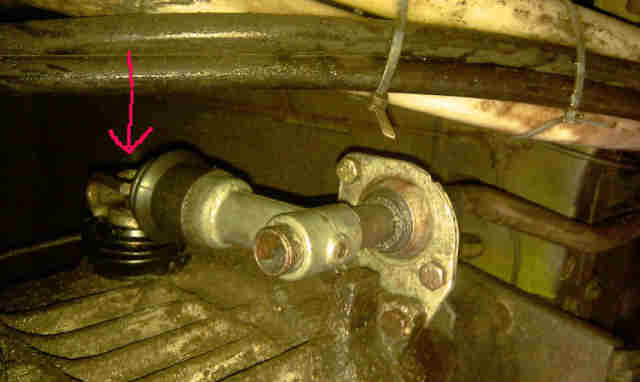 When you have done the two steps above you will have a collection of parts like this on your bench: 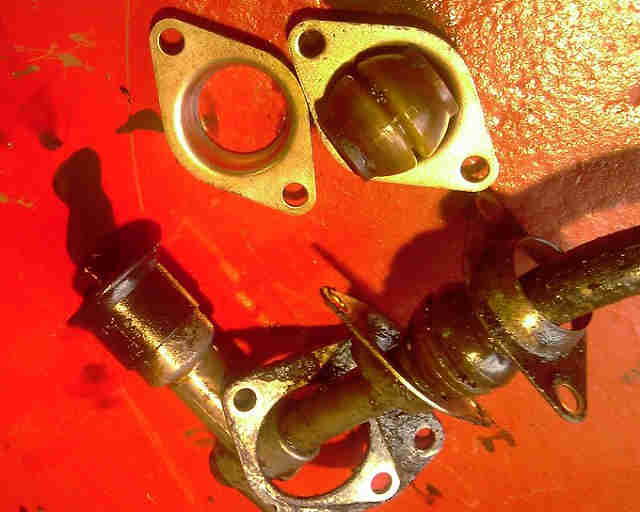 Find a suitable drift and drive the pin out INTO THE SOCKET. When you have done that, the shift lever will slide off the shaft (with a bit of encouragement) leaving you with a nice collection of parts to clean. 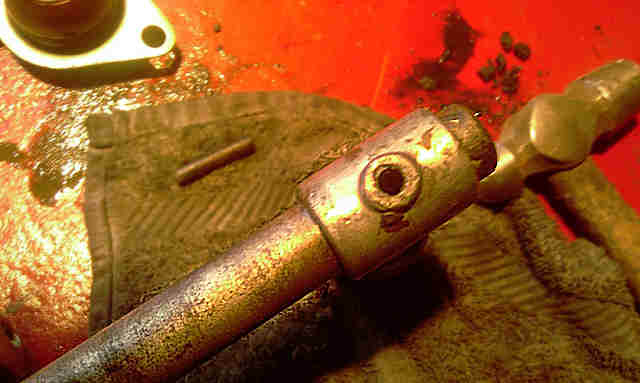 Components cleaned and new nylon bush all ready for reassembly: 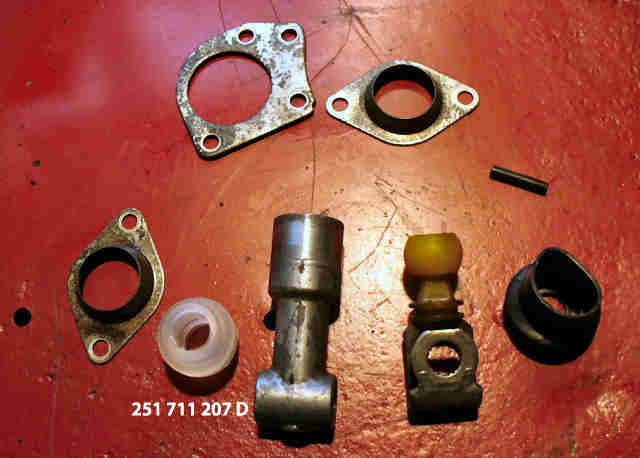 Covkid update: Some of these rear parts appear to be a little cheaper via ebay but you'll need to check whats in the kit and decide whether (once you tot up everything) there are any savings to be made. Search for "vw t25 gear kit" - this applies to rear components only. The front kit is close to £60 on ebay and via JK and VW Heritage so you can pay significantly more if you do not do your homework.

Campershack says: Refitting ball and spring. It's nigh on impossible to lever it in from the side. Use a blunt/flat ended rod or a long thin bolt through the small hole in the end to push the ball against the spring (easiest with the lever upside down in a vice). Then offer the clinch pin in sideways against the bolt. Quick flick of the wrist and it's one out/ one in. Put the spring and circlip in (if you removed them), grease up, ends on and you're done! Btw don't forget the rubber damper ring on the clinch pin!

Jamesakers: I did it by pushing the ball bearing into the spring through the hole and then slid the pin in. I think I used some stiff plastic tube which helped stop the ball popping sideways. 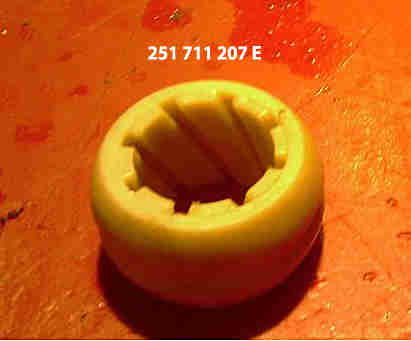 In theory later vans (85 onwards?) have the “one of each” variety, but Myrtle is an ’86 and has 2 the same so who knows! I would have a look underneath and check before ordering otherwise (like me) you will end up with the wrong bush.

Next I turned my attention to the shift lever. The ball didn’t look in too bad condition, I have measured it and it worked out at 29.57mm. It would be useful to know what a new one measures up at.

The socket, on the other hand, was in a right state (see below). The rubber boot had perished and the ally was heavily corroded – it may well be that this will need replacing – I will have to see what the finished setup is like. At the top of the socket this measured 30.40mm, about 0.6mm bigger than the ball. The rubber boot is approx £5 from http://www.brickwerks.co.uk/shop?page=shop.product_details&flypage=flypage.tpl&product_id=1173&category_id=99

Covkid: Thinking outside the box here (excuse the pun), if the socket is worn I see no reason why a small sleeve couldn't be made to fit at the top of the socket to stop the ball lifting out. On my own camper the ball and socket is loosely held together with cable ties which is a quick solution if the two are no longer an interference fit.

This socket is available new and in a stronger material than stock for approx £32 from http://www.brickwerks.co.uk/shop?page=shop.product_details&flypage=flypage.tpl&product_id=1529&category_id=99 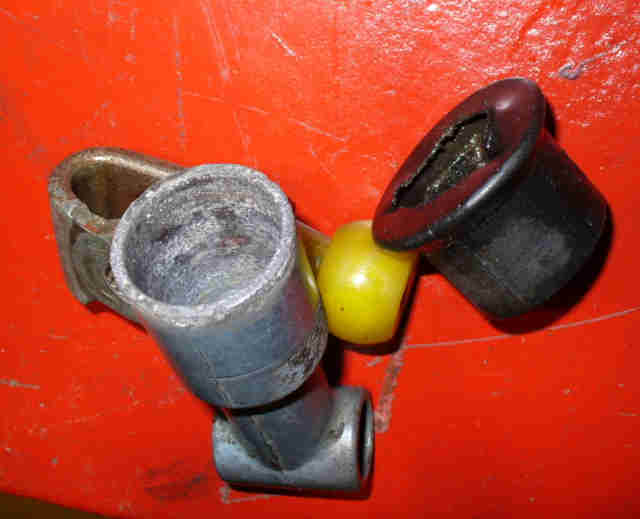 I also checked the shift lever shaft on the transmission as Aidan had pointed out that there looked to be a small oil leak. The shaft has no horizontal play but does have some vertical movement, with the shaft pulled out (4th/5th position) the end of the shaft moved about 0.25mm. Also, when sliding the shaft in and out there is a noticeable deposit of oil on the shaft so I reckon the seal needs replacing. Haven’t got one of these so that will have to be ordered up and fitted later. 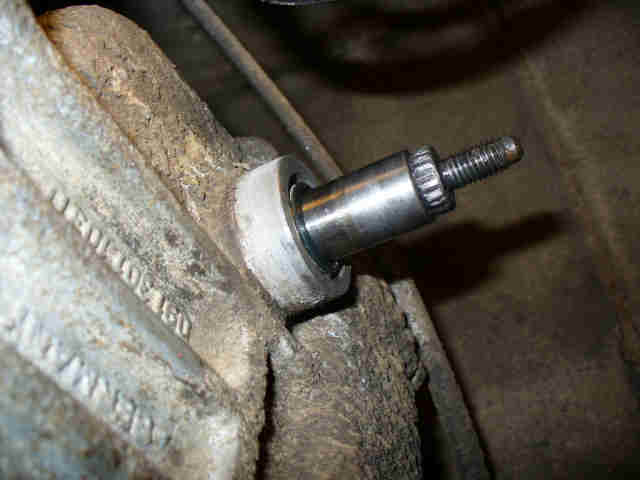 Reassembly is pretty straight forward. I cleaned up the shafts, refitted the shift lever and drove the pin in from inside the cup (NOTE, one end of the roll pin was noticeably smaller than the other – If you have a vernier or micrometer it is useful to know this and put the smaller end in first!)

I then filled the cup with moly grease and fitted a new boot to the socket. 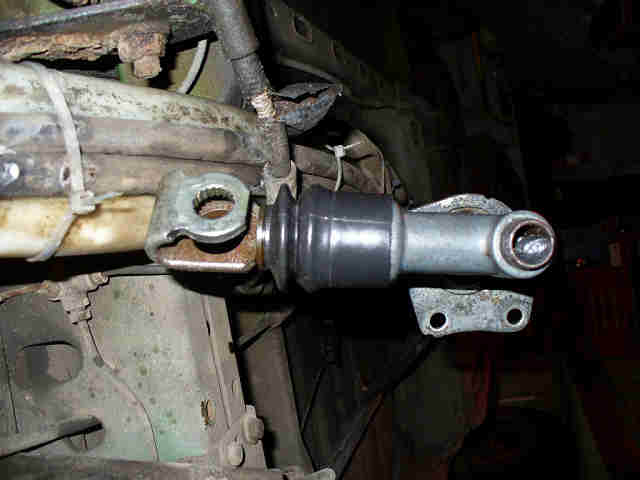 I then reassembled the front bushing and shifter rod and loosely bolted on before recoupling the splined shaft and clamp. To be honest I found the alignment pretty easy as I set the shift lever on the transmission so it was in neutral in the 2nd/3rd position (lever is vertical). If you then fit the splines 1 out you will find the fork on the gear lever won’t line up with the bushing on the front of the shift rod.

Once the splines were clamped up I then tighten all the other bushing mountings. Job done.