Diesel-engined T3/T25s are not immune to engine bay fires!

The main area that causes these (not uncommon) fires, is the electrical system engine bay junction box, n/s rear. This is the small black box attached to the engine bay firewall (!) in the left hand rear corner as you face the vehicle. Almost all the engine loom wiring goes into or exits this junction box, which contains a couple of round multi-connectors as well as the glow plug relay.

HarryMann: All a bit tight in there isn't it? In fact, due to the large currents used by the glow plug system and the tight space in that area with lots of wires close together this can be a bit of a fire hazard.

There's a 50~55 Amp fusible link in that box (for the glows) - first make sure it hasn't been replaced by a length of copper wire! If it's blown, GSF do them I believe. It's a thin grey coloured (tinned) metal strip, thinning in the middle and shopuld have the amperage stamped onto it. (If your glows don't work this is the first thing to check, but do also check why it might have blown, bad glow plug but more likely a short fo the wiring in the junction box or inadvertant short of the glo slupply busbar.

It is not easy, but keep this area as neat and tidy as possible, and pay particular attention to the condition of the wiring and the connections that relate to the (high-current) glow plug wires - if these should short for any reasonable length of time you could well have a plastics/electrical fire on your hands.

Make sure the wires in there are well separated and that the fusible link is in place, not shorted with heavy wire, and that nothing can touch the lnk[/color]

Additional: It's also not unknown for the Glows to be wired directly to a switch in the cab, if the raly box has been giving problems

Running 55 Amps up to a switch at the front is not a good idea, if it can be avoided... that's what relays are for.

NB. Smell acrid fumes after start up - immediately check this srea and look for smoke and smells in that area.

NB. Another area that is a candidate for electrical problems and fires is above the starter motor... the wiring from the battery +ve to the starter motor +ve can sometimes flex/wear and degrade to the point that engine rock puts a direct battery live onto the underbody recess in that area. Insulate these connections well and strap, wrap, and cable tie them securely against inadvertant contact with the vehicle bodwork. 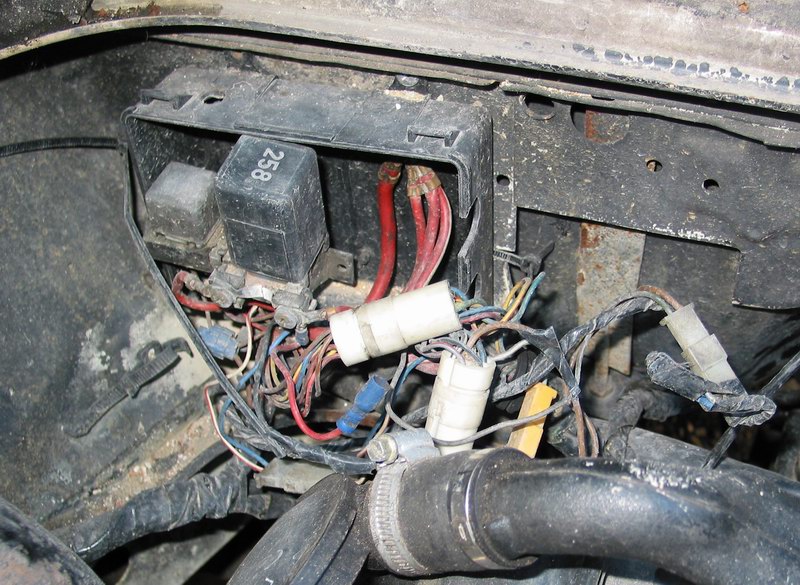 Note the broken fusible link for the glow plugs (relay 258)