== I wanted to get my head around this so I did a bit of digging in the fuse box head scratching in Bentley and the Westfalia diagrams and with a lot of help off the forum (thanks Bigherb especially) this is my understanding how the charging system works on a Westy.

Note the leisure relay 'earth' is cancelled out by the positive feed from the ignition this means the relay is fed 2 positive feeds to the switched side during engine cranking so the relay doesn't engage and the leisure battery and starting battery aren't connected until the engine has started. There are two benefits from this firstly the leisure doesn't sap current during engine starting, also there would be considerable current being pulled through the white red wire between the batteries from the starter motor. (Note: the main positive feed from the starting battery to the starter motor isn't shown on this diagram) 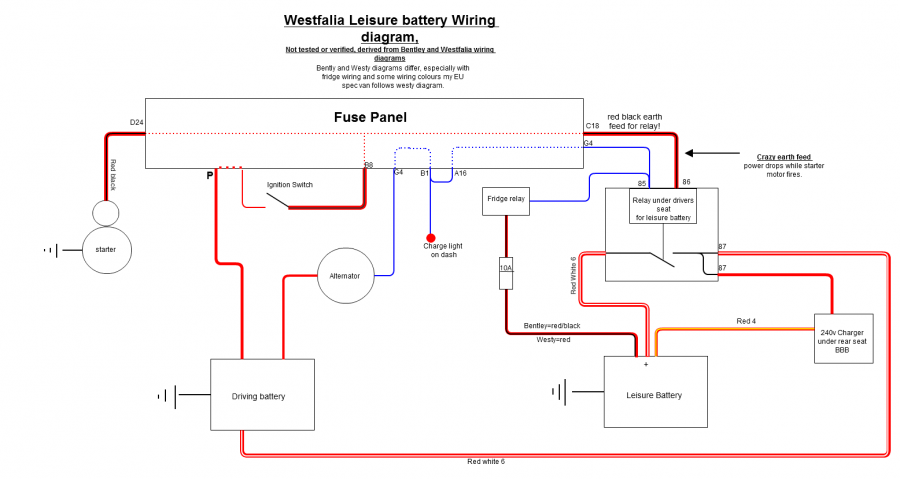 California Dreamin I do question the accuracy of the above diagram ^^^^ the pinouts do not match up with my own experiences and the pictures of the relay imply that it has two joined terminal 87's where as in my experience the relay fitted is a 'b' type which has an 87 & 87b which are NOT joined...this may not appear to be important until you realise that if they were permanently connected the fridge would work on 12 volts WITHOUT the engine running, flattening the leisure battery in a matter of hours if the user forgot to change to gas or mains.

Alternative UPGRADED relay to replace the weak original Westfalia relay mounted at the side of the leisure battery:

The correct relay is a single pole double contact SPDC, not to be confused with a Single pole double throw SPDT. Also known as Double make & break. NORMALLY OPEN (closes with engine running) The only 5 pin relay to have an 87b....notice that 87 & 87b are NOT joined *************this is very important.

A straight like for like replacement would be the easiest thing, however, this particular relay is becoming as rare as hens teeth to find.. Besides, now is your opportunity to upgrade to something more substantial, you will need to replace two terminal ends on the heavy wires going to terminal 30 & 87 on the relay, from 6.3mm (standard females) to larger 9.5mm ones but this new dedicated split charge relay is a 60 amp replacement, so ultimately will be more reliable. Look for a Lucas SRB630 or the Durite equivalent although the pins are slightly different again on this second product.

Comparing the old to new relay pin out numbers:

Notice***that C2 & C3 on this new relay are also NOT joined...just like the original :ok If they were connected, it would mean that the fridges 12 volt side, could be powered from the leisure battery even with the engine turned off.