From memory I think it was 24llbs full. Does anyone know the weight of an empty calor gas 4.5 kg Butane bottle (blue)so i can work out how much I have left. I have one of those regulators that change colour according to amount of gas, but it doesn't seem that good.

According to the Calor website the empy weight of the bottle is printed on the aluminium collar on the gas bottle in pounds and ounces. I have 3 bottles and each shows a different weight on the collar which confuses me a little.

Lloyd: 12 10 stamping is empty bottle weight (in lbs and ozs)

When you are using gas and pressure / flame drops at near empty tank, there is still a little gas left in the tank. That's why it weights a little more then tag says.

Use propane bottles in ours and have found this kind of calculation to be accurate.

Bowton Lad: I have one of those Gaslow (green/amber/red) gauges & it isn't really much good. My gauge was reading green & within 5 minutes the grill in my camper was struggling & the gas ran out. It didn't give any warning that the gas was about to run out.

Camping Gaz is normally Butane, though Propane-fill info is often on the bottom of the bottles' support ring, as should be tare weight

Butane and Propane are saturated hydrocarbons of the Alkanes (paraffin) family Commercial gases contain traces of other LPG type gases They are characterised by being more easily liquified at lower pressures than Natural Gas, and are derived directly from oil field gases or from the distillation process of oil products

H&S They are both heavier than air so should not be used nor stored underground, nor stored near drains and cellars

Thus a given mass of Butane will contain 12% more energy than that of Propane.

Thus Butane is not suitable for use in English winters, as it won't vaporise well (or at all) much below freezing.

Some Propane burners specify a 27 Mb (pressure for propane - e.g. US hobs) 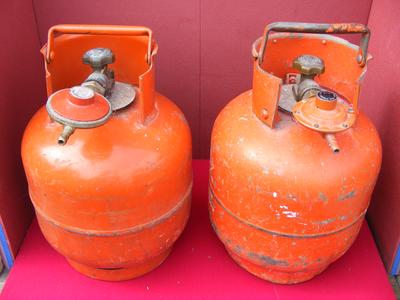 H&S They are both heavier than air so should not be used nor stored underground, nor stored near drains and cellars --

Where to buy gas

Harrymann: You might be told that Camping Gaz (small blue bottles) are readily sold in almost very French High Street...

Well they might have been but they're not now... and if they are the price will vray incredibly! From Euro 19.54 for a refill exchange 2.5 kg in French provincial towm to Euro 24 for a complete new 4.5 kg tall bottle in Andorran campsite

Does anyone use 7kg calor gas bottles - I saw these and wondered about the pros and cons of them versus 4.5kg bottles?

Butane and Propane are both heavier than air so should not be used nor stored underground, or stored near drains and cellars

A point that is worth making is that although most UK gas appliances are made to operate with Butane @28mb or Propane @37mb they will operate safely at either 37mb Butane or 28mb Propane. It is not recommended that this be done for extended periods, but it’s useful to know in an emergency. With a cooker the only concern is that the simmer levels on the hotplate may be different.

By road - Gaz containers can safely be transported by car, but it is advisable to avoid leaving them in direct sunlight. However, the manufacturer states that since they do not explode below 87°C (That's nice to know, Ed!!), they would actually be safe in a car parked in sunshine, since cars do not get any hotter than 60°C.

By tunnel - Eurotunnel permits the transportation of Camping Gaz through the channel tunnel, although they do not permit vehicles fuelled by LPG.

jamesc76: I dont bother weighing mine any more as I have a Gaslow refillable bottle.

The best thing I have ever had - no need to worry - just nip to LPG garage and top it up!

We use the 6kg Calor propane bottle instead of the 4.5kg. Isn't easy to get into place, but it does fit!

If you kept the German regulator you can buy a small adapter that allows you to fit it onto UK Propane bottles. Available from Gaslow, called an Easyfit adapter (German Reg to UK Propane) part No 01-1674G its in the Gaslow catalogue for about 12 quid. http://www.motorcaravanning.co.uk/shopuk/gaslow_all_catalogue.htm That might help with the pressure. FYI, If you still have the beige or Grey German bottle, phone your local caravan place or Gaslow stockist place and ask nicely if they will refill it. Apparently some places will, it has 21.8LH fitting the same as Gaslow. Worth a shot !

An idea of calculation is given below calormarineshop website

For example, a Plastimo Neptune Hotplate burner has a heat input of 1.65kw, a grill burner 1.72kw and an oven 1.26kw. So if you were to use the oven and both hotplates for one hour a day then the sum would be:

For the ease of the calculation both Butane and Propane has 14kw per 1kg so: