Wiring a split charge relay is pretty simple, the theory is that as soon as the alternator starts charging the relay links the leisure battery with the main battery to charge both. When the engine is not running or is cranking the engine (important) then the two batteries are separated. This allows the leisure battery to be discharged while leaving the vehicle battery to start the engine. I have been asked why not just connect the relay to an ignition switched live (one which comes on with the key) and indeed I have done so in a Ford recovery van to charge a second battery for jump starting. The trouble is the T25 (T3) does not have an accessories position on it's key, the Ford did and this was disconnected when the engine was being cranked. If the leisure battery is not disconnected during cranking then a large load will be placed on the linking wires and the inline fuses will blow. 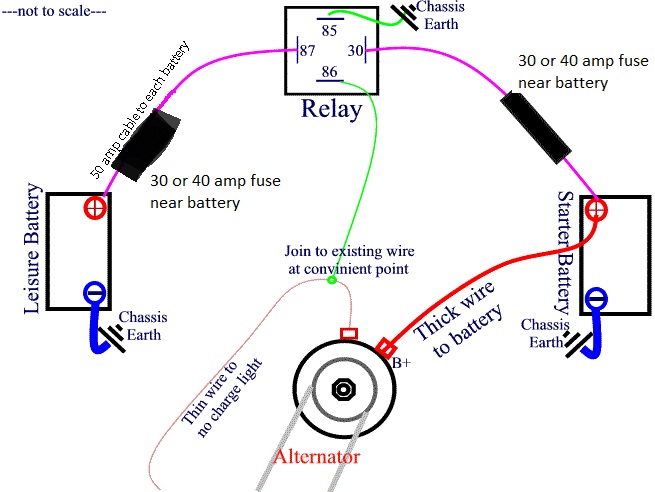 The numbers on the relay are standard and any accessory relay of the type sold for spotlights etc will do,however, one rated 40 amps or over is recommended. The fuse sizes should work fine (a bigger fuse will be OK but make sure the fuse is rated less than the wire), The 'thin wire to no charge light' on the T25 (T3) is blue and runs from the alternator, behind the fuse box to pin 11 on the multi-pin connector behind the dash. You can connect into it almost anywhere but I would recommend behind the fuse box if going for the front of the van as the multi-pin connector and the thick-film circuit it plugs into are quite delicate and best not disturbed if working OK. If you have a 12v fridge then it probably already has a relay wired like the one above and, if you can locate it, you can simply join to the wire feeding terminal 86 on that relay.

Recently added for anyone who has one of these smart/intelligent relays: 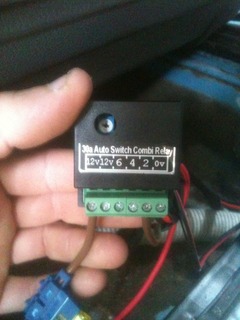 This type monitors the voltage at the starter battery and only activates when it rises above a set level (i.e. when the alternator is working (so the engine is running), the voltage rises and that triggers this relay, so it doesn't need the signal wire from the alternator, and shouldn't be using this wire for anything).

The terminals should be connected as follows:

The first two terminals are identical and bridged together so are basically ONE terminal:

Whichever is used to go to starter positive, you'll need a 30-40amp fuse on that line. You could then use the other as a spare feed from starter battery if you needed to power something direct from there.

[ Self-Switching_Combination_Relay £12 from towsure] will buy you a relay with some basic intelligence that will avoid an alternator connection for your split charger.

You can get, and I have one somewhere, a charging relay as used in caravan towbar fits. This black magic box takes 12v from any suitable place in the vehicle (big wires and appropriate fusing rcomended) and out puts 12v for battery charging when the engine is running without the need for it switching input from the alternator or the ignition.

I don't know how it works (that would be the magic bit) but I do know it does (I tested it). You might want to have a look next time your at the scrappys. Look for the giveaway twin plugs next to the towbar that marks out caravan tow cars.

The one I have is this:-

It shouldn't be that hard for me to spot as it's bright orange. I think it's 30a with 2 outputs that are only live with the engine running (fridge and battery) and one always on output (it's for running your lights and stuff from the car battery while parked up, daft eh?) £10, bargain?

You have to scroll down to find it - 3rd from bottom on right - labelled as: Split charge relay (ELSCR1)

California Dreamin: Just a word of warning when 'rating' your split charge components. Whilst a 30amp relay, voltage sensing or otherwise, might appear to work well initially, I have to question the 'long term' reliability given that I know, from personal experience, that a heavily discharged battery can draw mid 30's amps on initial start, dropping quickly after a few seconds but never the less, in excess of the rating of the components mentioned above. Therefore, the sensible recommendation would be 40amp as a minimum with fuses always rated lower than the weakest component.

It's also a 30A unit, still auto sensing, same outputs but tasteful black. £12.87 and a bit harder to find in the rear light cluster of a crash damaged Carlton due to it's stealth looks.

Covkid: Relays can be a bit of a mystery for anyone unfamiliar with electrics but actually, they're very simple. Basically, in vehicles relays are used where the current being switched on or off would put too much strain on a regular switch or wiring. In fact the solenoid on the starter is a big relay. Without it you'd need a giant buzz bar on the dash like something from a Frankenstein movie just to start the camper. Modern cars may have many such relays and when you add new accessories (say a powerful horn) you'll usually need a relay. Its all about current draw. In the case of split charging you're working directly with the batteries and switching power via heavy cables so a relay, rated for the job, is used to do this.

The diagram below shows what the relay does and how it all works. Basically the relay is two distinct parts - a small switch (86/85), switching a bigger one (30/87) but the two circuits are not electrically connected. Think of it as two toggle switches connected by a plastic bar. Switch one and it switches the other. Once 86/85 go live with voltage through blue trigger wire from the alternator, the switch at top pulls down, allowing power to flow through contacts 30/87 via heavy cable from alternator to leisure battery. Turn off engine and relay switch goes off, isolating leisure battery from charging circuit.

Second diagram is a 5 pin relay with the extra terminal - 87a. This circuit/terminal is only connected when the alternator is not charging - ie relay off. This can be handy and is often used to connect something like a small trickle charge solar panel to top up the battery on sunny days. When the engine is started and relay switches in, that contact is lost and solar panel disconnected. Switch off engine and solar panel is connected again. You may find other uses for such a contact - say an extra dash light to show relay kicking in or out. If you want more information about the state of the leisure battery, you could fit a simple and inexpensive LCD voltage meter which I penned some time ago: http://wiki.club8090.co.uk/index.php/VW_Electrics_tracing_battery_discharging_cause

There are all kinds of relays used for all kinds of applications from huge ones to small components in electronic equipment but essentially this is what a relay does. Other relays may not have same terminal numbers and may be rated for different applications. Higher rated relays have better contacts for the main 30/87 side to switch even heavier current. Certainly you can get auto relays up to 100amps and beyond. My own relay is rated at 80amps but to be honest a 40amp relay would be enough.

If you're in any doubt as to whether a relay even works or not, assuming its removed from vehicle, you can find out whether terminals 30 and 87 are able to pass battery charging current by applying 12v to terminal 86 and earthing 85 to the chassis (it should click). Then put an ohms meter across 30 and 87. Try it with the 12v off and on and the 30 and 87 should make or break the circuit. Basically charging only occurs when voltage is available via 86/85. I've used relays with different terminal numbers by working them out in this fashion - some japanese ones are simply labelled 1-4.

In normal use the relay will click in when the engine is running and the ignition light goes out but if you're not sure, with engine running, carefully disconnect earth wire (85) on relay and you should feel the relay click off. If it doesn't, the earth is either poor, the small blue trigger wire (86) from alternator disconnected somewhere (they generally work best direct from alternator I find) or the alternator faulty. A failing brush/diode pack in the alternator could also cause the trigger wire to not generate the voltage needed to energise the relay. Look in those areas and rule out each.

Headlamp relays? They use the original power cable that goes to bulb to energise 86/85 instead whilst a new heavier gauge wire is used for headlight via 30/87. That means the headlight switch no longer carries heavy current with potential for burnt contacts and headlights get a much better route to the power source. Anyone that does not have the relay upgrade on their own camper should consider it. The T25 is notorious for a voltage drop on headlamps and even without fitting better bulbs, the relays transform the output of even standard headlights. See http://wiki.club8090.co.uk/index.php/VW_Electrics_Upgrading_headlights

To wire a 12volt fridge use exactly the same circuit but replace the leisure battery with the fridge in the diagram above and check the current drawn by the fridge for wire sizes and fuse ratings. The same 'sense' wire (the blue one) can operate both relays comfortably (mine has been like that for two years at time of writing).

Finally at all costs be safe, although 12v wont give you a shock the current produced by a battery will easily set fire to the wiring if allowed to 'short', make sure all connections are insulated, mount the relay on something solid and make all connections securly, in order of preferance solder, terminal strip or crimp, don't use scotchloks and always fit the fuses.

Tip for finding the "multi-pin connector"

The connector you want is plain white and sits up underneath the dash, close to the steering column and behind the clocks - nowhere near the fusebox. The connector is best found by turning oneself upside down with your head in the footwell and then looking up - it disconnects with a careful pull. The connector has some very small numbers on it - you need to find the blue wire from number 11 and join your relay to this You can test if you have the right wire by disconnecting the blue wire from terminal 11 and then seeing if the red 'no charge' light ( on the dash) still comes on when you first start the engine - with the correct blue wire disconnected the light shouldn't come on at all. Just make sure that you reconnect the wire back into number 11 when you've finished or you'll spend hours wondering why the no charge light has stopped working - don't ask me how I know this!.

To prevent permanent damage, the minimum voltage you should ever let your battery fall to is 11.5 Volts. It is all too easy to fall asleep leaving a bit of equipment on (TV, Laptop, Propex etc) and if this flattens the battery you have done it serious harm and it will never hold as good a charge again. Do it a couple of times and you're then looking at buying a new battery. You can buy a thing called an "LVD" (Low Voltage Disconnect) that automatically disconnects your leisure battery should the voltage fall too low. They can usually be bought from Ebay for not much money, like these = http://www.ebay.co.uk/sch/i.html?_from=R40&_sacat=0&_nkw=12V%20%20LOW%20VOLTAGE%20DISCONNECT&rt=nc&LH_PrefLoc=1&_trksid=p2045573.m1684