This article penned by Covkid, explains where the water comes from and the unseen damage occuring underneath windscreen seal. Its worth noting that if left, the rot will ultimately undermine the strength of the 'A' pillars as well as nurturing further rot to front floors due to wet mats etc. With really bad case you can get squelchy carpets, steamed up windows and cold feet. 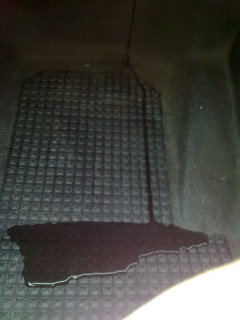 Generally, the first sign of trouble with a leaking windscreen is this puddle (above) either appearing on top or underneath from mats/carpets. Other tell-tale signs are rust along your dash where it meets windscreen. This evidence is not always there but they ALL rot here and unless screen has been out recently, I can guarantee you'll find rot in the bottom corners.

I spent a very long time indeed (2 years) trying to work out exactly how water was getting in. I tried silicon (aquatic) sealant in corners, tried sealing between rubber and glass along whole bottom edge, and still water came in if it had been stood out in the rain. Invariably its the moment you pull off the next day that it trickles down and often ends up on your foot. However, it can run (undetected) beneath carpets too. Whats happening is the seal is effectively doing the absolute opposite of what its meant to do and actually pulling water in by capillary action to where you don't want it - inside! Not only that you have hidden rusty lakes in each corner of the bottom of your screen that you can't see and are rapidly easting away at your van.

Well, simply pumping the area with silicon sealant doesn't work (not for long) and won't stop the rust. You can maybe stop the water ingress with roofing mastic in a tube (don't use silicon) but it will be barely temporary and given the importance of strength up front, it is better to deal with this sooner rather than later. The longer you leave it, the more expensive the job becomes. Essentially you need a mig welder, a new windscreen seal, some suitable sheet steel offcuts and relevant paints.

Contrary to popular belief, water doesn't force its way into the corners but through any hairline breaks in the seal from further up the windscreen (normally the very top). It works its way under the seal and runs, completely unseen and down into the corners where it has nowhere to go whatsoever until it finally rots the metal (see photo below) and has a route to the inside. If you get several days of rain, it will really build up in there, trickling down on to cab floor. In some cases it goes under carpets so you don't always see it.

You can verify this. If it rains overnight, wipe down A pillars so they're dry. Then carefully lift seal with a knife (vertical part on pillars) and see if its wet under there....

Now, in an ideal world, we'd like to think that with the windscreen removed everything is rosey and it looks just like this: 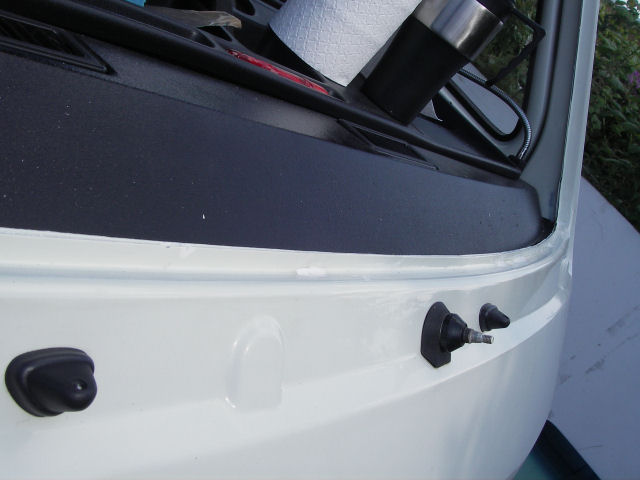 VW decided not to use any windscreen sealant, relying solely on the rubber to shrug off the weather like the earlier v-dubs. OK in California and it worked fine for a few years even here in wet and windy Britain. Unfortunately, if the windscreen has not been out since the vehicle was made, time has already taken its toll with the rubber no longer providing a seal and it has been letting in water at the top without your knowledge for some years. Worse, it doesn't show until things are much worse. With the screen out, it will now look more like this at the bottom: 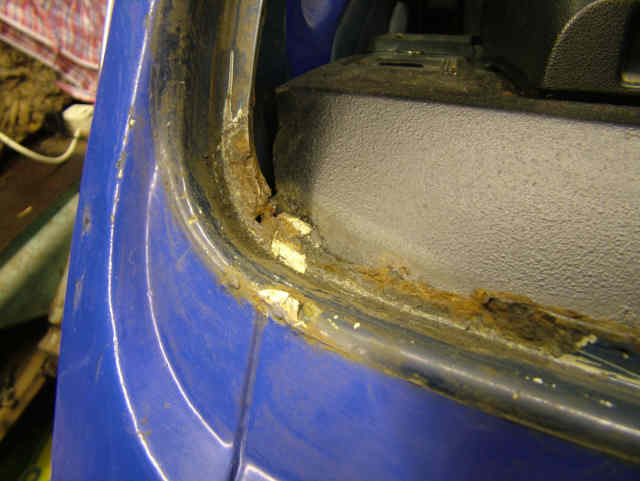 Firstly, you need to remove windscreen and rubber. You won't solve this with sealant. Its got to come out! This is easily accomplished by cutting out old rubber (carefully) with a stanley knife - you WILL be fitting a new rubber, won't you:)

Ideally, its better to do this job with the dash out, but on the basis that may scare some readers to death, this is how I attacked the job with dash still in. However, you MUST make some efforts to protect and reduce the chance of fire and interior damage from sparks. Hot sparks from a grinder or welder WILL embed themselves in synthetic materials and burn stuff including plastic mouldings and seats so protect the interior with boards or metal sheets to stop hot metal from entering the interior or even causing a fire. The corners of the windscreen are directly above the footwells too so pull back or remove carpet and ideally have an assistant to keep an eye on interior and move sheilds to suit. I strongly recommend you remove both front seats if you want to keep them as they are. Disconnect battery.

The photo sequence below maps the processes involved, but understand that some vehicles will have a greater or lesser degree of damage so you may not complete this in one day. Be realistic. It all depends on how much patching/repairing is required. I had to rework some areas on the horizontal/flat plane as the steel was thin in places so patch in sections or else build up with weld then ground flat. Take all the time you need to rework the lip. Its easy to blow holes in some areas, but you can soon rebuild affected areas until the strength is restored.

I used thicker steel when butting in new pieces simply because the lip is a seam and therefore double thickness. Those areas that only had marginal corrosion were simply ground down as much as was needed to actually reach shiney steel and then built up bit by bit with weld then ground back again to achieve desired depth and thickness. The trouble with weld is that its always harder than mild steel so takes an age to get flat again, but certainly a stronger piece of metal in those corners now and almost as good as new.

Once screen was back in - and I did this single handed using nylon platted washing line from local pound shop (about 1/4" thick and perfect for the job). I also ran a bead of cheap gutter sealant under the rubber lip them wiped off excess with white spirit - had VW done something similar, we wouldn't be here now. 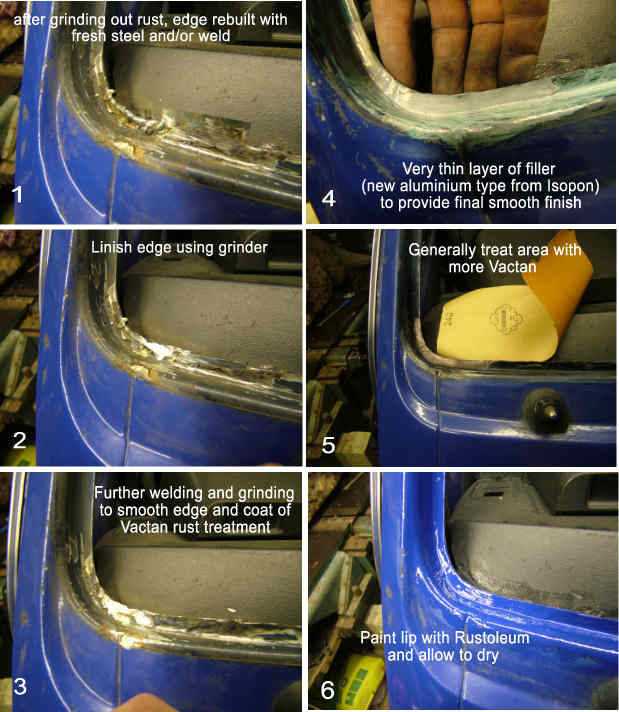 Anyway, it is now fixed and absolutely watertight. I strongly recommend you source a genuine VW seal if you can get one as they fit AND look better (see photo below) - VW Emporium do them. They may cost a little more but they are massively different to cheap seals and lay flat - they go in easy too. Remember, you'll only be doing this job once (hopefully) so if the seal costs £20 more, so what. It makes no sense to fit a cheap copy on a repair like this. The white van further down this page will give you a better idea of what a copy looks like. Its not pretty - nor was it easy to fit. It took two big blokes and a lot of cussing. 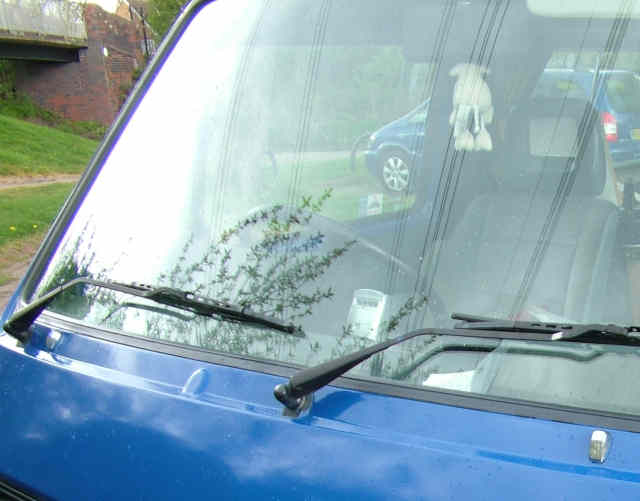 This was the state of Chickenkoop's camper once windscreen had been removed. In this instance the metal had so many holes we had to cut new pieces shaped to fit and then linish smooth (ish). We did however remove the old screen and rubber, repair, paint hidden areas and fit new screen and rubber in about four hours. 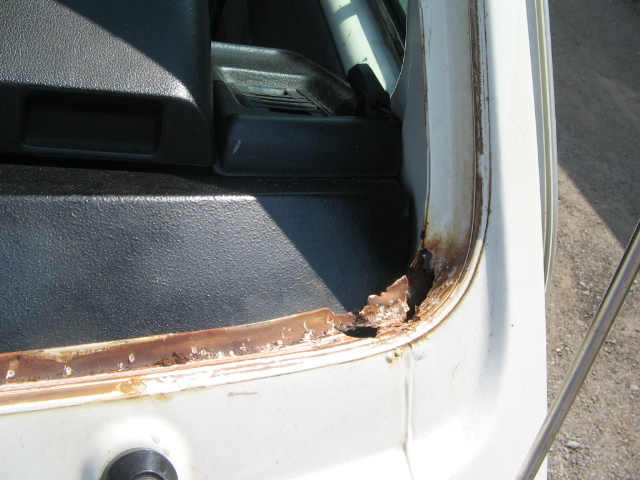 Photo below illustrates very well how much we had to build up the corner. Once welded (photo), it took some considerable time to grind back to shape and paint. 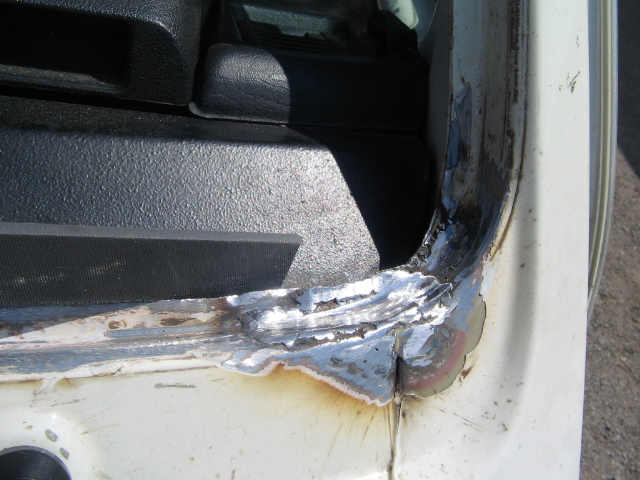 Covkid helps the new screen and rubber bed in with very light taps with a rubber mallet along seal line, (you can use the flat of your hand but this can hurt after a while) as Chickenkoop pulls the blue cord from inside vehicle. Gowesty have subsequently posted a video on screen removal and replacement which you may find useful: https://www.youtube.com/watch?v=sLn_wuu1LnQ 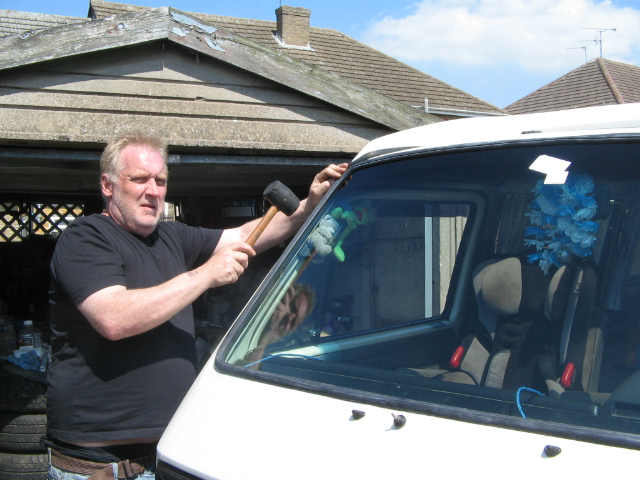 New screen and rubber fitted and job done. Chickenkoop and I did note that the quality of JK rubbers was not as good as genuine VW ones nor did the JK one fit right. 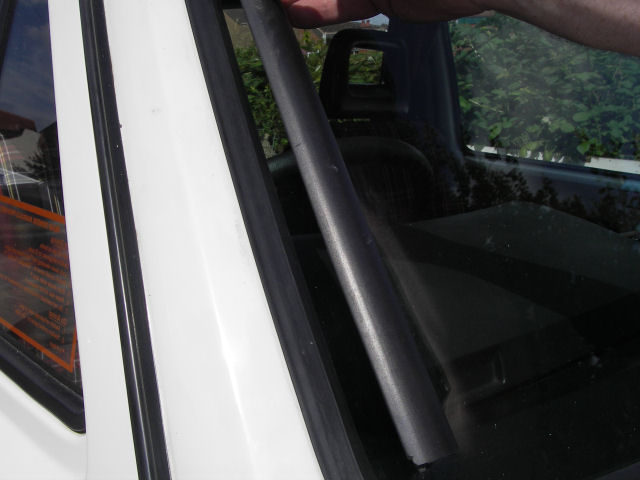 The above pic shows 1664's camper with a new OE seal fitted and on the right (for comparison) a short section of the JK seal he had fitted previously. The JK version bulges out like a bay seal - as if it has bad thyroid problems. It is also much harder to fit needing some kind of lubricant, beefy blokes and granny to make tea and send a strongly worded letter to JK. Some have also reported leaks after fitting them. If you're really not bothered about the look and like to faff around pointlessly for four hours, buy the cheaper copy. 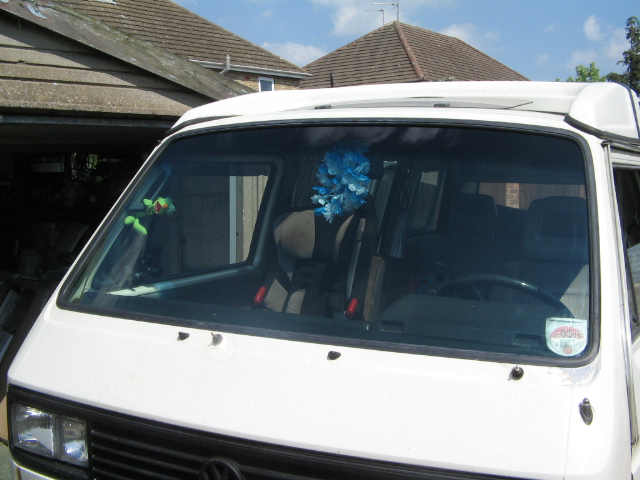 It will now be left for a week to 'settle' (rubber trends to shift a bit as it gets used to being run into corners) and we'll apply black B&Q roofing sealant under the edge. It stays soft in areas not exposed to air and comes in gun cartridge format for about £3. With the nozzle snipped to create a small bead, you slip this under the rubber lip and apply all the way round. Any excess is easily removed with white spirit.