The other thing to note on these type of locks is that the little springs that live inside the lock barrel can become gummed up as the grease inside hardens up and gums up with little fragments of the brass keyways over time.

Its easy enough to do, remove the handle and lock assy, put the key in the chamber, as normal, and then remove the bits at the back of the barrel so that the barrel itself, complete with key still inside, can come out. Keep your fingers on the little brass keyways and DONT pull the key out - otherwise you risk the lot pinging out everywhere and then the fun starts trying to work out where the respective keyways go

Run a little 3-1 oil onto the tops of the key ways and gently begin, while holding everything still, as above, to ease the key in and out and then gently let your fingers ease pressure to see if the keyways can move or not. if they dont then the lock cant do its job so you need to keep dripping some oil in until they move up and down as you put the key in and out.

Basically the keyways go down with the key in, and out - and into the lock chamber so as to hold it in the lock position - Once thats workings fine, reasemble and try it for size, you should be ok now

You can further secure the sliding door(s) of your van by drilling a small hole in the top runner behind where the runner is in the closed position. Then use a good quality padlock and lock the hole. This will stop the runner sliding back if the lock is forced!

CovKid: Locks can and do fail, but cold weather seems to play a big part too.

Sliding doors can be a real problem if the temperature drops. For instance, if its freezing outside, if I open my slider it will NOT catch when I come to shut it. This can happen even with minor temperature drops but the winter is when its most likely to happen.

The freezing cold grease/oil on the rear mechanism adds a braking effect to the movement of the latch so a normal 'slide and shut' doesn't work. The catch is effectively springing back too slowly. If however I close it slowly on the last inch or so, it will shut fine simply because I'm allowing it more time to catch up. Come the summer this annoyance will vanish altogether. I had a MIDI van some years ago and I had the same problem on that. The problem can occur anywhere where theres movement, front or back.

I'm only mentioning this because some owners may go in search of replacement catches for what is a much simpler problem. Ideally it needs a lubricant somewhere between grease and oil, chain lube probably. The ideal may be 'white' food grease used in the food processing industry which seems marginally less 'stiffer' than high melting point grease. Cleaning the mechanism and oiling or re-greasing will often solve this and no doubt affects other locks too.

Keys can be cut to an N number which can be found on the inside of the door handle mechanism this can be accessed by removing the handle, there is a screw behind the rubber of the door seal. 80-90 members can get the keys cut by member Dansimpson, but any good locksmiths should be able to offer this service. Bear in mind if your locks have been replaced the barrel will need to be re-keyed to the same number for the same key to work in all the locks. Lock sets do come up from time to time but ensure the locks not only turn with the one key but also dont open say a screwdriver indicating that the barrel has been scored with use and is effectivly scrap although you may be able to repair with some liquid metal or similar. 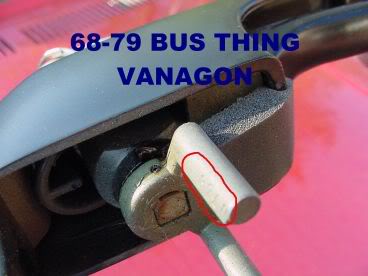