by mbcamper
I've now owned my Autosleeper for about 3 weeks and it's time to start doing something about the "minor" rust problem I have here and there!

I thought I'd post updates and photographs on my progress as I've found similar posts really informative. I'm also hoping to get some guidance in case the "minor" rust turns out to be more exciting! I'm fully expecting to find some nasties

Anyway I've not started much yet, but I thought I'd start by posting a few pictures of the starting point, which when you stand back looks as good as new!

But upon closer inspection you will see why I'm keen to do some work on it. This is not great at the back: 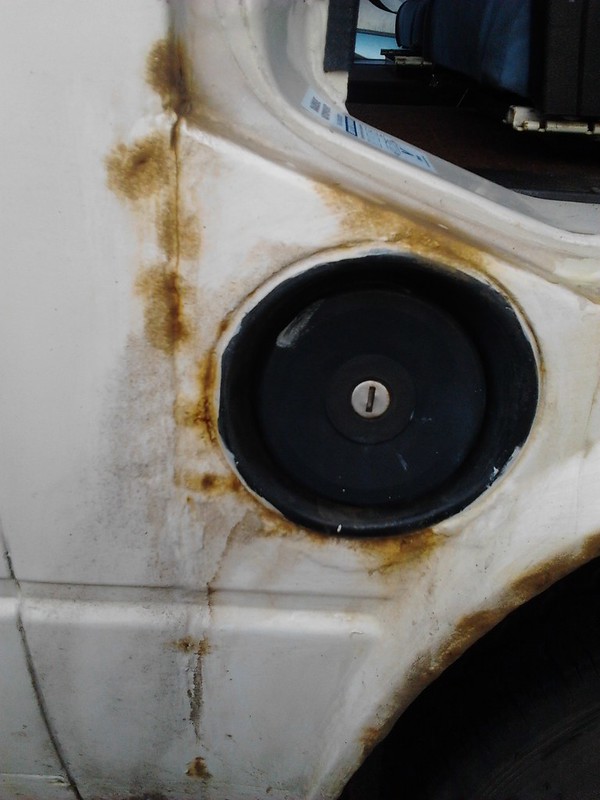 There is a fridge behind this: 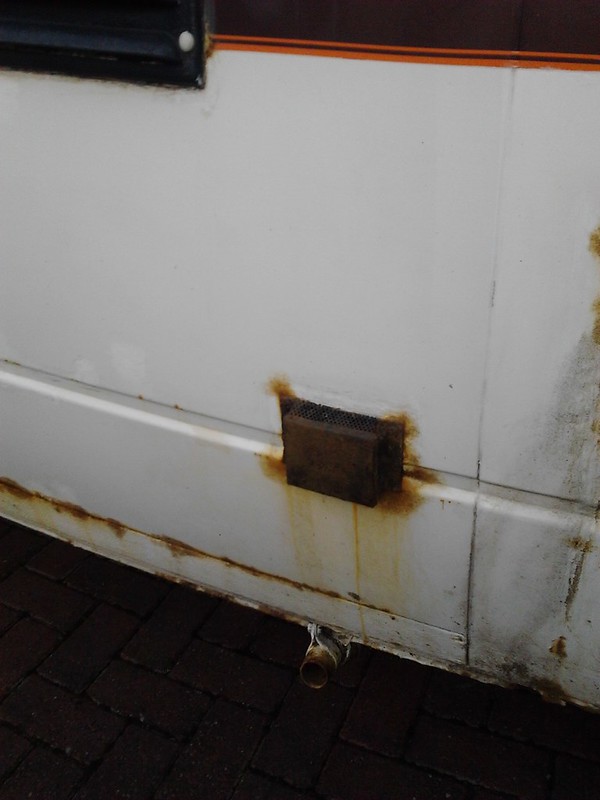 Seam rust in the sills?

Wheel arch off side: 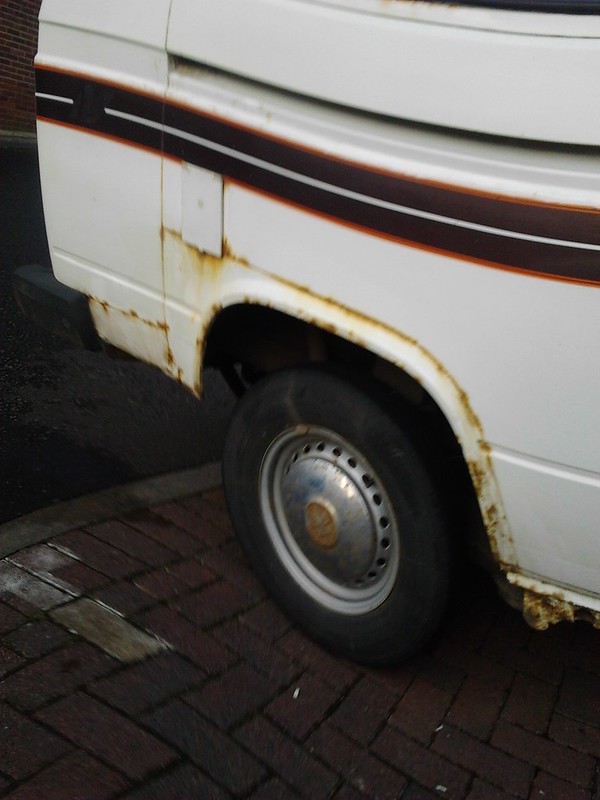 Solid as a rock at the front, but these bumps look like they should be investigated. 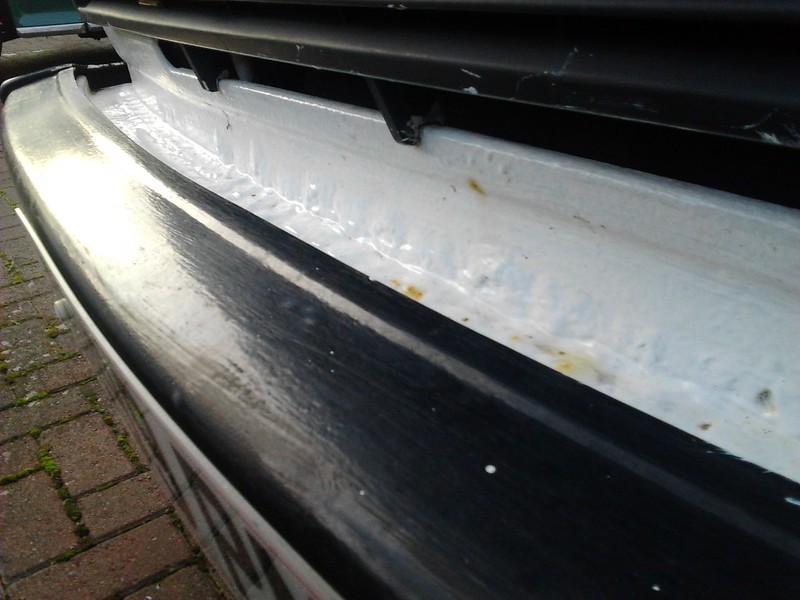 More rust on the other side, but not as bad: 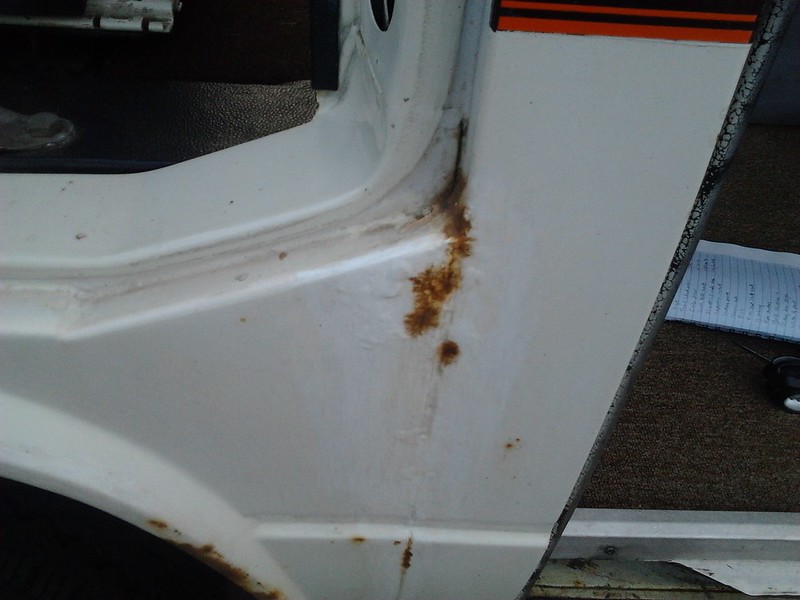 Windows might need to come out to sort this sort of thing:

This mess could represent the most alarming bit of restoration as I'm going to need to remove the roof to fix it (MM already helped me with advice on this point). I'm finding that the foot-wells fill with water after rain.

So I'll probably start at the bottom and work up. If possible I'd like to keep the van as a rolling restoration, but past experience has shown this impossible for periods of time! Anyway out with the angle grinder...

by 300CE
Good luck with it mb, post up loads of pics of your progression.

by eiret25
Best of luck with it.

by Funbus
Start at the top and work down. That's what the rain will do to your new bottom half.
That's what I would do anyway. Good luck.

by mbcamper
I've an initial investigation of the off-side of the van which looks the worst.

It's been attachek with my angle grinder with a wire brush attachment. Followed hand wire brushing in the seams.

I started with the fuel filler area and found that it's not as bad as some I've seen on the forum. I cleaned up quite well. I need to remove the fuel filler neck surround, but initial investigations show it's not too bad. I've vactaned it for the moment: Moving back along the sill, I cleaned up the seam raking out seam sealer and cleaning it with a small wire brush to get far into the seam. Again it cleaned up well: Moving to the rear wheel arch I've got some minor welding to do here. The very bottom fell off in a cloud of filler when I attacked it! And then going round the rear of the arch the next seam back from this is going to need a repair. I've vactaned it temporarily So a couple of questions:

- I've not welded such a modern vehicle before (I last worked on a 1958 Rover P4), so do I need to remove/disconnect any electrics before I Mig weld anything?

- I'm keen not to leave the seams I've cleaned up open to the elements for too long. What is a good seam sealer to use? Is this stuff what I should be using?

by Dazco
Disconnect your battery/s . Looks like you're gonna have some fun there

by Plasticman
do NOT add any sealers to the seams at this stage, vactan will be sufficient/best for now, sealants only go in later and for different reasons,i can advise you when the time comkes

by mrbodly
Good luck, I too shall be following this with interest.

I've got areas I need to tackle on my van, the drivers floor and lower panel behind fridge being the worst. New to bodywork but have got hold of a mig welder, just need to practice on some scrap.

by mbcamper
Thanks for replies. Battery will be disconnected for welding and I'll hold back on the seam sealer for the moment.

I am however tempted to put a coat of Rustoleum over the areas I've finished with for extra protection as the van is kept outside. I'm planning on following the "Paint you van for £50 with a roller" instructions but I'm a long way off that.

by Plasticman
Rusto over the repaires stuff is fine,lets have some pickies of what your doing /making
mm

by mbcamper
I don't make very quick progress, but I'm getting to the swing of it starting with the offside rear scraggy wheel arch: Now I'm afraid that I'm not an expert an sheet metalwork so I'm limited to straight bends in the things I make. Wheel arches with curves in all directions are beyond me although I know it's possible to make repair sections out of a single strip of steel. So, I cheated by copying the profiles and welding the 2 bits of metal together to make a repair section. 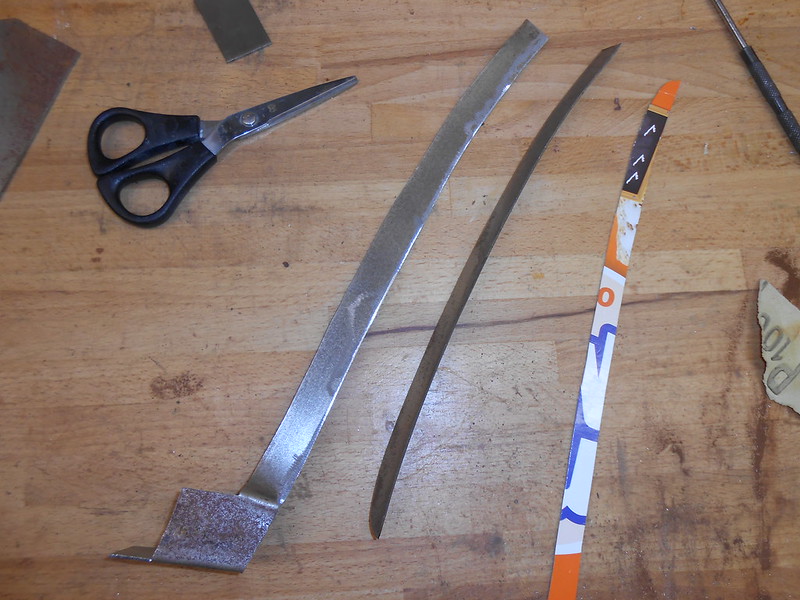 Working out where to trim things: 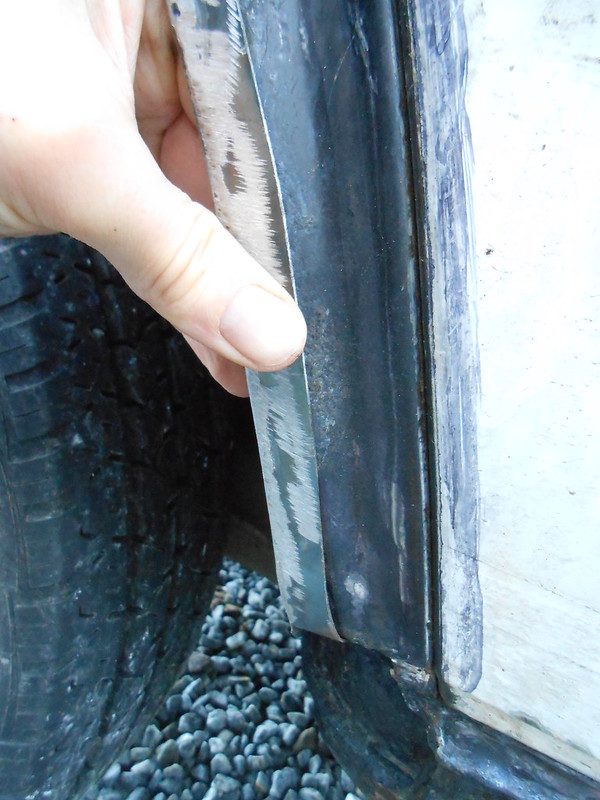 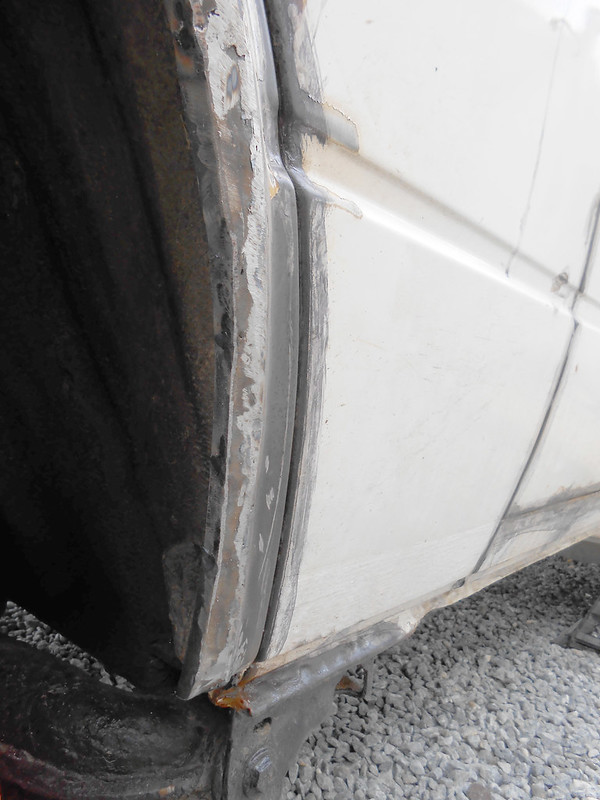 A bit more needs adding to the bottom to finish the repair. I've another smaller bit to repair on the other side of the arch, but that will be easy.

The next significant repair is this bit between the wheel arch and the bumper: It's only rotted about 1/2 way up the seam, so I guess the best approach is to make 2 repair sections so I can preserve the vertical seam line.

by mbcamper
"Only rotted about 1/2 way up the seam line"... hmmm investigating from the inside or the arch shows it's more of a mess. Basically is totally rotted all the way up the seam. I've decided to leave it for the moment and look back at a couple of other areas I started to look at:

Rivets! (is that normal?) Rivets drilled out to expose the rubber filler neck which wasn't joined to the plastic filler pipe with a jubilee clip! The fuel tank was replaced recently, but clearly they missed out a vital component And the plastic filler neck surround was a real challenge to remove as it was glued and painted in place. Consequentially was damaged badly during removal so I need a new one now. Anyway it revealed this: Angle grinder out and I've got the smallest ever repair section to weld in place: And an unexpected repair after stripping the paint back: I've scraped back the rubbery like rust proofing inside the wing to make sure the inside bit of the seam is good and it's in really good condition. Looks like I got in there before the tin worm started! Some welding for tomorrow...

Whilst I had the angle grinder out I thought I'd investigate this which I thought was something to do with the fridge. However it's a heater I think which appears to have a gas connection going to it. Anyway it fell apart when I tried to remove it: Okay the bodywork is fine, but does anyone know where I can get a replacement for the heater part? I've no idea about what the heater is on an Autosleeper. Can anyone advise me?

by mbcamper
Fuel filler area has had it's small patches welded in... should be good for a while I hope. At this point I was thinking I was getting away lightly on the rust!

I thought I'd have a quick run up the bottom of the sill with a wire brush on the angle grinder. There was some minor brown paint marks down there so I wanted to make sure. It really didn't look bad, but: Oh bother - that's where the rust was hiding!

The outer sill bottom where it joins the inner sill is a little thicker in places so this needs some more investigation. So what's the best to do here? I'm thinking to cut the bottom of the sill off to get all the rust out and maybe this:

It looks like it's a half sill repair section so I'd spot weld it at the bottom to the inner sill and weld along the sill (1mm gap) to join it back together.

Obviously I need to open up the hole to see what's going on inside, but would this be a fair repair?

Also does anyone know where I can get a replacement air intake for my Propex heater? The hole is the side of the van is 45mm

by mbcamper
Some parts are starting to look better and I've been removing most of the paint to make sure that there are no remaining nasty areas: The problem is that every time you have a little dig you find another repair: It didn't look that bad before I started, but as it looked a little bumpy I thought I'd investigate (I'm getting good at sniffing out rust). It had actually been repaired by a previous owner with fibre glass. Now I don't believe there is anything wrong with this kind of repair as long as it's done properly. However the repair was clearly applied over rust as a quick bodge.

I've therefore spent a chunk of this afternoon fabricating a better quality bodge: It's not how the original structure was made up, but it'll be better that what I had once it's welded in...

On another note I've decided to abandon my rear wheel arch repairs and just cut them out entirely to replace with new panels. It looks far easier than the fiddly patching I'd started on and the end results will look loads better.
All times are UTC
Page 1 of 6