Cobra88 wrote:I guess your a bit biased then paul

My speedshop exhaust is great and not broken

I'd have a speedshop one myself if it were not for oil coolers/warmers on my vans, no bias other than that.


Thanks for that - I searched but never found that post, no idea why, probably user error. .

For clarity, I assumed JK were selling the JP exhaust as it looks identical, hence included it in the list of suppliers.

It’s a long story and not for here, but I’d never buy anything from Just Kampers, and would whole heartedly encourage others not to as well!

Might have to wait to buy a speedshop one, just checked the front tyres of the wife’s daily driver and they look even more urgent. Bother.

by Sir Brixalot
Another vote for Speedshop. Great note. Bashed mine up and got a Longlife instead but it's much more raucous than the Speedshop

by T25Convert
Finally got round to ordering a new exhaust - a shiny VW Speedshop one: 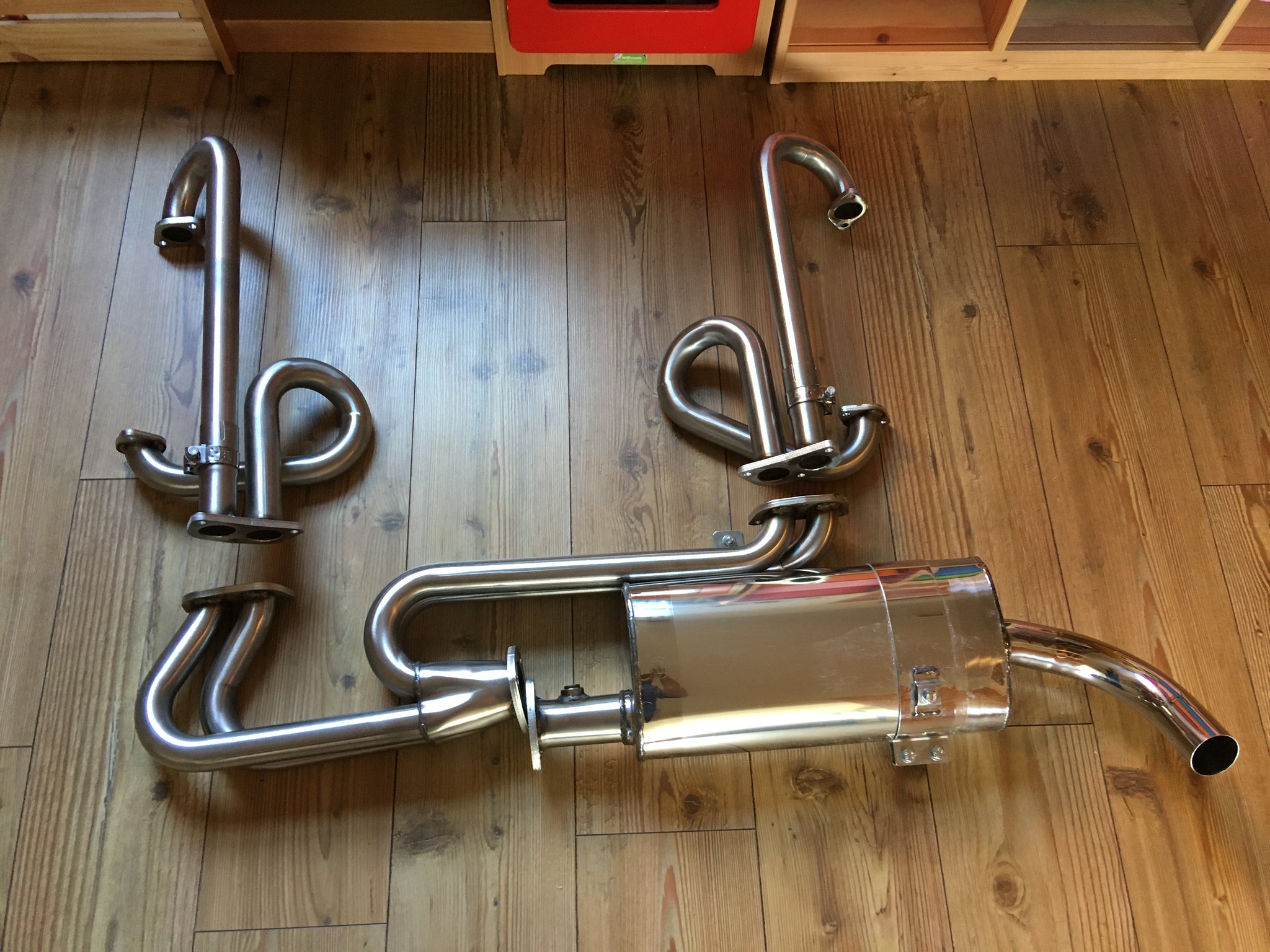 Yesterday was a sunny day, so thought I’d have a crack at fitting.

First relocate to dead end at the end of the road to avoid Covidiots coughing on me - today’s luxury workshop looks like this: 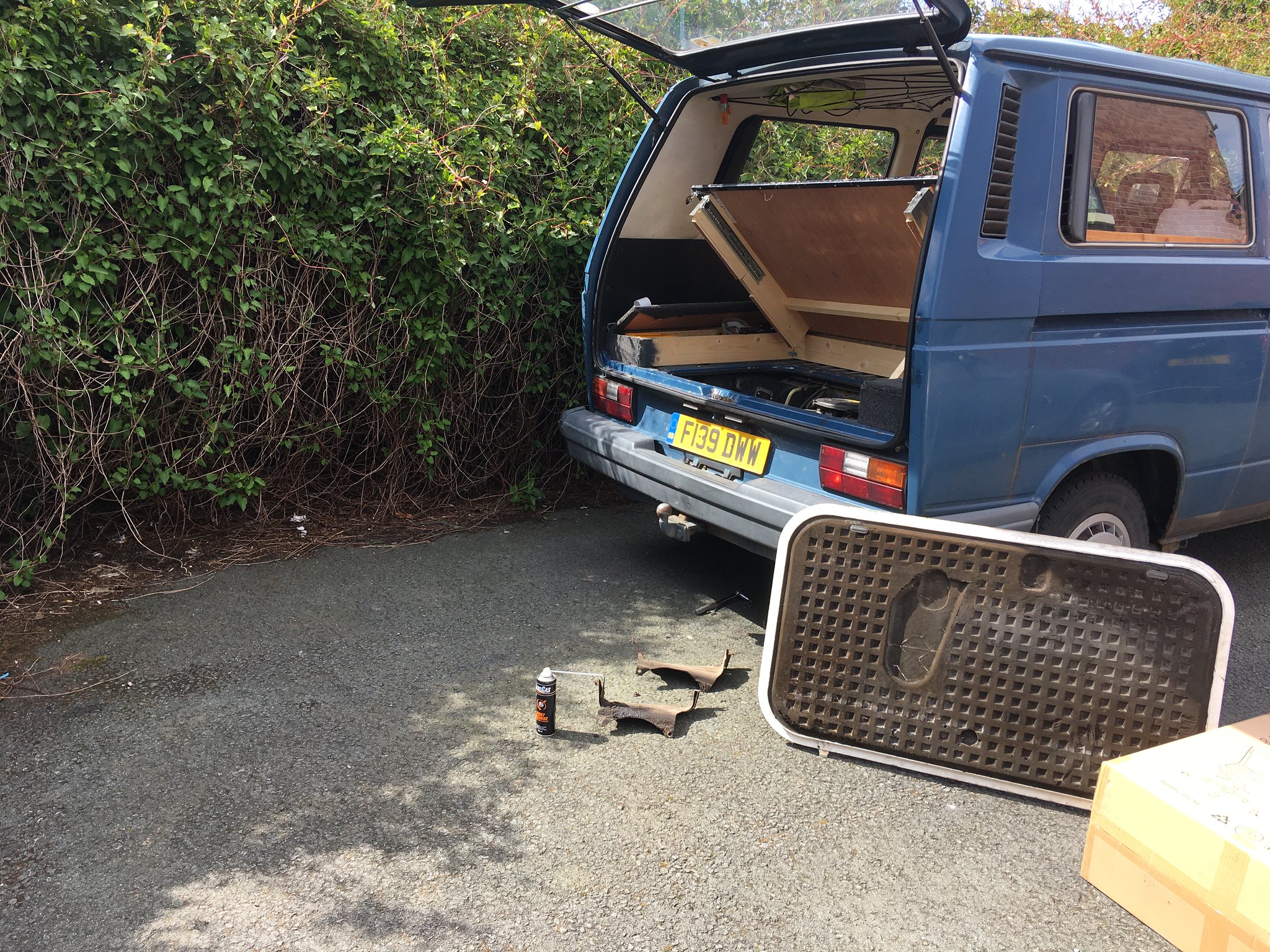 First 4 head nuts came off fine, no hassle, no drama. Number 5 needed my finest high precision spanner - this is from underneath looking up, so you can image the rusty pieces cascading into my eyes, and as I turned my head, my left ear. 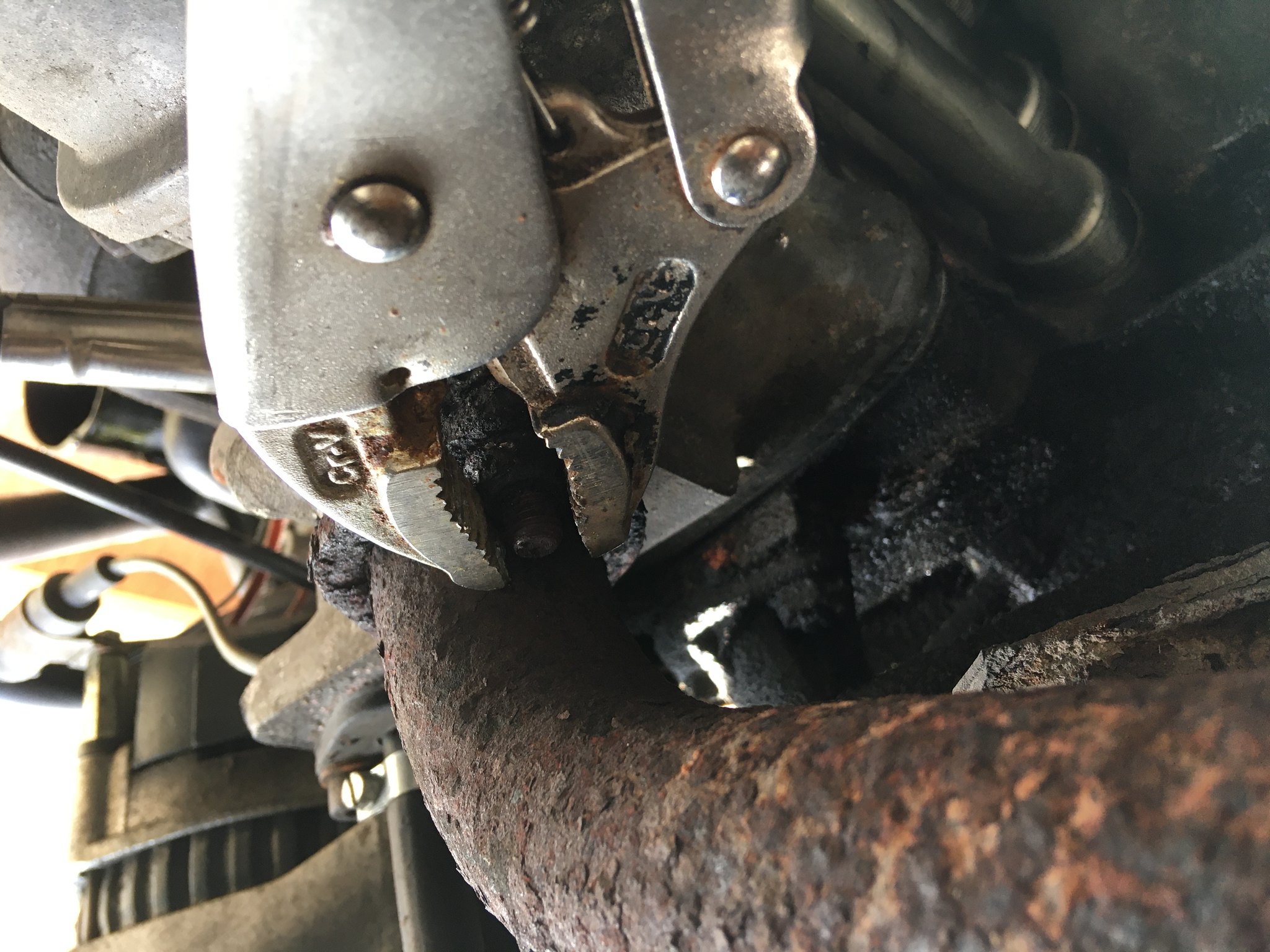 Nuts 6 and 7 both wound out the head studs, but cleanly.

Number 8 stud, the last, sits under the thermostat housing, and had been gently watered by a seepage on the bottom of the housing (fixed a while back). 13mm socket rounded instantly, 1/2inch 6 sided hammered on didn’t. Suddenly released, in a buttock clenching yielding fashion, but it was all okay.

so all I needed to do now was split the cast iron knuckle joint so I could withdraw the headers: 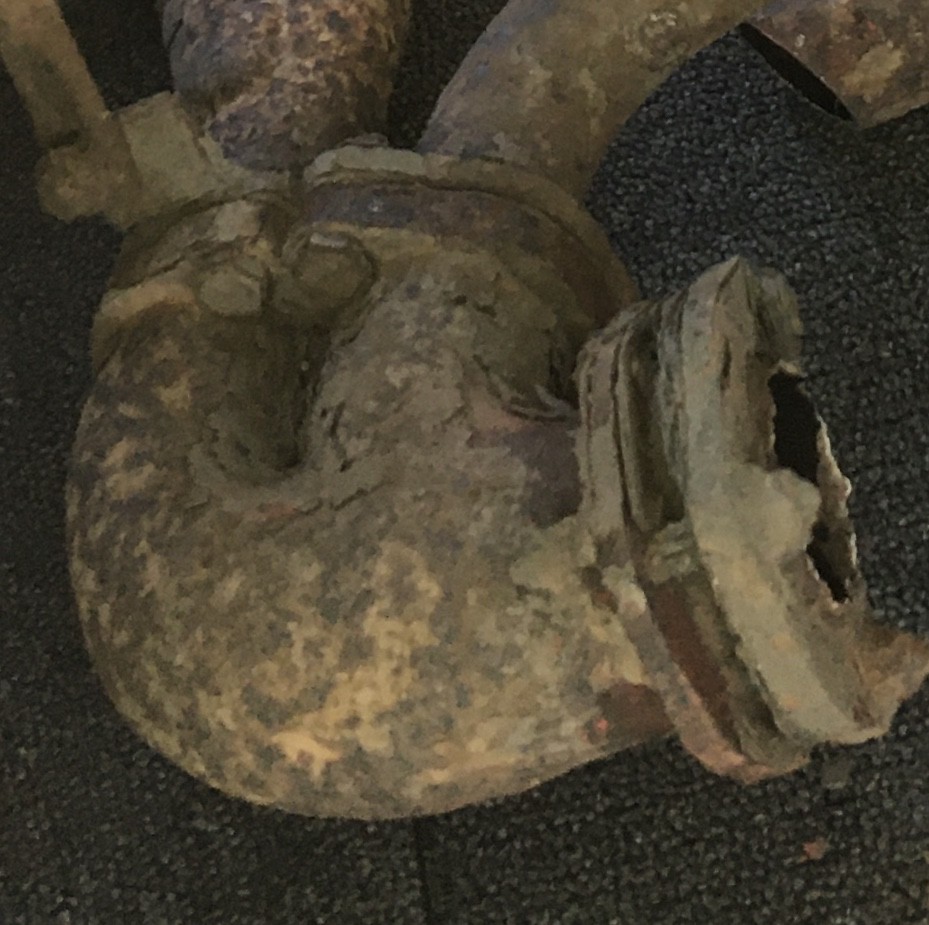 Not happening! So hacksaw out. Now much of the exhaust was paper thin, but the only bit I could get at with the saw was surprisingly solid: 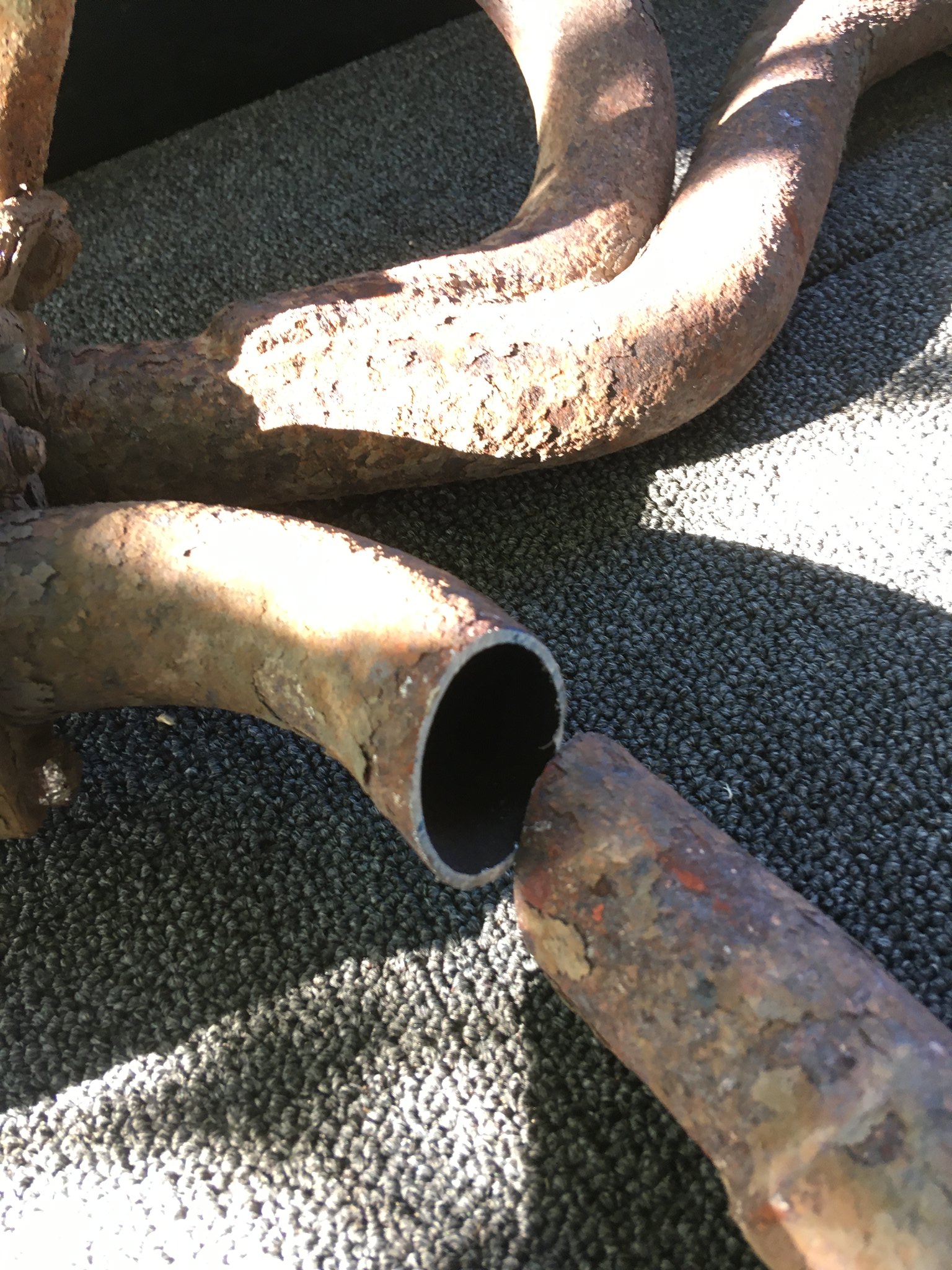 Got there in the end. It the n started raining coolant on my head, as I had managed to dislocate the main water pipe that comes of the water pump, which turned out to be barely bolted on, so just nipped it up and the pink shower stopped.

At this point the 5 local druggies turned up on the other side of the hedge to ‘get it cooking up quick’ (apparently) so i felt I needed to significantly increase my distance, social or otherwise. Moved down the street with open exhaust ports. It was loud, but I liked it!

Finally got to the good bit - putting shiny bits back: 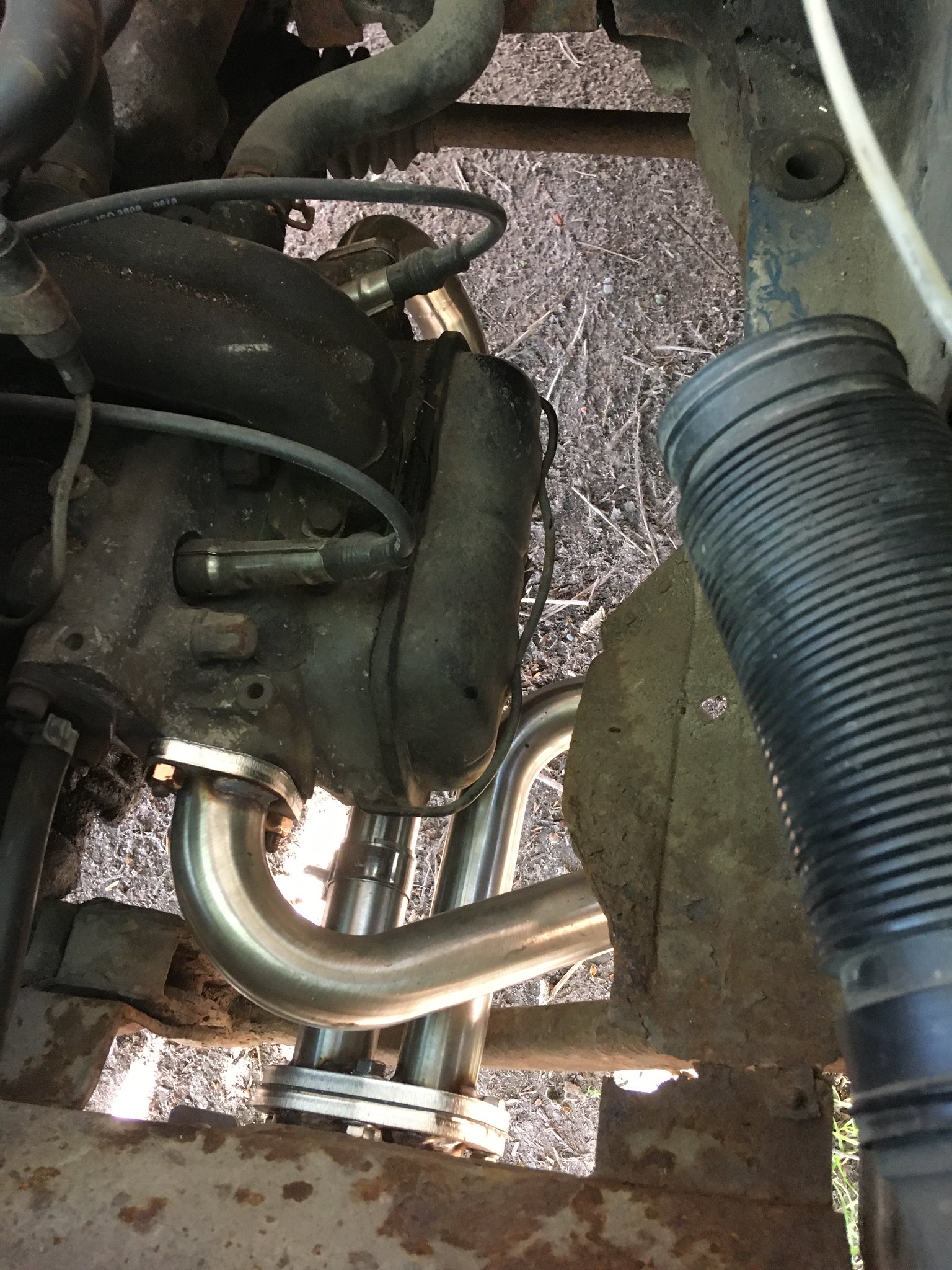 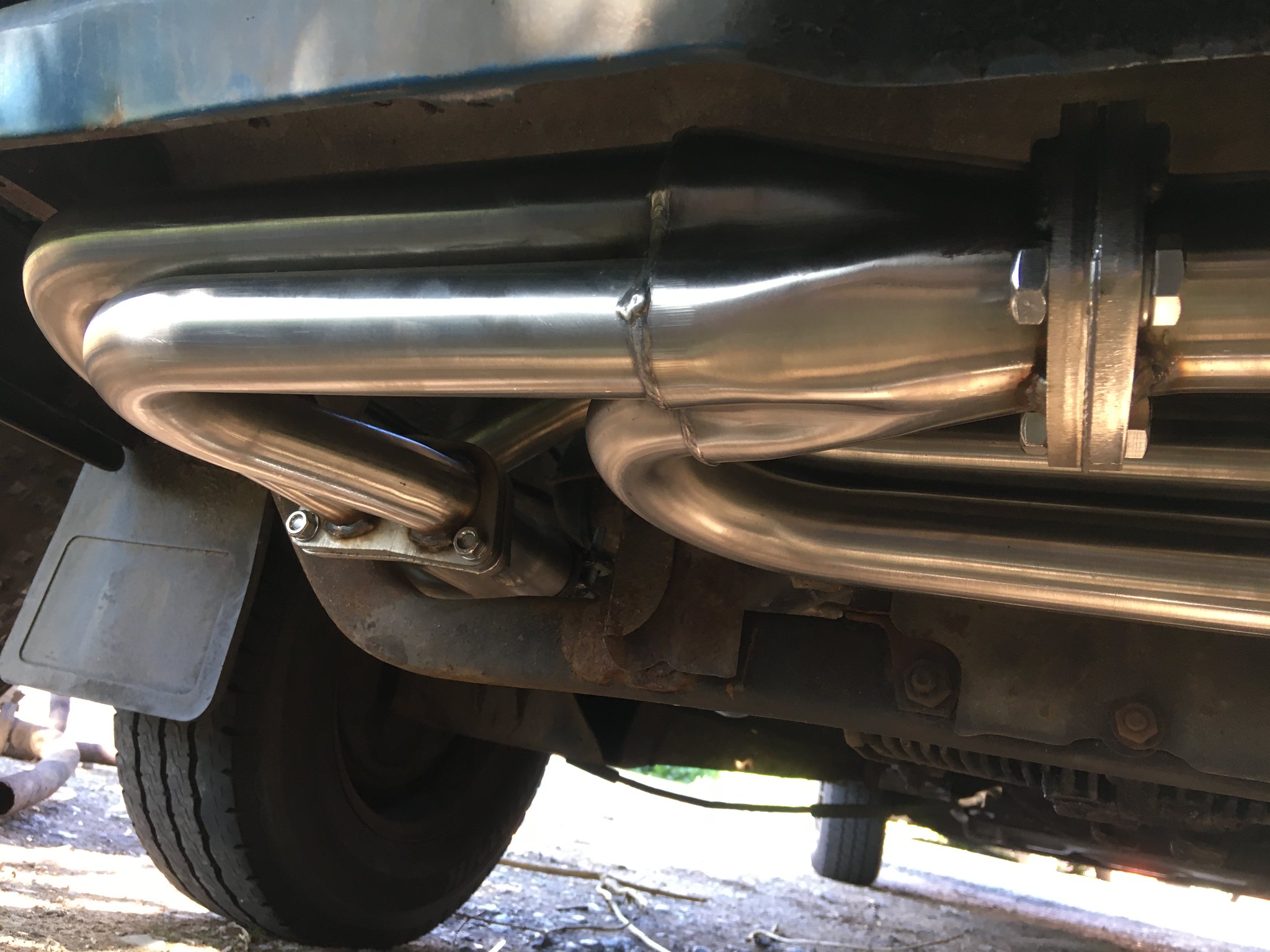 Complete with proper locking copper flashed nuts - a first for me but allegedly they will come off again in the future, but not by themselves whenever they fancy. We’ll see.

Final verdict on an ‘essential’ trip round the houses is it’s pretty quiet at idle, roars on power and cruises okay. Louder than I’d hoped, but better than I’d feared. It’s also very shiny, which does make the rest of the van look worse.Will let it cool down then tighten everything up again.

Generally very impressed with build quality and fit, only minor grumble is that the bolts provided to join it all up were all too short - the bolt only gets about 2-3 threads into the nut, which doesn't seem like enough, so will get some slightly longer stainless bolts on order.

by maxstu
In Paul's defence the Brickwerks version is interchangeable with mild steel parts. Well l think so.

You can run mild steel headers and just have a stainless link pipe and silencer for instance.
Also, all the joins are bolted together, and not slip fit with clamps like some systems. Far easier to rip down when or if needed.
All times are UTC
Page 2 of 2