Seasons greetings all can anyone help having problems with the heater not getting hot on my Vw t25 it had a new heather matrix before we got it we have changed the rad and the heater switch just blows cold air could it be the ram air flap if so does anyone know the part number going to bleed it again today any ideas what else this could be got to have heat in the camper the pipes to and from the matrix are hot .
Vw T25 1.9 TD Z1 hightop rusty but Less rusty than when I got it. lol:

if the matrix is hot (is the pipe above the flow control valve as hot as below when the valve is open, rather than just heat soak in both the pipes below the valve) then you should get heat on recirculated air even if the fresh air flap isn't working; it's possible that when the matrix was replaced the heater box wasn't reassembled correctly, or the flow valve is stuck and the control cable is just bending rather than opening it - early heater boxes only produce cold air at the outer vents I believe, but centre and windscreen vents should be hot
AIDAN

First thing is to check the heater cable is actually moving the heater valve, the heater pipes can still be hot even with heater in the closed position as Aiden says due to heat soak and flow up to the valve , pull the Lowe dash plastic off , you can see the 2 pipes running into the heater , are they hot there ?
Top

Ok I removed the lower heater cowling and the 2 rubber hoses Both get hot, the heater box itself gets hot as well.
The heater did work fine 2/3 weeks ago then when I turned the fan on full I Heard what sounded like a flap flip  No hot air Since then.
is there a flap to stop air going through the matrix? That I can get to/move without removing the dash for now.
i know I will have to remover the heater at some point to referb it as no foam on lower flap and this fell out See photo should be 4 of them and only 2 fitted.

I will have a look at the valve above the spare wheel to see if it moves as well. 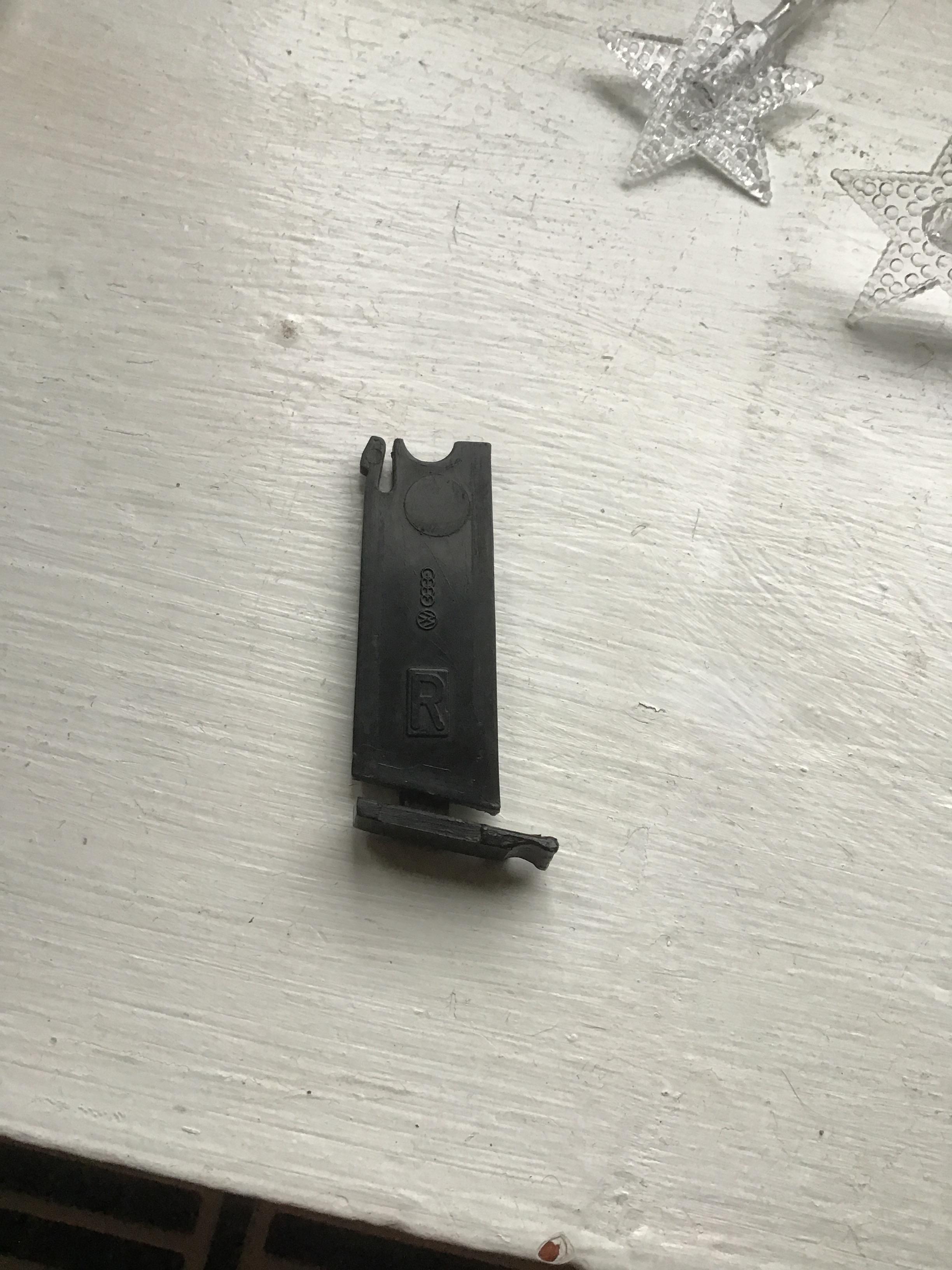 Sent from my SM-G955F using Tapatalk

The clip keeps popping out and it’s missing 2 clips, so need to Get holed of New ones.
ok I’ve had a look at the Heater valve and heater control it moves freely
as for the pipes either side of the heater valve I can’t really feel any difference in temperature between them I don’t know how hot they should feel.
thinking about it the vans temperature on the Gage barely movers may need bleedIng.
Vw T25 1.9 TD Z1 hightop rusty but Less rusty than when I got it. lol:

I dont no weather this is right but mine only blows hot air out of the top vent when I hold the revs up or go for a drive when on tick over it blows cold air out and Luke warm out of the bottom vent .
1985 RHD T25 hightop camper 1.9td 1Y engine
It's always easier with a friend
Top

i did my heater box recently and it took a while for mine to get hot for the first time of refitting, and i had to bleed it a few times, if you have the cover off the front, the one in front of the gearstick, you can stick your hand up through and feel the matrix on the inside to see if its getting warm, or feel the pipes feeding the matrix, after about 30 mins of running and bleeding i have heat and as i have refreshed  the foam strips it gets toasty inside my van a lot quicker than it did before. Also i ain't sure of the pipes to the heater matrix could be placed on wrong and the coolant running the wrong way round might have an effect

Update I’ve bleed the system 4 times did get a bit of air heating a bit better but still not hot as it should be and the temperature gauge still only just goes  Into the first white block so isn’t getting up to temperature to start the cooling fan.
question could my problem be the thermostat?
Vw T25 1.9 TD Z1 hightop rusty but Less rusty than when I got it. lol:

Yes.
I recommend you change the stat.

Ok will order one it comes with rubber seal is there any other gaskets needed and Where is the thermostat located On the waterpump?
thanks
Vw T25 1.9 TD Z1 hightop rusty but Less rusty than when I got it. lol:

T25boy71 wrote: ↑15 Dec 2020, 11:38 Ok will order one it comes with rubber seal is there any other gaskets needed and Where is the thermostat located On the waterpump?
thanks

It’s inside the water pump you have to take apart to get at it.
1985 RHD Pop Top Autosleeper, 1.7D KY Engine 4 Speed ALD Gearbox (Bertie)
Top

Is it using water is the big question and there is a good thread on the other forum re bleeding it off, works bang on

I've flushed it through,new waterpump, new 'stat, bled it till i bled tears, pulled the dash, flushed the matrix, rebuilt flap controls so  everything that's all the usual suspects

Was driving the other day and smelt rusty water if that makes sense so its got to be a head off as there's no leak, oil is fine and it will sometimes use water and other times not, nowhere else for it to go as the matrix is pressure tight

As a kid i used to fit Golf motors into beetles and we removed the stat and partially blocked the hose from pump to head, forcing the water round the system, worked a treat even in 40' heat! Very very nearly thought about doing this to my Doka but engine first then i will see
1989 Crewcab 1600TD JX
4 Speed
Top
Post Reply
13 posts • Page 1 of 1