I was shamed into more action at the weekend after Martin83's reply and another PM, so when the skies cleared on Saturday for a while I got stuck into the woven mat...

I thought that this would be the easy bit and despite warning from the GRP sales guy to the contrary I jumped right in.
This stuff should add extra strength to the build - it's got a kinda carbon fibre weave style thing going on - so the initial plan had been to use it running down the middle of the roof,from front to back, reinforcing the join in the centre, but only covering the middle 1m or so of the roof. However, the other point in its favour is that it leaves a smoother finish that the chopped strand - so as the top layer it should hopefully give a better finish to put the 'top coat' gel onto.
I decided that, in fact, with the hole now in place for the rooflight I had just about enough to do the full width of the roof in three strips. That was where things didn't go quite to plan

Turns out that the weave is quite easily pulled apart if you're laying it up on your own. Not enough to tear or leave large gaps, but enough to 'stretch' and possibly lose it's shape. Loose strands also tend to wrap themselves up and have left a couple of blemishes in the finish - much worse than the chopped strand underneath did. I think it's to do with the length of the individual strands. A bit like pulling out a long bit of thread from a piece of cloth cloth rather than leaving the 'pull' and say cutting it off.
Anyway, if I was using it again, I think I'd get help to lay it down and use it in as long lengths as I could rather than trying to join it seamlessly as it twists out of shape etc.

So, as long as I can sand back the blemishes, I think that's the top side finished. It's taken 3-4 layers of mat - thicker in the middle over the join, where I've hopefully created a bit of run off - and about 10kg of resin. The inside has one layer of chopped strand over any exposed board, two at the front and corners and two along the bottom edge. I've not gone over the ply frame generally, having read in another thread about problems with the GRP cracking unless they pilot drilled every single hole to attach the sides, struts and headlining. I'll probably paint or varnish the perimeter framework just for some added protection or to help it blend in, but it is tucked well up out of the way and so condensation would be my only concern in the long term.

Next step is back to the sanding and to get some pictures!
1982 2.0 Aircooled CI Autohomes Kamper
Top

Right, it's been far too long without any updates - or action to warrant an update! Family, birthdays, work, the distractions go on and on...

So, I left off with having put on the woven mat layer. This is a picture of what you're up against if it starts to 'shift'. The top surface is great, a nice and reasonably even/ smooth finish over the entire roof top, however, a few loose threads around the edges left me with a fair bit of trimming and sanding back. Then there were the feathery edges where these strands had come away to deal with too.

Still, seems plenty strong enough to support my 3yr old helper who was crawling all over it as soon as my back was turned... It was then suggested that since I was putting so much effort in to this new roof, I should make sure I did a 'really good job'. Not sure if that was a veiled threat that it had better not look as though it's been knocked up in the back garden - or a genuinely encouraging 'you've surpassed my expectations darling'

So with Euro Car Parts doing yet another sale, I picked up a 3.5kg tub of body filler for less than £20 to give the whole roof a light skim over and take up any imperfections still left and in case the self levelling gel coat isn't up to covering the worst areas of lay-up.
Last edited by TheDocmeister on 31 Jul 2017, 21:24, edited 2 times in total.
1982 2.0 Aircooled CI Autohomes Kamper
Top

So here's a shot of the end of play this evening. The thinest of skims over the worst areas - a good sand back should tell me if I need to do another coat anywhere... You might also notice the new MPK Vision Pro skylight that's sitting in place to check the hole I made for it is still big enough! Used a 15% off voucher from JK, so although still horrendously expensive it could've been worse! Double glazed, hinged from the front, clear to allow for star-gazing yet has a built in blackout blind and/ or insect net arrangement too.

I was intending to make new blackout curtains for the van as well, but my Mum beat me to it! Happy birthday to me...
However, when I'd been to the upholstery/ material shop place to check out curtain material, I also noticed a roll of this groovy stuff: It's a felt backed vinyl which should wipe clean. Probably a better idea for the headlining than the stretch carpet stuff I'd been thinking of if the kids'll be knocking about up there. It's the perfect width for the roof too - maybe two or three centimetres wider than I need. I just need to source some board to put under it now.

Finally, a shot of the roof caught in a heavy rain shower. Although the water's not running right off of it, neither is it forming lakes! You can just about see the slight (maybe too slight) bevel I built in too. Gelcoat is on!
Damn Photobucket and their $399 hosting fee

All went very well on the top of the roof. The top coat is certainly nicely self-leveling where you can let it lie and do it's job. Certainly smoothed out the woven finish and has left the edges looking great. The finish is quite 'plastic bath' to the touch, but not in a bad way.
The sides aren't so hot. Almost as if it's been done in Hammerite...

This morning I've sanded back the sides with some 40 grit and will give them another coat of top after a coffee! And things take a new twist...

I took the old roof off today and discovered at least one of the old side panels was rotten. On closer inspection they were all a bit scabby.

So, make or break time, I decided that if I'm this far in, with a nice new top well on its way, I may as well do the sides too!

The old solid folding sides seem to be a 10mm timber frame with 5mm hardboard facings, so 20mm in total. Outside with a thin aluminium covering, inside with some kind of vinyl. There's polystyrene in the middle. 25mm was the thinnest I could get the tissue faced Kingspan, so my thoughts switched to Kapa board - they make signs out of it, foam board with plastic facings - which I knew from work. I contacted our printers and they reckoned on £25 for an 8x4 board, but I'd have to get over to Edinburgh to pick it up.
Half an hour online got me on to a supplier of foam board a couple of miles away, so I dropped by and explained what I was after. They came up with two sheets of 10mm aluminium faced board that they had taking up room and that I could have, cut to size, for £40!

So another trip to B&Q for some 5.5mm exterior ply, cut to size, some 4mm stripwood, some contact adhesive and some bubble insulation gives me a head start this evening, before I collect the aluminium stuff tomorrow lunchtime. Down another £110, but probably worth doing now whilst everything is in bits. He says...

Still keeping an eye out for a viable alternative to Photophuket, but enjoying spending my time on the van more at the moment!
Links to the pictures...

After stripping the roof and all bits associated therewith from the van yesterday, I started stripping down the side panels to check I'd got it right construction and size-wise. Here's a shot of the lower side panel with the window removed. There's ply supports in there too, but I think it just about lets you see the hardboard/timber/hardboard layers. I then cut the 5.5mm exterior ply to shape, battened it out with 4mm pine and lined the voids with bubble foil. I also got on with insulating and boarding the top ready to fit the headliner and roof vent... State of play tonight is roof ready for headlining, but out of spray contact adhesive; two top side panels cut to shape, insulated and alu-board and frame glued and screwed together, clamped and drying overnight; lower side panels marked out ready to cut and battening cut to size. Just need to figure where I'll put the side windows. SHMBO says they must stay...

However, I'm not sure if towards the front is the best position - particularly now theres a bigger, tinted rather than opaque, roof vent right above them.
If star-gazing you can always pull the blackout blind before you drop off (head towards the front of the van), but the light's going to come in through those side windows too in the morning. If they were towards the rear you'd have the choice of which way round to sleep, morning light at your head or at your feet. Decisions, decisions!

And finally, one of the van showing the natty pyramid effect tarpaulin that's hopefully stopping the rain from pooling as I write!
http://i193.photobucket.com/albums/z249 ... 07E271.jpg
1982 2.0 Aircooled CI Autohomes Kamper
Top

Another long overdue update! It's amazing how life gets in the way just as you think your getting there...

Anyway, this evening I got both the driver's side side panels pretty much finished off and a good start on the edging of the nearside panels too. Now I 'just' have to figure out what order to put it all back together in!
1982 2.0 Aircooled CI Autohomes Kamper
Top 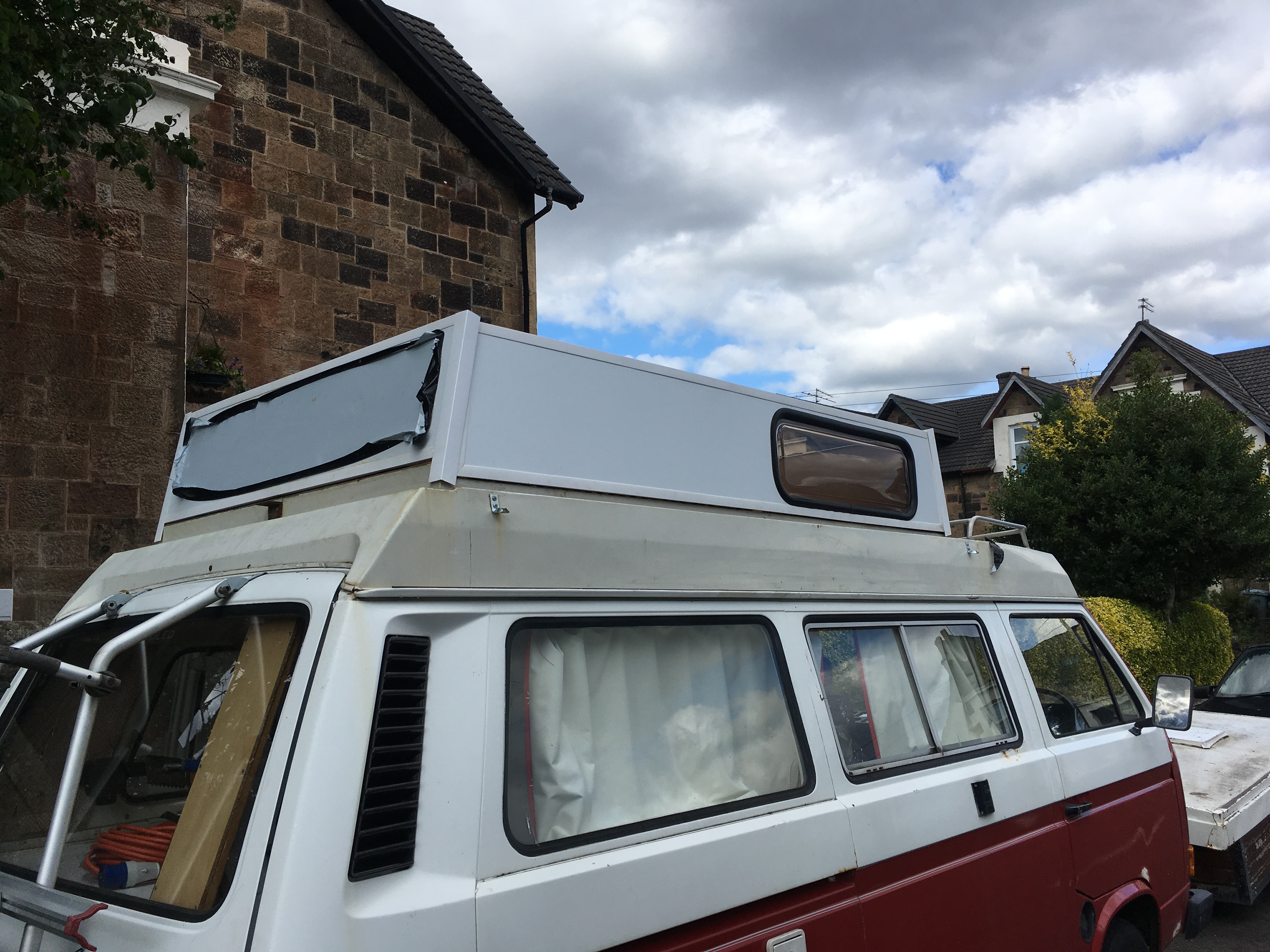 All four lower panels are now on the van and catches fitted to lock them together.
Since the picture was taken I've trimmed the plastic edge trims and latches, now need to consider how to fit the top half!
1982 2.0 Aircooled CI Autohomes Kamper
Top
Post Reply
24 posts