Pretty much as we bought it:

Since then, I've added the four light grille and some additional spot and fog lights. I've also painted the steelies white and sourced (8) hubcaps off of Ebay in various states of shinyness (still a work in progress). I've butchered a spare sliding door seal that the PO gave us to fit the passenger door (which had no seal at all) and "installed" a big slab of polystyrene in the space above the engine and below the bed frame. I've also fitted a 12" subwoofer powered by a cheapo 30w amp and managed to find a remote control for the stereo. And an air freshener in the shape of a surfboard. And a 12v cigarette lighter/USB charger socket thing. I've also removed some of the stickers on the rear window that had rude words in them.

Oh, and here's the engine:

Replace the lino in the back (it has unshiftable rust marks on it where it looks like a spare wheel had been lying)
Fit a rear wiper
Add tint/mirror film to the rear/side windows
Get new tyres (they're OK, but not brilliant)
Use it more (in conjunction with our rarely-used National Trust membership)
...and the mirrors automatically fold in at 65mph to improve aerodynamics.
Top

After having a VW T25 Autosleeper hi-top of about 9 years, we decided we wanted to convert a van to our own taste, that would also fit into our garage, so we kept an eye out for a van that had already been altered from the original spec, a couple of months of searching and we found this Caravelle, it already had the rear seat removed and doors cards/carpeting altered by the previous owner, so looked to be what we were waiting for.

First off we got into a bodyshop to sort out dents and some rust, then a full respray from the original Red, although it looked great as it was, we fancied a change to VW Viper Green metallic, probably not everyones taste.

Next up was a Elevating roof.

Then we had the camper interior fitted, and all door cards and seats reupholstered by Bromsgrove Auto Trimmers, and very good they were.

Next it was lowered by 50mm on AVO springs and Bilstein B4 stocks. And it fits in the garage, good excuse anyway.

Then we were ready for this summer, Happy Days!!!

Here is mine, its work in progress

The lone ranger was not alone !!
Top First post as new to the forum & club. Not our first VW - had few air-cooled over the years bug, bay and built a 73 Squareback from the ground up few years back. This is our first T25 - "Monty" bit of stinker at the moment - but grand plans! He's a 1984 Twin Slider tin top soon to be running a completely rebuilt 1.9 DG. Plans are to enjoy the remainder of the show season in him and start an overhaul through the winter!

This is dolly our 1985 1.9dg which we have only owned a few months previously owned by a lovely lady who spent thousands on her keeping her too a good standard.
Engine rebuild 2009 and a ton of receipts for loads of stuff far to much to list but in the few months I've had her I had the water jacket seal go the week before I was due to go to silverstone to watch the f1 got a couple quotes way to expensive so done a DIY job. Drove her to silverstone come back and the other side went so another DIY job with engine in situ. So hopefully going to concentrate on cosmetics now all is well and will post more pics.
Top

Hello, this is Emma a 1989 2.1 panel van that has had a Reimo conversion done on it, I have owned the van for 4 years now and is my first experience of any VW. I found this on my companies Intranet site for sale (see pic 1). I have sourced many many parts including a set of 5 Carat alloys, 2 captain chairs, US Vanagon padded steering wheel, she has been fitted with LED's throughout (interior and exterior), lowered by 40mm by using Avos springs and Bilstein shocks, powerflex bushes. Fully rewired (apart from headlight relay mod) and runs a dream. Future upgrades are power steering upgrade so that the other half can drive it, and she is being stripped down, bodywork repaired and re-sprayed in a new colour for next year. Her last outing is V-Dub island before the major work begins.

And now all done:

exciting project for both of us and our first camper! Hopefully much fun to be had, we are heading down to west wales for a trip next week

Took her away Friday night down coast even though running bit 'stuttery' (down on power accelerating, ticks over perfect), I think the Carb needs sorting, will try some cleaner.....

Bring on the winter surf, she has a heater

I drove her back from Linconshire to Hampshire and the following day the fuel tank let go and dumped its contents on the Floor and the work began. So far in the 4 months she has had new fuel tank, new fuel and vacuum pipes. Carbs overhauled. All service items. She was then back on the road for about 2 weeks and the rear wheels bearing went. On investigating the wheel bearing it was discovered that the brake shoes were worn out cylinders leaking and all the CV joints had seen better days. After all that was done. 3 days later the starter motor packed up.

Replaced the starter motor and 3 days after that she was running very rough lots of back firing and splutering and finised of with clouds of white Smoke. Turn out to be an exhaust valve seat had gone through the head destroying the casting. Piston rings were way out of limits.

In between all of this we have had some great weekends away in her. We are of to Dubs in the forest at the end of Sept.
1981 2.0ltr CU Aircooled Autohomes Ci
Top

So many nice vans...

I started out with bays. Had 6 of them, including two campers that were taiga green. What can I say, I was young and need the money

The doka was bought by a local e-company and they had it for about ten years. Then it had two owners before I found it for my brother in law, who had gotten the vwvirus from yours truly. He had it four years and did a few upgrades (carpets, GL-dash, DEFA system, xenons, big bumper up front etc) before getting an 8-seater syncro. Finally, I could get a white syncro doka! I have had a red one (marsala red) and a black one (originally blue, not a nice job), but always wanted a white one.

When my brother in law got it it had 33000 kms on it. Seems it was mostly driven out to work sites, then used as a warm and cozy place to eat your lunch. So the engine prob had a few more hours..

Now it has 94000 km on it and I have added tristar rear sliders, rear seat belts, alu canopy, 235/70-16 BFG ATs on Allroad alloys, power flex all around. No lift, I like the way it rides! It really needs some attention to sort some rust and a new paint job. And a subaru 2.2. And sound proofing. And...

This is how it looks now. Only it sits without an exhaust. So I´m driving a sharan. Oh, the shame 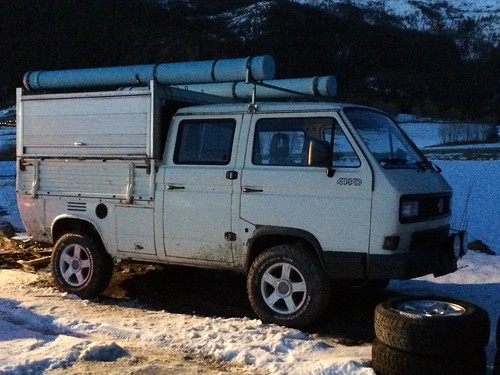