Can’t make it work- all I get is forwards.
Selecting gears at gearbox, with engine off obviously, gets all 6.
Followed the Bentley Syncro specific instructions.
All that’s changed is the rear linkage shaft from petrol to diesel type, as engine changed to one that uses Diesel engine mounts.
Wanted: offside part of full-height walk-through bulkhead behind front seat: 251 863 170
Top

The parts that differ petrol vs diesel are the rear shaft (tube), the cast 'selector lever' (socket), and the 'plate' (supporting bracket) for the rear sliding bush. ETKA shows the petrol/diesel-specific part number for the first two, but it only shows one part number for the 'plate', 251711187B. Possibly an 'A' suffix part exists, but the T2SY illustration (7-11-69-20) does not show it. I've just verified this by crawling under my diesel pickup with the plate off my petrol van in my hand. The diesel one places the bush lower, wrt to the gearbox, than the petrol. There is some wrong information around about this, for example Brickwerks list 251711187B as 'all Syncro'.

Update: Some Googling revealed 251711187C, the diesel Syncro plate. It's not in my old copy of ETKA, but some of the web-based parts catalogues based off ETKA data are showing it.
Syncrosport
Volkswagen Transporter, reloaded.

Thanks Andy. I should’ve been more specific- I’ve changed the tube, socket and plate to diesel ones. Well, it was one unit I bought years ago, but not checked everything.
The tube and socket are defo different to petrol. I will confirm in morning that the plate is also.
Wanted: offside part of full-height walk-through bulkhead behind front seat: 251 863 170
Top

AFAIK on Syncro the rear bush plate is the petrol version on both petrol and diesel it is only the 2wd that uses the engine specific plate, so just check it's the same as the one that came off - that's what ETOS says, and it makes sense as the gearbox is pretty much in the same place on both petrol and diesel engined vehicles whereas on 2wd the gearbox mounts are very different and the gearboxes sit in different position relative to the chassis; on a syncro the rear linkage differs because of the bash plate and that is why the diesel has the diesel version of the alloy cup, very subtle difference
251711187C is the 2wd diesel plate
there was no suffix A

easy alignment method, Lisa in drivers seat, you underneath

in neutral
loosen pinch bolt whilst trying to prevent the tube that is slid back from getting in the way - on the diesels I think they have a bigger longer clearance slot at the back for this reason; check that length of linkage is right, the nylon guides on the front linkage under the gearstick should be in the middle of the alloy guide piece front to back, if necessary adjust the length, then have Lisa move gearstick side to side in neutral a few times then then hold it over to the right (ie 3rd 4th neutral) whilst you lock off the pinch bolt (pinch bolt should be vertical on the right)
then put the tube back in it's fixed position and all the gears should be where they should be 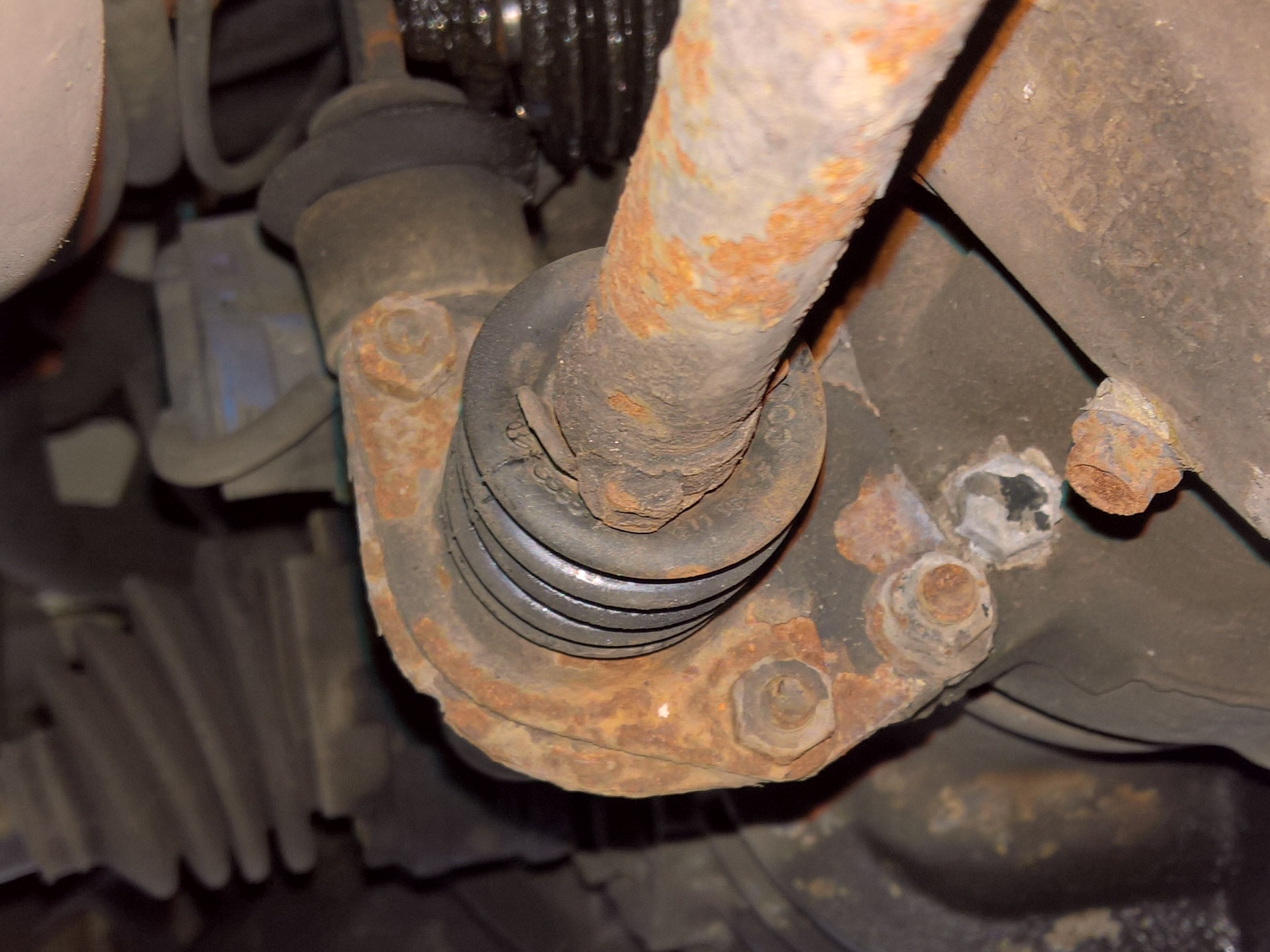 If you compare this with 251711187B, you'll notice its a diffent shape, effectively the bush is placed several mm lower than on a petrol. eg:
https://www.brickwerks.co.uk/gear-linka ... o-all.html

This makes sense as the diesel 'socket' is ~10mm longer than the petrol version.
Syncrosport
Volkswagen Transporter, reloaded.

If I may chip in, this is a moderately frequent query from customers fitting one of my 711 shifters.
All forward gears but no reverse means that the longitudinal shaft cannot rotate sufficiently to find reverse even after the fork has negotiated past the welded R/G stop.
So the rear half needs (about) one "click" rotation anticlockwise when looking forwards to enable the cup/ball to push the gearbox internal selector lever that last bit and not baulk across two of the selector rods.
Two pairs of mole grips and give it ago.
85 syncro Caravelle twin slider Oettinger T3200E-6
90 SA Microbus supercharged wbx/UN1 project

Obv I have never had a diesel Syncro so have never had one to compare, I'm just going by the parts catalogue, and there are mistakes in it we know, so I bow you Andy that is the diesel plate fitted on yours, I'd want to check more than one to ensure that they consistently fitted the suffix C on diesel Syncros - Russel will have seen the most so maybe he'll chip in; but it's one of those things if you don't have both to hand and compare and don't change them it just is what it is, it is only when changing engines that the specifics of the gearbox mounting and variants of the linkage come into play, particularly on 2wd, then people on facebook just say 'I just bent it and it works okay', but I get to repair plenty of gearboxes that pop out of top gear, sometimes partly caused by not changing the linkage, which is why I advised Patrick to change his (and supplied the linkage, but didn't actually examine it as I got it and it went straight to Patrick).

Last week I got to scrabble around a converted to Syncro from 2wd SA big window van which has a lousy change, AGG engine fitted, and the rear linkage on that was something else entirely ( a right bodge), but the body is different, so different centre bush mount, and there are 2 different rear linkages fitted to the SA 2wd vans, of local manufacture so not necessarily the same as the petrol and diesel variants of European manufacture, and it had been butchered and bent so no way of knowing what it was originally - I've lent him a Petrol Syncro rear linkage to try, and he might try it with the diesel alloy cup as well and see which works and if it it solves his issue, and if not then he'll be looking for a Syncro diesel rear linkage rod if anyone has one spare.....

but for Patrick I don't think the problem is the plate just the rotational adjustment of the linkage, the rear alloy cup should be roughly vertical in both planes in neutral and the gearbox selector shaft will be sprung to push it fully out of the gearbox so in neutral in the 3rd 4th plane, so set the gearstick in that position and tighten the pinch bolt there and it should be right; assuming standard gearstick of course

waiting with baited breathe for update

Top is linkage as came on the WBX van with Bricky replacement selector cup (before OE part became available again.
Bottom is Diesel Syncro unit as supplied by Aidan. 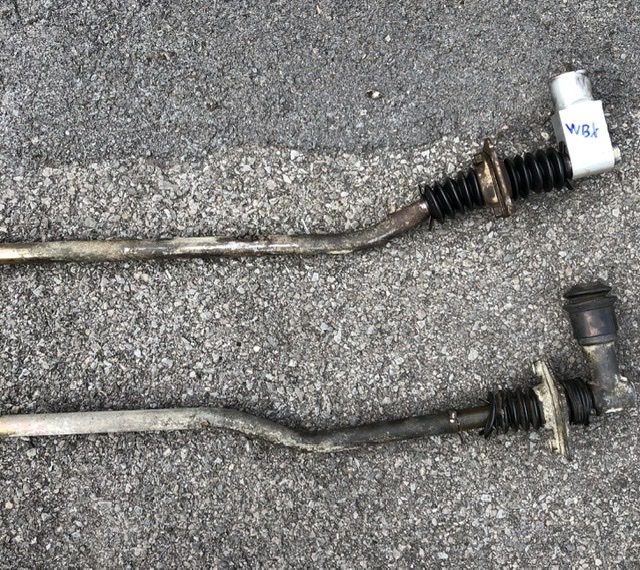 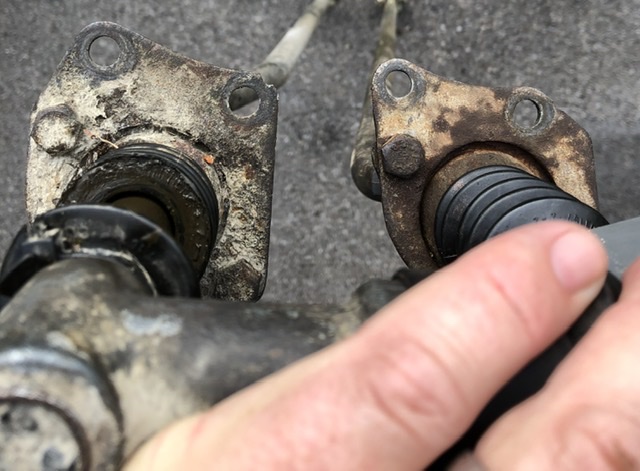 So, should I move petrol plate to diesel shaft and selector or just leave diesel unit as is and use that?

Once I’ve got gear change working, just need to change a torn CV boot, then refit rear driveshafts. It should then move under own power for first time in 5 years. Lots of little jobs before MOT, least of which is seized wiper motor.
Wanted: offside part of full-height walk-through bulkhead behind front seat: 251 863 170
Top

When my back has recovered tomorrow I’ll try more rotational settings to find the sweet spot.

How much extra is cut from the diesel gear linkage drainpipe? I think I’ve got two petrol ones and both foul the rear end.
Wanted: offside part of full-height walk-through bulkhead behind front seat: 251 863 170
Top

Hi Patrick, sympathies with your back, I know what that's like.  So I'd been crawling about under my petrol Syncro all day.. and I fancied a change, so I went and crawled about under my diesel syncro for minute with a tape measure.

The cutout in the plastic tube is 5cm across, and 8cm long. HTH

PS. Just a thought, I seem to recollect the supporting stay for the tube can be fitted in two positions - maybe there are two M6 captive nuts in the prop bar ? Perhaps you can make an adjustment to solve the interference you've got.
Last edited by syncroandy on 31 Aug 2020, 18:19, edited 1 time in total.
Syncrosport
Volkswagen Transporter, reloaded.