Hoping someone with much more knowledge can educate me please?
I noticed a fuse off my leisure battery had had some heat to the point of melting the casing but don’t think the fuse (7.5A) had actually blown. I have no idea what this is feeding though. With the fuse pulled i can’t see anything not working

I traced the red wire (pic 1) back to a white flexi which goes to a connector on top of the fridge (pic 2). The outgoing white flexi then goes to the fuse box for the 240v. 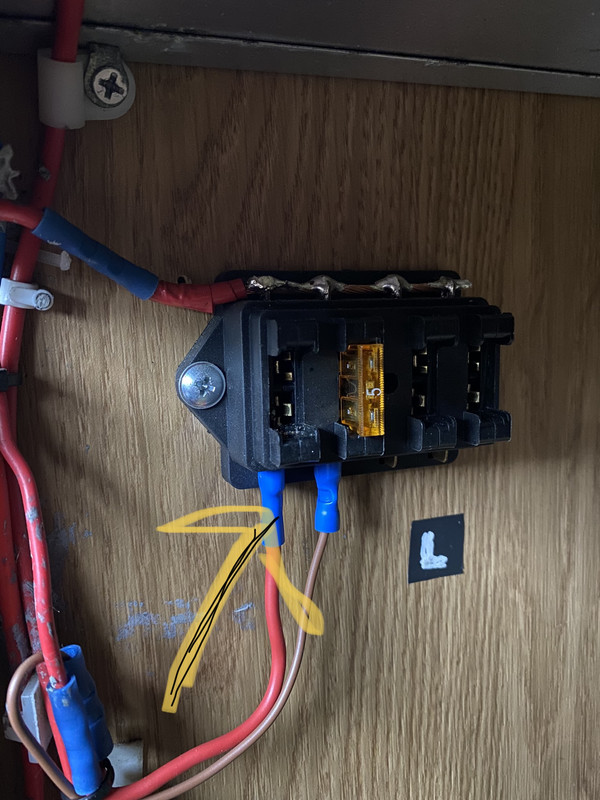 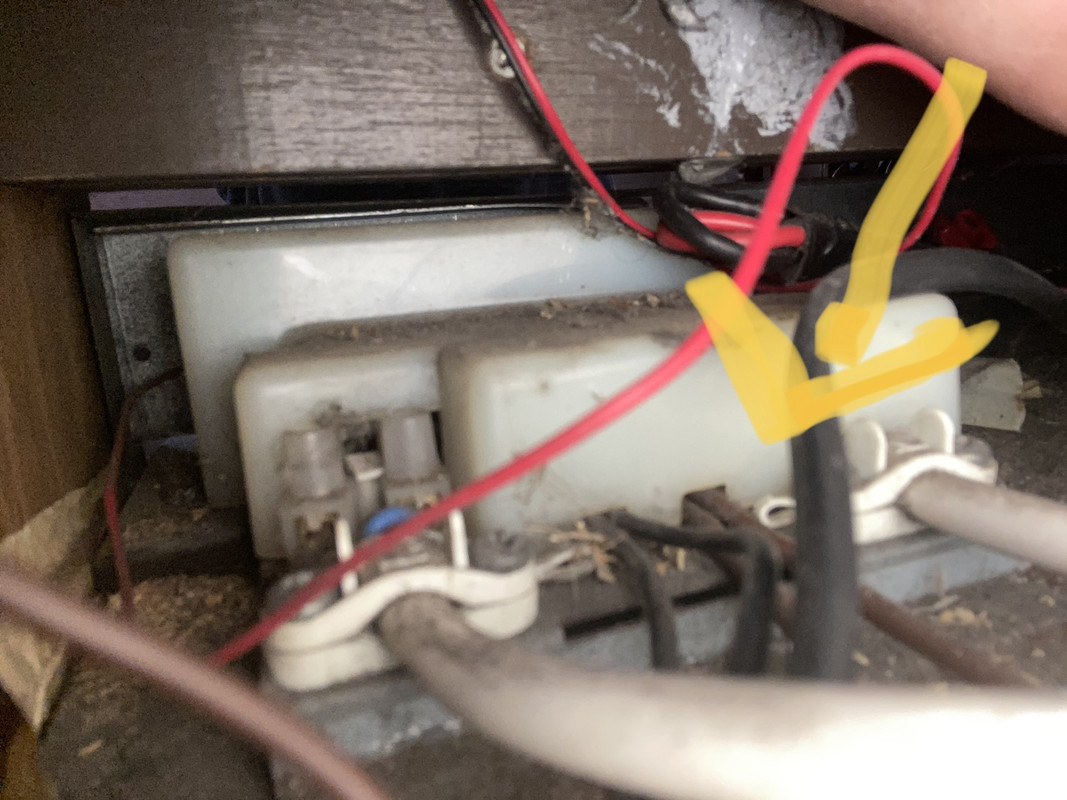 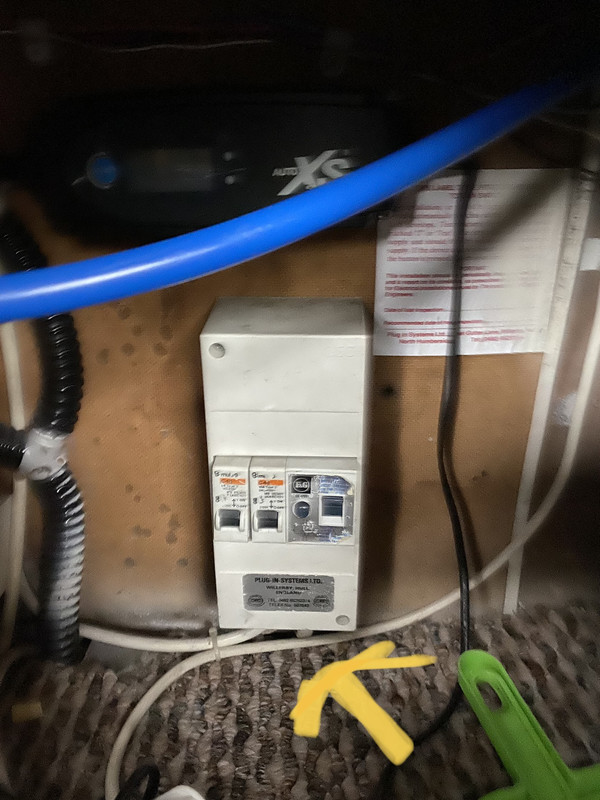 Could be that the fridge was rigged up to run off your leisure battery, I tried this once and the lead connecting them became very hot, suspect it is not designed for this as the fridge draws to much current, and would probably drain the leisure battery in no time at all, unless it is somehow trickle charged.
1984 Campervan 1.9DG Petrol WBX
Top

however the electric ignition feed would be less than 7.5amp fuse
the 12v heating element for the fridge would be 15amp fuse , possibly 20amp depending on model and the mains fused at source.

The fridge is electric ignition but that is still working with the fuse pulled.....the ignition light flashes anyway. I’m wondering based on what’s been said if the 12v fridge element has been wired to the leisure battery as that has never seemed to work effectively, although I know it’s not great anyway so have never really used it. As i sit typing i remember there is a flashing led in the back to indicate when the 12v was on.........hmmmmmm......will investigate tomorrow.

If this is the case, assuming the right fuse and assuming it is only used when driving (i.e. split charge running), is this a problem or does it need to be fed from the main battery regardless?

There are three sets of connections in the white box on top of the fridge. 12v for electronic gas ignition, 12v for the fridge heating element for use when driving and the 240v for running the fridge when on electric hook up. It is more than likely conected to the 12v element as the electronic ignition works with the fuse pulled.

As far as which battery it is connected to it shouldn't make any difference as a split charge relay should connect both batteries together when the van is running so the leisure battery is charged while driving along. The fridge itself should be fed via another relay which only connects the fridge to the battery when the ignition is on too. Sometimes people fit a manual switch in place of that relay though. What you don't want is that bank of fuses connected directly to any battery as the fridge will flatten it in next to no time if the van isnt running. What does the yellow 5A fuse supply?

The original conversion wiring would have done all this but somebody has obviously had a fiddle and replaced it with their own version.
Vorsprung Durch Technik my ar$e!
Top

Oh and as for the heat damage to the fuse or fuse holder, the fridge pulls about 8A when running on 12v if I remember correctly so if the blade fuse holder connections are loose it will get hot without rupturing the fuse. You could try swapping the cable to a different fuse holder in that fuse bank. Check its a nice tight fit.
Vorsprung Durch Technik my ar$e!
Top

many folk say that the 12v on their fridges are no good , and that it’s only there to maintain the temperature the fridge is already at , this is simply because most installations are not done well.
Too thin wires , too long wire runs resulting in significant voltage drop mean many factory fitted fridges are indeed rubbish on 12v .
however , the 12v heating elements are generally about the same power as the mains heating elements , and if correctly installed will work just as well , infact , better because very few three way fridges have any temperature control on the 12v side , so they just cool and cool and cool , often too much !

whilst what Bren says is correct , wiring the 12v heater of the fridge to the leisure battery isn’t ideal , as it basically makes the fridge third in the line to the alternators power , meaning the leisure battery doesn’t receive all the charge it could , as the fridge is taking as much as the alternator gives the whole time you are driving , the battery acting as a buffer rather than a power source . The most efficient way is to ensure the fridge is wired to the main battery via a alternator triggered relay , infact ideally direct to the alternator itself , but this isn’t practical mostly .
you need to get maximum voltage to the fridge heater elements , which will mean thicker wires , short runs and better earth connections - using the vehicle chassis ( body) as negative solves one half of this , think of it as a very thick power cable .
Steve
tel / txt 07947137911

Thanks folks! Impeccable advice as ever!

The connection is in indeed the 12v connection for the fridge. The fridge has a built in switch to switch over to 12v and an indicator LED. I’ll switch the power over to the main battery and look to install a relay ay some point too just in case.

The other fuse is for the propex unit.

Make sure you fit the relay as you swap the feed over to the main battery , leaving the fridge on with the engine off will kill the battery in 3 hours or so ..... before you do that , I would install a new fuse in where it was, and reconnect it up and check if it only works with the engine running before you change anything .then once you know do the improvements .
Steve
tel / txt 07947137911

The connection is in indeed the 12v connection for the fridge. The fridge has a built in switch to switch over to 12v and an indicator LED. I’ll switch the power over to the main battery and look to install a relay ay some point too just in case.

The other fuse is for the propex unit.

Has anyone considered that at whatever age this is the electric compressor in the refrigerator is worn/duff and drawing too much power? I noticed our wires were hot and connectors to the relay were heat damaged. Never noticed cooling in fridge after long drive. So I’ve pulled fuse

It's an absorption fridge not a compressor fridge, works off a heating element rather than a motor
Vorsprung Durch Technik my ar$e!
Top
Post Reply
11 posts • Page 1 of 1