I wasn't happy about the multiplug adapter board introducing a new potential for short-circuiting the terminals, so I made a little clip-on section to cover up the exposed solder tags. It's fairly secure on its own, but I think a zip tie around the whole multiplug/adapter/clip assembly will keep everything together nicely. The milky white plastic certainly helps to make them a lot less directional. Here's one on a little test board. I'm using the main beam location on one of the prototype boards, but fed by the dashlight dimmer so that I can experiment with the right resistor combination to give a good range of brightness on the dimmer. 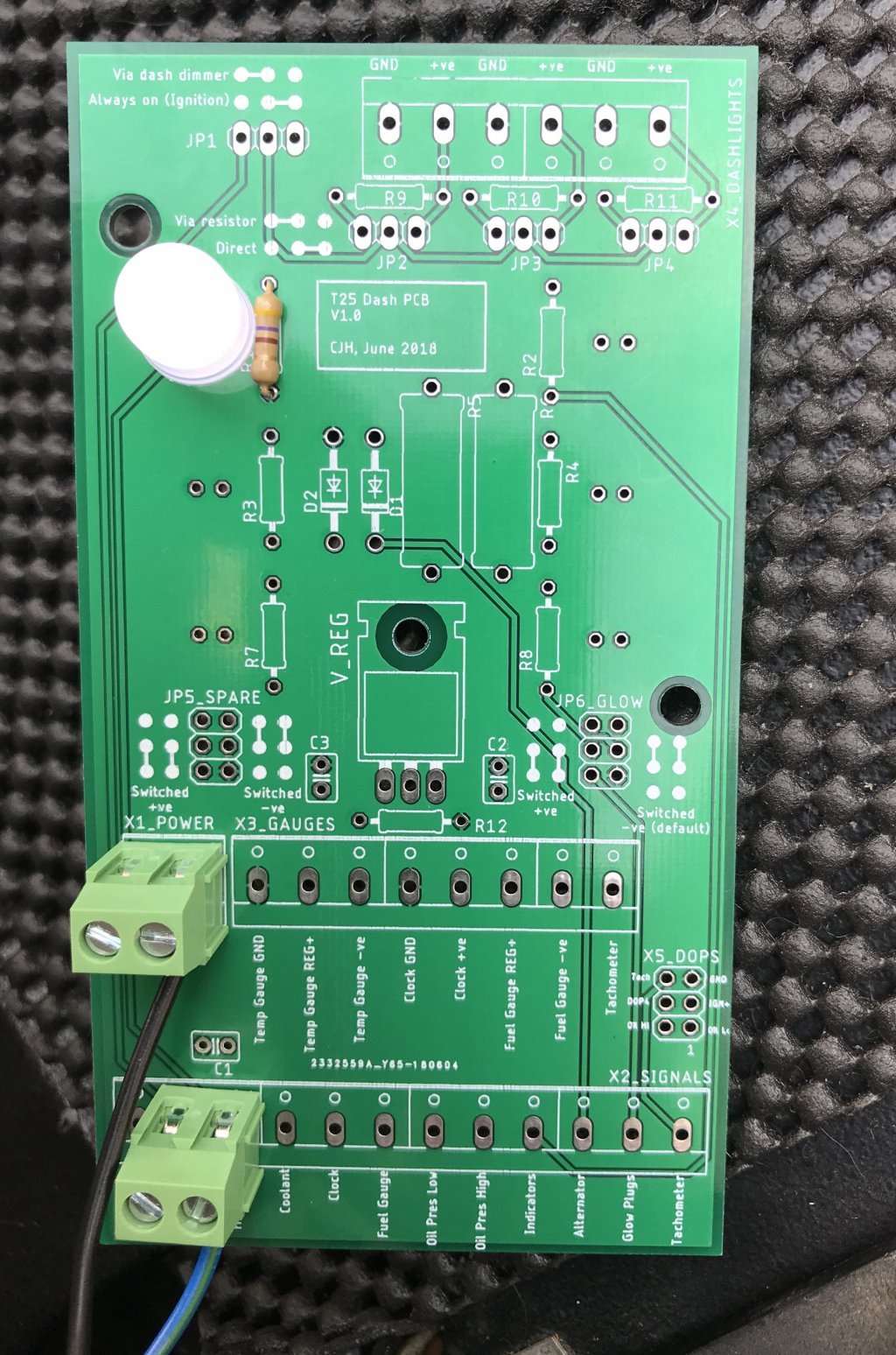 If I stand it about 3mm above the surface of the board, the main part of the LED ends up roughly where the bulb would do in the normal bulb holder. Will test the symbol illumination later when it gets dark. It fits quite well in my bulb holder too. I'll probably make the hole a tiny bit smaller to allow for variation in the LED diameter, on the basis that it's easier to file the hole a bit bigger than it is to file it a bit smaller. 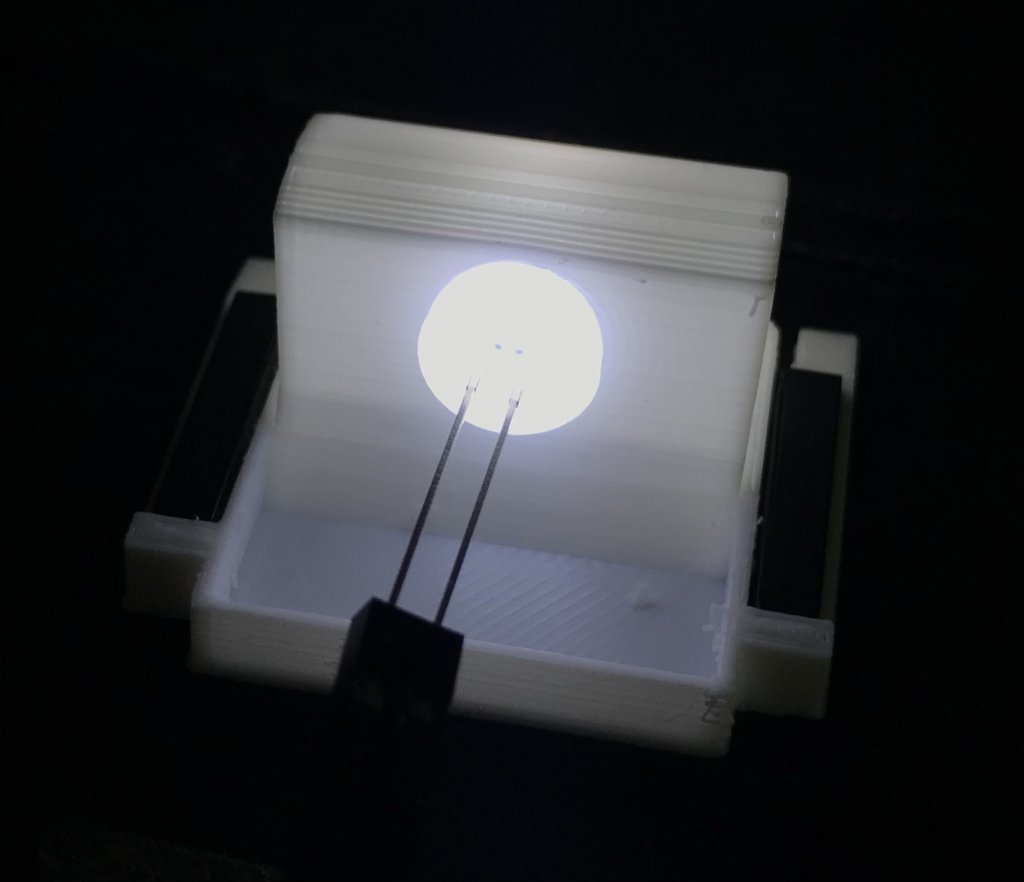 When it gets dark I'll double check that the light from the bulb holder illuminates the gauges properly, and then I'll probably order a small batch in SLS nylon.
"I'm a man of means, by no means....King of the Road!"

Fitted green ones in mine as it provided the most pleasing light (on the eye at least). At one point I had tri-colour LEDs and a five-way toggle switch fitted so I change to any colour but it began to get rather silly so I opted for green. Can never quite understand why some owners fit ultra bright LED bulbs in dashes - its very unpleasant. I recently swapped to colour-changing ones but think I'll still revert to the green ones. Fun trying though. Presently working on my 'engine fire' detector.....
Roller paint your camper at home: http://roller.epizy.com/55554/" onclick="window.open(this.href);return false; for MP4 download.
Top

Agreed - they need to be bright enough to see, but not too bright to compromise your vision in the dark. I tried these bulbs in the dark this evening, and they seem fine. They're 3.0-3.4V, 20mA (max 30mA), so the standard 470 ohm resistor is ideal. The dimmable 12V LEDs I showed earlier dim to almost nothing on the dimmer minimum setting - too dim in fact - whereas these 10mm LEDs have a smaller range of brightness. The ones I've bought are closer to a 'cool' white, which looks fine, but for personal preference I might look out for some 'warm' white versions. The nice thing is they're dirt cheap, and come in a wide range of colours.

I've ordered a dozen bulb holders in SLS nylon, having very slightly reduced the hole (to 9.8mm) so that the LEDs are a very tight fit. Here's my final design. The light pattern is no different from what I get with the 12V LEDs in the original holders.

I made some extra variants.

One to suit some pre-wired bulb holders for 'T5 wedge' bulbs. I bought some of these in the hope that they'd fit the octagonal holes in the original bulb holders, but they didn't. But they fit this: And I made a variant to suit the original style bulbs/bulb holders, complete with lugs to hold the flexible circuit board:

So I've got a few options now.

I don't know what you lot are going to do though.

While I'm playing with AutoCAD....

I have a spare binnacle that has the usual broken lugs. I thought I'd see if I could make a repair piece. It's not really feasible to make a right-angle bracket, because any screws used to hold it to the side of the speedo or clock/tacho housing would be visible inside the instrument lens. So I think a different approach is needed.

So I made a gripper piece that fits around the supports, and clamps what's left of the lugs to the dash. No glue needed - one each side will clamp the binnacle down and stop it moving in any direction.

The first print is lousy quality (the printer needs a bit of attention), but it proves the concept I think. 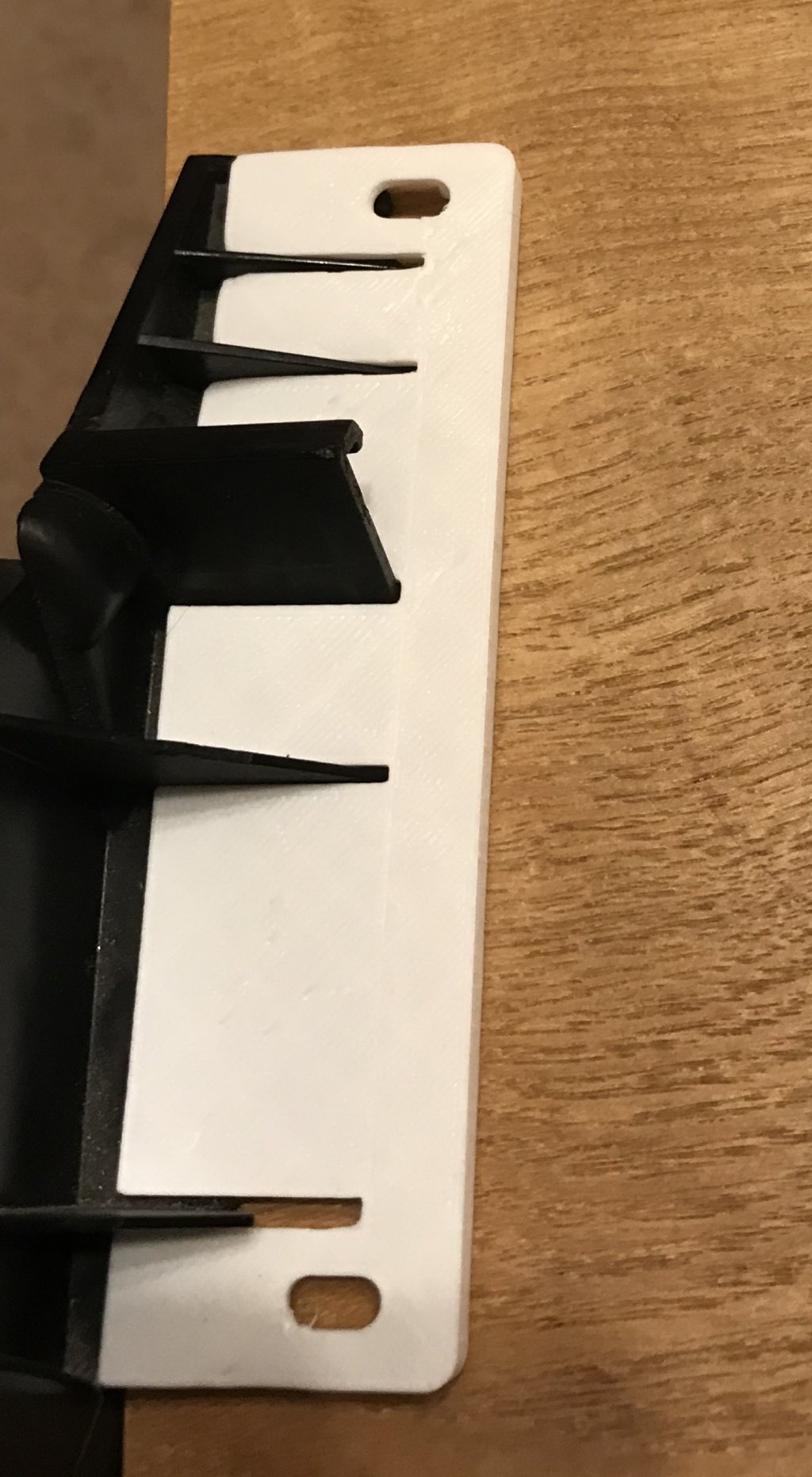 Having hard-wired mine several years ago and become familiar with the dash circuits, Chris's kit appears to cover all the blind alleys you can hit between models as well as providing extra warning lights for those that need them. When I did mine, swapping the mutiplug for an ATX plug was the only way I could the extra connections needed to get a functioning rev counter and as I now need an extra LED for my engine fire detector, I'll be needing yet another connection. I can't recommend this DIY kit enough. The original membrane was the cheapest solution for VW (well, VDO) but like most plastics, degrades with heat if not time.

That said, if you really don't have a clue what you're doing and struggle with instructions, it might be better to give the build job to someone who does, or pay more and buy a ready assembled board elsewhere. Hopefully at some point I'll do a build video of this kit for those that find soldering/connecting daunting.
Roller paint your camper at home: http://roller.epizy.com/55554/" onclick="window.open(this.href);return false; for MP4 download.
Top

Thanks Ralph. Whilst the kit will be aimed at DIY builders, I haven't totally ruled out selling kits built-to-order. I'll probably use the next test build to make a sensible estimate of how long it takes. Mind you, most people know someone who's handy with a soldering iron, and it's not a difficult build I think. Either way, it should work out quite a bit cheaper than the commercial ready-made solutions.
"I'm a man of means, by no means....King of the Road!"

Yup, and more flexible I'd say. Glad you included my 10mm LED mod. It transformed mine. I did try the 'aftermarket' LED bulbs and wasn't impressed. The dash guts are hidden once the cowling is in place. In this day and age I see no point sticking with bulbs at all. They get hot, don't last as long as LEDs and use more current. All my running light also since replaced with LEDs so if I am unfortunate enough to break down, hazards and tail lights will operate for days rather than hours

My revised PCBs arrived yesterday, and I've been building one up for testing - slow process while taking build photos for the instructions. Just awaiting a couple of components before I can finish it, then I'll tot up the costs and make up one or two kits to test the water.

But I've realised I have a few questions about different dash variants, and I suspect that what I thought could be a one-size-fits-all solution isn't quite suitable for every variant yet. Maybe the collected wisdom of this forum can fill a few gaps for me.

Firstly, what colour is the glowplugs LED on the diesel variants. Is it yellow or orange?

Secondly, while googling for an answer to that question, I saw a video which showed a yellow light for the high beam indicator. People mostly speak of a blue light in that location, and there's even a blue plastic cap used to make a white light appear blue. But my own dash had a yellow LED for high beam (and no blue cap), and I just assumed someone had swapped out a failed white light. Having now seen another example of a yellow high beam light it seems possible that some variants came that way from the factory - can anyone confirm?

Thirdly, tachometer connection: apart from the signal wire, does the factory tacho use any other connections, such as live and earth? If so, what terminals do those connections use?

Fourthly, LCD digital clock variants: is the connection to the digital clock an integral part of the original flexible circuit board, or a separate circuit board? What connections does it use? I assume it probably uses the same permanent live and earth as the analogue clock, plus maybe a backlight supply. Does anyone have a photo of the LCD connection terminals?

My 84 petrol Australian van had a yellow high beam LED in it. I swapped to a late cluster with rev counter and LCD, which has a filament bulb with blue cap

slowcoach wrote:My 84 petrol Australian van had a yellow high beam LED in it. I swapped to a late cluster with rev counter and LCD, which has a filament bulb with blue cap

Thank you - not just me then. Mine's an '84 petrol too. I wonder when the change to blue happened. I thought I'd heard that the white bulb/blue cap setup was because blue LEDs weren't available at that time - perhaps blue became an international standard so they couldn't continue to use a yellow LED?
"I'm a man of means, by no means....King of the Road!"

The tacho is a pain in the ass Chris. I'm at work but if I remember rightly I had to snip off part of a membrane with the tacho plug (three connectors) as I couldn't see another way to connect one without it being a Heath Robinson affair. I never did check whether such a plug exists on its own. I will do some digging....
Roller paint your camper at home: http://roller.epizy.com/55554/" onclick="window.open(this.href);return false; for MP4 download.
Top

Thank you - next time you have your dash out a photo and some dimensions would be ideal.
"I'm a man of means, by no means....King of the Road!"

CJH wrote:
Thank you - not just me then. Mine's an '84 petrol too. I wonder when the change to blue happened. I thought I'd heard that the white bulb/blue cap setup was because blue LEDs weren't available at that time - perhaps blue became an international standard so they couldn't continue to use a yellow LED?


yes thats correct. i do remember blue leds surfacing in my after school electronics club in about '92, but even then i vividly remember a single 5mm or 10mm blue led costing £10 each! so they were pretty scarce indeed. red yellow and green were the options, maybe an orange too?
===================
1984 TRAKKA Conversion Subaru EJ20
Top
Post Reply
409 posts