More new parts...
There is a lot of work to do, so I got 2 litres of etch primer.

Troy wanted to try this one....

I have already 'split' the heater box casing ready for work to begin.
1983 Tin Top with a poorly DF.
Soon to have a whizzy DJ.
Top

As promised -
With a mostly dry Sunday, I was able to strip, wash and partially refurb the heater box assembly.

Before - wearing 30-odd years of dust and rust

An array of parts to be cleaned, painted and refurbed.

The heater matrix appears to be in reasonable condition so is going to be refitted.
Along with the new motor.

The motor and matrix installed complete with new foam insulation.

I was impressed with the fit of the Brickwerks foam strips.

It appears that the heater box has been opened up before by someone called "RL".
Unfortunately one of the plastic baffle foam-retainers is missing.

I have loosely assembled the box for now.

I will need to borrow a foam punch from work, so that I can assemble the foam strips onto the baffles.
1983 Tin Top with a poorly DF.
Soon to have a whizzy DJ.
Top

A pleasant evening in a few ways.
Firstly, by sheer luck, I found the missing baffle foam-retainer in a bag full of parts in the van.
So it must have fell out of the blower casing a long time ago.

Saves me making another, as they have not been available to buy for a very long time.

Secondly a bit more progress on the van itself.

I made a piece to repair the B post lower section. The rear corners had quite large radii, so I formed the metal sheet around a round torx key shank, up against the bender stop.

The square-ish "U" shaped piece to the right. 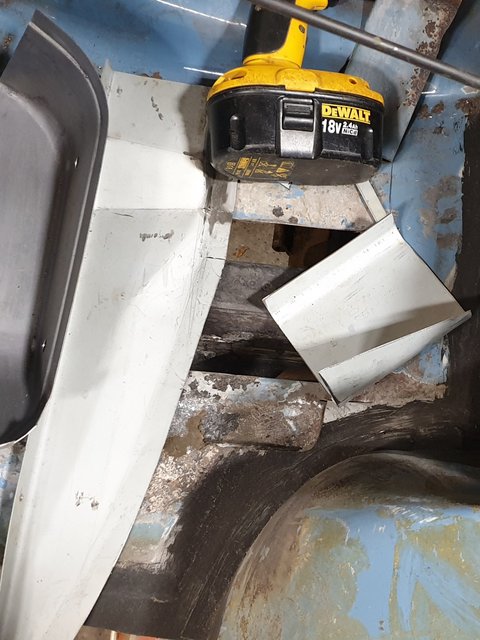 I was pleased to find that it did not need much tweaking to make it fit.

The forward b post panel that was made last week was screwed back into place, and then welded.

Here is an action shot of the forward facing panel being spot-welded in place.

Any gaps or tricky bits were plug or seam welded into place.

There is just the forward corner of the B post to finish, before the wheel arch can be fitted.

The bottom piece can go in any time after that.
1983 Tin Top with a poorly DF.
Soon to have a whizzy DJ.
Top

Flaps all assembled.
I made sure that the foam and retainer plates were not going to come loose.
I evo-stik'ed them in place.

Motor wired up ready for the PWM module.

The casing fully assembled to the heater control levers.

What is odd, is that the my heater box does not resemble any assemblies in Haynes nor the various Youtube videos.

This flap assembly is mounted differently to the equivalents on all other vans that I have seen.

Although not bodywork, I managed to sort the blower motor control - Similar to CovKid's pwm thread.

No pictures means it never happened.

So here it is after I fitted the last of the exterior foam seals.

An evening of mixed emotions.
Mainly anger and frustration with myself.

Before anything could be welded in place, it was necessary to re-hang the front left cab door.

I bolted the door in place, with Troy's help.
Then it was found that the door's window frame was distorted. (Bent rearward).

This is where Troy's experience kicked in.
It was he who said that the lower part of the 'a' post (door frame) had crept forwards - assuming that I had cut too much panel work out.

To remedy this, he got a chunk of sturdy wood and wedged this between the a post and the front deformation member.
A total movement of about 15mm.

We then persuaded the window frame forwards.. me levering the rear edge of the frame, and Troy hammering a wooden drift forwards inside the top front corner of the window frame.

A huge sigh of relief.

Troy happily teased me because he felt that I had been whining that nothing would fit.
It was probably due to my frustration at my own stupidity.

About 8 weeks ago, I had jacked up the front corner of the van to strip out the suspension leg.
What I hadn't realised is that the door had been leaning against the front of the van and when I lowered the van onto the axle stand, the door had got trapped under the van's upper front panel.
Bugger!!

The van door leaning against the nose of the van - a disaster waiting to happen...

Then to brace the A post to the main front-to-back chassis beam, it was agreed to tack in the diagonal cross member.

Bizarrely the bolt hole on the 'original' VW panel was nowhere near the hole in the a post.

The correct position should have been the upper of the two pre-drilled holes.

As you can see he had to drill a new hole through the diagonal outrigger.

Oddly - a look at the original piece that I had cut away a few weeks ago, showed that the newly-drilled bolt hole location was roughly correct after all.

Whilst still applying some leverage between the deformation member (bumper bar) and the diagonal outrigger, the outrigger was tacked into place.

So again, I took up all of Troy's time on the van, rather than letting him progress with his own work.