Hi all
So I'm still no closer to dealing with my dead DG engine & spring is getting ever nearer. I'm not going to go into reasons why on this thread, it's far too boring.

I have the chance (possibly) of getting hold of a freshly reconditioned MV engine, that has never been installed & is only a couple of months out the shop. So to cut a long story short, how easy a conversion is it? Taking my best guess from a few google searches, it appears it will bolt straight in & even take my stainless exhaust system. I'd prefer to stick my carb on there also, to keep it a nice simple engine. The chance of a few more horsepower from the bigger engine is appealing, but I don't want any complicated injection system or anything on there.

I've a good group of friends to assist with the work, all of us have experience of cars of this age & even engine swaps/upgrades, but none of us are familiar with the T25 engines at all.

Basically, do I go for this engine or am I likely to be biting off more than I can chew? Is it worth the hassle, or should I be looking for a suitable 1.9 DG?

There are lots of people on here running the 2.1 DJ's and MV's on the DG carb and distributor. it is still a worthwhile upgrade even without the extra power from the fuel injection, keep it simple

This is exactly the type of reply I wanted.
That's great news, thank you.
B plate 1.9 petrol bus
Top

You are on the early water system ? B reg ?
Personally given the chance I would take this engine , and opportunity to swap over to the much better later water system , save your self some hassle in the future . But of a expensive job if you have to buy all the late parts new, but you won’t have to worry about it failing and cooking the new engine anytime soon

If you swap to the late water system , you can keep the oil cooler easily and the 2.1 water pump

First thing I did to my DJ velle when I bought it was bin the injection and fit a dg carb , better low down torque on lpg and lots less hassle overall .

You already know that all WBX engines ( except the DF ) are the same externally , all parts are bolt on interchangeable, only thing you may need to get round will be the BoD if your van is prior to BoDness, but that’s easy to add the extra wiring and gauge and even easier to bypass if you don’t want it ( I wouldn’t recommend not having BoD despite what you read online , it works very well and is reliable if correctly maintained
Steve
tel / txt 07947137911

Questions like early or late on my bus are never straight forward.

I've found over the years I appear to have an interesting mix of the 2.

I have the plastic thermostat housing, which leans on it being a late I believe? The weird H piece appears to not be on mine, if memory serves, again, points to late? I've not done much with the cooling system over the years, barring a new radiator and pipes down the underside, so still learning about it.
Oh... Actually I swapped a pipe out to stainless on the left of the block, but I can't really remember what that was, other than replacing one that had turned to rust.

I don't think I have an oil cooler however. Lol
B plate 1.9 petrol bus
Top

Plastic thermostat housing came with the late cooling system. Do you have the bleed rail around the hatch opening at the top edge, if you do it’s a late system. I wonder if your ‘83/84 van has already been converted? I did the DG to MV conversion on my early cooling system (which I prefer) ‘84 van in 2015 and never fitted the factory oil warmer/cooler as the DG doesn’t have one. With a 80C stat and even a 87C stat I’ve never had any overheating problems. I ventured into the 140C oil temp range ‘once’ with a 87C thermostat on a very long run in summer where I was booting it, but otherwise I wouldn’t bother with an oil cooler. MV’s run cooler compared to DJ’s. My oil temp stays at ~100C almost permanently, so don’t worry about the oil cooler. You could retro fit a MOCAL 12 row cooler with 80C thermostatic sandwich plate later if you feel the need. I find it just fouled my speedshop exhaust though, but you can try the shorter oil filter to get around this.
Anyway, it’s a great upgrade DG to MV and I highly recommend it. Not too difficult either. 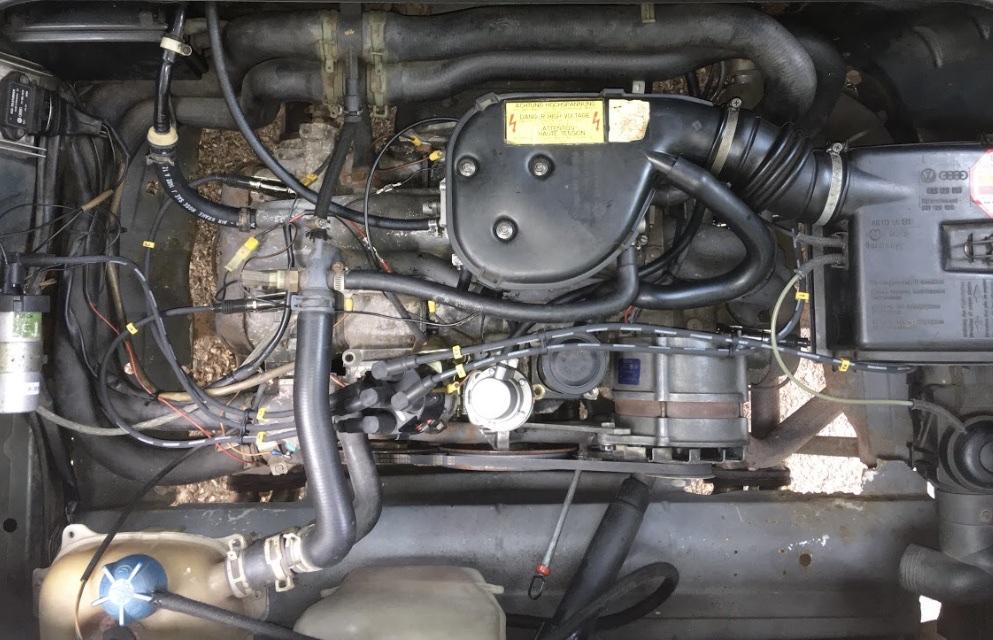 Thanks for the help and yeah, my cooling system looks nothing like that.

As for if it was converted, who knows. My bus came with factory air con, I keep removing elements of that that whenever I find it, so anything is possible. I think most of it has finally gone.
B plate 1.9 petrol bus
Top
Post Reply
7 posts • Page 1 of 1