Anyone changed these bushes?

Anyone changed these bushes?

Bushes on the end of the control arms (inner). Just wondering (apart from undoing bolt that goes through the bush) what else needs to come off to be able to drop arm enough to get bush out:

Taking the wheel off makes it easier, undo the bolt through the bush and Jack up the wheel end of the track control arm. 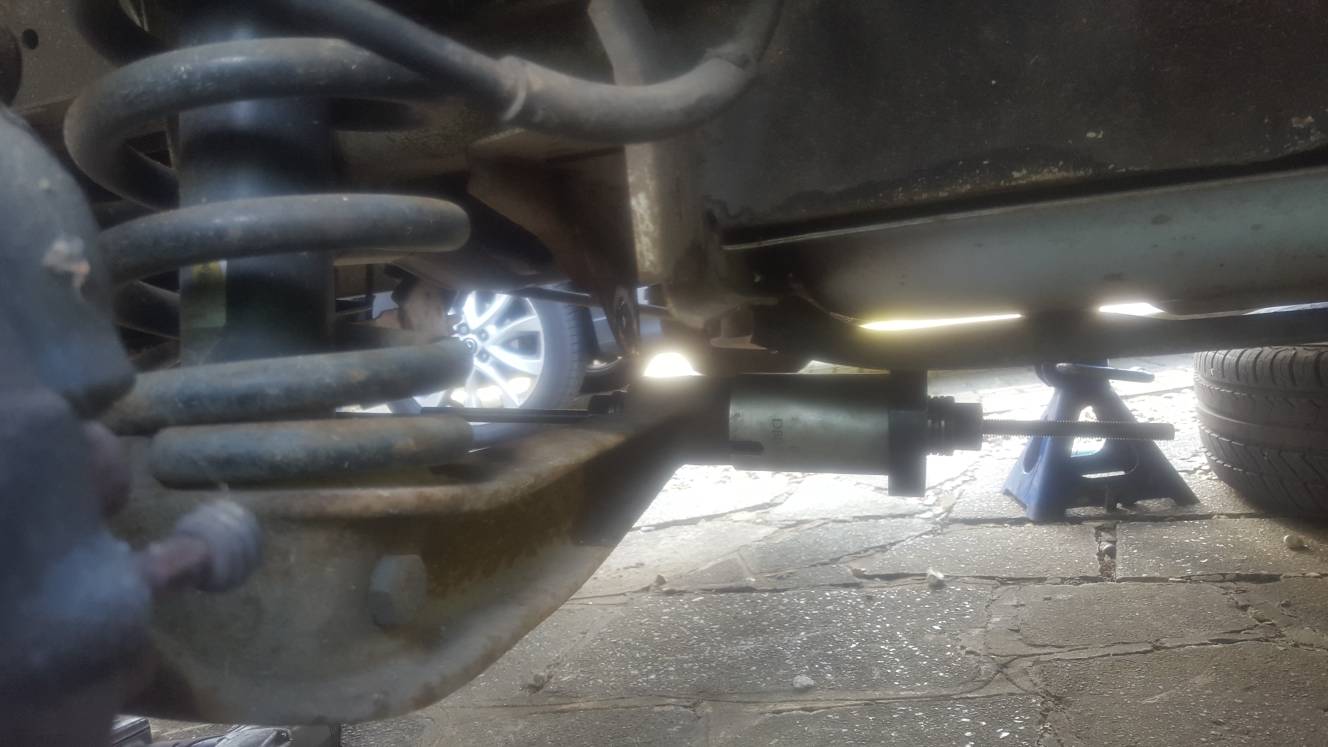 Whooppe - was hoping jacking the end up would be enough. Haynes suggested removing ball joint, and other stuff. Inner bushes not a job I've ever had to do (ever) but one of mine has a fair bit of play in it now - with suitably clonky noises. Already have powerflex replacements (easier to fit). Fun bit will be getting old bush but I have a drill and patience if required

Many thanks.
Roller paint your camper at home: http://roller.epizy.com/55554/" onclick="window.open(this.href);return false; for MP4 download.
Top

As you say, place jack at outer end. I just sat the brake disc on the jack - no real stresses involved. Axle stand obviously. No specialist tools as such.

I didn't mess around using a bush remover. No room to work under there really and would take longer in my view. Besides, not every owner has one so heres how to do it without. It was much faster to cut exposed end rubber away with a small saw (I used a tenon saw) against arm and up to metal tube, then had fun drilling the hell out of the bush (right through) with a 10mm steel bit until it screamed surrender. Wiggled the sleeve out with mole grips (photo below) and bush just fell/pushed out - if you drill enough holes right through it quickly weakens its grip

Also, do NOT even consider fitting stock bushes on this job. Despite the cost of powerflex (and their failings for swing arms), the job takes 5 mins as opposed to almost certainly hours trying to press in/out stock ones.

My main criticism of powerflex bushings (both here and for trailing arms) is they are NOT the right shape. Outer face should be chamfered - NOT flat. Without chamfers, the polyflex bushes bind on carrier brackets and I only use them where time is a big factor. I am not a fan of them for this application at all - sorry. If you can get them chamfered on a lathe first, then fine, but otherwise they're total poop out of the box. Cheap mass production without much thought gone into them, thats my view. You can ofcourse make your own.

I agree with this fella on why powerflex bushes are so awful on swing arms: https://www.youtube.com/watch?v=_z6OEohnPKw&t=655s" onclick="window.open(this.href);return false;

The HARD part is getting arm back and aligned with bracket. You need a jack and patience as you're somewhat fighting the rest of the suspension. I had to kick brake disc to move arm in further but if you can get bush and bolt hole fairly close, you can tap the bolt in until you reach other side when you'll have to mess with the jack and a lever as well as turning bolt so it screws through hole on the other side of bracket and you can get nut on. Worked for me anyway.
Roller paint your camper at home: http://roller.epizy.com/55554/" onclick="window.open(this.href);return false; for MP4 download.
Top

Thanks Ralph, I did it at the weekend and drilling the bush is definitely the way to go. Here's a video of my experience:

jamesakers wrote:Thanks Ralph, I did it at the weekend and drilling the bush is definitely the way to go. Here's a video of my experience:

David
the future is unwritten
Top

It is not on my "to do"list. ( haven't even looked )
But if and when the time comes I shall watch this video beforehand.

Replaced mine the other week and the front end feels much better, they didn't even look knackered .
Very easy to make a bush puller out of some threaded rod and a pice of tubing, made life easy.
Check ya nuts
http://forum.club8090.co.uk/viewtopic.php?t=96433" onclick="window.open(this.href);return false;
Auto sleeper fitted with EJ 20 subaru lump
Top
Post Reply
9 posts • Page 1 of 1