Cheers for the writeup Paul.
I'll give it a heave with the molegrips then.
'86 1.9 DG, 4 spd, tintop, camper conversion.
Split case club member.
Top

This is great, thanks for sharing the write up!

I think the bouncy needle syndrome is caused by a rounding of the square hole in the cap, there's a good video from Thomas EXOVCDS which shows how to fix it: https://www.youtube.com/watch?v=_pDzWH0GebQ
Sir Adventure - 1991 Autosleeper Trooper 1.9DG Petrol
https://vwt25.blog/" onclick="window.open(this.href);return false;
Top

Does anyone know if it's possible to buy the rubber sleeve that sits in the hub?
Why would the glass be anything other than half full?

jamesakers wrote:This is great, thanks for sharing the write up!

I think the bouncy needle syndrome is caused by a rounding of the square hole in the cap, there's a good video from Thomas EXOVCDS which shows how to fix it: https://www.youtube.com/watch?v=_pDzWH0GebQ

It can be buy both my vans have had bouncy speedos with nothing wrong with the hole, it was cable dried out, no lubricant, bad cable routing and broken at the speedo
1988 DG WBX LPG Tin Top
1989 DJ digijet WBX Holdsworth Villa 3 Pop Top
itchylinks
Top

what2do wrote:Does anyone know if it's possible to buy the rubber sleeve that sits in the hub?

Yes, it's in the linked products when you look in Brickwerks shop.
'89 Home brew camper, 1.9 petrol twin-slider tin-top
Top

Thanks chaps, it'll be on the next order.
Why would the glass be anything other than half full?

Thanks Itchyfeet; just done the job and your clear instructions really helped.
Are we going on anything else?

Oldiebut goodie wrote:Just had to replace mine yesterday - previous one only lasted around 5 years.


Dunt time fly! I was having a right old moan last year when I had to replace the clutch, surely I'd only just done it a couple of years before? It turned out it was over a decade ago when I last did it.
Are we going on anything else?

At least it gave me an opportunity to weld up the hole in the grease cap and re-square it of as it was starting to wear.
1.6D 2019 VW T-Cross
200hp T6
1̶Y̶ ̶1̶9̶8̶7̶ ̶H̶i̶-̶t̶o̶p̶ ̶C̶a̶r̶a̶v̶e̶l̶l̶e̶
5̶0̶8̶d̶ ̶M̶e̶r̶c̶
Top

Finally got around to having another go at mine today. The cable wasn't seized in the steering knuckle after all, just very very tight. Mole grips and a big screwdriver shifted it eventually. 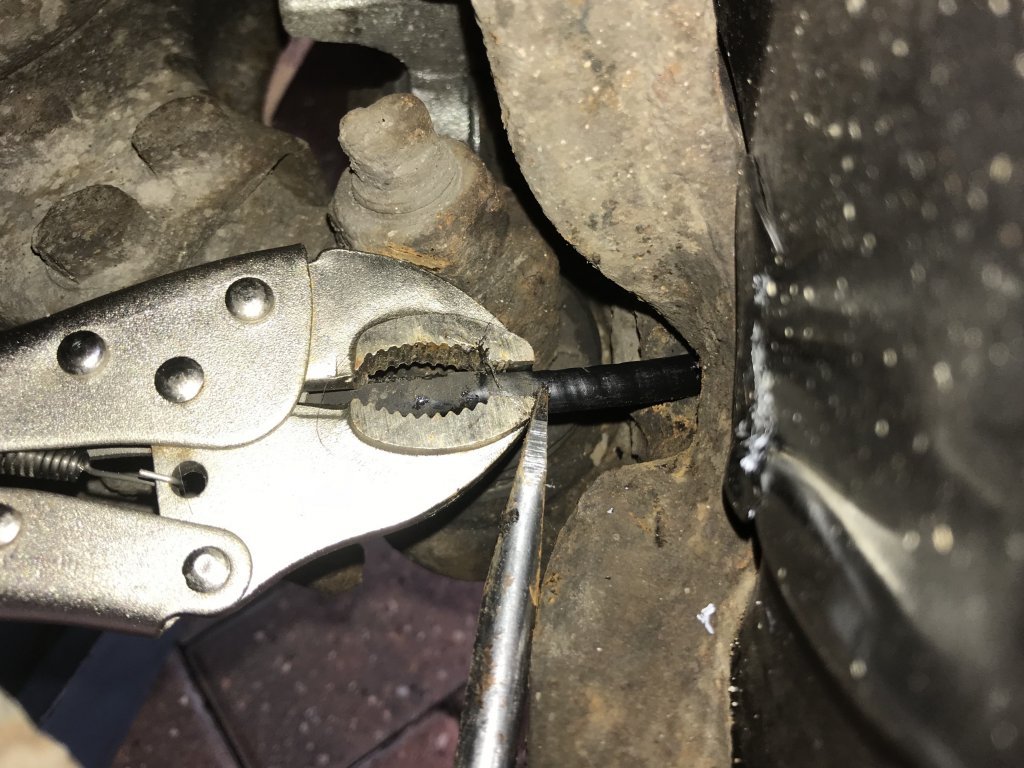 After that the job was easy-peasy. I'd bought a new sleeve for the entry hole in the knuckle, in case I had to destroy the old one, so I fitted it, even though the old one survived. I didn't use the new grommet (which, as others have noted, comes fitted the wrong way round and at the wrong end of the cable), as I've pushed a couple of wires through the old one and didn't fancy having to disconnect them. I followed the Haynes advice to secure the P-clip at a point 740mm from the end of the cable - the new cable didn't come with a mark.

On the road, the van no longer feels like mine! The speedo needle has bounced by +/-5mph at 30-40mph ever since I've had the van, with a corresponding ticking noise. Now it's nice and smooth and quiet. It's still hopelessly inaccurate, but now it's a lot more precise

Really useful guide. I'm considering replacing mine but I'm in the odd situation of having a dodgy speedo that's quite useful!

Speedo is km/h, and noticed shortly after buying the van that the speedo was innaccurate. After checking with GPS app on phone (on many separate occassions at a wide range of speeds), I discovered that the speedo reading is precisely double the current speed in mph. So if the speedo says 60(km), I know I'm doing 30mph. I'm guessing if I replace the cable I'll be stuck with doing km -> m conversions in my head!
1984 converted panel van with 1Y 1900 NA Diesel engine.
Top
Post Reply
38 posts